A House in Order: Advocacy Emergencies are No Match for Minnesota Leader 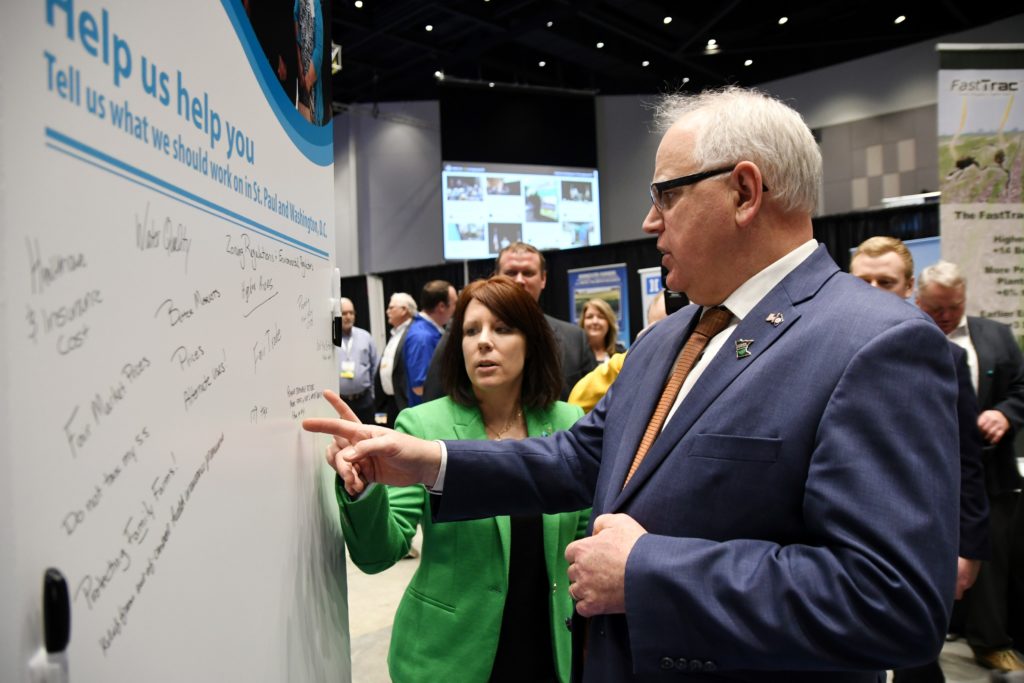 A messy house is the sign of a successful soybean advocate. At least that is what Jamie Beyer jokingly says, even though her farmer husband, Rodd, denies their house is a mess.

“I am able to keep track of all the irons in the fire because my great husband is supportive of what I do. We have three girls who are old enough to make ramen noodles in a pinch, but we make sure we have all the critical times on the calendar covered between the two of us,” said Jamie Beyer, who is current president of the Minnesota Soybean Growers Association (MSGA).

“You have to be flexible and honest about what you can commit to, and we have learned to plug the leaks in the system,” she said. “Having both of our mothers here helps with the girls, also.”

Beyer is not your grandmother’s definition of “farm wife.” She works for the local watershed district. She and Rodd live in town. And she did not grow up on a farm.

“My parents are a plumber and a substitute teacher,” she said. “I have gotten more involved with the farm I married into, but my full-time job lets me help other farmers deal with challenges to their operations. I kind of stepped into my advocacy role more recently.”

In 2015, Beyer said former Gov. Mark Dayton’s Minnesota Buffer Law caught her attention. Calling it outrageous, she and Rodd were fired up and desperate to preserve their “right to farm” for their children. At the time, she felt Minnesota farmers were collectively apathetic about a policy that proposed restrictive rules for buffer strips.

“After it passed, we wanted to get involved with advocacy on future issues,” she added. 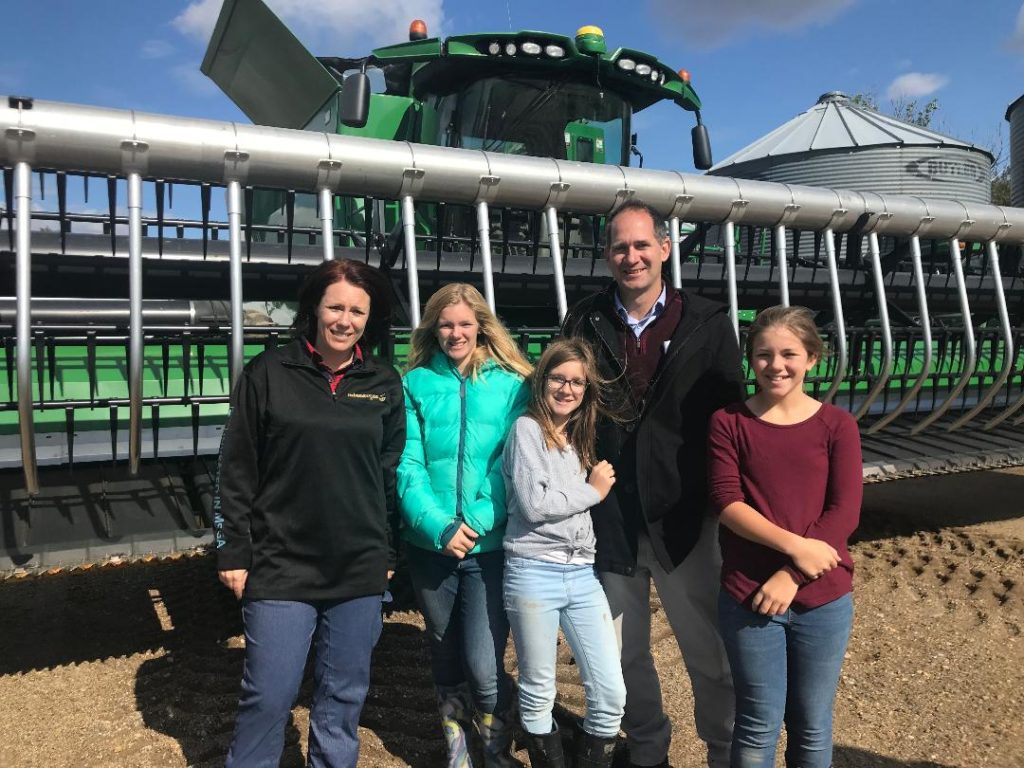 Beyer’s concern over preserving the “right to farm” for her children led her down the path to becoming an active ag advocate and the current Minnesota Soybean Growers Association president. Pictured here are Jamie, with daughters (from left) Aspen, Josie and Paige, and her husband Rodd.

The couple participated in what was then the ASA DuPont Young Leader Program beginning in the fall of 2015. Beyer said she discovered “with enthusiasm” the separate existence of the Minnesota Soybean Growers Association, separate from the commodity checkoff program.

“Since I didn’t come from a farm, Young Leaders taught me how I could advocate and help with the farm. I liked that we could both participate in the program together,” she said.

“It lays the groundwork for other leadership training,” she said. “You meet people from all across the nation. It really is no different than networking with a corporate job.”

Bitten by the advocacy bug, Beyer then participated in ASA’s Syngenta Leadership At Its Best Program and the Bayer Crop Science Ag Communications Team. She supplemented what she was able to glean at the national level by participating in various trainings at the state level.

“Advocacy training pays off,” she said.

In 2018, Minnesota Gov. Mark Dayton introduced a penalty order on buffers that Beyer said would have resulted in thousands of dollars of fines for farmers.

“As soon as I heard about it, I contacted the MSGA office. We issued a press release, and the proposal was repealed within an hour,” she said, noting the press release later won a national media award. “We were able to testify about the penalty and the ridiculousness of it because we had built up our visibility. We were prepared to get the spotlight.” 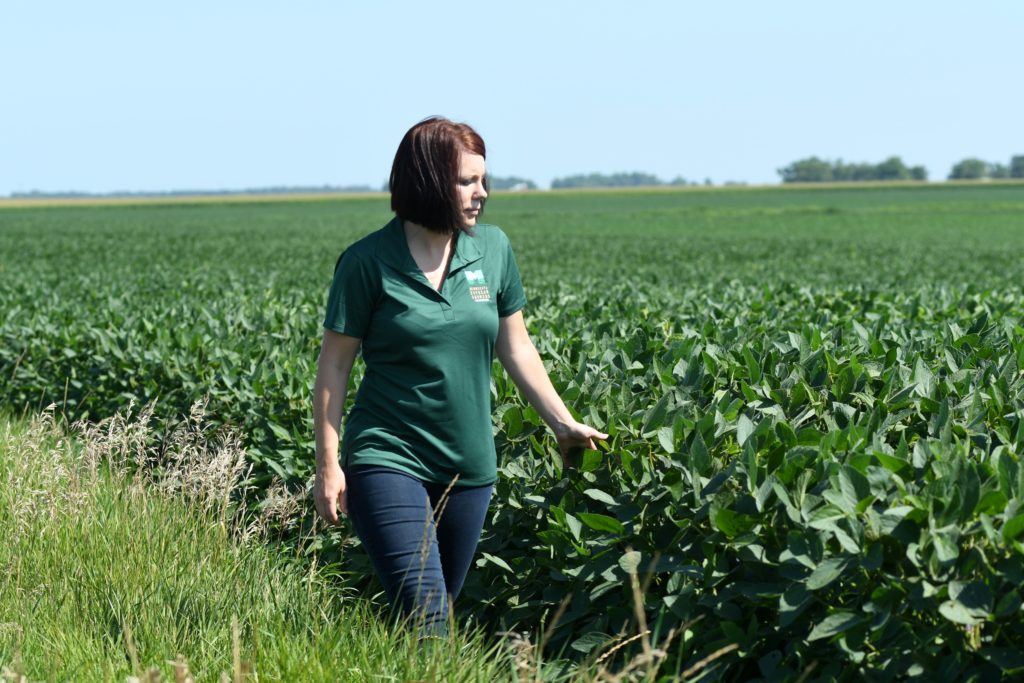 She added that farmers were able to see her testimony in St. Paul because she used Facebook Live to stream the presentation. The speakers before her had done the same, so Beyer was able to watch their presentation on the way to the capitol and adjust her testimony accordingly.

“I didn’t delve into social media until after Young Leaders. The program really pushed me to use those tools,” she said. “It’s good that I use social media, because we live in the least populated county in the state with only 3,500 people. I don’t have an opportunity to just run into people. Social media levels the playing field and helps our farm reach more people.”

With social media, Beyer acknowledges she needed to be open to learning. She took the time to put together a network of farmers she can quickly contact when the association wants to get a message out to legislators quickly and effectively. She uses Twitter both to watch what farmers are talking about and to add her thoughts to critical discussions. She tracks legislators, scientists and environmental extremist Tweets for background and research.

“I also listen to podcasts so I can connect with specific people and follow their ideas,” she said. “In fact, through one podcast I discovered a research report that many water quality experts didn’t know about and we were able to use the information. You never know what you may find.”

Beyer’s term as MSGA president ends in July, but she won’t be throwing in the advocacy towel so soon. She plans to continue engaging with lawmakers in session and be involved with ASA.

“One thing I have learned, is that as one opportunity ends another seems to be waiting for me,” she said. “I enjoy going to all of the commodity and farm group meetings. They each have their own unique culture. I like the soybean groups because they are scrappy and lean.”

As she looks to the future, Beyer hopes more young people will get involved with advocacy. She encourages farm groups to offer more husband/wife opportunities and family friendly events.

“We need to be more inclusive. People today, especially parents with young children, seem to have less time to be parents with all of their daily demands. We should include family activities,” she said.

And that messy house? Well, maybe it will just clean itself.