A Year of Trade, Trump and Tariffs 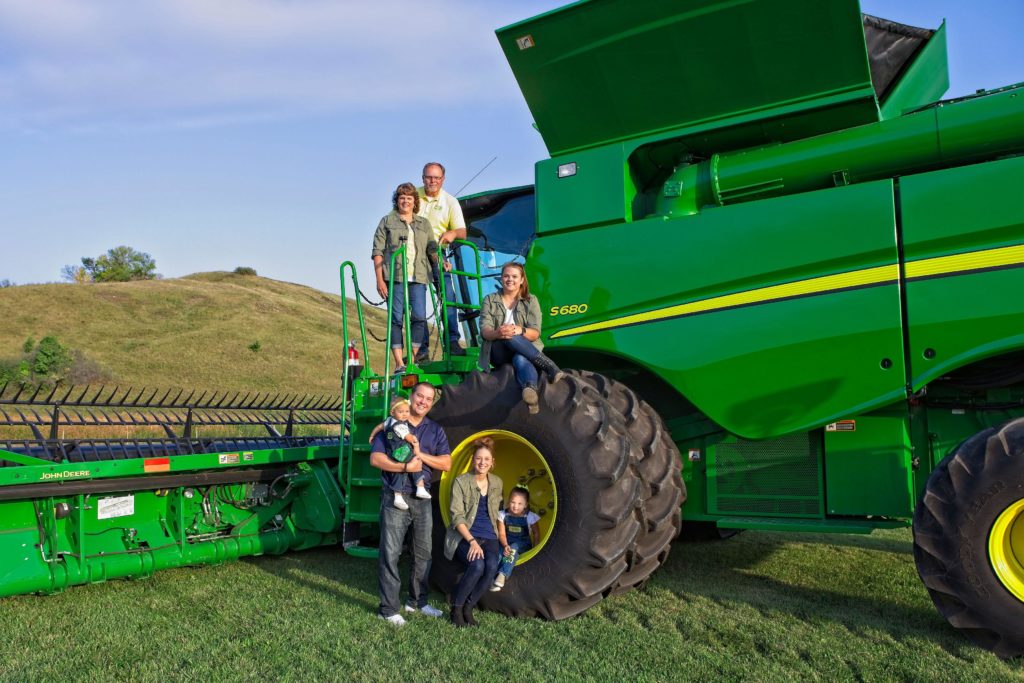 As the trade war between the U.S. and China escalates, farm families like the Petersons (pictured) in North Dakota say they are renewing their focus—and there’s no room for mistakes. Photo Credit: Monte Peterson

July 6 marked the anniversary of U.S.-China retaliatory trade tariffs being implemented, and soybean farmers are increasingly frustrated by the negative impact the situation has had on their farms and on the industry. Yet, many still opt to see a bright side, especially if a resolution comes sooner rather than later and they are able to hang on financially through 2019.

President Donald Trump imposed a 25% duty on $50 billion worth of Chinese goods a year ago, and shortly thereafter, a 10% duty on $200 billion more, resulting in China placing retaliatory tariffs on U.S. goods in kind for each instance. After no movement in negotiations, the Trump Administration in May 2019 increased tariffs on the $200 billion in Chinese goods from 10 to 25% to add pressure on China to make changes to its economic policies. The U.S. plans a 25% tariff on the remaining $325 billion in annual imports from China. China has, of course, responded with its own retaliatory tariff intentions.

“We would like to see these tariffs rescinded and get back to free and open trade sooner rather than later,” said Davie Stephens, a farmer from Clinton, Kentucky, and ASA president. “Soybean farmers have been hit hard at a time when the farm economy was already down. We have lost about $2 per bushel, and we want to get this resolved and be able to lock in a profit on our crops.”

While the overall impact on U.S. soybean farmer profitability has been dire, it affects individual farmers in different ways. Here is a look at how farmers are coping around the country:

Rippey, Iowa, farmer Tim Bardole would love to maintain a 50-50 corn and soybean rotation. But this year, the Bardoles’ planted acreage breakdown is 65% corn, 35% soybeans.

“We lose $100 per soybean acre as opposed to corn with current prices, and that is not sustainable. I hope it will change, but right now we just have to put a pencil to it to make the banker happy. We also have to weigh the economics with maintaining soil health with our rotation,” he said.

Bardole farms with his dad Roy, brother Peter and son Schyler. The three-generation farm is expanding to include two hog barns to provide an income stream for Schyler.

“He is entering farming at a time when he hasn’t seen any profitability, and the trade issue of the last year has hurt that,” Bardole said. “The soybean market is feeling the impact of the loss of China trade. It is a big problem if we lose this young generation of farmers because of it.” 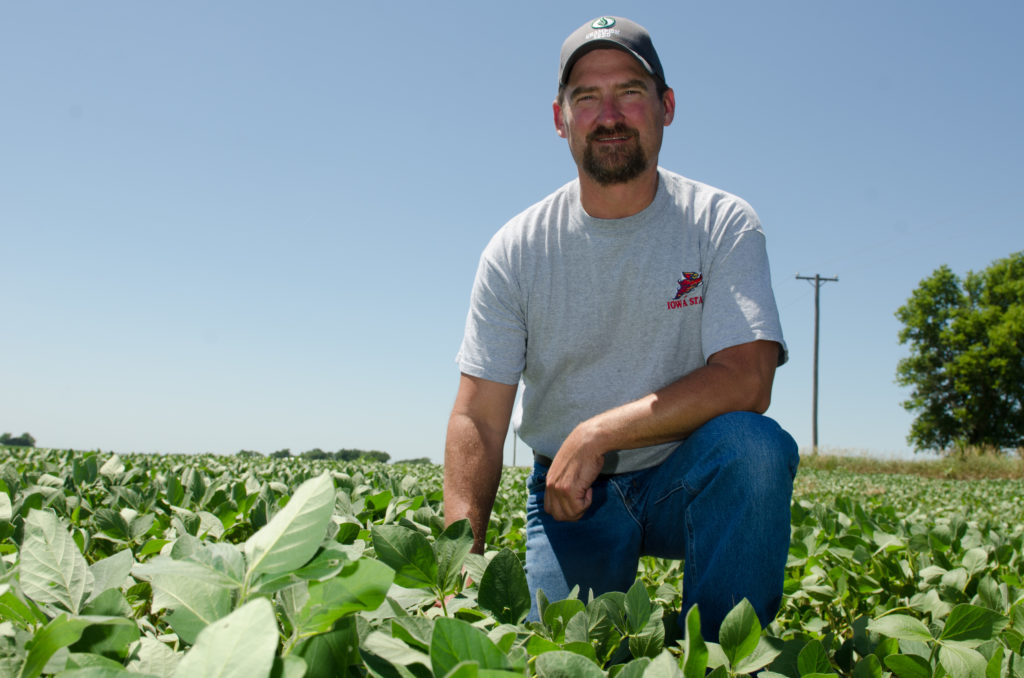 Iowa soybean grower Tim Bardole says the trade war will have a long-lasting impact on selling to China, but one spot on the horizon is USSEC’s work to constantly build and maintain new foreign markets for U.S. soy. Photo Credit: Joseph L. Murphy/Iowa Soybean Association

While Bardole says there is no question China’s departure from the soybean market has had a huge impact, he is encouraged by what he heard while in China in March.

“Buyers want a resolution. They need U.S. soybeans,” he said. “But the trade dispute will have a long-ranging effect as to what we can sell into China unless there is a soybean crop disaster in Brazil. If an agreement can be reached, it will be of long-term value to U.S. soybean farmers.”

The Bright Side: Bardole said the U.S. Soybean Export Council (USSEC) is presently working in overdrive, nurturing new markets that will make the soybean industry stronger for the future.

“This strategy may have been a longer time coming without the China situation,” he said. “The majority of U.S. farmers understand we all live and die by trade. I still have hope the U.S. will fix these issues, but we have had to deal with more than one black eye in the process.”

No room for mistakes

Monte Peterson of Valley City, North Dakota, received $9.48 per bushel for his soybeans a year ago. Today, his price is $7.30, and exports from the Pacific Northwest (PNW) are minimal.

“Cash flow is tighter. We have had to make a renewed focus on covering our bases and farming as affordably and as efficiently as we can,” Peterson said. “There is no room for mistakes. We are keeping our rotations the same to maximize resources and try to attain some profitability.”

Peterson farms with his wife Penny, raising corn and soybeans. He is a fourth-generation farmer, having been in business since 1980, and relies on west coast business to support his basis.

“This has been a roller coaster year with tariff retaliations from China,” he said. “We had several weeks last year with absolutely no exports from the Pacific Northwest. Then we had about 16 weeks of sales, and now we are back to nothing.”

While Peterson considers trade negotiations a disruption to the system, he said farmers should be prepared to take advantage of making sales at better prices when business returns.

The Bright Side: Peterson is focused on global population growth and greater protein demand.

“The U.S. is expanding into nontraditional markets. I am grateful we are gaining some share in other countries to absorb our excessive soybean stocks, even though we miss our main customer,” he said. “We need to be persistent in growing a quality crop so customers have a preference for U.S. soybeans and never lose sight of that. We may not have the lowest price, but we should have the best quality. We cannot leave any stone unturned in building new markets.”

Focused on the future

Ryan Bivens is not happy about the current trade war either, but as a young, first-generation producer he believes in the philosophy behind his operation, Fresh Start Farms. Bivens and his wife Misty farm near Hodgenville, Kentucky, and support four full-time employees. They raise about 7,500 acres of corn, soybeans and wheat.

“I have supported this Administration’s decisions since the beginning and try to remain optimistic. There is nothing wrong with initiating talks to try to improve trade between the U.S. and China, but I am increasingly concerned that a year has passed with no outcome,” he said

Like other producers around the country, Bivens is dealing with the same low price and profitability issues, and he notes that it prolongs what was already a soft farm economy. 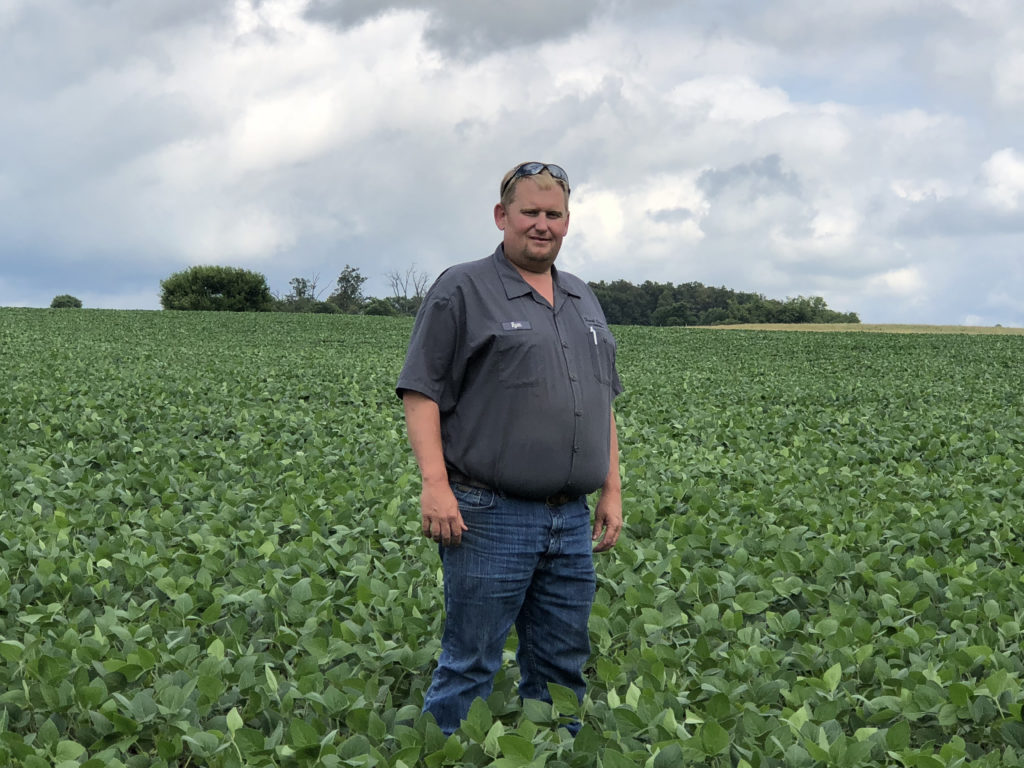 “We stayed with our same rotation this year to maintain our agronomics and land management strategies,” he said. “But the situation is serious. We see a negative impact not only on our income, but also a double-whammy with higher input costs. Some of our pesticides come from China and are affected by this. Bottom line, it is taking more of our money to farm in 2019.”

Bivens believes that without a resolution soon, the state of the ag economy could quickly get even uglier. He did not farm during the grain embargo of the 1980s but said the current situation could get even worse. Today’s farmers have higher risk exposure with larger farms and investment.

The Bright Side: “We have an opportunity to pick up market share from other countries while South America supplies China. Maybe this is a lesson for U.S. farmers to not put all our eggs in one customer’s basket,” Bivens said. “There is still demand for U.S. soybeans, and I am confident we will get China back. We are just one global weather disaster away from higher prices.”

Stan Usery, Jr., decided to forego full-season soybeans this year because of too much market uncertainty. Instead, the Elkmont, Alabama, farmer and his dad are raising more cotton, along with corn, winter wheat and double-crop soybeans. They also raise poultry on contract for a large company.

“With the escalation in tariffs this spring, we had to shift acres,” he said. “There is no crop we produce that hasn’t been affected by the tariffs, but I can’t grow soybeans profitably when the price falls below $9.00 per bushel. There is way more uncertainty now than a year ago.”

Usery was able to manage 2018 financially because he had a good portion of his anticipated production forward-contracted before the trade war began. The same pricing opportunities have not materialized for his 2019 production, and he is concerned about farm income for the year.

“I have tried to remain patient and hopeful for a resolution, but that was shattered in May with the escalation of the tariffs by the U.S. and retaliation by China,” he said. “Who knows what will happen next? Soybeans for us are the least attractive crop to grow, economically speaking.”

Usery hopes trade associations, including ASA, will keep pressure on the administration for a resolution soon. While the Market Facilitation Program (MFP) provided partial relief in 2018, and will again in 2019, he does not support supply controls as the answer.

The Bright Side: “I just want to get back to farming on sunny, warm days that hopefully will generate positive energy—and news to help all of us replace this trade uncertainty,” he said.

U.S. soybean farmers said they will keep close watch on the trade situation into harvest, noting some financial stress may be relieved through the second Market Facilitation Program announced by the administration this spring. While this offers short-term relief, ASA emphasizes that U.S. soy growers still need long-term solutions and continues to urge the administration to restore market stability by rapidly concluding negotiations with China and lifting Section 301 tariffs in exchange for China removing its retaliatory 25% tariff on U.S. soybeans.