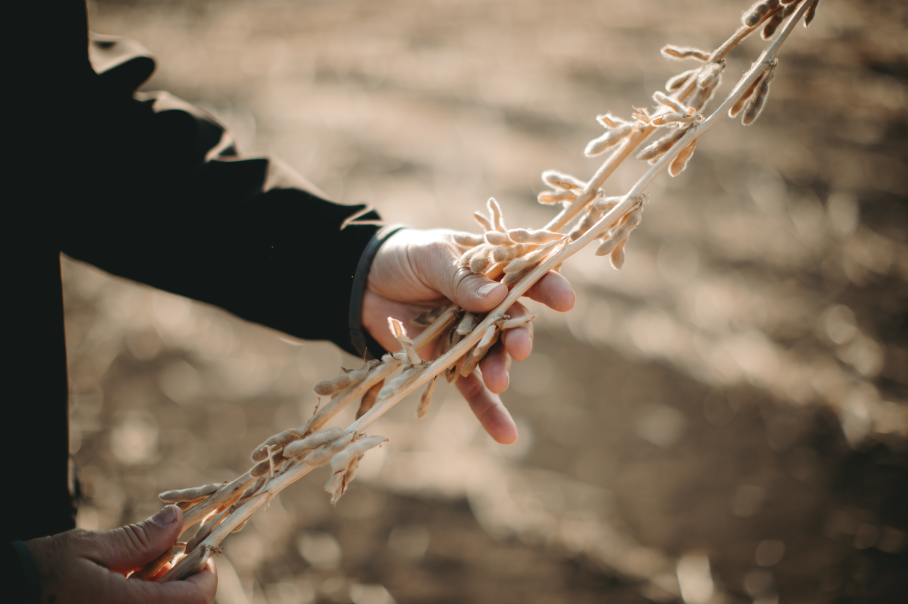 “Improvise, adapt, overcome,” may be a phrase straight from a Clint Eastwood action movie, but the words aptly describe how the American Soybean Association (ASA) approached its mission during the upheaval caused by the global coronavirus pandemic.

ASA has advocated for soy for 100 years. Remaining effective in supporting soybean farmers and the soybean industry for a century requires agility and flexibility. COVID-19 presented another opportunity for the organization to demonstrate its adaptability during unforeseen circumstances.

When the realities of the COVID-19 outbreak disrupted many aspects of life in the early spring of 2020, American soybean farmers were in the process of preparing to plant the year’s crops. Suddenly the future of that crop, along with life in the United States, was thrown into disarray as farmers and others grappled with the uncertainties of the virus and the associated fallout. Businesses and restaurants closed or had their operations restricted, livestock processing plants were shut down, stay at home orders were issued. It quickly became clear that there would be no business as usual in 2020.

ASA quickly recognized the need to assess how COVID-19 was affecting farmers and formed a 12-member task force to gather input from farmers around the country on various ways the coronavirus could potentially impact their operations. The ASA COVID Task Force consisted of representation from ASA’s farmer-leaders and senior staff, and the policy group also knew it was important that sister organizations the United Soybean Board (USB) and the U.S. Soybean Export Council (USSEC) also have a member.

South Dakota farmer Kevin Scott, then ASA vice president, and chair of the COVID-19 task force says many farmers were initially concerned with the availability of inputs, including fertilizer and farm chemicals. A significant amount of fertilizer comes from Canada, so growers were worried border closings would restrict availability. Farmers also wondered whether local co-ops or farm service organizations could even come out and apply those inputs. Labor availability and even visa concerns for migrant workers also posed potential disruptions to farmers.

“We wanted to find out from across the country if there were problems, where those problems were, and what we as ASA could do to stay involved,” Scott says. “Overall, supply chain issues were a big concern.”

A major coronavirus-related disruption came in the food and livestock sectors. Temporary shutdowns at several major meat packing plants due to COVID-19 outbreaks and concern for worker safety forced some farmers to euthanize hogs and poultry because there was no processing capacity.

“Food security was a big issue. There was no lack of food, we were destroying food because we couldn’t get where it needed to be,” Scott says. “We as ASA worked to keep things moving in the right direction because dead hogs or dead chickens don’t eat much soybean meal.”

“We have developed a system that is so streamlined and efficient—and so reliant on the productivity of the farmer and the plant—that any disruption really throws a monkey wrench and a subsequent change that is not easy to adjust to,” Gordon says. “We’re delivering pigs or chickens every day and harvesting those animals. When you have to shut down a plant unexpectedly for an extended period of time, there’s no place to go with those animals. The system behind it is so set up to operate on efficiency that we can’t detour.”

Soy industry leaders did more than just gather input, they used that knowledge to urge the Trump Administration and others to make sure agriculture was deemed essential.

“ASA impressed upon the secretary of agriculture and others involved that these industries are critical and that we had to keep them running,” Scott explains. “We pushed pretty hard on USDA to make sure that we, as well as all of our suppliers, were deemed essential.”

Scott says ASA advocacy extended beyond making sure farmers could get products to their farms and included making sure growers could access open marketing channels.

“We export a lot of soybeans, so we’ve got to keep the rail running, the trucks running, and the port systems functioning,” Scott adds.

Scott says ASA pushed Congress and the Administration to support the Coronavirus Food Assistance Programs that delivered much needed relief to farmers and agribusinesses harmed by the COVID-19 outbreak.

COVID-19 not only disrupted soybean production on the farm, but the coronavirus outbreak also changed how ASA could advocate for the nation’s soybean farmers. As a policy-driven organization, ASA staff and farmer-leaders have frequented Capitol Hill to cultivate relationships and speak on behalf of the nation’s soybean farmers for over a century. COVID-19 safety protocols shut down most in-person contact with Administration, U.S. House and Senate members and staff.

“Pre-COVID, we were walking freely into and out of House and Senate office buildings all throughout the day, on any given day,” says ASA Executive Director of Government Affairs Christy Seyfert. “It was normal for us to do in-person meetings on a regular basis. Then COVID hit and that changed everything.”

ASA staff and leaders had to adjust to the new reality and get creative with their outreach efforts. One answer came through technology. 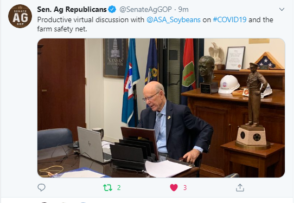 Seyfert says ASA staff and leaders participated in well over 60 virtual events in support of members. Lunch meetings and even fundraisers that were typically held in person moved to video conferencing or other virtual platforms.

“We had to adapt in many ways to make sure that ASA remains visible and that our message is heard loud and clear,” Seyfert says.

“The benefit of having all those years of going to the Hill and being out in Washington D.C., was we had relationships with the staffers, the representatives and senators, as well as USDA and the EPA,” Gordon explains. “Because Washington is basically shut down, we’re doing an enormous amount of phone calls and using the video conferencing technology. That has allowed us to maintain that face-to-face interaction and continue to advocate for the U.S. soybean farmer.”

Taking the farm to the Hill

Because farmers could no longer physically go to Washington to visit with lawmakers, ASA brought the farm to the Hill through an innovative #SeeSoyHarvest campaign. The effort featured videos captured by soybean farmers from around the country during harvest. Videos documented the 2020 harvest progress and delivered key statistics and information related to ASA priority issues. A series of six videos addressed the farm economy, trade concerns, infrastructure needs including transportation and rural broadband, biodiesel, as well as biotechnology and crop protection products—and thanked members of Congress for the important, ongoing relationships with ASA. 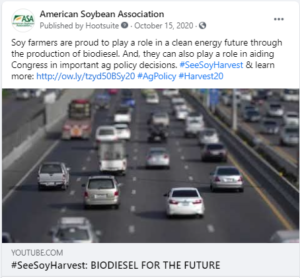 In addition to being available through social media, Seyfert says each of the six #SeeSoyHarvest videos was shared strategically with over 2,000 congressional staff members. The ASA team also conducted targeted outreach with delegation offices that had growers featured in each video.

“Farmer engagement made the #SeeSoyHarvest effort possible,” Seyfert says. “We wouldn’t have been able to build that campaign or carry those messages to the Hill as effectively if the growers hadn’t hit the pause button on their day and captured those videos that we could leverage, marry with our priority messages and send up to the Hill.”

Seyfert says the videos generated a tremendous amount of positive feedback from congressional staffers and legislators alike. One of the first responses Seyfert received during the campaign was from a lawmaker who said they could practically smell the harvest through their computer screen. Seyfert was encouraged to keep the videos coming.

“That’s what you want to hear from the policymakers and staffers you’re trying to share your messages with,” Seyfert contends.

ASA also distributed the videos to key figures within the Administration. And state soybean organizations shared the videos with their legislative delegations.

“From a government affairs standpoint,” Seyfert says, “I just appreciate that we have been able to advocate for our growers despite all the challenges and that our growers were able to turn to us for effective representation.”

Wendy Brannen, ASA’s Senior Director of Marketing and Communications, said the #SeeSoyHarvest campaign numbers support what ASA can accomplish during challenging times. Engagements, or the likes, clicks, watches, and shares, on ASA Facebook, Twitter and YouTube were right at 7,000, with the six videos having almost 400 views each—well above the organization’s average video views.

“Christy and her team were able to utilize the topical videos as a platform for touching base with more than 100 Congressional offices, and they made an incredible 400 direct follow-ups on the heels of that great harvest footage being distributed through email. The pandemic did not slow them down a beat!” says Brannen.

As the ASA COVID-19 task force gathered information on farmer concerns, it became readily apparent that stress and mental health issues were increasing in the countryside. Uncertainty over coronavirus impacts piled on top of existing farm-related financial stress following several challenging years in agriculture was taking its toll on many farmers.

“We could see it on our COVID video conference calls,” Scott recalls. “We had people who were stressed beyond what they should have been. I would watch facial expressions and could tell the situation was weighing on them and that things were scarier than they should have been. But, when you cannot go to funerals, or you have to put off a wedding because of COVID, that’s tough stuff. It puts a lot of stress on the normal life.” 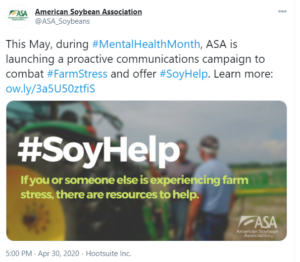 ASA recognized the need and developed the #SoyHelp effort to share information and resources with people who were under stress. The campaign provided links to mental health resources, including suicide hotlines and crisis centers. Agriculture-specific resources were also made available, along with COVID-19-specific resources.

ASA conducted a #SoyHelp webinar as part of Farm Journal’s Field Day in August and continues to pursue opportunities to share resources for seeking help and dissolve lingering stigmas related to farm stress, including an upcoming cosponsored learning session at the now-virtual Commodity Classic.

Links to the #SoyHelp resources, including resources broken out by each state, are now permanently available on the ASA website at soygrowers.com.

A new way of doing business

Some changes necessitated by COVID-19 may be here to stay. Scott says as video conferencing is used more routinely, more meetings may take place virtually. The technology can be used for ASA meetings, interaction with overseas customers, even connecting with lawmakers in Washington D.C. Increased use of technology, including webinars to deliver vital information to farmers is also likely in the future.

Recently, ASA partnered with USB on a series of free webinars promoted with trade media that addressed key issues including rural broadband, trade and market development, and infrastructure needs. Those virtual events drew participants—including new audiences for ASA—from across the nation. 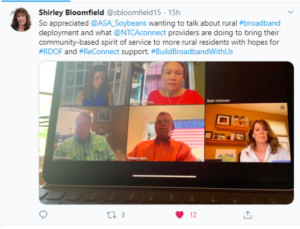 ASA leaders say the organization will continue to be creative in meeting the organization’s mission of advocating for the nation’s soybean farmers. Additional challenges are presented by building connections to a new administration, as well as working with new members of key congressional committees.

Gordon says the changes brought about by COVID-19 are impacting how ASA is delivering on the organization’s mission. But, he says, the commitment to speaking up for American soybean farmers will not waver.

“It pays tribute to a great staff and the farmer-leaders on the ASA board who show their leadership and true grit,” Gordon says. “When things change, these farmer-leaders don’t just sit back and lament what they can’t do anymore, they pivot into different opportunities so we can focus on the next problem. It doesn’t matter how we get there; the key is still to reach our goal.”