By Will Rodger •  From Fall 2021 American Soybean magazine 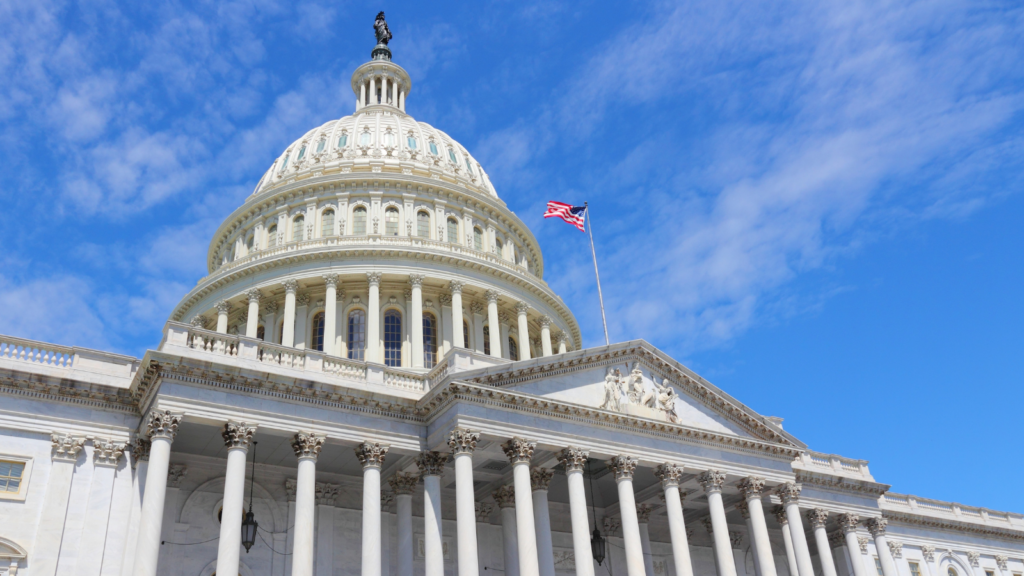 Federal farm policy, too often, is a mystery to most.

Rules, regulations, laws and court rulings seemingly emerge from nowhere and—some years—come at a pace that make the head spin and stomach lurch.

Behind the scenes, however, there is order and, for those who dare to get involved, influence that keeps America’s soybean growers thriving. At the American Soybean Association, it starts and ends with the grassroots.

Much of the action takes place in ASA’s policy advocacy teams, which are comprised of ASA board members who farm soybeans across the growing region. ASA Executive Director of Government Affairs Christy Seyfert oversees the association’s Washington staff liaisons, who each serve an advocacy team, and she also serves as the liaison to the Farm Policy advocacy team.

ASA maintains a watchful eye on all three branches of the federal government. Whether it’s taxation—currently a front-burner issue—or other issues such as infrastructure, biotech, crop protection, WOTUS, the farm bill, or the all-important livestock markets—ASA is on top of it.

No matter what the topic, Seyfert says, team members work together to coordinate on everything that happens in our nation’s capital. Consensus drives decisions. 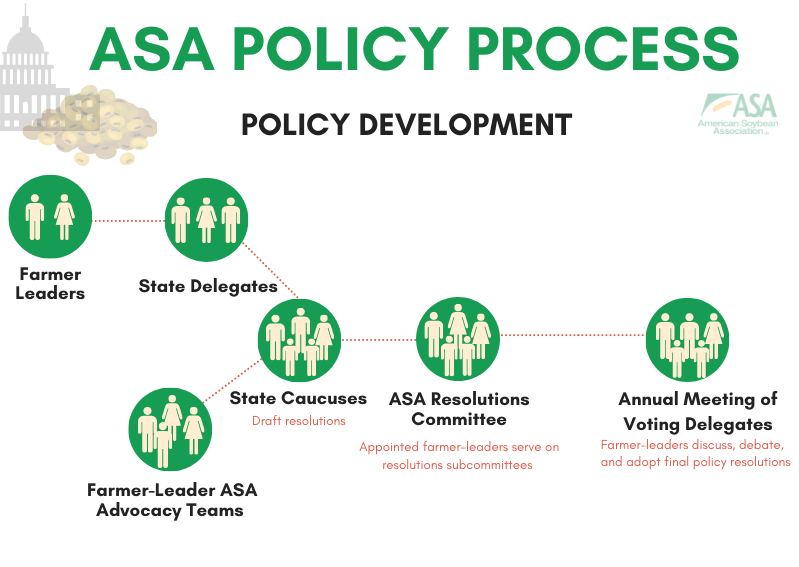 The ASA policy book—formally known as the ASA Directory & Resolutions—sets the course for the coming 12 months. ASA board and staff, state soybean associations and individual growers participate in multiple rounds of meetings that annually produce a single voice for growers everywhere in the United States. Discussions begin at the top of the new year and culminate when ASA meets at the Commodity Classic trade and educational show.

“Think of it as a two-track process,” Seyfert says. “On one hand, you have the five advocacy teams poring over our current policy resolutions book with a fine-toothed comb. Those advocacy teams identify areas that may need updates, that may be outdated due to policy changes in Washington.

“Meantime, states are doing the same thing at generally the same time. In the upcoming resolutions process, recommended policy changes by advocacy teams and states are due February 1, so January will be a full month of discussions about potential ASA policy changes. Throughout the month of February, there will be opportunities to review policies, and ASA will ultimately consider and vote on policy changes at Commodity Classic in March.”

The work doesn’t stop with the resolutions process for ASA’s advocacy teams.

“Those teams produce a lot of the work that gets done throughout the year, and regular advocacy team meetings occur in conjunction with our quarterly board meetings,” Seyfert says. “At the same time, we also have the flexibility to schedule advocacy team meetings as needed so that we can be nimble and responsive when policy issues arise.

“That flexibility matters because, in the end, nothing stands still in Washington. That is when we need to improvise while remaining true to the principles laid out each year in our policy book.”

With a word count of more than 28,000, the policy book covers every major interaction between government and soybeans a grower could think of—from trade to data protection, and from property rights to the environment.

The commitment and individuality among advocacy teams make for especially effective lobbying, says Combelic, who also serves as ASA director of government affairs. The teams include grower-leaders who serve in crucial advisory roles on ASA teams and boards.

“These groups have a specialized focus on a handful of issues, which allows them to get that deeper dive and follow an issue over the year,” she says. “We, as staff, provide our recommendations, and they, in turn, really guide us and tell us how it's going to impact them.

“All of this empowers us to come back to the Hill, take their voice and amplify it. And the best way to do that is to have them talking to members of Congress,” Combelic says. “What's great about grower groups that are this big is that everyone in soy country has constituents who are impacted by issues we care about. And that is the thing that is most powerful: hearing from your constituents.”

Combelic says ASA’s Washington portfolios ensure that everyone involved has all the time and information needed to demonstrate real expertise in the topics they cover. This means ASA can be timely and responsive to issues as they arise.

Full transparency and consistency in approach mean there are no surprises, whether ASA is signing on to letters or endorsing legislation.

“We have to have a highly responsive group of board members who look out for our requests for help, whether it’s through participation in meetings or for other needs. We really appreciate that opportunity to gather feedback and work closely with these members,” Combelic says. 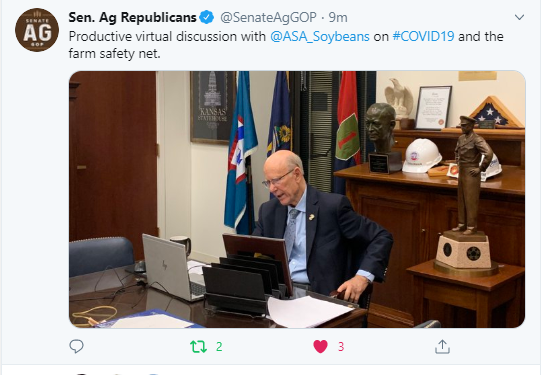 COVID-19 played havoc with schedules in 2020 and 2021, but ASA managed to stay on track with what matters, ASA staffers say. Some things have even improved.

‘We used to run advocacy team events largely in person alongside board meetings, but we would also hold them by phone as needed,” Seyfert says. “COVID, surprisingly, introduced us to—and gave us a comfort level with—virtual technology, which is a real improvement over conference calls.

“We had such a great experience with our advocacy team meetings being held virtually in advance of board meetings, and with broader participation, that we’ve decided to maintain this approach for the foreseeable future. That virtual capability also helps a great deal with the annual policy resolutions process.

“Screen sharing is particularly helpful when you are trying to modify resolutions and reach agreement on proposals,” she adds. “So that technology has been helpful to us.”

She says it’s difficult to overstate the importance of collaboration, especially with grassroots members. “One thing that I learned on the Hill many, many years ago is that policy drives behavior. So, as we think about policy development within ASA, as we think about policy on the Hill, we have to think long term: ‘What behavior are we driving?’ ‘What behavior by our farmers and by others are we encouraging when we support certain policies?’

“That's critically important as we think ahead to the next farm bill,” she adds.

ASA recently embarked on a series of educational sessions for farmers as the organization begins preparation for farm bill feedback later this year. Questions Seyfert expects to arise in the next farm bill: Should the federal government continue to encourage crop insurance participation, or should we look at permanent disaster programs for farmers? What's better? A risk management program that farmers must pay into, one that is a current success; or one that is a freebie that the federal government fully funds? Of course, keeping in mind that the adopted policy will drive farmer behavior.

“ASA’s process is grassroots-driven, and we're a better organization because of that.” 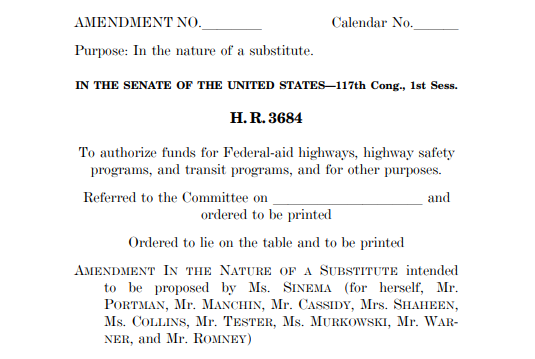 The bipartisan infrastructure package (H.R. 3684) makes historic investments across all aspects of our nation’s infrastructure, including roads, bridges, waterways and railroads, which are all critical to farmers.

As discussions continue on the multi-trillion-dollar reconciliation bill, ASA team members keep their ears to the ground to ensure they have all the latest information on possible points of interest or concern. This was especially critical this year.

“Reconciliation has been used by Republicans and Democrats since it was first introduced in 1980,” Seyfert says. “What's different about this year is tapping the reconciliation process twice to advance legislation in an expedited manner.

“The reconciliation process has put the president’s agenda on a fast track,” she says. “That means we have to stay plugged in to contacts on both sides of the aisle because it is extremely fluid. Extremely fluid. We had so many uncertainties. Because of COVID, we were having to plug in with every contact possible and weigh in as much as possible to advance our priorities amid an ever-evolving environment, and that has continued with the reconciliation processes.”

D.C. insiders routinely praise congressional agriculture committees for their collegiality and strong bipartisanship. For many, that easygoing nature has sadly begun to fray as partisanship has risen on Capitol Hill. The changes have made many wary, while the process of budget reconciliation has only raised the policy stakes.

But Seyfert affirms bipartisanship is still alive in the House and Senate ag committees—on some issues. “We’ve seen real collaboration throughout Senate confirmations, as well as in House broadband legislation,” she says. “But we can already feel the onward sprint toward the next election in November 2022.”

No matter the results of the next midterm elections, she says, “People know who ASA is: a bipartisan, constructive participant in agricultural policy. And we're going to be that no matter who's in charge.

“We have a bipartisan D.C. team and a bipartisan membership, so we want to make sure that we are working constructively with both sides of the aisle and the administration.”

In the end, Seyfert says, collaboration and communication up, down and across the association gets things done.

“We don't have all the answers in Washington by any means. Our relationships with board members and states are vital to everything we do,” she says. “We on staff can do direct lobbyist advocacy, but states and individual members are weighing in with emails, with phone calls, with farm visits, meetings with congressional policy makers—connections that are so important to the overall policymaking process.

The Basics: How Does a Bill Become a Law?

Laws take shape from ideas gathered by lawmakers listening to the needs and concerns of their constituents through, for example, Hill visits, events, letters, or messages sent through a portal like ASA’s Soy Action Center. This is why ASA’s advocacy is so critical: it gets the grassroots needs of our soy industry a seat at the table where ideas can become law.

Once a lawmaker has an idea, they will work with their staff to draft and sponsor a bill. A bill can be introduced in either chamber of Congress by a senator or representative who sponsors it, with some bills sponsored by more than one legislator. When a bill is introduced, it is assigned to a committee that will research, discuss, and make changes to the bill.

Next, the bill is put before that chamber for a vote. If it passes one body of Congress, it will go through a similar process of research, discussion, changes and voting within the other body.

Once both bodies vote to accept a bill, they must work out any differences between the two versions and vote on the same exact bill. If both bodies of Congress pass the bill, it then moves to the president’s desk to be signed into law or vetoed.

If the president chooses to veto or otherwise not approve a bill, Congress has the authority to override the veto, which means the bill then becomes a law.