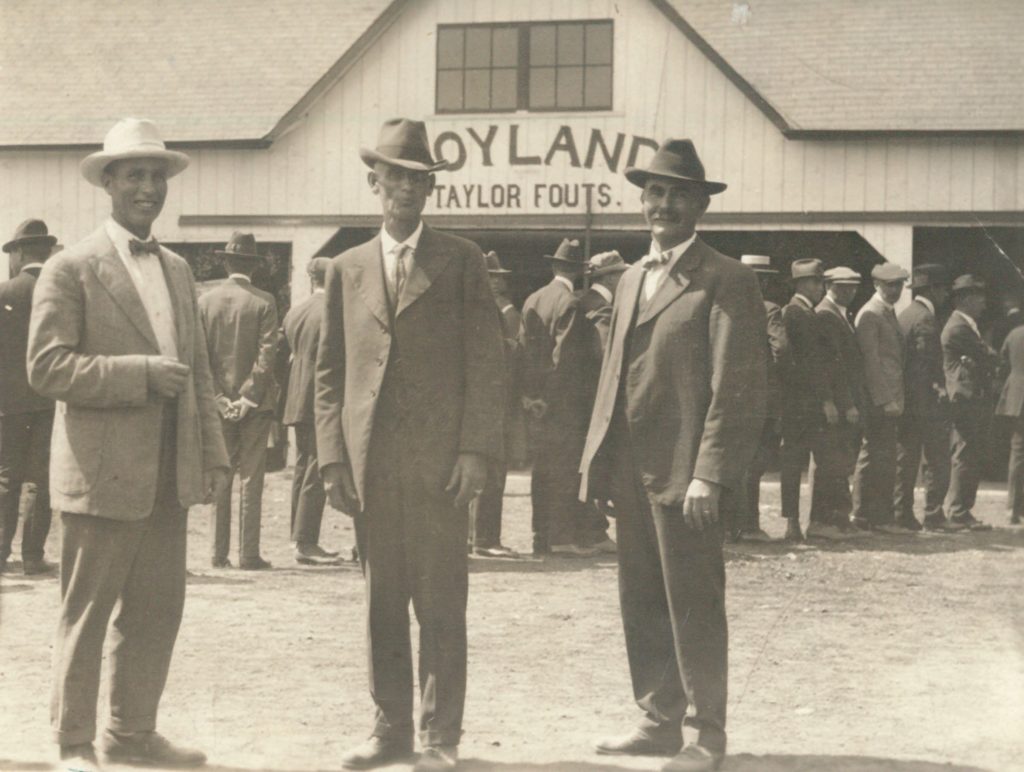 The three Fouts Brothers, (left to right) Taylor, Finis and Noah, at Soyland Farm during the first Corn Belt Soybean Field Day, Sept. 3, 1920 in Camden, Ind., the birthplace of the American Soybean Association.

Taylor Fouts of Camden, Ind., began growing soybeans in the early 1900s. By 1907 he was proud of having 200 bushels of seed beans, which he characterized as a “unique possession.”

Taylor Fouts, along with his two older brothers, Finis and Noah, continued to focus on soybean production. The Fouts Brothers’ commitment to soybeans was so strong that they changed the name of their farm to “Soyland” in 1918.

With the general popularity of soybeans growing in the Midwest it was an opportune time in 1920 to hold a regional soybean conference. Organizers wanted the conference to be held on a farm with soybean experience and the ability to demonstrate growing and utilizing the crop. Soyland farm was the perfect location. Sponsors included Purdue University agriculture staff, county agents, agronomy departments of neighboring states and the U.S. Department of Agriculture crop specialist.

That first “Corn Belt Soybean Field Day” was held September 3, 1920 at the Fouts Brothers’ Soyland farm. More than 1,000 people from six states attended. While at the event, participants identified the need for an organization to promote soybeans and increase profit opportunities. The National Soybean Growers Association was founded and site host, Taylor Fouts, was elected president of the new organization.

In 1925, the National Soybean Growers Association name changed to American Soybean Association (ASA). Leaders believed the name change better represented future aspirations for developing the organization and the new crop into a major contender within agriculture.

In early policy activity, ASA celebrated a major legislative victory when its work helped get a tariff levied on low cost imported soybean cake and meal in 1928. In 1930, ASA helped enact a stronger protective tariff for soybeans, soy oil and soy meal. In the 1940s, ASA opposed government efforts to reduce soybean production and restrict exports.

In 1940, with the association needing to take a next step in growth, ASA hired 29-year-old ASA director George Strayer from Hudson, Iowa for a part-time position as executive secretary of the association. This was ASA’s first paid position, and it established Hudson, Iowa as ASA’s headquarters. 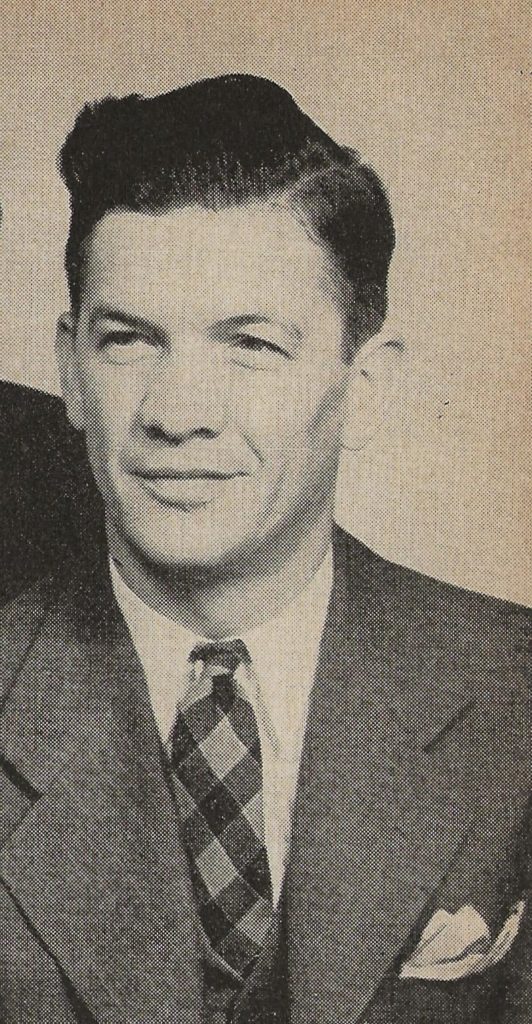 George Strayer from Hudson, Iowa, became the first paid employee of the American Soybean Association when he was hired as executive secretary in 1940. Several promotions in job responsibilities and title kept Strayer in the top executive leadership position at ASA for 27 years.

By the late 1940s, ASA leaders were regularly traveling at their own expense to foreign countries seeking to find new markets for U.S. soybeans, soy oil and soy meal. ASA’s continuing efforts to market U.S. soybeans in foreign countries resulted in Japan becoming America’s largest single customer for soybeans by 1955. In 1956, ASA and the Foreign Agricultural Service (FAS) signed the first joint market development contracts for work in Europe and Japan. With the FAS contract in hand, ASA established its first overseas office in Tokyo, Japan in 1956.

In 1969, ASA reported for the first time that over half of the U.S. soybean crop for the year was exported. By 1984, ASA had 11 international offices conducting soybean export expansion activities in 76 countries.

In 1978, ASA moved its headquarters from the small rural town of Hudson, Iowa, to the metropolitan area and central Midwest location of St. Louis, Mo., where the growing organization could establish a world headquarters.

While many states began to initiate farmer-funded state soybean checkoff programs in the 1960s, with some of those states contributing varying amounts of checkoff dollars to help fund ASA soybean marketing activities, it wasn’t until the late 1980s that organized pursuit of a national soybean checkoff began. Through efforts led by ASA, legislation in the 1990 Farm Bill that passed established the National Soybean Checkoff; assessments began on Sept. 1, 1991.

In the 1980s, ASA focused on developing an export market for U.S. soybeans to China and continued its strong marketing activities in nearly 80 countries around the world.

In the 1990s, ASA began an even stronger focus on addressing agriculture and trade policy impacting U.S. soybean farmers. And in 1999, based on a petition filed by ASA, the U.S. Food and Drug Administration approved a new soy health claim for use on food labels.

In 2001 ASA launched the World Initiative for Soy in Human Health, known as WISHH, a program to promote the use of soy products in food aid programs worldwide. Under the 2002 Farm Bill, ASA lobbied successfully for soybeans to be treated as a program crop, making farmers eligible for 44-cents/bu. direct payments and a $5.80/bu. target price. In 2004 ASA achieved a major legislative victory when the first ever biodiesel tax incentive was signed into law, dramatically boosting the production of biodiesel and use of soybean oil. 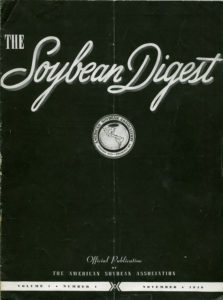 In November 1940, ASA published the first issue of a new monthly magazine titled, Soybean Digest. The magazine was created to provide news about ASA organizational proceeds and to disseminate information about the growing, marketing, handling, processing, and sale of soybeans. The cover of the first issue is seen here. ASA owned and published Soybean Digest for 53 years, selling it in 1993.

In the 2010s, ASA has had successes with passage of trade promotion authority, funding for waterways infrastructure projects and labeling standards, to name a few. International market access and trade agreements continue to be top priorities for ASA.

You Can Celebrate with ASA

Events include a 100th anniversary celebration at Soyland farm.

On August 4, 2020, at the Fouts brothers’ Soyland farm in Camden, Indiana, there will be an ASA birthplace celebration to include ASA historical information, antique farm machinery, heirloom soybean plot tours and a special program with state and national speakers. The event also includes dedication of an Indiana Historical Marker at the Fouts farm that acknowledges the agricultural contributions of the Fouts family and recognizes “Soyland” as the birthplace of the American Soybean Association.

For more information and to register for either or both events, go to ASA100Years.com.