Basis is a term that is commonly used when talking about crop marketing and marketing plans. Unfortunately, there is considerable confusion about the term and its proper interpretation. This is the second article in a two-part series discussing basis and how farm managers can use basis for making more informed marketing decisions.

Basis can also regulate grain flows across different locations. For example, the basis at a local oilseed crushing plant for delivery in March may be stronger (less negative) than the basis at a nearby grain elevator because the elevator is full and waiting for transportation to arrive before it can efficiently deliver to an export facility. In this example, the basis at the oilseed crusher is signaling a stronger demand for soybeans in March than the local grain elevator. The farm manager must decide if the difference in basis levels between the two locations is large enough to cover any additional delivery costs from on-farm storage.

Another common misconception is that farmers pay the entire transportation cost to move grain from their farms to an end user. This is true for farm deliveries directly to a local processor, but it is not true for deliveries to an export terminal. The transportation costs from a local elevator to an export terminal are always shared between the grain buyer and the grain seller. However, the portion of the total cost paid by the buyer and seller can change over time.

For example, the basis for soybeans at elevators in central Illinois weakened (became more negative) during early July 2019. Flooding on the Mississippi River halted grain barge shipments into the Gulf export terminals. Both grain buyers and sellers were forced to either find other short-term supplies of soybeans and/or arrange for alternative transportation, typically delivering by railroad, which is more expensive than barge shipments. 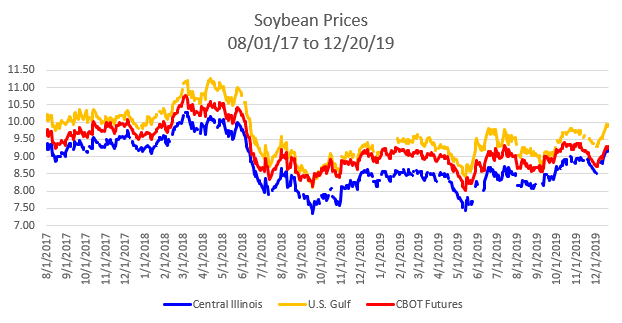 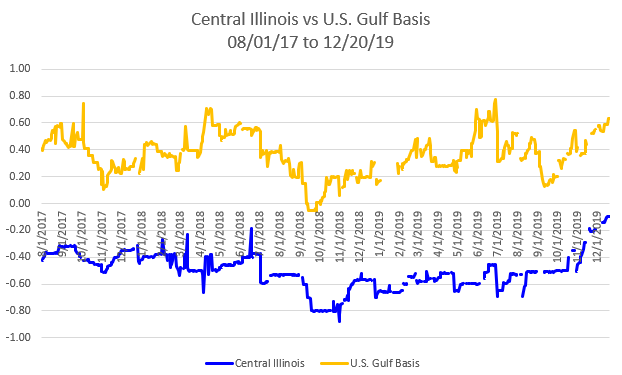 Figure 2 shows the historical basis levels for grain delivered to a Gulf export terminal (gold line) and a central Illinois grain elevator (blue line). Once again, note that the basis levels for these two locations tend to move together over time, but not perfectly. Figure 3 shows the historical spread, or difference between, the Gulf basis and central Illinois basis. The basis spread between these two cash markets typically varies from about $0.60 per bushel to about $1.20 per bushel. This price spread must pay for transportation from central Illinois to the Gulf, the local elevator’s handling costs and profit margin, and any storage costs. 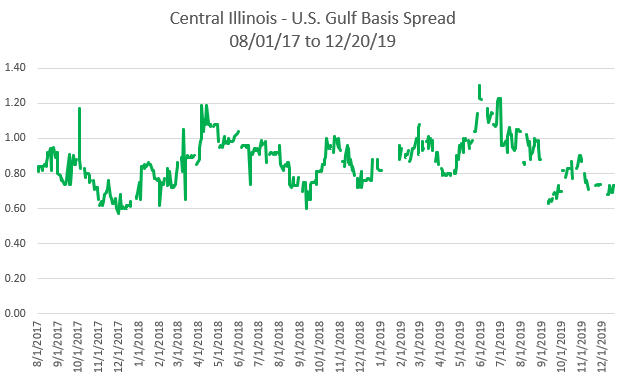 However, in late May 2019, when Mississippi River barge shipments were halted, the basis spread reached a peak of about $1.30 per bushel. Figure 2 shows that the basis levels in the Gulf increased significantly from late May until late June 2019. But, the basis levels in central Illinois changed very little during the same period. This suggests that the Gulf export terminals began bidding more aggressively for soybean deliveries. Local grain elevators responded by selling soybeans, but they had to pay a higher cost for rail deliveries rather than barge shipments. A portion of the increased transportation costs resulted in lower farm prices, but the majority of the increased transportation cost was paid by the buyer. This is an example of a “demand pull” market response.

Understanding historical basis patterns and why basis levels change over time and across location can help farm managers develop more effective marketing plans, accurately estimate the revenues from on-farm storage, and adapt to changing market conditions. This two-part series has tried to clarify common misunderstandings about basis and provide a useful operating definition for basis. I hope you have found it valuable.