The value of U.S. soybean exports to the world reached a record $25.7 billion in 2020 according to the USDA Foreign Agricultural Service, and global demand for soy products remains high. However, international markets don’t just happen, instead, they’re the result of years of effort by farmers and members of the soy value chain to build preference for U.S. soybeans.

Four American Soybean Association directors currently have an extra hand in international market development efforts, serving as ASA representatives on the U.S. Soybean Export Council (USSEC). Each of these growers has a different perspective but common commitment to building global demand. 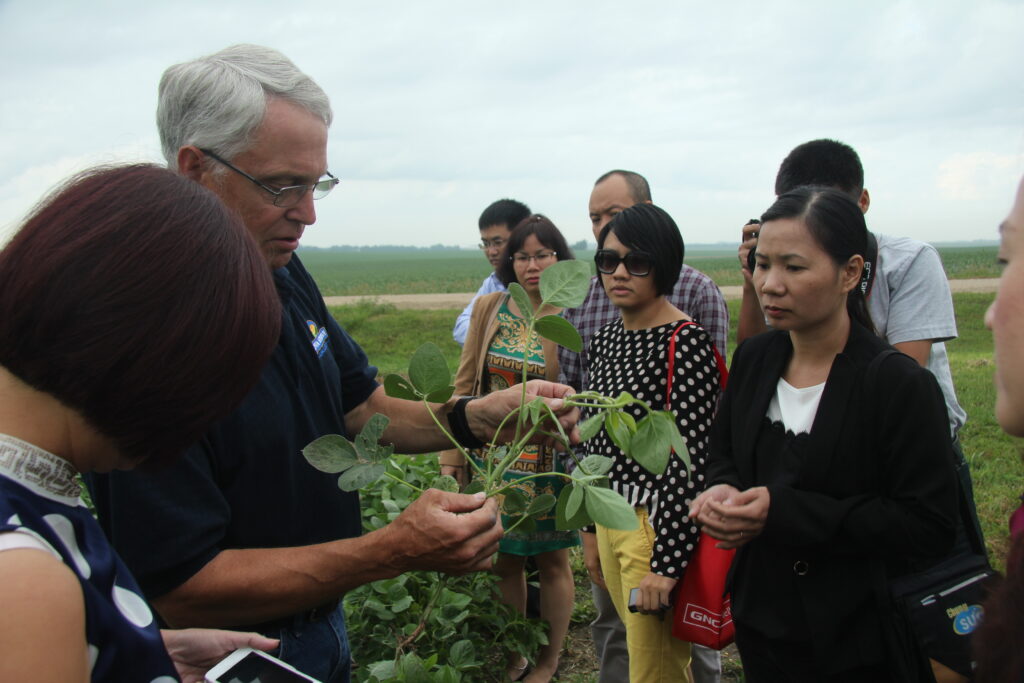 Trade teams from around the world have traversed Brian Kemp’s northwest Iowa farm getting an up close and personal look at U.S. soybean production and meeting the farmers who grow soybeans. Kemp has also participated in international trade missions to meet current and prospective U.S. soy customers.

As U.S. soybean production has outpaced domestic demand, exports have taken on increasing importance to farmers, but new markets rarely develop quickly. ASA worked in China for decades before any U.S. soybeans were sold into what has become the world’s largest soybean consumer.

“It’s important that we don’t just focus on the big customers,” Kemp contends. “It’s essential that we continue to maintain and develop relationships with all foreign customers.”

The U.S. soy industry has recently dealt with the global effects of African Swine Fever reducing soybean meal demand, a trade war with China, and the effects of COVID-19 on international trade. Kemp says U.S. soy exporters were able to pivot to other markets during those challenging times because relationships had already been established.

“Some markets are rapidly developing, such as Pakistan, Bangladesh and Egypt. Others, like India and Africa, have large populations but will  take time to develop,” Kemp explains.

Kemp says the value of relationships cannot be overstated because once connections have been made, customers are more likely to be open to a discussion of soybean quality—a key selling point for U.S. soy.

“U.S. producers successfully work to provide soybeans that are grown under the best management conditions, are harvested at optimum moisture content, and are superior in the components that make them the best feed source for livestock,” Kemp says. 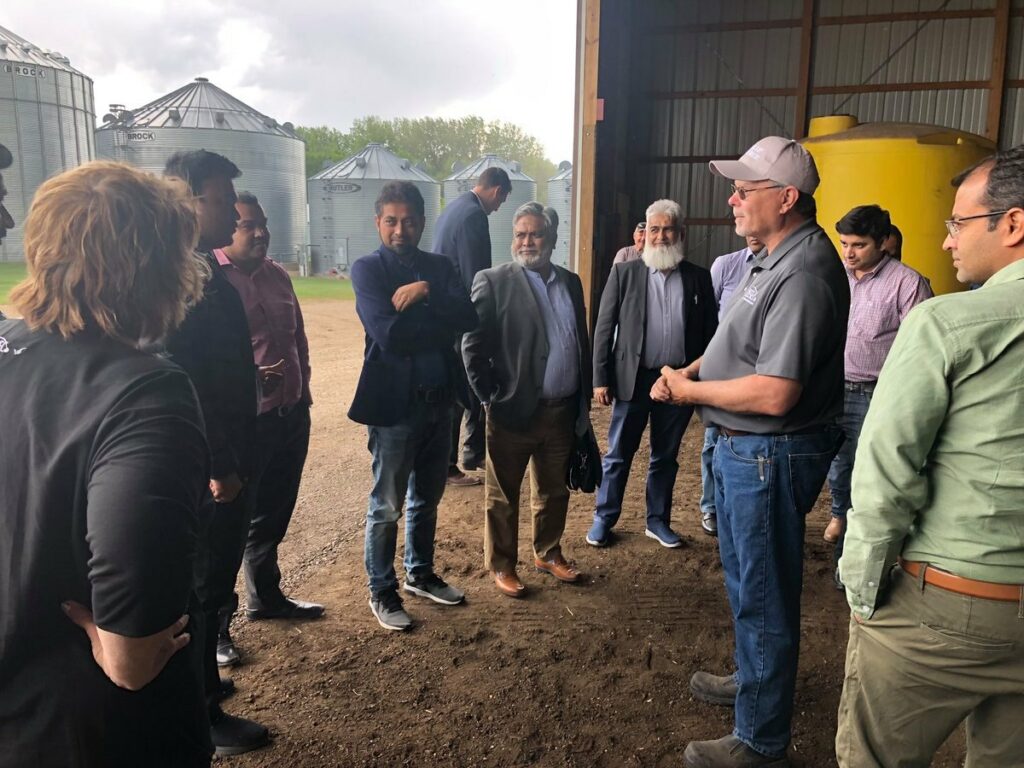 During a tour of the Upper Midwest to showcase the United States’ transportation system and infrastructure—one of the biggest advantages of buying U.S. soy—international delegates from Pakistan and Bangladesh visit ASA and USSEC Director Monte Peterson on his North Dakota farm. Photo Credit: Lisa Humphreys

North Dakota’s soybean industry was largely built on the promise of global soybean exports. Without significant in-state processing, most North Dakota soybeans were loaded on trains bound for the Pacific Northwest then shipped to overseas markets, largely in Asia.

Monte Peterson farms near Valley City, North Dakota. He recalls serving on the North Dakota Soybean Council more than a decade ago, when the state’s annual soybean production was only about 2 million acres.

“Soybean acreage has now swollen to the 7-million-acre mark,” Peterson says. “In the case of North Dakota, exports were imperative because we had no dedicated soybean crush to consume anything domestically.”

Exports became a key issue for Peterson, who is now in his second term as USSEC chair. He knows international markets contribute substantially to the value of soybeans grown across the United States.

“We have the good fortune of raising over double what we utilize here in our own country,” Peterson explains, “so, for the sake of every U.S. soybean farmer out there, exports are vitally important.”

USSEC builds preference for U.S. soy products worldwide by demonstrating how customers can benefit from using high-quality products from the U.S.

“I think that we really do a topnotch job of getting to know our customers and what their needs are and understanding ways that we can help them grow the utilization of U.S. soy before we just say, 'Here, we want you to buy from us,’” Peterson explains. “I think trade servicing is the key to that process of building a preference for U.S. soy.”

“Being a dependable supplier speaks volumes to our customers,” Peterson says.

As a young farmer, Joel Schreurs sold his soybeans to the local grain elevator without giving much thought to where those beans were headed from there. His mindset changed when Schreurs got involved with the Minnesota Soybean Growers Association international marketing committee.

In addition to farming, Schreurs’ sales background helped him further understand how valuable relationships are, whether he’s selling a truck or tractor to a local farmer or soybeans to customers in the Philippines.

“A lot of what we do is public relations,” Schreurs says. “We're selling ourselves and we're selling the product as a whole. There are so many opportunities to sell these soybeans and to promote them throughout the world, but it takes a lot of time, and it takes a lot of effort and people.”

Schreurs has been to numerous countries on soybean trade missions and has hosted dozens of international delegations on his southwestern Minnesota farm. Schreurs says that while some soybean purchases are made solely on price, other sales are made because of relationships that have been cultivated over time.

“Each country is a little different, but it's typically about relationships,” Schreurs contends. “It's no different from when we shop for certain things, we tend to go back to that person that we feel gave us the best deal. If we think we're not being treated fairly, then we're looking someplace else.”

“We looked at a lot of other markets instead of solely depending upon China,” Schreurs says. “Even though China’s going to be the big market for many years to come, the situation made us reach out to a lot of other different countries and try to develop them to be bigger markets.”

Stan Born’s interest in international soybean markets is driven by a recognition that more than half of the nation’s soybeans are exported—and from his  30-plus years working in the industry for Caterpillar. Born also has a strong desire to use soy products to improve lives.

“I have a passion for helping underdeveloped countries and particularly kids there who don't have as much protein in their diets, which makes it more of a struggle for them to grow up healthy and have rewarding lives,” Born says. “Any time we can make a difference by trying to get protein into underserved countries, I'm all for it.”

As global economies improve and a growing number of people earn a living wage, more people want to eat better. That presents an opportunity for soy.

“People move from a diet that's largely carbohydrate in nature to one that includes more protein. That protein can be vegetable protein or it can be animal protein,” Born states. “Soy is a great solution for both.”

USSEC’s goal is to build preference for U.S. soy products around the world. Born believes that effort involves education.

“It starts with knowledge and equipping people to let them know why soy is a good solution regardless of its source of origin. Then it is about explaining the intrinsic and extrinsic differences that U.S. soy can deliver,” Born says.

“The most important thing is building trust with our customers and giving them knowledge about why soy is a good solution, then explaining the differences between U.S. soy versus other sources of origin,” he explains.

Born is optimistic about the future of exports for U.S. soy. New markets are being developed in Asia, Africa, the Middle East and the Americas. U.S. soy faces competition in these and other markets from other soy-producing countries and from alternate protein sources but Born says U.S. soy producers have a good story to tell about U.S. soy’s advantages.

“U.S. soy may come at a premium, but when you look at how much it costs to put a pound of meat on animals, in many cases we can prove that it is the best economic solution,” Born says. “These customers are businessmen, and if you can get to the right folks, you can get the story across that U.S. soy can be the best solution for their business.”