Like a good football offensive lineman, a healthy supply chain operates so smoothly that it’s barely noticed. Recent disruptions in global transportation have thrust supply issues to the forefront and illuminated just how precarious global commerce can be.

Difficulties surrounding shipping containers, clogged ports and delivery delays have plagued nearly every sector of the U.S. economy, including agriculture. Despite global transportation and shipping issues, the system that moves most soybeans and soy products in the U.S. has escaped relatively unscathed, but not without challenges.

“The inland industry’s been fairly insulated from the supply disruptions that have impacted the coasts, for the most part,” Rohde says. “It hasn’t been enough to move the needle on our inland water highways, at least not yet. 2022 could certainly prove otherwise, and the longer the disruptions go, the more it will be felt across all industries.”

Intermodal transportation has felt the tightest pinch because containers can be used to move products of all kinds, from electronics to shoes. Soy Transportation Coalition Executive Director Mike Steenhoek says only about 5% of soy products move via containers. 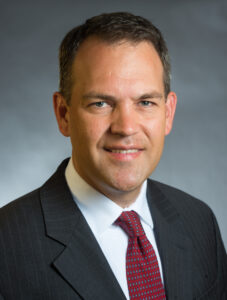 “When you look at how soybeans are overwhelmingly moved, it’s by barge and by rail in a bulk mode,” Steenhoek says. “The product is still moving.”

The supply chain disruption’s biggest impact to inland waterways comes from labor shortages. Rohde says towing companies are hiring, offering enticing career opportunities for people who are willing to learn, work hard and advance as far as their will and skill can take them.

“But it’s an industry with unique characteristics,” Rohde explains. “Crews spend weeks at a time away from home and family. The federal vaccination mandate will provide additional challenges, but the industry’s shown resilience time and time again and answered the call to continue providing sustainable transportation. America’s inland rivers have room for additional capacity and could be part of a long-term solution.”

A quest to invest 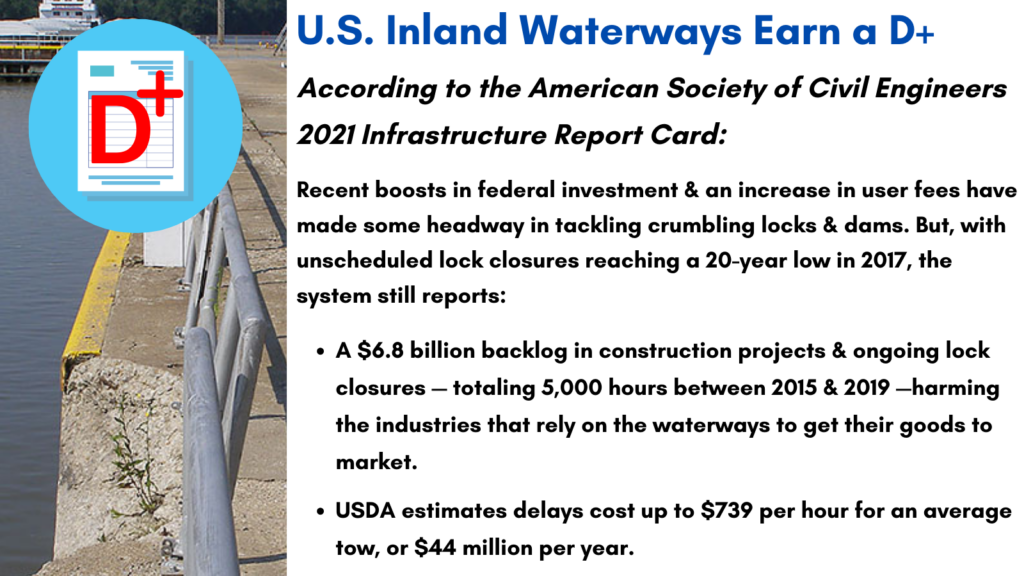 Transportation advocates and agriculture leaders, including the American Soybean Association, have long advocated for additional funding to support and maintain the nation’s aging transportation infrastructure, and with good reason. Rohde says the 2021 Report Card from the American Society of Civil Engineers gave the nation’s inland waterways a D+ grade.

“Not what you’d want to bring home and show your parents,” Rohde says.

Threats to the nation’s waterway viability aren’t just theoretical. The I-40 bridge over the Mississippi River at Memphis closed in mid-May, rerouting river traffic for weeks. Rohde says about 430,000 tons of cargo travel under that bridge every day via barge. Moving that tonnage by truck would put an additional 17,000 trucks on the road every day.

Shutdowns at key locks and dams could have an even greater downstream effect. The Mississippi Gulf region accounts for 58% of U.S. soybean exports, and approximately 89% of those soybeans are moved by barges, which rely on lock and dam infrastructure to be reliable.

“There is no water alternative if a lock has an emergency failure,” Rohde explains. “For example, if Lock 25 near St. Louis has an emergency closure, it effectively shuts down the entire river, as well as access to the Illinois River from above St. Louis. Lock 25 transits commodities going to 132 separate counties in 17 states, plus international markets. A shutdown of Lock 25 would cost $1.6 billion in additional shipping charges.”

Rohde says federal appropriations for repairing and maintaining waterways have trended higher in recent years. The U.S. Army Corps of Engineers (USACE) and industry have put a prioritization list together to prepare for any additional funding.

With the exception of the 2020 rehabilitation of LaGrange Lock and Dam on the Illinois River, Rohde says the Mississippi and Illinois Rivers haven’t seen much capital improvement in the past three decades.

“Quite simply, the future of our inland waterway infrastructure will determine, in part, the future success of American agriculture,” Rohde contends.

The recently passed infrastructure bill, HR 3684, was celebrated as a win by many agriculture and transportation leaders. The measure provides $2.5 billion for locks and dams, a 400% increase from the last significant infrastructure push, the 2009 American Recovery and Reinvestment Act. If Congress maximizes appropriations levels, Rohde says nearly $4 billion could be available over the next five years for infrastructure construction and rehabilitation.

“That funding could get us more new starts than we’ve seen in decades, and, more importantly, the completion of more projects so we can enjoy the benefits of more efficient river shipping sooner,” Rohde adds.

“I have long argued that investment shouldn't be a one-time thing, it needs to be a perpetual activity,” Steenhoek says. “Great nations continue to invest in themselves, and that's what this bill is designed to do. It's not going to be the magic wand to some of the challenges confronting our current supply chain, but it's a great step long-term to really position us for success.”

On the road again 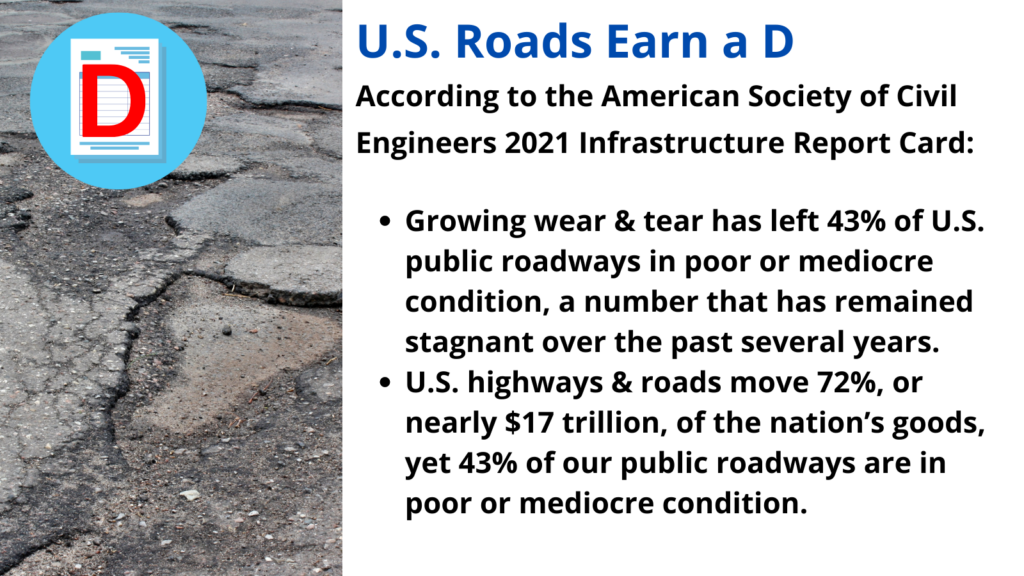 Not all soybeans move via inland waterways, but the vast majority start their journey to market on a rural road. The infrastructure bill included badly needed funding for rural roads and bridges.

“A farmer doesn't make just one delivery, a grain elevator going from their facility to the soybean processor or barge loading facility, that's not one trip. We’re talking about thousands and millions of bushels,” Steenhoek says. “You're incurring that detour over and over again, and it's a cost every single time.”

The infrastructure bill approved by the U.S. Senate in August, by the House in November and signed by President Biden November 16 allocates $110 billion over the next five years for roads and bridges.

Steenhoek says being able to address lingering issues, like the condition of rural bridges and the inland waterway system, is going to improve the economics of agriculture and other industries.