Biotech, Digital Tools Critical to Past and Future of Ag 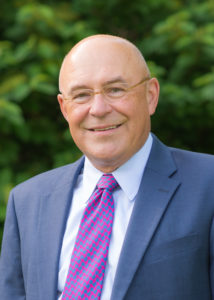 Dr. Rob Fraley is former executive vice president and chief technology officer at Monsanto, where he helped to develop the first genetically modified seeds. He retired from Monsanto in June 2018 but continues advocating for the use of GMO products to address global food insecurity and reduce the environmental footprint of agriculture.

The history of soybeans in the U.S. is a remarkable story, and ASA has been instrumental in its success from the very beginning. Like many farm kids, my first encounter with a soybean was walking my dad’s fields in Central Illinois when I was eight or nine years old “cutting weeds out of the beans.” Little did I know then how intertwined my career would become with this amazing crop. I joined Monsanto in 1981 to become part of the research team charged with developing the tools needed to apply biotechnology advances to crops. From the beginning, we had the long-term goal of creating Roundup resistant soybeans. In the 1970s and ‘80s, weed control in soybean fields was a big challenge for farmers, and we knew that Roundup resistant soybeans would be a terrific solution.

Our research followed two tracks: 1) developing methods for transferring genes into crop plants, and 2) understanding the mechanism by which glyphosate, the active ingredient in Roundup, killed plants. I still remember our very first transgenic soybean plant…it was a lanky, dark-seeded Peking variety. Thank goodness our partner, Agracetus, had early success using the particle gun to insert genes into Asgrow varieties! Our scientists carried out extensive studies to modify the herbicide’s target enzyme, 5-enolpyruvylshikimate-3-phosphate synthase (EPSPS), to make it resistant to glyphosate. The discovery of a microbe in our Roundup manufacturing site in Luling, Louisiana, which had a highly glyphosate tolerant EPSPS, was a key breakthrough.

By the mid-1990s, we had made progress on both the glyphosate and gene transfer fronts and were able to commercialize Roundup Ready soybeans in 1996. The adoption by soybean farmers was incredible, and within a few years, Roundup Ready soybeans, which were licensed broadly to hundreds of seed companies, were planted on more than 90% of the U.S. soybean acres. Major benefits of Roundup Ready soybeans included improved weed control and reduced need for tillage. Roundup Ready soybeans enabled farmers to innovate with no-till and reduced-till cropping systems to reduce erosion and improve soil moisture and health. Today, farmers have the choice of many herbicide tolerant trait options and combinations to help manage weeds in their fields.

Since the early part of the 1900s, soybean breeding has played a critical role in favorably advancing yield, agronomic and quality attributes. As a result, we have seen a remarkable increase in soybean production yields, disease resistance and protein and oil quality. With more recent advances in whole genome sequence information, high throughput marker technologies and advanced data science, soybean breeders are now positioned to dramatically increase program scale, speed and selection intensity. Combined, these technologies will continue to accelerate the rate of genetic gain and advance U.S. soybean production.

As we look to the future of this crucial crop, advances in biotechnology and digital tools will accelerate momentum toward higher soybean yields, production efficiency and differentiated oil and protein compositions that will target feed, food and industrial applications. Gene editing advances are currently being applied to several diseases and crop quality improvements.

Precision ag tools are helping growers optimize planting, nutrition and production decisions. Once grown mainly as a “rotation crop,” today’s soybeans rival that of other major row crop economics (in the last several years, national soybean yields have exceeded 50 bushels/acre). The continued investment in soybean research and development is critical to meeting future demand as our global population increases to 10 billion people by 2050. Domestic uses and export market demand will continue to build, given the popularity of soy as a feed ingredient for pigs and chickens. Developing countries show the most significant opportunity for growth for U.S. soy—both direct to humans and as an animal feed source—as they focus on improving diets and nutrition.

I would personally like to applaud ASA for their past and future industry leadership efforts to fund research, identify new markets and most notably, their commitment to explain to consumers and policymakers the importance of innovations in agriculture and food production. As important as the scientific advances are themselves, the need to explain and communicate the underlying science and benefits of new products is just as critical.