Amanda Heilman (right) advocates for agriculture using both social media and her personal blog, offering a glimpse into her life on the farm with husband Wes Miller (left).

“I got involved with ASA’s Agriculture Communications Team (ACT) in 2017 and found it to be the best media training I ever received,” says Amanda Heilman from Rising Sun, Maryland. “It put more tools in my toolkit, and I have had a strong social media presence ever since.”

Heilman and her husband, Wes Miller, were also ASA Young Leaders in 2019. Miller is a sixth-generation dairy farmer who produces soybeans, corn, wheat and hay.

Heilman helps on the farm as she can.

“I am a full-time cheesemaker,” says Heilman, the University of Delaware’s UDairy Creamery plant operator. “I am a huge foodie. Cooking is my passion.”

Heilman, otherwise known as the “Delmarva Crop Queen,” got involved with ASA at the urging of Delaware soybean farmers when she was a seed sales rep for DuPont Pioneer. She has also served as a CommonGround volunteer, which put her in communication with consumers. CommonGround is a group of volunteer farmers that have conversations with consumers about the food they grow and how they produce it.

“I was traveling in the Mid-Atlantic for work. People started referring to me as the Delmarva Crop Queen, so I took advantage of that by posting on Facebook with the nickname,” she says. “I started using Instagram and Twitter to share agronomic alerts and legislative issues.”

Heilman spends about an hour a day creating social media posts. She especially enjoys sharing food pictures on Instagram, using relevant hashtags and relating the food back to the farm.

“I am raising awareness about agriculture. I get so many comments from followers who say they are unaware of what happens on the farm. They need to know where their food comes from, especially as consumers are increasingly removed even further from the farm,” she says.

Heilman also maintains a website and blog (delmarvacropqueen.com), although she does not see as much traffic with the blog unless it involves recipes. Her area of growth is in live videos.

“Videos are huge. Wes and I did one on the tractor packing corn silage. We called it ‘sauerkraut for cows,’ and it is insane the number of views we got. We will do more of those,” she says.

She also has been posting about their wedding, where they did a farm-to-table dinner with everything grown on the farm, including cotton for boutonnieres.

“Consumers like to see how farmers do usual things. They want to see how they might relate to you doing things they do,” she says. “My advice is to tell your story. Be transparent.” 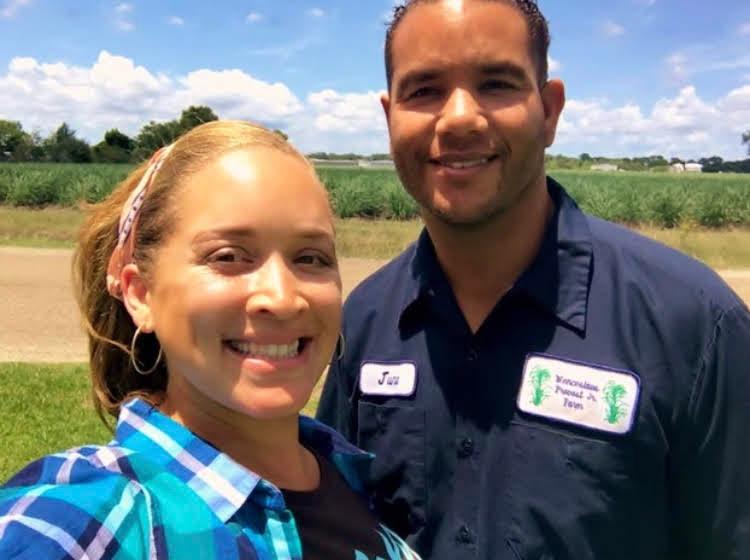 (From left): Angie and June Provost use social media to share their personal obstacles as Black farmers, as well as their passion for agriculture.

Telling their story is exactly what farmers Angie and June Provost of New Iberia, Louisiana, are doing with social media. The ASA Young Leaders use their training to share a personal story of discrimination while also talking about their passion for agriculture.

“We are on a pathway to rebuild and secure our farm legacy and our future in agriculture,” says Angie. “We work to dispel myths about Black farmers and to be included in the conversation. Trade wars, fair pricing and having the right resources to farm are not black or white issues.”

Both Angie and June have faced discrimination through the farm loan process and sugar cane production contracts in the past. As they started to speak out and question practices, their farm was vandalized multiple times. Due to the many challenges they faced, June, a fourth-generation farmer, lost the family’s 5,000-acre farm in 2015. Angie lost 500 acres in 2017.

“Farming is everything to me. I want to get more Black kids involved in agriculture,” says June. “We are proponents of family farms and want to remain part of modern agriculture.”

“Social media for our generation is a tool our ancestors did not have to be open and honest about the situation of Black farmers. It gives us access to a variety of people we might not otherwise reach,” says Angie. “In sharing our views, we have found we are not the only Black farmers in this situation, and we have had white farmers reaching out with support. It is extremely important to advocate for the rights of Black farmers because they are the rights of all farmers.”

Both June and Angie say the Young Leader program gave them the opportunity to visit other soybean production areas and learn about farming from different points of view.

“Farm groups must be intentional in getting Black farmers involved. Agriculture is too important to our nation to not share how farming and American values relate to all of us,” says Angie. 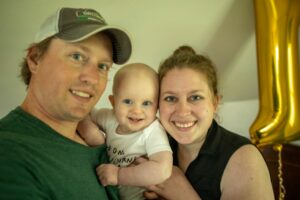 As a way to connect with consumers and legislators, Jordan Scott (left) produces a YouTube channel detailing various aspects of life on the farm as he works alongside wife Samantha (right) and his parents in Valley Springs, South Dakota.

“It is good to get your message out to farmers, consumers, legislators and others in a way that connects with people,” says Scott, a fifth-generation farmer.

He and wife Samantha farm with Jordan’s parents. The 1,300-acre corn and soybean farm, which is near Sioux Falls, has been in the family for more than 100 years.

The couple became Young Leaders in 2016, and Jordan was elected to the state soybean board. He also has participated in Soybean Leadership College, Leadership at its Best and ACT. And like Heilman, Scott found ACT a great resource for delving into social media.

“You have to get out of your comfort zone and see yourself on video. It changes your perspective, and it is good to get tips on how to be effective,” he says. “I watched a lot of YouTube videos to get started. It is hard at first and takes time to build a following, but you should just be yourself.”

“I follow myself around all day and tell my story. I talk about our equipment, products we use, plant and soil health and other topics,” he says “I have a broad scope of farmers nationwide, and my city friends follow me. It’s a great way to show the work it takes to be a farmer.”