America’s competitive edge in farming largely relies on her ability to move vast quantities of food, fuel and fiber along transportation routes that are the envy of the world. That edge, however, is slowly slipping away. And that’s why Congress and the White House are moving so decisively on infrastructure.

Problems are plain to see:

Soy eventually makes it to market. Most workers say they get through their day without undue stress, but the sum of all these glitches wears on them—some much more than others. And it costs growers, who pay a price for slower delivery and missed sales. 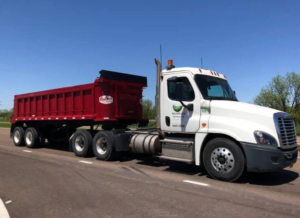 Willard Jack, a farmer in Mississippi, says road deterioration in the state is extremely hard on his trucks.

Willard Jack is a farmer with a trucking company in Mississippi. Infrastructure—roads, especially—are a constant worry.

“My business is basically hauling beans to the elevators or to the rivers,” he says. “So we have problems in Mississippi, but I don't think they're any different anywhere else.”

Deteriorating bridges are a continual challenge.

“We’ll go halfway through harvest when, all of a sudden, the state throws a half-weight or a third-weight order on a bridge,” Jack says. “That means we have to drive around to go to where we want to go from there. That is likely the biggest day-to-day problem we see. The other big one is the roads deteriorate. We beat trucks to death more than ever before.”

“We're not collecting enough money on fuel, and our trucks have gotten so much more fuel efficient. Twenty years ago, we likely got four miles a gallon. Now we're getting six or seven.” Given that federal tax comes from a surcharge on gasoline and diesel, Jack says, “We're upset since we're not paying as much road tax as we did even 20 years ago.”

Boat pilots who guide barges filled with grain through river channels to the next stop in supply chain say inadequate maintenance and weather often grind their operations to a halt, creating a chain reaction. Photo Credit: United Soybean Board

Boat pilots know the sting of bad maintenance, too.

Paul Amos navigates 120 miles of the Columbia River, where he guides ocean-going ships from the Pacific port of Astoria, Washington, to pick up soy and other products at harbors as far as Vancouver, Washington, and Portland, Oregon. Incoming vessels need Amos’ specific expertise to navigate the Columbia since they sail the oceans, rather than U.S. rivers. His job begins once local harbor pilots have safely maneuvered ships across the harbor sand bars to the mouth of the river.

Amos faces an ever-changing river, one with features that shift with three separate tides over an 8-hour day.

He gives Columbia channel maintenance a “C-plus or a B,” but even a B is low when supply chains are strained and commodity markets so turbulent.

A short wish list for the river includes dredging and more tidal gauges to monitor water depth and currents. Amos says pilots need better maintenance of anchorages—areas suitable for ships to anchor in—for the deep-draft vessels he steers up and down a river that often silts up.

“The Army Corps of Engineers maintains the channel, but they don’t necessarily maintain the anchorages,” he says. He hopes Congress will find funds to pay for those improvements, as well as more anchor buoys he can tie his ships to, which keep them stable in the water when they’re stopped.

Nearby, Dan Jordan is a harbor pilot who hands off ships to people like Paul once he has steered them through Astoria harbor. The approach to the Columbia is infamous.

“The Columbia Bar is known as the roughest harbor entrance in the world,” he says. “We sometimes deal with waves in excess of 30 feet.”

Getting past sandbars is hard enough when the National Oceanic and Atmospheric Administration (NOAA) has buoys in place to measure the winds, treacherous currents and pounding waves Jordan faces. Nowadays, though, three of the four buoys are missing while the Coast Guard struggles to keep up with the load it has elsewhere.

“It’s a matter of really getting all the pieces together,” he says.

In addition to the buoys themselves, the Coast Guard needs specialized tender craft that can place and retrieve them.  When a buoy malfunctions or breaks free of its moorings, the Coast Guard has to chase it down and send it to Mississippi for repair, which can take months. One of the three missing buoys is there now. Once repairs are done, the Coast Guard will ship it to Astoria, where a NOAA technician will have to find the time and good weather to put it back where it belongs.

“We have kind of a blind spot while they’re missing,” Jordan says.

Amos and Jordan say they’re more than aware of the chain reaction that occurs when weather or inadequate maintenance grind their operations to a halt.

A stopped ship can keep a grain elevator from loading its next ship. That backed-up ship means about six full trains may not unload. And the longer it continues, the more train sidings will fill up with grain and beans awaiting a place on a ship. In extreme cases, rail cars can fill sidings for miles on end. Once in 2007, he says, sidings were full all the way to Montana—600 miles east of Astoria. 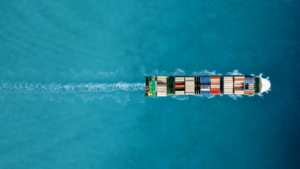 Bob Sinner faces more problems than most. “This should never have happened,” he says, strain evident in his voice.

Sinner, a farmer and president of SB&B foods in North Dakota, produces identity-preserved crops such as organic and non-GMO soybeans, as well as black soybeans, white sorghum, wheat, barley and rye. He depends on truckers, railroads and ships to get his specialty soy to the Far East. Unlike most soy shipments, his crops will go into comparatively small, multi-mode containers loaded onto container ship decks, rather than poured into the massive hulls of grain ships. SB&B employees have to book space on those ships. And that’s where their problems start.

U.S. ports are overloaded as it is. But the high value of goods headed from Asia to the U.S. means ship owners can charge elevated prices—six, seven, even 10 times what they charge for soy and other commodities on the voyage back. Coupled with congested ports, that means many ships don’t bother to pick up all the U.S. exports they could. They simply turn around to get more high-price loads from China and elsewhere.

“What is so troubling,” Sinner says, “is these containers can sit in a vessel anchored outside the Port of L.A. for a week, 10 days, two weeks, which is no more than the time it would take to load those containers for export. So they say ‘Oh, we can't take the time to load you.’ And yet they have these long wait times in which they could have. It's pretty crazy.”

Shipping soy means truckers position containers the night before they pick up their load so they can drive without exceeding the legally allowed work hours the next day. Railways, meanwhile, schedule pickups and drop-offs while requiring truckers to stay within two dates—an early return date, and a cut date, which is the latest they will take back the container without additional charge. SB&B pays for the container and transport alike after booking the load directly with the ocean carrier.

The problem is, most days—four out of five, Stahl says—the railway will make last-minute changes to the days it will accept SB&B’s containers, oftentimes due to changes made in the ships’ schedules. If they move dates back, that means the trucker has no work for the day and SB&B will have to pay for additional days to store the now-full container of beans parked on a trucking company lot. That cost can turn profit into a wash, if not a loss.

If they move the day forward, Stahl will have to scramble to find other accommodations. The next date a ship is available is typically 4-6 weeks out.

Stahl is continually on the phone with ocean liners and railroads, both. And it’s SB&B that pays. Sixty percent of loads, she reckons, have a schedule change of some sort.

Truckers, pilots, schedulers—all tell different stories, yet all speak from the same, deep-seated frustration: Someday, they say, roads will get better. Someday, the Columbia’s locks will be big enough for its barges. Someday, shipping lines will reliably take containers of grain. Someday, the ports’ chaos will give way to well-structured routine.

Thanks to the Bipartisan Infrastructure Bill that President Biden signed into law in November 2021, there could be light at the end of the proverbial tunnel: There is hope that those changes may come sooner rather than later. Ask the boots-on-the-ground workers in transportation, and they will tell
you: Funding can’t come too soon.

It takes numerous working parts to move U.S. soy to market, and the beans will take on just as many paths, problems and end-uses throughout their journey. The American Soybean Association launched a unique education campaign on social media last fall to underscore why modernized infrastructure that supports reliable transportation is imperative to U.S. soy’s continued success and to thank Congress and the administration for passing the Bipartisan Infrastructure Package. The #SoyOnTheGo campaign personified four beans and followed their journey to market from different regions of the country, along with the different obstacles they encountered along the way. See some of the highlights and issues our soybean pals encountered on their journeys from the Upper Midwest, Pacific Northwest, South and Mid-Atlantic: 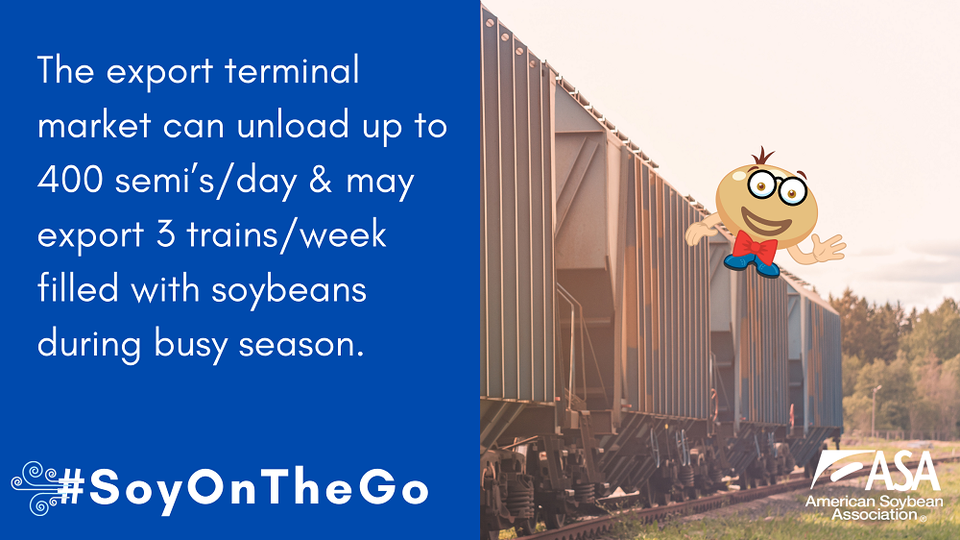 ASA’s #SoyOnTheGo campaign educated followers on each unique journey through facts and statistics to provide a broader look at transportation issues. Kicking off #SoyOnTheGo was Beanjamin Soybean, who traveled from the Pacific Northwest by road, rail and vessel to the soy export market. 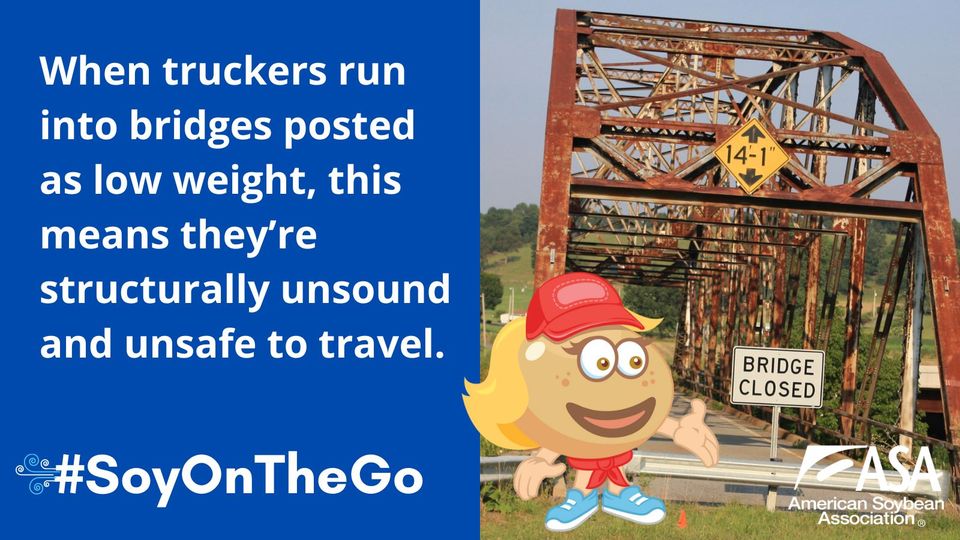 Soyphia Soybean hit a snag early on in her journey from the South, highlighting a common obstacle in transporting U.S. soy. It’s not unusual for trucks to run into a structurally unsound rural bridge and have to re-route, which increases costs for the farmer and ultimately, consumers. These issues are why ASA has continuously advocated for infrastructure funding and supported passage of the Bipartisan Infrastructure Package. 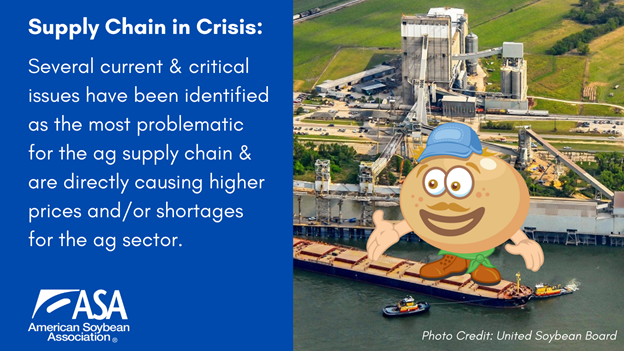 Soyvester Soybean’s meal and oil traveled by truck, rail, barge and freighter—but not without a few bumps. Hurricane Ida closed the Lower Mississippi River and grain unloading facilities in New Orleans; grain shipping volumes and prices have yet to recover. This is yet another issue that drove up the cost of Soyvester’s journey. #SoyOnTheGo offered a look at both longstanding and new transportation problems. 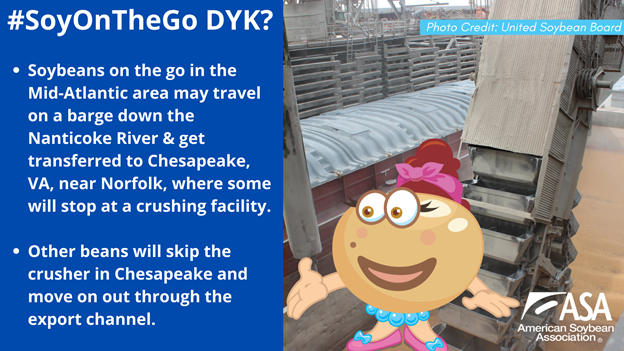 Beanita Soybean’s journey through the Mid-Atlantic helped showcase why proper maintenance and modernization of U.S. waterways is critical. Shipping by barge is the most economical and efficient mode of transportation for bulk commodities.