No matter what you label it—conservation, environmentally friendly practices, regenerative agriculture, or something else—all these terms help define agricultural sustainability. It’s a concept that U.S. soybean farmers have prioritized for generations, but not always publicized. 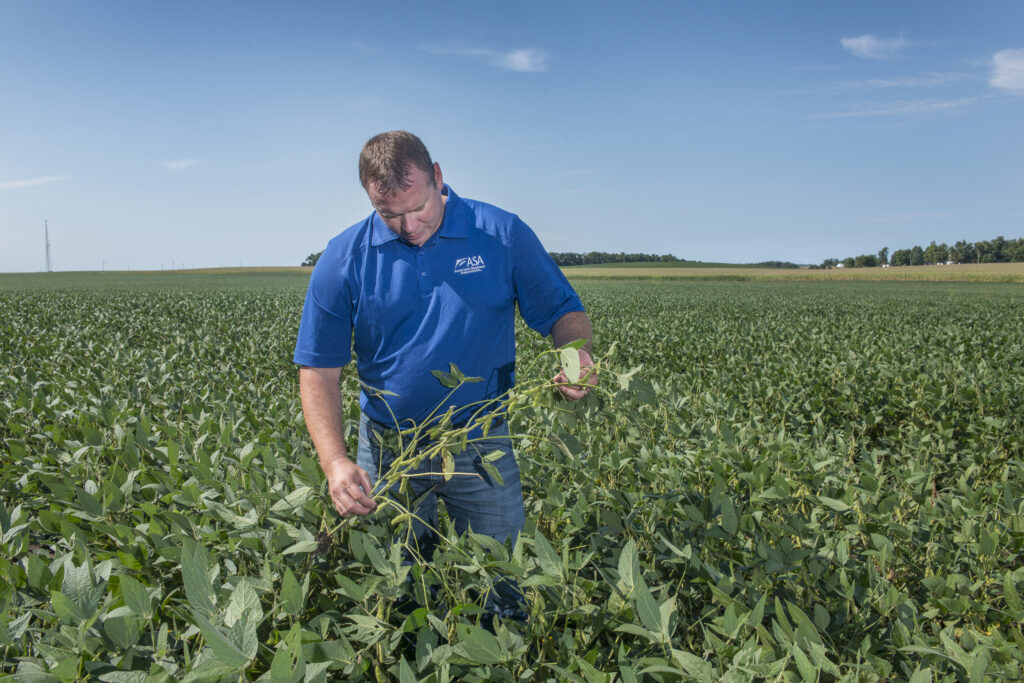 Times are changing, however, and soybean farmers realize they must share their sustainability stories. The general public and soy customers worldwide want to know more about food, feed and fuel production and their environmental footprints.

In answer to that thirst for more information, U.S. soybean farmers are making a concerted effort to be proactive and showcase their long-term commitment to sustainability. With the lead of the American Soybean Association (ASA), growers are pursuing partnerships and policies that can keep the industry on track for success into the future.

“ASA’s in-house government affairs team is dedicated to soybean growers, focused on not only reacting to farm policy in real time, but also building out a vision for soy’s role in sustainability,” says Alexa Combelic, ASA director of government affairs, leading the portfolio for biodiesel and infrastructure and coordinating ASA’s sustainability efforts.

“This is about more than conservation programs, although they are important,” she continues. “It’s sustainability for biodiesel, which has lower emissions than petroleum diesel. It’s about transportation, where barges moving on inland waterways have less environmental impact than trucks. We are connecting dots between grower needs and the Biden administration’s effort to affect climate change to show how soy fits into that larger picture.”

ASA supports a definition of sustainable agriculture that encompasses profitable, intensive production, encourages consumer acceptance of biotechnology-enhanced products and satisfies food, feed, fiber and biofuel needs. ASA, together with the United Soybean Board (USB) and U.S. Soybean Export Council (USSEC), have outlined goals for sustainability improvements by 2025, including reducing land use impact by 10%, reducing soil erosion by an additional 25%, increasing energy use efficiency by 10% and lowering total greenhouse gas emissions by 10%.

Growers are already invested in making progress in meeting these industry sustainability goals. One ASA study, conducted in 2019 through third-party surveys and focus groups, found that growers reported an average of 14 longstanding conservation practices in place on their farms. Respondents had recently added new practices and intended to implement more, even with average expenditures of more than $15,000 per year. In addition, many said they had even paid for conservation improvements on rented land, and nearly three-quarters of them said they would implement more conservation measures if they thought it would be profitable to do so.

“As technology changes and social media becomes an even bigger platform for discussion, consumers locally and globally will continue to scrutinize what is being done by growers,” says Ariel Wiegard, ASA director of government affairs leading the portfolio for conservation, precision ag, food and nutrition. “Soy has a good story to tell. We just need to tell it.” 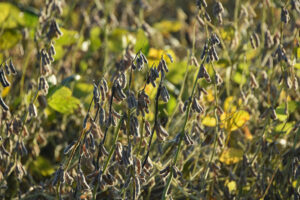 “ASA has several partnerships in play,” says Wiegard. “ASA recently joined the Food and Agriculture Climate Alliance (FACA), a new and unique coalition of conservation and ag groups that are united in principle around climate change. So far, there are 40 pages of policy proposals, covering everything from crop insurance to carbon sequestration to livestock biotechnology. FACA is stepping up and showing that the agriculture industry is a major player when it comes to conservation and sustainability policy.”

“Agriculture is on the precipice of a new era of farming. With precision ag tools, soybean growers are already able to report their sustainable practices to the government and to their supply chain partners and back them up with data. As precision ag technology evolves, this will be a new area for us to share with policymakers,” she says.

Forging previously unforeseen partnerships is also a priority for ASA. Potential ag and non-ag partners include wildlife, hunter and angler groups and general conservation groups that share common interests in habitat preservation, water quality improvement and mixed use of land.

For example, ASA is partnering with the Ecosystem Services Market Consortium (ESMC) to test carbon and water market protocols and is a Monarch Collaborative member, which is especially important since the butterflies are flirting with being listed as endangered. Because they migrate nationwide, land used for farming and habitat can be affected by a federal listing decision. 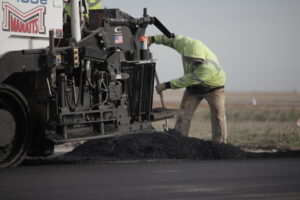 A new biobased polymer for asphalt made from high oleic soybean oil offers a lower-cost and cleaner alternative to the traditional binding agents used in asphalt. Photo Credit: United Soybean Board

ASA will continue to work with these and other partners to develop policy and increase public awareness. ASA shares its efforts through its publications and social media and has an advocacy team devoted to conservation. Board members are active in public outreach, as well.

“Growers have been using different practices on their farms that have supported good soil health and maintained productivity for generations, and they want to preserve it,” says Combelic. “When we talk with lawmakers on the Hill, many are not aware and have not been told that farmers are inherently sustainable. As farmers come to D.C. to discuss options for policy that makes environmental sense, they must also stress they need to be economically viable, too.”

Soybean farmers share with ASA that they prefer voluntary incentive programs they can customize and implement within their individual operations. There is no one size fits all. ASA supports a suite of voluntary USDA programs that receive mandatory farm bill funding like the Conservation Stewardship Program (CSP), Environmental Quality Incentives Program (EQIP), and Regional Conservation Partnership Program (RCPP). ASA remains open to developing similar-type programs that can help soybean growers extend their conservation efforts.

“While there is some interest in developing a climate change bill, the truth is that the 2018 farm bill is a climate change bill. Farmers already know that CSP, EQIP and other farm bill programs provide more than $6 billion per year to support climate-friendly practices, and they want them to continue because they work,” says Wiegard. “We could see early discussions about these programs begin soon for the 2023 farm bill.”

Other current legislative issues on ASA’s radar involve crop protection and biotechnology use and maintaining both tools to achieve conservation and broader sustainability goals.

Wiegard notes, for instance, that ASA is working within coalitions to counter the onslaught of pesticide ban bills that have been introduced in recent years. Eliminating key crop inputs from the grower toolbox would adversely affect such sustainable practices as conservation tillage and cover crop use and could increase U.S. agriculture’s greenhouse gas emissions.

“Another legislative effort we are watching is the Growing Climate Solutions Act, which would set up a sort of government-based clearinghouse for private carbon markets,” she says. “Right now, the prospect for paying farmers for carbon storage is like the wild west. Many different companies are setting up markets, each with their own payment and verification schemes, and there are too many unanswered questions. This bipartisan bill might help solve that.” 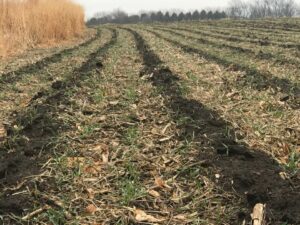 Currently, 95% of U.S. soybean growers participate in some USDA program to create and implement farm-specific conservation programs. And being actively engaged in these programs is an easy segue for soybean growers to expand into other sustainability efforts.

USDA conservation programs are the foundation for the U.S. Soy Sustainability Assurance Protocol mentioned previously. SSAP is based on U.S. conservation requirements, laws protecting the rights of workers and more to assure sustainability of U.S. soybean production.

Growers who choose to participate in SSAP sign up annually and are subject to comprehensive audit and data-collection systems, which verify sustainability through a third-party process. As more growers become involved with SSAP, the U.S. gains more of an edge in the marketplace.

“SSAP promotes environmental and social responsibility across the soy value chain, ensuring every link operates in a sustainable manner consistent with sound environmental objectives and embraces best agricultural practices,” says Combelic. “Soy farmers have already incorporated many of these climate-friendly practices into their management plans as it is, including no-till or reduced till, cover crops, crop rotations, variable rate fertilizer application technology and other precision ag tools, animal manure applications and split nitrogen applications.”

“Again, this is information that needs to be regularly shared on the Hill,” says Combelic. “We can talk about how this meets environmental goals and propose policy in this area.”

ASA relies on its annual policy resolutions to guide policy discussions. In February, the ASA Board of Directors passed its 2021 resolutions. “Sustainability is a huge priority for soybean growers, and that thread runs throughout ASA and this year’s resolutions,” says Wiegard. “Up and down the supply chain, every person involved has a stake in the federal policy and regulatory decisions for which ASA advocates. Soy is integral to a viable sustainability framework.”

Combelic says the full policy team will continue working with grower-leaders to advance the conversation every step of the way. “We have an all-hands-on-deck approach,” she says. “As we seek solutions, some programs will work, and some will not. We will see what sticks during this trial-and-error period. We will talk about where we are and how we move forward. It is an education process for all of us, and we are transparent in building policy ideas.”

ASA members and stakeholders are encouraged to contact the D.C. staff and share ideas. And there is a new resource available online to those seeking more information: A new, robust “Sustainability and Conservation” section can be found under Key Issues on the soygrowers.com website.

“We are eager to work with everyone. Every region is different, so there are things out there that are working that we want to know about,” says Combelic. “As political climates change, we will adapt and communicate openly to ensure what we pursue works because sustainability affects everything.”