While trade is a no-brainer for those within agriculture, and soybean farmers across the country understand the role of trade in building demand, the federal programs that support it can be difficult to understand. But in a Washington increasingly focused on deficit reduction, communicating the benefits of federal spending programs that support agricultural trade, specifically the Market Access Program (MAP) and the Foreign Market Development program (FMD) authorized in the Farm Bill, is essential.

Often used in combination, there is a difference between the MAP and FMD programs. Through MAP, USDA partners with organizations like the American Soybean Association to share the costs of overseas marketing and promotional activities. MAP- funded programs in consumer advertising, public relations, point-of-sale demonstrations, trade fairs and exhibits, market research and technical assistance help to build export markets for U.S. farm products.

Within the FMD program, USDA partners with commodity or trade associations called “cooperators” to promote U.S. commodities overseas, helping to create and expand long-term export markets for U.S. farm products. FMD funds activities like market research and analysis, and market development activities based on that analysis. ASA is the designated cooperator for soy, leveraging MAP and FMD funding through the U.S. Soybean Export Council (USSEC) and the World Initiative for Soy in Human Health (WISHH).

Both MAP and FMD are structured to share cost with the private sector, which adds $468.7 million annually to the funding provided by the government, and the success of this partnership for soy has been especially clear. Each dollar invested in international marketing returns $34.80 in export revenue and $10.10 in farm profits. A 2016 USSEC study showed international marketing activities increased soybean exports each year by an average of 993,600 metric tons (MT); meal by 808,600 MT; and oil by 149,600 MT.

To demonstrate U.S. soybean farmers’ sustainability, the U.S. soy family, consisting of the United Soybean Board, the American Soybean Association, the U.S. Soybean Export Council, and the state soybean boards, developed the U.S. Soy Sustainability Assurance Protocol (SSAP). The protocol is a certified, aggregate approach to the sustainability performance of U.S. soybean production. The data used is regularly compiled by the U.S. Department of Agriculture (USDA) and other sources that collect it from U.S. soybean farmers through existing government programs. Currently, 98 percent of U.S. soybeans are certified sustainable, according to the SSAP.

USSEC is a prime example of the ways the private sector leverages MAP and FMD funding to expand opportunities for farmers.

In the area of sustainability, USSEC used MAP funding to create the Sustainable U.S. Soy logo and accompanying materials to promote the U.S. Soy Sustainability Assurance Protocol (SSAP) abroad. The SSAP is a benchmarking system that helps industry to ensure U.S. soy is produced following a strong set of conservation regulations and best management practices. In the 2016 marketing year, the U.S. exported 6 million metric tons (MMT) of SSAP-verified sustainable soy, with increases projected for 2017.

Japan has been the longest-running success story for soy and the FMD program. ASA became the first USDA-funded FMD Cooperator in 1956 with the opening of an office in Tokyo. At that time, Japan was importing only small quantities of U.S. soy, but over the years the soy family has worked to expand demand in fields like livestock feed, soybean oil processing, and soyfoods. Today, Japan is our number three market, buying $1.3 billion in U.S. soy in the most recent marketing year.

In Mexico, USSEC provides technical assistance and education and nutrition seminars, which have helped Mexican buyers to gain an appreciation of the benefits of soy for human consumption. Mexico’s retailers now sell millions of liters of soy-fruit beverages, among other products, aiding in the growth of soy exports from virtually zero in the late 1970s to $2.5 billion in 2016.

In China, USSEC continues to work with MAP and FMD funding to expand demand for U.S. beans, even in a market projected to consume 83 MMT of foreign soy in 2017. USSEC focuses on communicating the superior quality and protein profile of U.S. soy over its foreign competitors. Last year, USSEC organized nearly 50 educational opportunities to provide intensive technical training to over 7,000 participants. One such opportunity brought Chinese soybean buyers to ports, elevators, and third-party inspection companies in the U.S., resulting in 17 contracts accounting for more than 3.5 MMT of U.S. beans, valued at more than $10 billion. 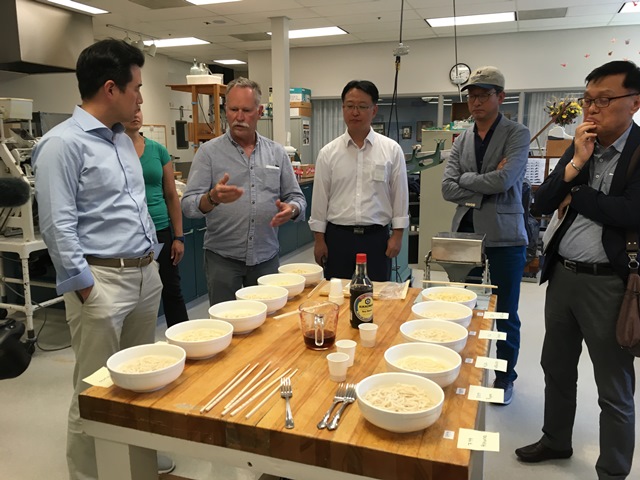 U.S. Wheat Associates technical consultants demonstrate the performance of U.S. wheat flour compared to noodles produced from standard flours. It is an essential type of activity in a highly competitive market, funded by MAP and FMD. Photo courtesy of U.S. Wheat Associates

Success for other commodities

Other crops and commodities have seen success with MAP and FMD too. One cooperator with a unique perspective on the matter is the U.S. Dairy Export Council (USDEC), now led by former Agriculture Secretary Tom Vilsack.

“As secretary from 2008 to 2016, I witnessed export growth across much of U.S. agriculture. Dairy alone saw export volume grow from the equivalent of around 4.5 percent of the U.S. milk supply to as high as 15.5 percent,” said Vilsack, now USDEC president and CEO. “Undeniably the MAP and FMD programs have served as an engine for export growth.”

Vilsack also underscored the benefits of MAP and FMD in building capacity, infrastructure and human capital at cooperators like USDEC. “These funds have allowed USDEC to build and expand U.S. dairy’s international presence through a network of representative offices in key export markets,” he said. “Our overseas teams of marketing professionals, business analysts and regulatory specialists have helped us to address potential regulatory issues that could disrupt trade, target research investments to identify market opportunities and foster relationships with overseas buyers and end-users.”

Peterson cited wheat’s success in averting a crisis in the important Japanese market as a prime example of the value of MAP and FMD. “We have had an office in Tokyo for more than 60 years, so when the discovery of rogue genetically modified wheat threatened a potentially devastating market disruption, we were able to work closely with all the stakeholders to quickly find acceptable approaches that kept our historically largest market open,” he said.

“Even with the market access gains achieved in the Korea-U.S. Free Trade Agreement, U.S. beef faced the extremely difficult challenge of overcoming negative publicity and consumer pushback,” said Philip Seng, USMEF CEO. “MAP and FMD funding helped the U.S. industry regain the trust and confidence of Korean consumers, which was absolutely essential if the U.S. industry was going to capitalize on KORUS (U.S.-Korean Free Trade Agreement). Today, millions of South Koreans enjoy U.S. beef without hesitation, and in fact consume more U.S. beef per capita than any other international destination.” 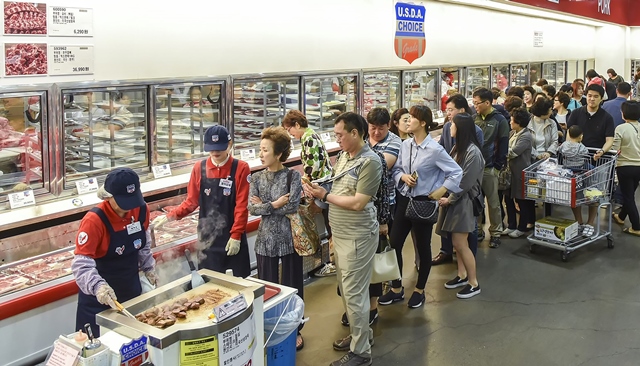 A question of money

But is that helpful funding enough? Many say no. ASA asked in early 2017 for doubled funding in the Farm Bill for MAP to $400 million annually and for FMD to $69 million annually. ASA Vice President John Heisdorffer, who farms in Keota, Iowa, and also serves on the USSEC board, recognizes that doubled funding may be a heavy lift, especially considering that agriculture hasn’t seen the full amount currently authorized for MAP and FMD made available for use.

“MAP and FMD funding hasn’t increased since 2002, however the size of the foreign agricultural market has more than tripled,” said Heisdorffer. “At the same time, we haven’t actually received the full funding for the programs, because of factors like appropriations, sequestration and administrative expenses, and inflation has further reduced the spending power of the funds allocated by almost 30 percent.”

Further threatening the FMD program is the sunsetting of baseline funding for FMD at the end of the farm bill in late 2018, based on a previously enforced law that automatically sunsets all mandatory programs funded at less than $50 million annually at the end of their authorization.

Heisdorffer reminded farmers that the success of funding requests for MAP and FMD will depend on the ability of farmers to connect with lawmakers and share success stories like the ones from soy, dairy, beef and wheat. “As farmers, we have to get better about understanding what benefits and what returns these programs have provided to us,” he said. “Lawmakers aren’t going to double our funding out of thin air; we have to make our case as to why we need them.”

Legislatively, the path ahead for increasing funding allocated to the MAP and FMD programs is not straightforward. While the MAP and FMD fight will likely play out in the farm bill, the standalone Cultivating Revitalization by Expanding American Agricultural Trade and Exports (CREAATE) Act would double funding for MAP to $400 million and for FMD to $69 million by FY2023.The bill was introduced in May in the House by Reps. Dan Newhouse (R-Wash.) and Chellie Pingree (D-Maine), and in the Senate in September by Sens. Joni Ernst (R-Iowa), Joe Donnelly (D-Ind.), Angus King (I-Maine) and Susan Collins (R-Maine).

“American farmers, ranchers, and fishermen in Maine and across our country rely on programs like MAP and FMD extensively to help them expand their customer base and market their products abroad,” said Collins.

Closer to soybean country, Donnelly and Ernst recognize the promise and potential in connecting producers with more chances to succeed abroad.

“It is important that we give our farmers the opportunity to compete and trade in a global market. Programs like MAP and FMD have proven to be effective in opening foreign markets for Hoosier- and American-grown goods,” said Donnelly.

“As American farmers and ranchers are struggling with historically low commodity prices, maintaining and strengthening U.S. trade relationships around the world is critical to the survival and profitability of the agricultural community,” said Ernst. “With over half of the soybeans in Iowa exported, it’s important that we ensure these programs have the ability to continue supporting our agricultural economy, as well as across the United States.”

Still, despite the legislative efforts on the CREAATE Act, the target on all forms of spending from some in Washington presents a real and tangible threat to trade-focused spending programs like MAP and FMD, and with it, the progress that those programs sustain.

Currently, the soybean industry receives $10 million to $12 million annually in combined MAP and FMD funding. Those funds are then matched with $26.5 million provided by the soybean checkoff. Data from Texas A&M show a loss of $230 million in soybean exports and $67 million in farmer profits each year if funding from FMD were eliminated.

“It becomes a matter of losing overseas demand, profits and economic activity at home,” said Heisdorffer. “But worse is the long- term loss of the manpower and infrastructure that our industry has established in those markets over the last 60-plus years. These programs help to sustain foreign offices at USSEC and at other export promotion organizations. They know intimately the markets in which they operate, and if we lose that infrastructure, we can’t reclaim it overnight.”

USMEF’s Seng agreed. “Without MAP and FMD funding,” he said, “USMEF simply could not maintain a consistent, effective presence in our key international markets, or have the experienced, professional staff we need to gather market intelligence and effectively manage promotional activities.”

Mike Miller, a wheat farmer from Ritzville, Wash., and chairman of U.S. Wheat, put a finer point on it. “Severe cuts to MAP and FMD would definitely force U.S. Wheat Associates to close many of its offices and eliminate jobs. Most important, though, cuts would silence the farmer’s trusted voice in so many of our markets.”