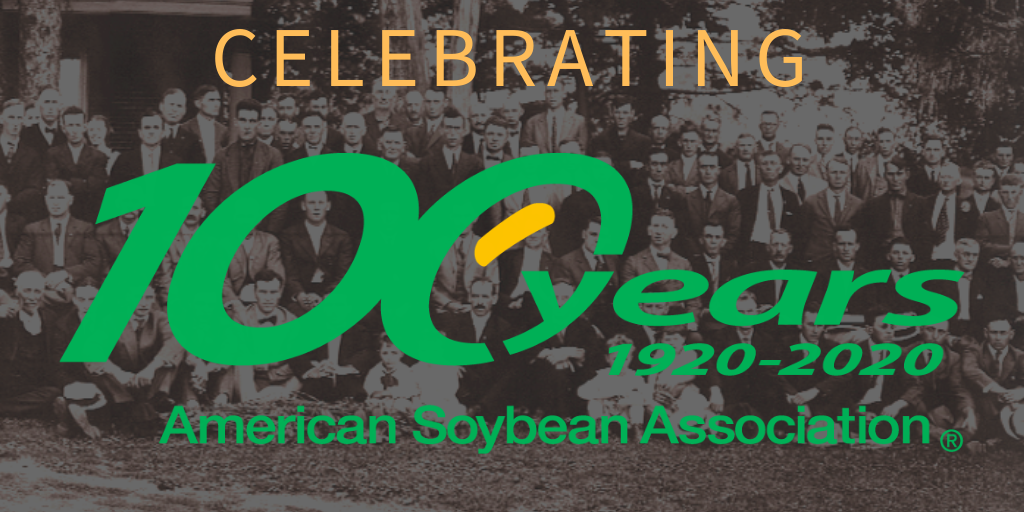 ST. LOUIS, MO—What began on an Indiana soybean farm 100 years ago developed into an organization that quickly grew to be the leading advocate for soybean farmers and foster the building of the U.S. soybean industry— the American Soybean Association (ASA). ASA is celebrating its “First Soy Century” as it recognizes its 100th anniversary throughout 2020.

The roots of ASA were formed when brothers Taylor, Noah and Finis Fouts hosted the first Corn Belt Soybean Field Day at their Soyland Farms operation in Camden, Indiana on Sept. 3, 1920. The event drew nearly 1,000 farmers and their families from six states, who were interested in discovering more about this emerging new commodity called soybeans.

The National Soybean Growers’ Association—later renamed the American Soybean Association—was formed that very day. Taylor Fouts was elected as the first president of the association.

In the century since those humble beginnings on an Indiana soybean farm, ASA has continually been on the leading edge—focused on sustaining and improving the prospects and opportunities for profitability for U.S. soybean farmers.

Throughout the years, ASA has been at the forefront—engaged, committed and working diligently on behalf of U.S. soybean farmers on a variety of issues including:

• Leading the charge to improve soybean grading standards in order to meet the quality demands of domestic processors and international soybean buyers.

• Working with USDA’s Foreign Agricultural Service decades ago to initiate market development projects for U.S. soy and soy products in what was just a few countries starting in the mid-1950s…growing to more than 40 countries in the 1960s…and reaching today’s globally strong position of exporting U.S. soy to more than 100 countries.

• Funding initial research that led to dozens of new uses for soy-based products—from paint to printer’s ink, from plastics to building materials.

• Working with the soybean processing industry to improve the quality, characteristics and value of
U.S.-grown soybeans.

• Fostering the development, growth and engagement of state soybean associations—creating a powerful nationwide network of soybean advocates and farmer-leaders.

• Creating a “voluntary” soybean farmer-investment program in 1948 that eventually led to the establishment of state soybean checkoff programs.

• Advocating and achieving passage of legislation creating a national soybean checkoff—managed by the farmer-led, USDA-appointed United Soybean Board.

• Ensuring that soybean farmers are heard—loud and clear—when key legislation is being developed and debated—from Farm Bills to renewable fuels, from regulatory issues to international trade.

• And most importantly, representing the best interests of soybean farmers at every opportunity.

ASA plans a robust year of activities to celebrate the association’s centennial including:

• High-profile activities at the 2020 Commodity Classic in San Antonio Feb. 27-29, including a gathering of more than 20 former ASA presidents, an impressive exhibit booth featuring historical photos, artifacts and soy treats, and a fun-filled annual banquet focused on the 100th anniversary.
• A policy-focused event on July 8, 2020 at the National Museum of American History in Washington, D.C.
• A dedication ceremony on August 4, 2020 for an historical marker to be located on the Fouts family farm in Camden, Indiana, the site of ASA’s birth in 1920.
• A forward-looking symposium entitled “The Next Soy Century” to be held on the campus of Purdue University on August 5, 2020, featuring an impressive line-up of thought leaders and industry experts.
• A website dedicated to the 100th anniversary at ASA100Years.com.
• A Land’s End web portal through which ASA-branded merchandise can be ordered. A link to this portal is available on the ASA100Years.com website.
• A commemorative book outlining the history and achievements of ASA over the past century.
• Dozens of web videos featuring anecdotes and congratulatory messages from former ASA presidents, policy makers and soybean advocates.
• A wrap-up celebration at the ASA board meeting in December 2020.

For more information on the 100th anniversary of the American Soybean Association, visit ASA100Years.com.