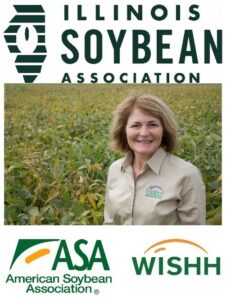 Roberta Simpson-Dolbeare has been elected as the new Chair of the WISHH Executive Committee.

American Soybean Association President Brad Doyle has confirmed the election of ASA’s World Initiative for Soy in Human Health Program officers and committee members for the upcoming year. Officers are Roberta Simpson-Dolbeare (ASA-IL) who will serve as Chair, Morey Hill (IA) as Vice Chair, Bob Haselwood (KS) as Treasurer, and Craig Williams (IN) as Secretary. New to the WISHH committee are Mark Read (IL) and Kevin Kelley (IN). In addition, Bill Wykes (ASA-IL), Roz Leeck (USSEC) and Tony Mellenthin (USB- WI) will serve on the WISHH Committee as non-voting ex-officio representatives for their organizations.

Doyle expressed his continued thanks to soybean growers for leading the governing body of ASA’S WISHH Program. “I’d also like to take this opportunity to thank the Directors and Executive Committee for all the good work you have done through WISHH to develop long-term markets for U.S. soy,” Doyle said. He also extended a special thank-you to outgoing chair Gerry Hayden (ASA-KY) for his many years of service on the WISHH Committee.

WISHH Executive Director Gena Perry also expressed her gratitude to Hayden for steering WISHH throughout the past year while noting the experience Simpson-Dolbeare brings as its new chair. “From traveling around the world speaking to strategic partners to hosting forums on the importance of trade to global food security, Gerry has been an invaluable champion for soybean growers,” Perry said. “As we look towards the future, WISHH’s role as the long-term market development arm of the U.S. soy family will be served well by Roberta’s strong leadership.”