ASA Congratulates the 2021 Regional Winners of the Conservation Legacy Award

Each winner will be recognized at the virtual ASA Awards program on March 16, 2021, at which time, one of the farmers will be announced as the national winner.

A national selection committee, composed of soybean farmers, conservationists, agronomists and natural resource professionals, evaluated nominations based on each farmer’s environmental and economic program. The program is sponsored by ASA, BASF, Bayer, the United Soybean Board/Our Soy Checkoff and Valent. 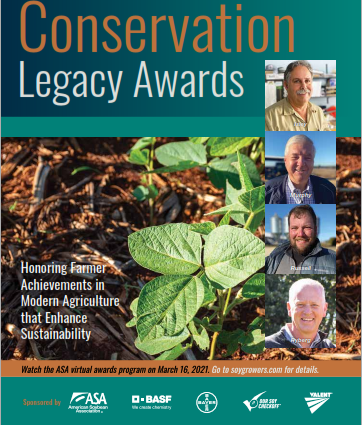 Through the conservation and stewardship practices Russell employs in his operation, he hopes to create a promising chance for those that succeed him.

With tomorrow top of mind, the operation focuses its efforts on taking care of the soil and applying innovative production methods to maintain efficiency. Big Boulder Farms span highly erodible soils that are prone to nutrient losses without proper management. Through extensive use of cover crops, Russell has been able to both improve soil health and increase yields over time on his farm.

Use of innovative technology is also pivotal in adding to the farm’s bottom line. Solar and wind energy combined work to power one of Russell’s hog facilities. And, when all of the equipment works properly, that allows the operation to eliminate its electric bill— a savings that he says helps install more efficient machinery. Read more.

By adopting conservation tillage practices and incorporating cover crops in his management plan, Minnesota farmer Brian Ryberg has been able to reduce operating costs, become a better steward and is now steps closer to achieving his ultimate goal — to leave a legacy for the next generation.

Ryberg and his wife, Sandy, began farming with his parents, Howard and Marilyn, in a 10-year partnership before they retired. Operating as Ryberg Farms, Inc., today the business raises soybeans, corn and sugar beets. Ryberg transitioned the family farm to strip-till and use of cover crops six years ago — prompting a lot of second looks at the operation’s production methods.

The move helped improve both soil structure and water infiltration on Ryberg’s mostly rented farmland, which has grown from 1,500 acres to about 6,300 acres in four counties west of Minneapolis-St. Paul near Buffalo Lake.

Where wind and water erosion had become a common sight, Ryberg says he can now better maintain the earth’s topsoil. Switching gears cut man-hours in half and slashed investment capital by half, further simplifying the operation, he says. Read more.

When Danny Murphy’s grandfather purchased his Mississippi farm in 1944, he knew it would have to be improved for him to be successful.

“His neighbors told him the land was very poor and only fit to hold the world together,” Murphy explains.

Challenged by what he could do to make the land productive, over the years, the elder Murphy worked to establish a foundation of conserving and protecting both soil and water. It’s a foundation his grandsons, Danny and Tommy, continue to build on today.

With conventional tillage practices commonplace across the South, Murphy Farms moved to minimum-till in 1996, as Roundup Ready crops became available, greatly reducing soil erosion, Danny says. The operation further converted to no-till in 2007, spurred by what Murphy says was a feeling they could still do more to protect the soil.

“Yields were consistent with our tilled fields; plus, we were able to reduce fuel, labor and equipment,” Murphy says. “By 2012, we made the full transition to 100% no-till. Now that we have up to 14 crop seasons on some of our acreage, we continue to see the benefits of no-till production and adding cover crops.” Read more.

For the Isley family, stepping forward to make conservation practices a priority on their Michigan farm is far more than happenstance—they want to be a good example to other producers in their area.

From protecting water quality to preventing soil erosion and careful use of cover crops, the Isley operation focuses efforts on one end goal: farm sustainability and profitability, while encouraging others to use conservation practices.

Situated in southeast Michigan near the town of Palmyra, the Isley family’s farming heritage spans more than 150 years and six generations. While the operation was once a diversified crop and livestock farm, today its focus is solely on growing corn and soybeans. Jim Isley currently runs the operation with his wife, Laurie. Their son, Jake, and his wife, LeeAnn, represent the next generation to be actively involved in managing the farm enterprise.

“Our conservation practices of strip-till, no-till and cover crops allow us to build soil structure, soil organic matter and conserve water throughout the growing season,” Isley explains. “All of our acres are located in the River Raisin Watershed, which is part of the Western Lake Erie Basin.”

Lake Erie was identified as an impaired watershed after an algal bloom led to a temporary shutdown of the water supply in Toledo, Ohio, in 2014. The algae problem is complex but is caused in part by increased levels of dissolved phosphorus from agricultural runoff.

“This issue shined a spotlight on farming practices, both positive and negative, being used by farmers in the Western Lake Erie Basin and how those practices may impact water quality,” Isley says. “This gave us a platform to tell our story and show how we can reduce the negative impact on water quality through the use of conservation practices.” Read more.

Watch for a special insert about this year’s winners in this month’s issue of Farm Journal or click here to read more.

Tell us your conservation story and share your thoughts about this award on social media by using #ConservationLegacy, #Sustainability and #ModernAg.