ASA Congratulates the 2022 Regional Winners of the Conservation Legacy Award 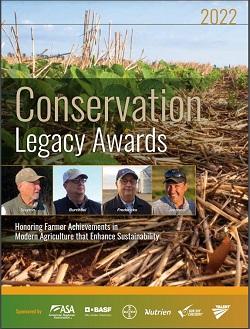 The award winners will be recognized at the ASA Awards Banquet during Commodity Classic, on March 11, 2022. During the banquet, one of the farmers will be announced as the national winner.

Wayne Fredericks calls himself the “accidental conservationist.” When he started farming in 1973, he believed a fully conventional tillage operation was the only way to go. But after nearly 20 years, Mother Nature stepped in and upended those plans on the Osage, Iowa, farm, turning Fredericks into a lifetime proponent of all things conservation.

“Our land needed the plow to raise soybeans successfully, or so I thought,” he says. “For the first 19 years, I plowed all my cornstalks ahead of soybeans, and I worked all my soybean stubble ahead of corn. In the winter of 1991, I was faced with a challenge I had yet to encounter. My farmland froze early, and I had not gotten my cornstalks plowed. What was I going to do?”

On the advice of his John Deere dealer, Fredericks planted his soybeans with a drill the following season. The crop performed well, weeds were under control and a smooth harvest led to strong yields. Fredericks never looked back, and today after almost 50 years farming with his wife, Ruth, the 756-acre farm of corn and soybeans is in a no-till/strip-till rotation. The farm also includes about eight acres of pollinator habitat enrolled in the Conservation Reserve Program (CRP).

“Strip-till corn came about a decade after no-till. The technology evolved and showed very real promise for those of us farming in colder, wetter climates,” says Fredericks. “I live and farm ‘just south of the North Pole,’ where many farmers believe it is too cold to practice no-till or to plant cover crops. I have proved them wrong.” Read more.

“The diversity in our system allows us to consistently be productive because not every year is the same, and not every crop is great. When you have a diverse blend of crops and livestock, you reduce your risk and can take advantage of weather and market changes,” says Brian. “Integration is a long-term goal for us to continue improving our conservation.”

Brian’s great grandfather established the Johnson homestead after moving from Sweden more than a century ago. The original quarter has grown to 1,800 acres of cropland and 500 acres of grassland. Brian’s parents, Mickie and Alan, passed on their passion for resource optimization.

No good deed goes unpunished. Shane Burchfiel is a strong proponent of conservation on his Dyersburg, Tennessee, farm. But it now comes with the added challenge of weed resistance.

“Evidently, we are the mecca for resistant weeds in this part of the world. It started with marestail and now Palmer amaranth. If there’s a resistant weed, we’ve got it,” says Burchfiel. “That creates a different set of challenges, but I know going back to the plow is not the answer.”

Burchfiel is not afraid to try new things—he keeps what works sustainably in his plan and punts any strategies that don’t. No-till is one of the success stories. The Burchfiels became no-till champions in the 1990s, switching 100% of their corn-soybean-double crop-wheat rotation to no-till after a local Extension agent ran an effective trial on the family’s farm.

Burchfiel says initially, his dad found weed control in no-till fields was just as good, if not better, than with conventional tillage. Now, with weed resistance, he is supplementing with other ideas. Read more.

Not many American farmers can say their operation has been in the family since the 1600s. But Grier Stayton, farmer from Lincoln, Delaware, touts his family’s agricultural longevity and attributes its success to the family’s detailed attention to conservation and water management.

“We have an abundance of groundwater and no issues with having a well and being able to tap into the aquifer,” says Stayton. “But we have to be responsible. Part of the farm is in the Chesapeake Bay Watershed and the other side goes to Delaware Bay. I’m right on the crown, so we have many regulations. Water is the primary yield-limiting factor in the sandy loam soils.”

Stayton today is the sole owner of 295 acres—including the family’s original 215 acres. About three-quarters of his tillable ground is irrigated with four center pivot systems. He raises corn, soybeans and alfalfa, and adds that wheat, milo and lima beans have been grown on the farm in the past. He manages about 100 acres of woodlands, including pine and mixed hardwoods.

“I am dependent on availability and quality of irrigation water, and I am willing to at least try new practices as they apply to my operation’s water management. Water conservation, efficient use of resources and generally good stewardship are considerations on 100% of the farm,” he says. “Irrigation allows me to get at least one additional cutting of hay, for example. I don’t over irrigate. I monitor exactly what crop needs are. And of course, weather is a huge factor.” Read more.

Watch for a special insert about this year’s winners in this month’s issue of Farm Journal or click here to read more.