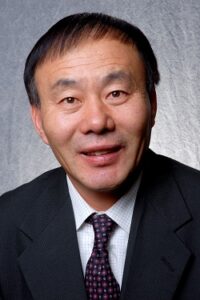 Pengyin Chen, soybean breeder for the University of Arkansas' statewide Division of Agriculture.

The ASA Pinnacle Award is an industry-wide recognition of individuals who have demonstrated the highest level of contribution and leadership within the soybean family and industry through work involving a significant amount of their lifetime.

Dr. Chen, a professor in soybean breeding at the University of Missouri Fisher Delta Research Center in Portageville, Missouri, is recognized as a pioneer in the soybean and soy food industries. His life’s work has aimed to develop genetics that allow U.S. farmers to capture extra value from higher soybean yield and quality.

Since the mid-1980s in Iowa, Dr. Chen’s career in plant breeding and genetics has taken him to Texas, Virginia, Arkansas and Missouri. In the 1990s, Dr. Chen was part of the team that brought the Hutcheson soybean to market, which is known to be an ancestor to nearly 80% of soybean varieties grown in the South.

Throughout his career, Dr. Chen has released a combined total of more than 30 conventional row crop varieties and food grade varieties. He is the most prolific food grade soybean breeder, having developed the highest-protein commercial soybean varieties.

“Dr. Chen is a trailblazer in soybean research and breeding, and his professional accomplishments have benefited soybean growers across the United States,” said ASA Vice President Brad Doyle, who is an Arkansas soybean grower and nominated Dr. Chen for the Pinnacle Award. “His contributions to soybean genetics are a cornerstone to the innovation and progress we see across the industry today.”

Outside the lab, Dr. Chen excels at communicating about soybean genetic advances through field days and meetings with growers, foreign buyers and researchers. He’s written or co-authored more than 225 journal articles.

In addition, Dr. Chen has taught classes in plant breeding and soybean production, helping educate and mentor dozens of students, many now employed by major agriculture companies and universities.

Dr. Chen is an outstanding geneticist known worldwide for his work in plant breeding and soybean genetics—a lifetime of work that has provided significant benefit to farmers and strengthened the U.S. soybean industry.