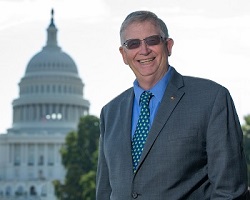 Heisdorffer completed nine years of service on the ASA Board of Directors this past December, during which time he served on a variety of ASA committees, participated in trade missions, testified before Congress and advocated for soybean farmers on many key issues, including the farm bill and trade agreements.

Heisdorffer was elected president of ASA in December 2017, just months before U.S. tariffs were placed on billions of dollars of Chinese goods, resulting in a U.S. China trade war. As ASA president, Heisdorffer expertly handled months of continuing media inquiries—often times from the cab of his tractor—while remaining dedicated to advocating for the needs of soybean farmers amid the challenges presented by the trade war.

He has also served on ASA’s World Initiative for Soy in Human Health (WISHH) committee, the U.S. Soybean Export Council board and as a member of the National Biodiesel Board.

Heisdorffer has a clear record of strong and steady state and national leadership that has immensely benefited U.S. soybean farmers.