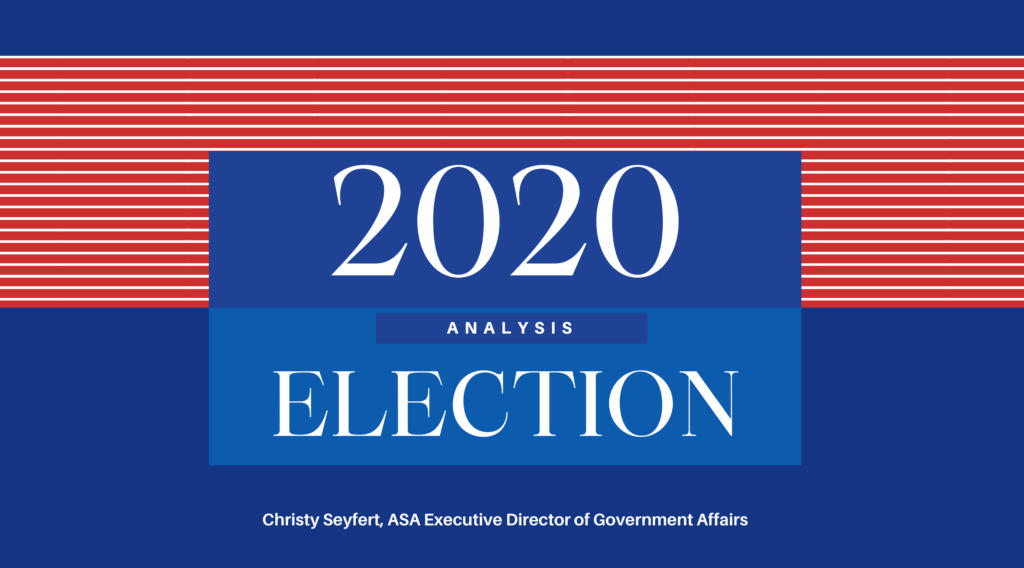 Election Day 2020 has passed without offering full clarity about the nation’s path forward in 2021.

The presidential race proved closer than analysts expected, and it may be days or weeks before we know the final outcome. When that time arrives, we will learn more about changes that could be in store – either as a transition from one president to the next, or changes in agency personnel that may or may not occur in the president’s second term.

Control of the Senate is not yet finalized but appears to trend toward continued control by Republicans. One tight race closely tracked by ASA was that of Senator Joni Ernst (R-IA), who won her election. Two “Ms. Smiths” will return to Washington, both Senator Tina Smith (D-MN) and Senator Cindy Hyde-Smith (R-MS). In Kansas, Representative Roger Marshall (R-KS) won the open seat soon to be vacated by Roberts. Several Senate races remain outstanding, and the outcome of one – and possibly both – in Georgia will be determined by a runoff on January 5, 2021.

The House is expected to remain in Democratic control after races are finalized. In addition to Peterson’s defeat, Representative Abby Finkenauer (D-IA) lost a close race.  Those victorious in tight races include:  Representative Cheri Bustos (D-IL), Don Bacon (R-NE), Troy Balderson (R-OH), Rodney Davis (R-IL), Angie Craig (D-MN), and Cindy Axne (D-IA). Several House races remain outstanding, and the outcome of a Louisiana House race will be determined by a runoff on December 5, 2020.

If you are an ASA board member or state affiliate staff member, you are welcome to participate in a call on November 13 to learn what we know at that point and what we are watching as 2020 comes to a close.