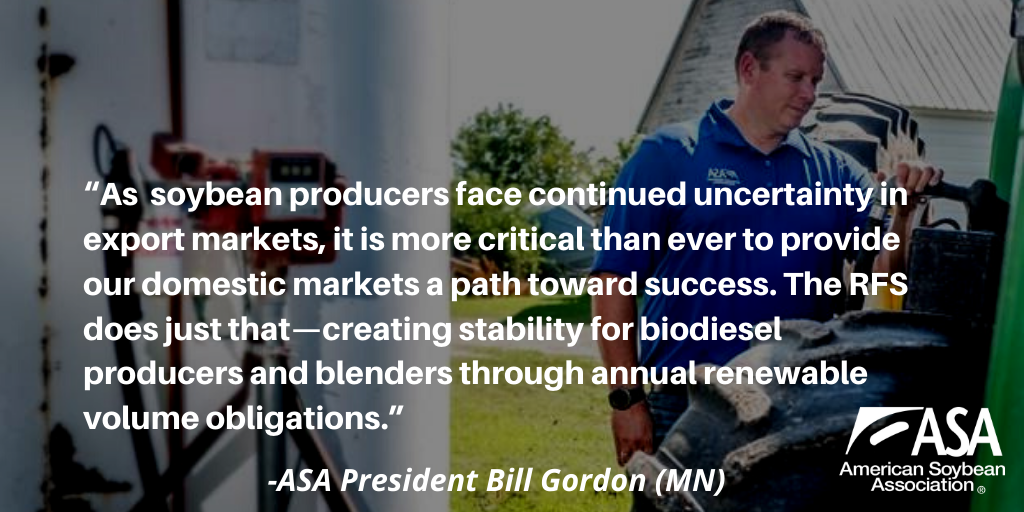 In a letter to EPA Administrator Andrew Wheeler, ASA calls on EPA to apply the U.S. Court of Appeals for the 10th Circuit's ruling on exemptions to small refineries whose temporary exemptions had lapsed earlier, to all pending SRE petitions—including the 52 retroactive SREs recently posted to its dashboard that date back as far as 2011.

“The approval of these gap filings would deal a devastating blow to soybean farmers and biodiesel producers by stifling demand for biodiesel,” ASA President Bill Gordon, a soybean grower from Worthington, Minnesota states in the letter. “Simply put, protecting the RFS is a priority of our organization. We urge you to consider the perspective of the soybean farmer as EPA addresses this gap filing issue.”

Biodiesel is an important market for soybean farmers, providing value for surplus soy oil that is a coproduct of soybean protein meal. The RFS is critical to revitalizing struggling farm economies and further diversifying the U.S. fuel supply. Prolonged SRE uncertainty continues to stifle investment in American biofuels, destabilize agriculture markets and hurt U.S. soy growers, who are already grappling with supply chain disruptions due to COVID-19, the U.S.- China trade war, and other causes of instability.

“As soybean producers face continued uncertainty in export markets, it is more critical than ever to provide our domestic markets a path toward success,” Gordon states. “The RFS does just that—creating stability for biodiesel producers and blenders through annual renewable volume obligations.”

ASA appreciates EPA’s transparency in listing gap year petitions on its dashboard, but moving forward, urges the petitions be denied, as they remain an existential threat to the biodiesel industry and soy growers who rely on the certainty of the RFS to sell their soy oil to biodiesel producers.