With the support of state soybean organizations, the American Soybean Association’s World Initiative for Soy in Human Health (WISHH) Program and the Northern Crops Institute (NCI) have risen to the challenges of COVID-19 travel restrictions. To date, they have delivered soy protein food, feed, and trade virtual training to participants from 12 countries where WISHH works. 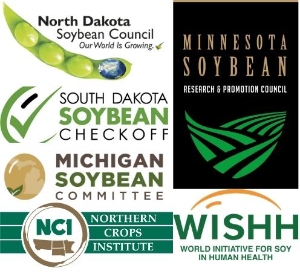 “COVID-19 elevated the importance of finding new ways to deliver nutritious sources of protein to developing and emerging economies in Africa, Asia and Latin America,” said WISHH Executive Director Liz Hare. “Global trends make WISHH’s work more valuable than ever to both U.S. soybean growers and the entrepreneurs and institutions we work with to innovate with soy protein in foods and beverages, as well as livestock, poultry, and fish feeds.”

“NCI’s team had to convert our face-to-face training courses and materials into webinars, videos, updated manuals and more so we could deliver knowledge about soy protein to WISHH’s entrepreneurs in their home countries,” said NCI Director Mark Jirik. “The trainees’ responses to surveys show that they gained new solutions that can help them progress until in-person training at NCI is once again an option.”

An example is WISHH and NCI hosted a two-day November webinar-version of NCI’s popular INTSOY Workshop for a trade team of WISHH’s new food and beverage industry key accounts from Panama, Dominican Republic, Nicaragua, Honduras, Guatemala, El Salvador and Costa Rica. A record 81 people registered for the training that WISHH organized by leveraging support from state soybean checkoff organizations with U.S. Department of Agriculture (USDA) Market Access Program funding. WISHH also included the Latin American company representatives who are participating in WISHH’s United Soybean Board-funded initiative that mentors entrepreneurs. Attendees from three of the countries were so eager for the information that they joined even as a hurricane swept through Central America.

WISHH had planned to bring its Ugandan supply chain partner and customers to NCI in 2020 so they could receive training on best practices for baking with soy flour. The training would add value--as well as nutrition--to breads in a country where 50% of household budgets are spent on food and beverages. NCI produced demonstration videos that have helped the bakers learn the correct amount of water to add to soy flour and more. WISHH hopes to send the entrepreneurs to NCI next summer where they can make further in-depth progress in NCI’s training facilities in Fargo.

Full-fat soybean meal is also of interest in Asia, so WISHH leveraged its funding from the USDA to support NCI training of nine Cambodian feed millers who work with WISHH.

Examples of the trends that are driving demand for WISHH and NCI’s trainings include:

• Trade access during COVID-19 is critical and is repeatedly emphasized by global leaders. Production, marketing, and distribution is an essential service everywhere to keep trade corridors open and ensure the continuous functioning of the critical aspects of food systems in all countries.
• According to the World Plant-based Protein Industry Report 2020-2025, the global plant-based protein market size is projected to grow from USD 10.3 billion in 2020 to USD 14.5 billion by 2025. The food segment is projected to dominate the plant-based protein market throughout the forecast period. The liquid segment is projected to grow at the highest growth rate due to demand for plant-based dairy, food & beverages, and nutritional supplements
• Overall growth in the volume of meat consumption in developing countries is expected to rise at approximately five times that of developed countries, according to the Agricultural Outlook 2020-2029. Released July 13, the Organisation for Economic Co-operation and Development (OECD) and Food and Agriculture Organization (FAO) of the United Nations report also finds growth in feed consumption is mainly due to the ongoing expansion of the livestock herd and aquaculture production in low- and middle-income countries.
• The FAO State of the World’s Fisheries and Aquaculture (SOFIA) 2020 report cites a 527% rise in global aquaculture production from 1990 to 2018. It states, “The priority should be to further develop aquaculture in Africa and in other regions where population growth will challenge food systems most.”

Northern Crops Institute (NCI) supports regional agriculture and value-added processing by conducting educational and technical programs that expand and maintain domestic and international markets for northern-grown crops. NCI is funded by the states of Minnesota, North Dakota and South Dakota and commodity groups in those states and Montana.