ASA’s Heisdorffer Testifies on Importance of Trade with China 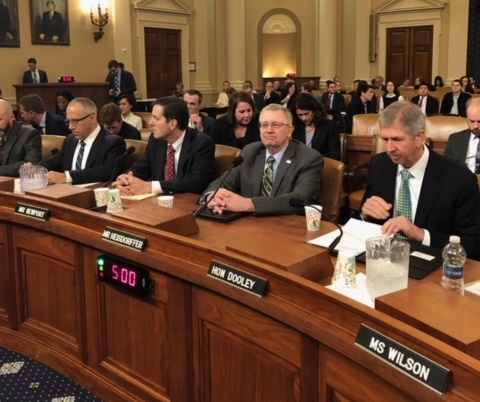 ASA President John Heisdorffer testifies on potential impacts of Chinese tariffs before the House Committee on Ways and Means.

Heisdorffer, who farms in Keota, Iowa, highlighted the importance of maintaining China as a robust market for U.S. soybean exports, and the lasting effects implemented tariffs and a trade war would have on soybean farmers.

“Through a long-term and comprehensive program to demonstrate the value of soy-based feeds, ASA and the U.S. Soybean Export Council helped build demand for soybeans to the level of Chinese imports today,” Heisdorffer said.

In 2017, China imported 1.4 billion bushels of U.S. soybeans, 62 percent of total U.S. exports and nearly one-third of our annual soy production. According to a study conducted by Purdue University, soybean exports to China could drop dramatically if China chooses to impose a 25 percent tariff on U.S. soybeans.

“Retaliation by China against U.S. tariffs would undercut prices received by soybean producers and further hurt the already depressed farm economy. Crop prices are down 40 percent since 2013, and farm income has fallen by 50 percent. Operating margins are slim, and farmers cannot absorb additional hits to the farm economy.

“As producers of the Nation’s number one agricultural export, soybean farmers want to be an essential part of helping lower our trade deficit with China. We believe that expanding market access can play a vital role in increasing our agricultural trade surplus. We ask this Committee and Members of Congress to help allow soybean farmers be part of the solution instead of collateral damage from a potential trade war,” concluded Heisdorffer.