Double-cropping allows an extra crop to be produced within a growing season. Given the relatively fixed amount of agricultural land available, double-cropping allows increased agricultural production within the area constraint since two crops are harvested. And, double crops tend to have lower applications of fertilizer and herbicides. Lower input volumes and lack of extra land cost can offset what is generally a lower yield from the second crop. The winter crop also combines cover crop benefits with a cash crop.

Double-crop soybean acreage has fallen in the U.S. since 2013 (Figure 1) despite a general increase in overall soybean acres. The double-crop area has oscillated around the 4 million acre range for several years. The share of total soybean acres that are double-cropped has fallen from 10% in 2013 to around 5%. Following another crop (FAC) insured acres are about half of planted [1]. 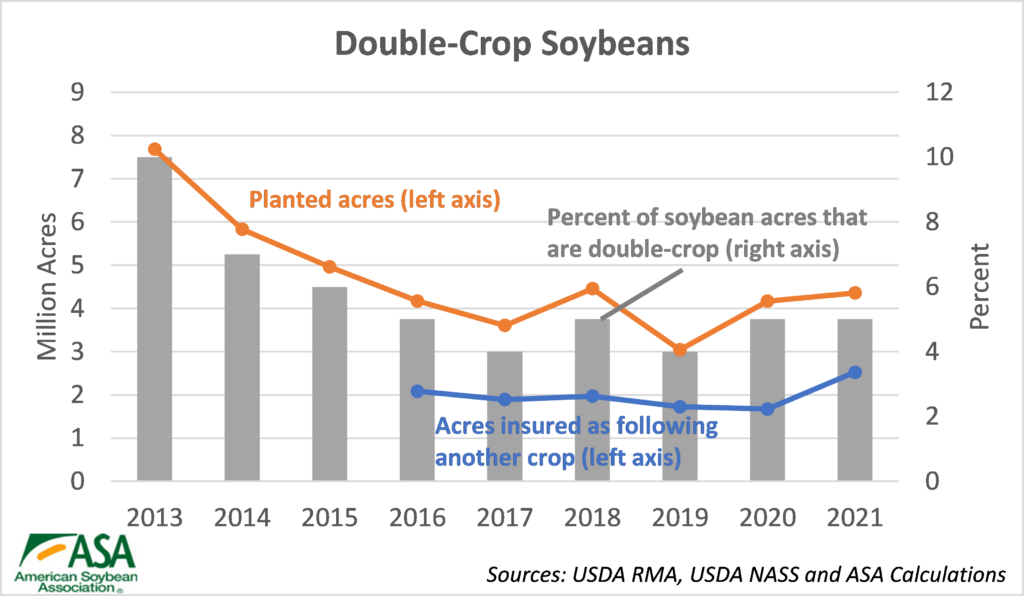 Over the past five years, North Carolina has had the most double-crop soybean acres with over 500,000 on average. Also leading were Illinois, Kentucky and Tennessee. As a percent of total soybean acres, Virginia led with almost 39% of soybean acres being double-cropped. Oklahoma, Georgia and North Carolina also topped the 30% threshold. Southern portions of the U.S. have a longer growing season, which better accommodates fitting a second crop into the growing season. As a result, the states further south tend to have a higher percentage of double-cropped beans. 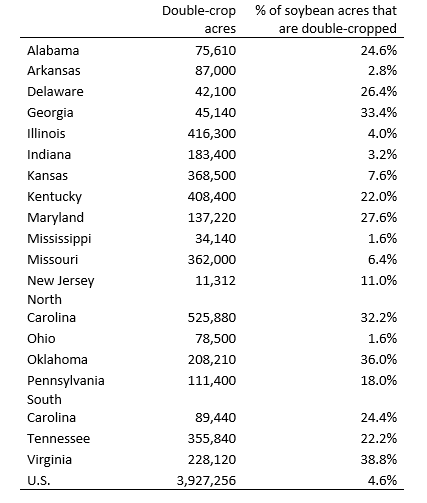 Note: The states shown are only those where NASS has reported double-crop acres except Louisiana and Texas, which are not shown due to years with unreported data. The U.S. will not add up to the sum of states due to rounding errors

Crop insurance data provides a more granular look at double-cropping (Figure 3). The largest concentrations in this data set are in northern Oklahoma, southeast Kansas, southwest Missouri, southern Illinois, southern Kentucky and northwest Tennessee. Notably absent are some of the largest double-crop states, including North Carolina. RMA has determined growing conditions are favorable enough for FAC soybeans that they do not distinguish between them and single crop beans starting in Alabama and moving northeast through the Atlantic seaboard, even though the practice is insurable (Figure 4). This is a large part of the reason that the number of insured acres in Figure 1 is so much lower than the number of double-crop acres. Many of the large states simply do not have any distinguishment between the two practices for insurance purposes. 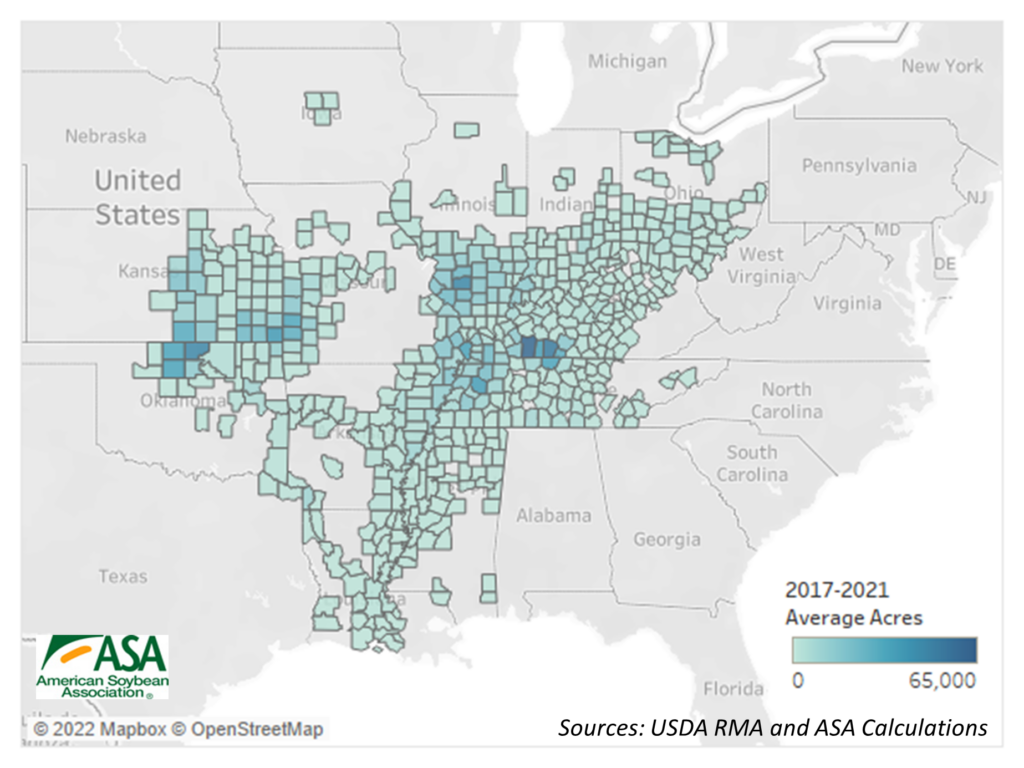 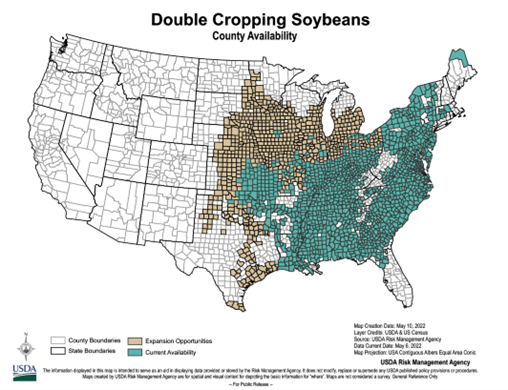 The White House has recently announced a plan to expand the number of counties eligible for double-crop crop insurance (Figure 4). This could potentially increase the number of eligible counties by about 50%. While producers can potentially sign a written agreement with USDA Risk Management Agency to provide coverage for the crop, expansion would negate the need for the written agreements but can potentially change how Actual Production History (APH) yields are calculated.

Double-crop soybeans are an efficient use of land resources. While currently only about 5% of the U.S. soybean area, this results in millions of acres of soybeans each year. Double-cropping tends to be more concentrated in the southern U.S., but USDA is reviewing new areas proposed for expansion. This has the potential to improve access to crop insurance for the practice in these areas, which could assist expansion.