On Sept. 17, the administration announced the second round of the Coronavirus Food Assistance Program (CFAP2) to help the agricultural sector sustain losses from the pandemic. Without government payments in 2020, net cash income is expected to drop by about $10 billion. Severe disruptions, including reduced disposable incomes, supply chain bottlenecks and changed food consumption patterns, have negatively affected prices in the agricultural sector. This impact, on top of several years of a trade war and the significant drop in international soybean demand through African Swine Fever’s devastation of China’s swine herd, necessitated the additional program.

Commodities eligible for CFAP2 fell into one of three categories: major commodities that experienced at least a 5% price reduction, flat-rate crops and specialty crops. Flat-rate crops receive $15 per acre. Since soybeans experienced a 7% price decline between mid-January and late July, it fell into the major commodities that experienced at least a 5% decline, and soybean producers receive the higher of $15 per acre or $0.3132 multiplied by their crop insurance APH yield per acre. If an APH yield is not available, 85% of the weighted 2019 Agriculture Risk Coverage-County Option benchmark yield is used. The $.3132 per bushel rate is achieved by multiplying the price drop of $0.58 per bushel by the nationwide marketing percentage for soybeans of 54%. For more examples of the calculations and more details, please click here.

Although individual data is not publicly available for CFAP2 analysis, what is available can still reliably be used to analyze the effects of CFAP2 components and the geographic distribution of payments. The USDA Risk Management Agency reports county level data about crop insurances purchases. This information can be used to calculate the average soybean APH yield by county. About 75.1 million acres were insured to soybeans in 2020 compared to 83.8 million that were planted. Since there were very few prevented plant acres this year that would exclude producers from CFAP2, the crop insurance data captures the bulk of what will be used to calculate the payments. Figure 1 shows the geographic distribution of the payments by county using this data. Many of the counties receive the minimum of $15 per acre, although Kansas, Nebraska, Iowa, Minnesota, Illinois, Indiana and Ohio have multiple counties exceeding it. The higher end of the per-acre payment distribution is in the lower $20 per acre range. Keep in mind that the figures using the average APH yields will likely be lower than the county average payment using individual yields. To demonstrate, an APH yield of 47.9 bushels per acre would generate a payment of exactly $15 per acre before the cup is applied. If the county average APH were 47.9, very likely some producers would have APH yields below this but would still receive the $15 per acre. Producers above the average would receive more than $15 per acre, so the average county payment would exceed the rate with the county average APH yield. 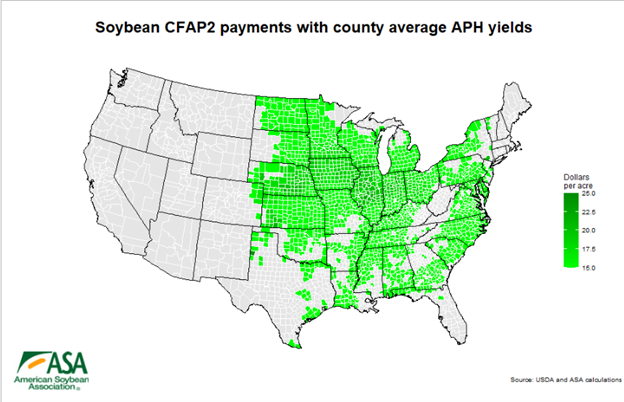 Planted acres reported to the Farm Service Agency of USDA will be used to determine the CFAP2 payment per farm and total 80.8 million acres to date for soybeans. If the county totals from this dataset are multiplied by the estimated county rates, total payments are $1.330 billion. USDA estimated that soybean CFAP2 payments would total $1.386 billion. The reasons for the discrepancy are twofold. First, the USDA was likely using individual APH yields, which are not available to the public. This would make total payments higher. Second, they also calculated the effect of payment and Adjusted Gross Income limits, which would bring that total back down.

Figure 2 shows how the two components of the payment affect the total. The graph orders the estimated county rates and plots them against the planted acres in the county. However, the planted acres are cumulative, meaning they are added to the planted acres for all of the other counties that have a lower payment rate. The raw payment rate before the $15 cup is shown in green, and the effect of imposing the $15 minimum is shown in orange. As can be seen in the chart, about 35 million soybean acres will benefit from the$15 per acre payment cup. The area of each series in the graph corresponds to the total effect of the component. Even though 43% of the acres benefit from the cap, removing it would only reduce total payments by $86 million (6%). The actual amount could be higher due to the previously mentioned averaging issue. On the other hand, the price-based component determines $1.244 billion of the CFAP2 soybean payment (94%). If soybeans had not experienced at least a 5% price decline, they would have been a flat-rate commodity and received $15 per acre. In this case, the payments would have totaled $1.211 billion. 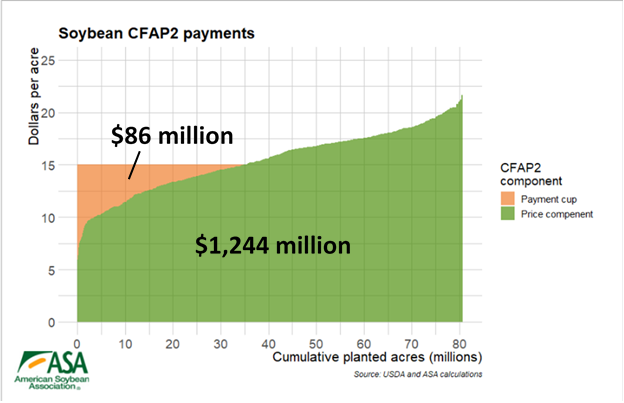 Given the nature of the CFAP2 payment formula, total soybean payments will be highly correlated to the production of soybeans (Figure 3). Illinois and Iowa will likely receive the most payments followed by Minnesota and Indiana. Note these estimates are for soybeans only, so the total CFAP2 payment distribution will vary from this. Based on the available data, at least 33 states will receive payments for soybeans. Some of these states display a “0” in Figure 3 due to rounding. 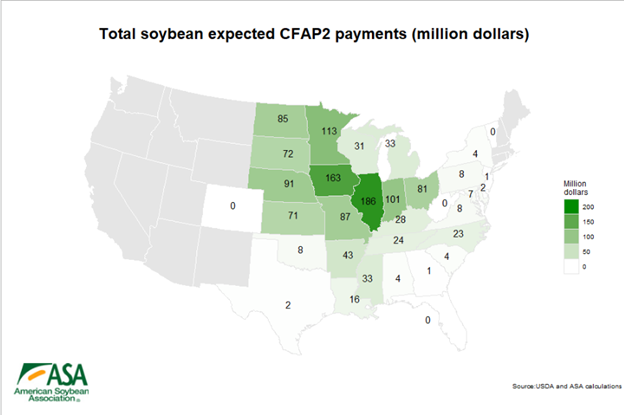 In summary, CFAP2 is helping to provide much needed support to soybean producers. The $15 per acre floor will be beneficial to many. Even so, its contribution to the total payments for soybeans is quite small. States that will receive the most benefits will be those that produce the most soybeans. However, soybean producers in at least 33 states will likely receive assistance through the program.