The recent rally in the soybean market has been a welcome change. The average farm price for soybeans for the past five years is 27% lower than the five prior to them. The downward movement in prices was amplified starting in 2018 with trade friction with China coupled with the outbreak of African Swine Fever in the country. As trade tensions lessened and China’s hog herd recovered, the global Covid-19 pandemic struck. However, the situation has improved and demand for U.S. soybeans skyrocketed as South America ran out of beans to export. This resulted in the nearby soybean futures price rising from around $8.50 per bushel to almost $14.40 per bushel (Figure 1). Despite the economic philosophy that a rising tide lifts all boats, the rally occurred during a point in the marketing year that severely lessened producers’ abilities to fully realize the higher prices. 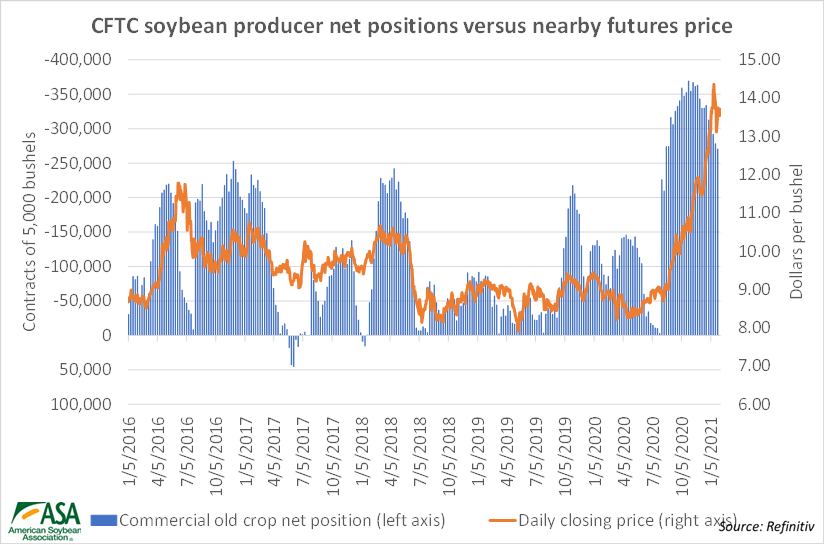 The biological delay between planting soybeans in the spring and harvesting in the fall creates price risk for producers. Decisions are made and costs incurred at planting based on what is known at that point. However, prices can move substantially before the crop can be harvested and sold. Part of the solution to this problem of risk is to lock in prices before harvest through legally binding contracts. While pre-sales in the U.S. are not regularly tracked by any public source, a couple of surveys provide a snapshot of their utilization. One[1] found that among Midwestern grain farmers, 26.9% use option puts, 24.5% used futures markets and 69.1% used forward contracts. Note that these sum to more than 100%, as more than one can be used by a producer. Both futures markets and forward contracts lock in a specific price. This protects against a price drop but also prevents price increases from being realized. Another survey of corn producers, primarily in Illinois, found that 41% of corn production was already priced by July 1 through forward or futures contracts. Unfortunately, the soybean price rally didn’t start until late August, so any of the crop sold before harvest wouldn’t have realized the higher prices.

In addition to providing the nearby futures price, Figure 1 also shows the net commercial positions in the Chicago Mercantile Exchange soybean market. This data is released weekly by the Commodity Futures Trading Commission (CFTC). The commercial traders are anyone with a hedging position, i.e., those who have a stake in the physical commodity. This includes producers, merchants, processors and soybean users and excludes speculators. Even if a farmer doesn’t use a futures contract to pre-sell, an elevator that has agreed to buy the crop in a forward contract may hedge its position in the futures market, which would show up in this data. The net position is purchases (longs) minus sales (shorts). A negative value indicates more sales than purchases. A more negative commercial net position can loosely be thought of as more sales tied to the physical commodity, soybeans in this case. As can be seen in the chart, sales tend to be highly correlated with the price. Unsurprisingly, as the price rises, so does the volume of sales. When prices fall, sales also go down.

However, 2020 had a slightly different pattern. Sales through the summer were quite high, likely because soybean stocks were large and storage was needed for a crop that was expected to be large at that time. Starting in late December, commercial net long positions started dropping as prices kept increasing. Prices are a signal to supply more and consume less. It appears that producers were unable to supply more at this time, indicating that much of the soybean stocks were already committed. Interestingly, this phenomenon emerged as soybeans struck $12 per bushel, hinting that producers have had limited sales above that amount.

Likewise, USDA sales data indicate much of the soybean crop has already been sold. After the completion of the September through August marketing year, USDA releases the percent of the annual sales by month. The sale is recorded in the month the crop is delivered, not the month in which it was contracted. However, the price recorded by USDA is the sale price, not the current market price. For this reason, USDA monthly farm prices can lag the cash markets.

Table 1 shows the cumulative percent of reported sales of U.S. soybeans by producers. For example, in the 2010/11 marketing year 75.4% of the crop had been delivered by the end of January and 80.9% by the end of February, indicating that 5.5% of the year’s total was delivered in February. The column on the far right shows the average across the past 10 marketing years. Over this period, 53% was delivered by the end of December and 67% by the end of January, indicating that two thirds of the soybean crop has left producers’ possession at this point, on average. Keep in mind that since the numbers are for contracted but undelivered beans, they represent the minimum percent of the crop that is priced at that point.

September through December implied soybean use for the United States is at a record level. Figure 2 divides that implied level for the first quarter by total use for the crop year. This indicates that 38% of the 2020 crop was used in the first quarter. The orange line overlays the percent sales through December from Table 1. The sales (deliveries) for the first quarter are highly correlated with the use. Using a simple linear regression for the 2010 to 2019 time period and the January WASDE projected ending stocks for 2020/21, first quarter sales for the 2020/21 marketing year are estimated to be 55%, which is above the 53% 10-year average pace. As a result, less than 45% of the soybean crop is expected to have been unpriced at the beginning of 2021 before prices reached their peaks. Unfortunately, it is not possible with these data to determine how much less. 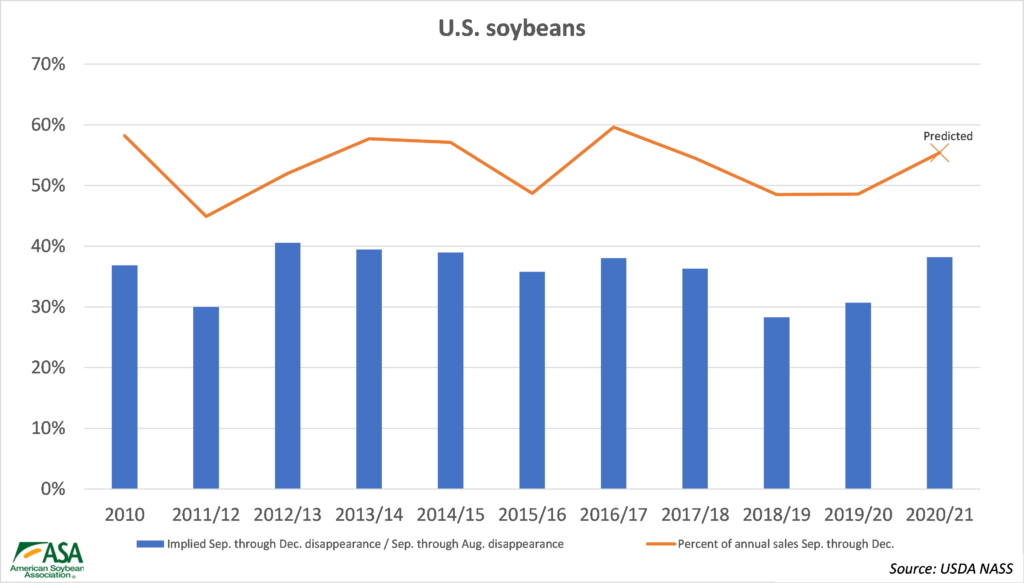 While the recent rally in soybean prices has been helpful to producers, its timing has presented limited opportunities for them to capitalize on it. Surveys show that most producers use tools to lock in prices and that much of the corn crop is already pre-sold in the middle of the growing season. USDA data indicates that much of the crop had already been delivered before the price peak was reached. CFTC data implies that sales tied to physical soybeans were also falling off in the midst of the rally. The January WASDE has the projected season average price received by producers at $11.15 per bushel, but that would require an average price received by farmers of $12.60 per bushel for January through August based on the 10-year average sales pace. Evidence indicates that sales were already slowing down before prices reached those levels. While prices for the new crop in 2021 are up, the November contract is $2.15 per bushel less than the nearby March contract. Unfortunately, not all boats will float higher with the rising tide.