Soybean prices have seen a remarkable recovery the past year after an extended period of depression. While multiple factors have contributed, including China’s renewed demand for feed after its swine herd largely recovered from African Swine Fever, a component is additional demand from renewable diesel. This biofuel is different from biodiesel and is a rising source of soybean demand.

While most people have probably heard of biodiesel, renewable diesel is a separate fuel with a different production process. Chemically speaking, biodiesel is a mono alkyl ester of long chain fatty acids. In simple terms, a fat or oil (e.g., soybean oil) is reacted with an alcohol like methanol in the presence of a catalyst. This process yields biodiesel and a primary co-product, crude glycerin. The latter has thousands of uses, including as an energy source for livestock. Although any fat or oil can be utilized as a feedstock, vegetable oils are ideal inputs for the production process. Biodiesel is typically used in blends of up to 20% (i.e., B20) with petroleum diesel fuel.

Sustainable (synthetic) aviation fuels (SAF) are the most recent addition to the biofuels discussion. Although large-scale, commercial development of SAF has not begun, it is worth mentioning. There are multiple pathways that have an approved fuel standard, however only one of those currently approved pathways utilizes fats and oils. That pathway is similar to the renewable diesel process and will use the same feedstocks such as soybean oil, canola oil, animal fats, distillers corn oil, and used cooking oil. The process is more severe to produce SAF that meets the extreme cold flow requirements of jet fuel of around -40F, which also tends to produce more co-products.

Biodiesel, renewable diesel and SAF qualify for several state and federal programs. The federal Renewable Fuel Standard (RFS) requires a portion of fuel in the U.S. contain renewable fuel that meets emission reduction thresholds. When eligible renewable fuel is blended with petroleum fuel, a credit is generated that can be used to meet the RFS obligation for the refinery. Alternatively, this credit can be sold to another refinery to meet their obligation, thereby creating a price for the credit. The second program is California’s Low Carbon Fuel Standard (LCFS). This program requires a reduction in the overall carbon intensity of fuel consumed in the state over time. Like the RFS, credits can be generated from exceeding the requirement and traded. Several other states are adopting LCFS programs, but they are not at the scale of California’s at this time. Last of all, the biofuels are eligible for a blenders tax credit of $1.00 per gallon. This tax credit is currently set to expire at the end of 2022.

While many different feedstocks can be used to produce the biofuels, they do not always receive equal treatment under the different programs. For example, renewable diesel made from canola oil is not currently eligible for the RFS (biodiesel is eligible). Under the RFS, a biofuel’s credit value is not dependent upon the feedstock used as long as it is an eligible feedstock. The same is not true in California’s LCFS program. For example, used cooking oil is scored to have a lower carbon intensity in California (relative to vegetable oils such as soybean oil) as it is viewed as a waste product. It subsequently generates a larger credit. This provides a strong incentive for biofuel producers to purchase used cooking oil as a feedstock. However, the available supply is finite, and biofuel producers are planning expansion principally around soybean oil to meet the volumes needed to increase production. 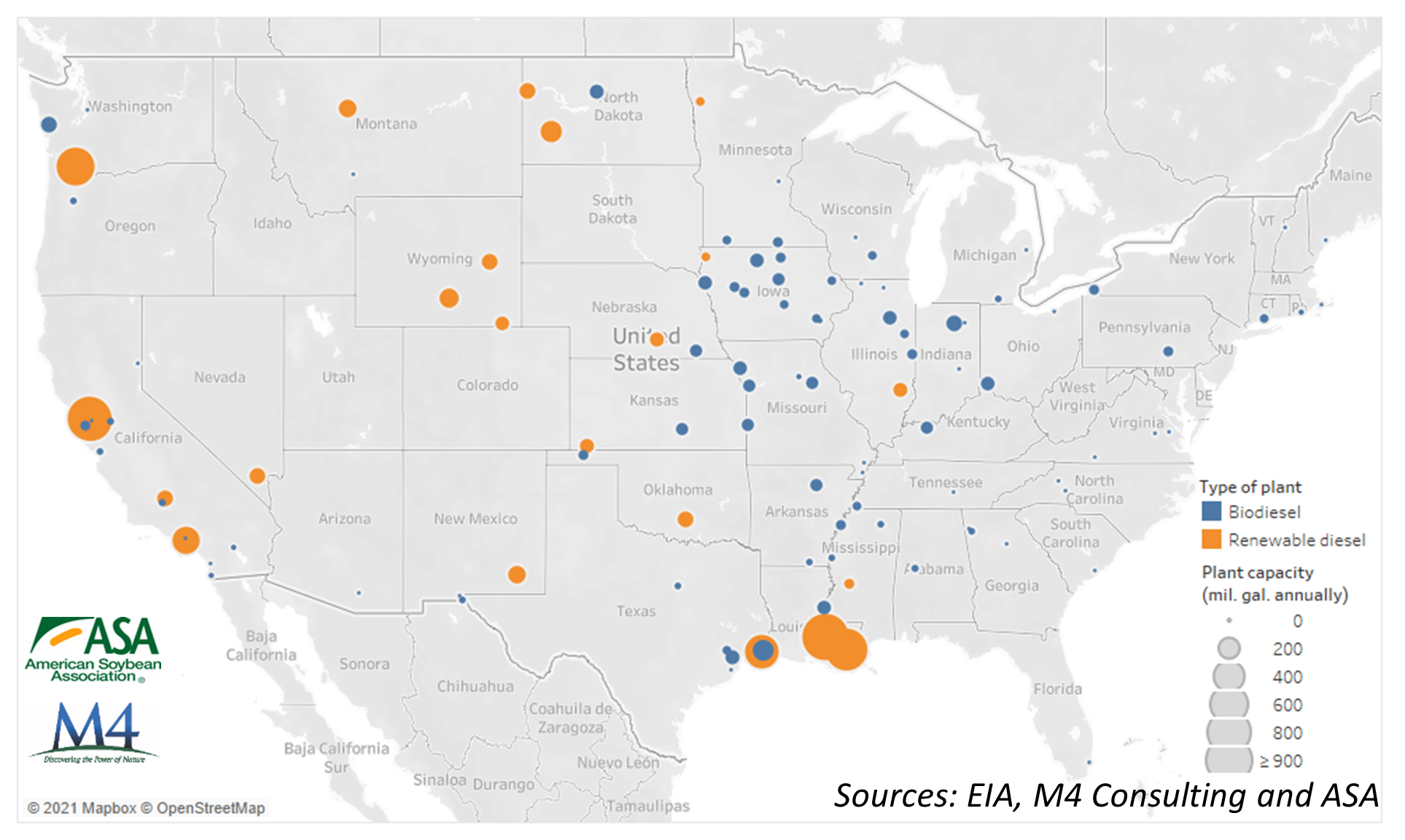 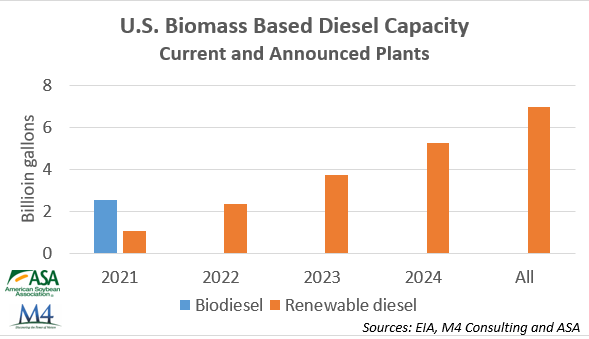 The rising demand from renewable diesel has been a factor changing the recent relationship between soybean oil and soybean meal prices. The extra demand for the oil has strengthened the soybean crush margin which has increased the volume crush and supported soybean price. Soybean oil constitutes about 20% of the soybean with soybean meal composing the other 80%. The evolving demand has resulted in soybean oil now representing about 50% of the value of a soybean compared to around 30 to 35% historically. This new source of demand is helping to draw additional investment into soybean crushing and soybean oil refining which will help support soybean prices into the future.

(1) ASTM International is an international standards organization that develops and publishes voluntary consensus technical standards for a wide range of materials, products, and services.