USDA will release its first soybean yield estimates based on producer surveys and field sampling next week, August 12. This data will provide the first on-the-ground, official glimpse of the size of the 2021 soybean crop. Until now, USDA’s yield estimates have been based on statistical models. Analysts and markets will be closely watching the report, which could have a large potential impact on prices given the tight stock situation.

Until August of year, USDA’s World Agricultural Outlook Board (WAOB) projects the soybean yield for the crop in the ground using a statistical model that considers the yield trend and weather variables for seven states: June precipitation shortfall (if it falls below a threshold), July and August precipitation, July and August temperature for Iowa, Illinois, Minnesota, Nebraska, Indiana, Ohio and Missouri. This model produced the 50.8 bushels per acre yield reported in the July WASDE. One factor to consider is that the July and August weather data were not available yet to incorporate into the projection. The weather data help with the model estimation, but only the June precipitation shortfall is available by July. As a result, the July 50.8 bushel yield is mostly a trend yield.

Weather conditions across the U.S. have been mixed, however. While parts of the growing region have been wet, others have been affected by drought (Figure 1). North and South Dakota have had areas in extreme and exceptional drought this year. Unfortunately, these conditions have shifted east into parts of Minnesota. Additionally, a large swath of Iowa is currently experiencing severe drought. Given that July through August is a critical time period for the soybean yield determination, the conditions being experienced now will likely affect the final yield. 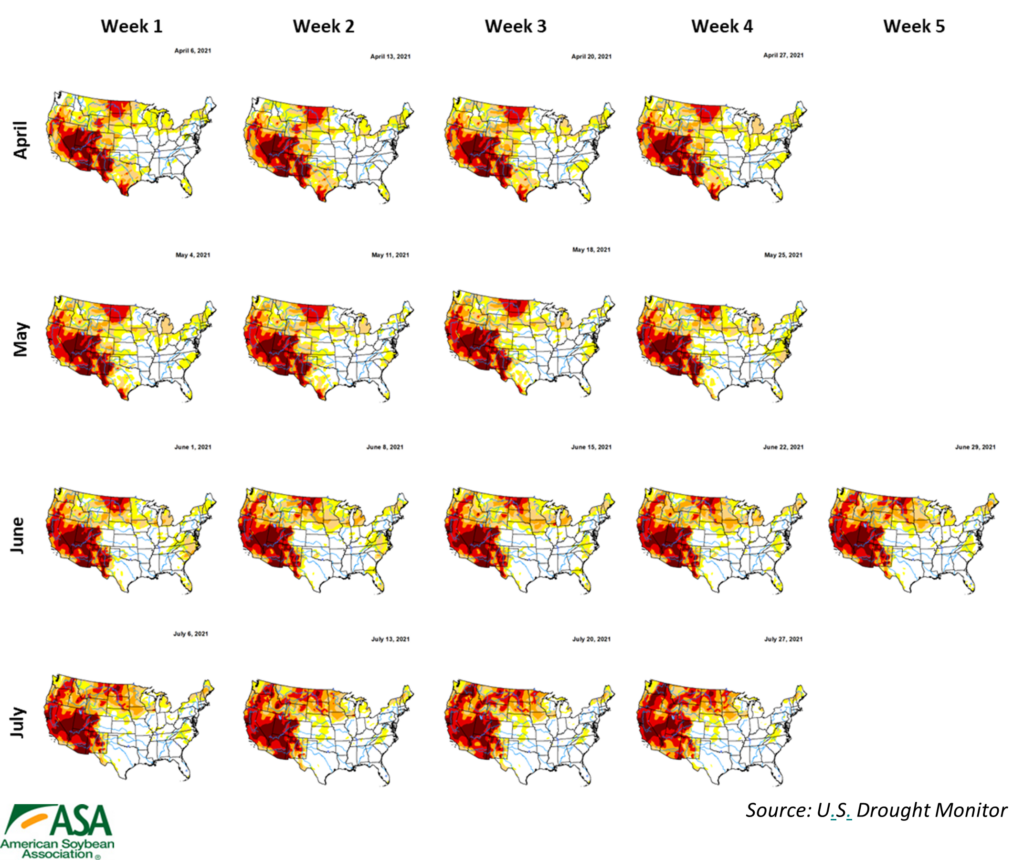 USDA reports crop conditions weekly through the growing season. These data are collected from surveys of those in occupations that allow them to visually survey the crop and have contact with farmers. The results are subjective in nature. For each state, the crop is broken out into five condition categories (very poor, poor, fair, good and excellent) by percentage. One common way to combine these five categories into a single metric is to report the share in the good and excellent categories. The downside of this is that it treats the categories as binary. For instance, “very poor” and “fair” have the same effect on the metric even though they are very different conditions. To overcome this problem, a metric is used here that accounts for the degree of the condition. “Very poor” is given a value of -2, “poor,” -1; “fair,” 0; “good,” 1; and “very good,” 2. Each state and the U.S. can be given an aggregate score by multiplying the value by the share in each. For instance, if 10% is very poor, 20% poor, 20% fair, 30% good and 20 excellent, the condition score would be .3. The condition score can range between -2 and 2.

Figure 2 shows the latest condition score by state, and the areas affected by drought become immediately obvious. North Dakota has the worst score at -.42, followed by South Dakota at -.05 and then Minnesota at .07. Despite experiencing some moderate drought, Nebraska has a score of .96. In general, states east of the Mississippi are tending to have better conditions this year. The USDA reports an aggregate condition for 18 states that represent 96% of the 2020 acres. The corresponding score for the aggregate is .57. 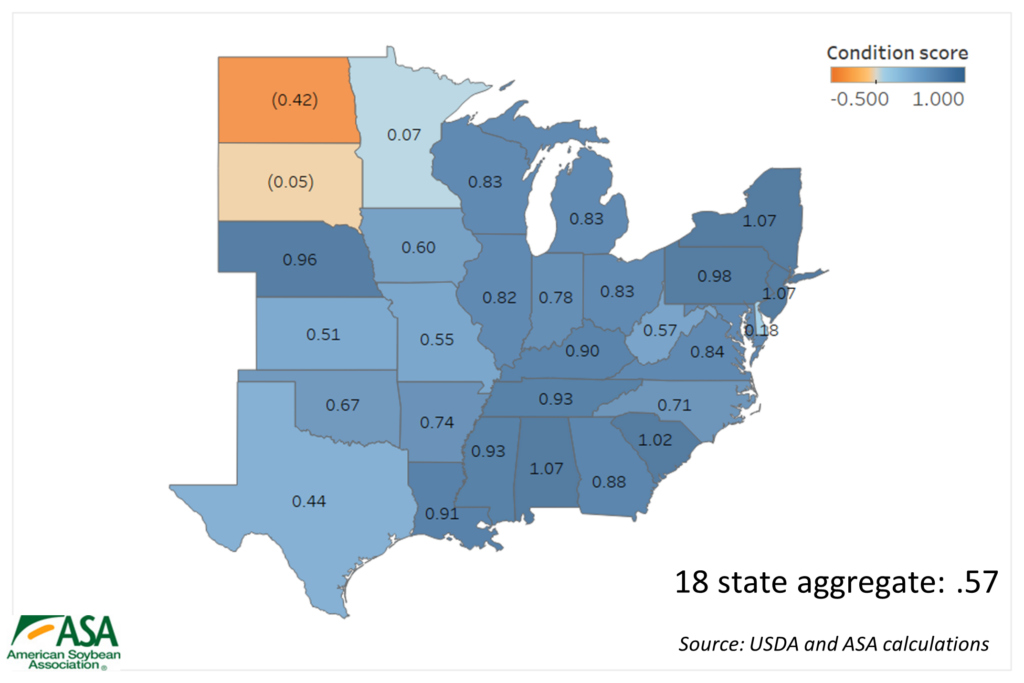 As mentioned, the conditions are updated weekly by USDA with the current set being week 30. After late September, approximately week 39, the conditions reporting historically starts tailing off. Comparing the current week’s conditions to those at the end of the growing season gives an expectation for how conditions could continue to develop. Figure 3 shows a histogram of the historical changes between the weeks. Each box represents a year where the change was in the range. For instance, since the first year in the graph, 1989, the condition score has increased by between 0 and .05 eleven times. In fact, 19 of the 32 years moved by less than .05 in either direction. While most of the condition changes at this point are small, there has historically been more potential for deteriorating conditions than improving conditions. The worst drop was in 2003 when soybean aphids caused major damage. The average change is a drop by .07 over the nine week period. 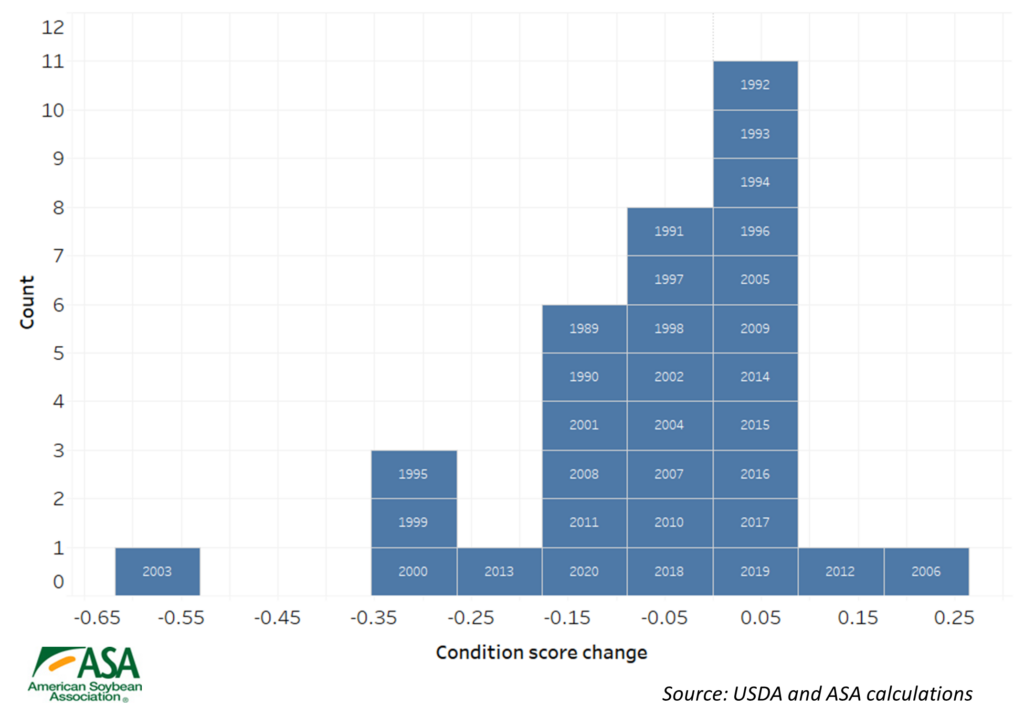 Figure 4 shows the historical relationship between the week 30, 18-state aggregate soybean condition score and the U.S. yield deviation from trend. The pattern follows the expected pattern that better crop conditions at this point correlate to a higher yield. The 2003 crop again sticks out, as its condition at week 30 was above average at .71 but deteriorated to .09 at the end of the season. The 2021 value of .57 corresponds to a wide range—from about 2 to -3 historically. 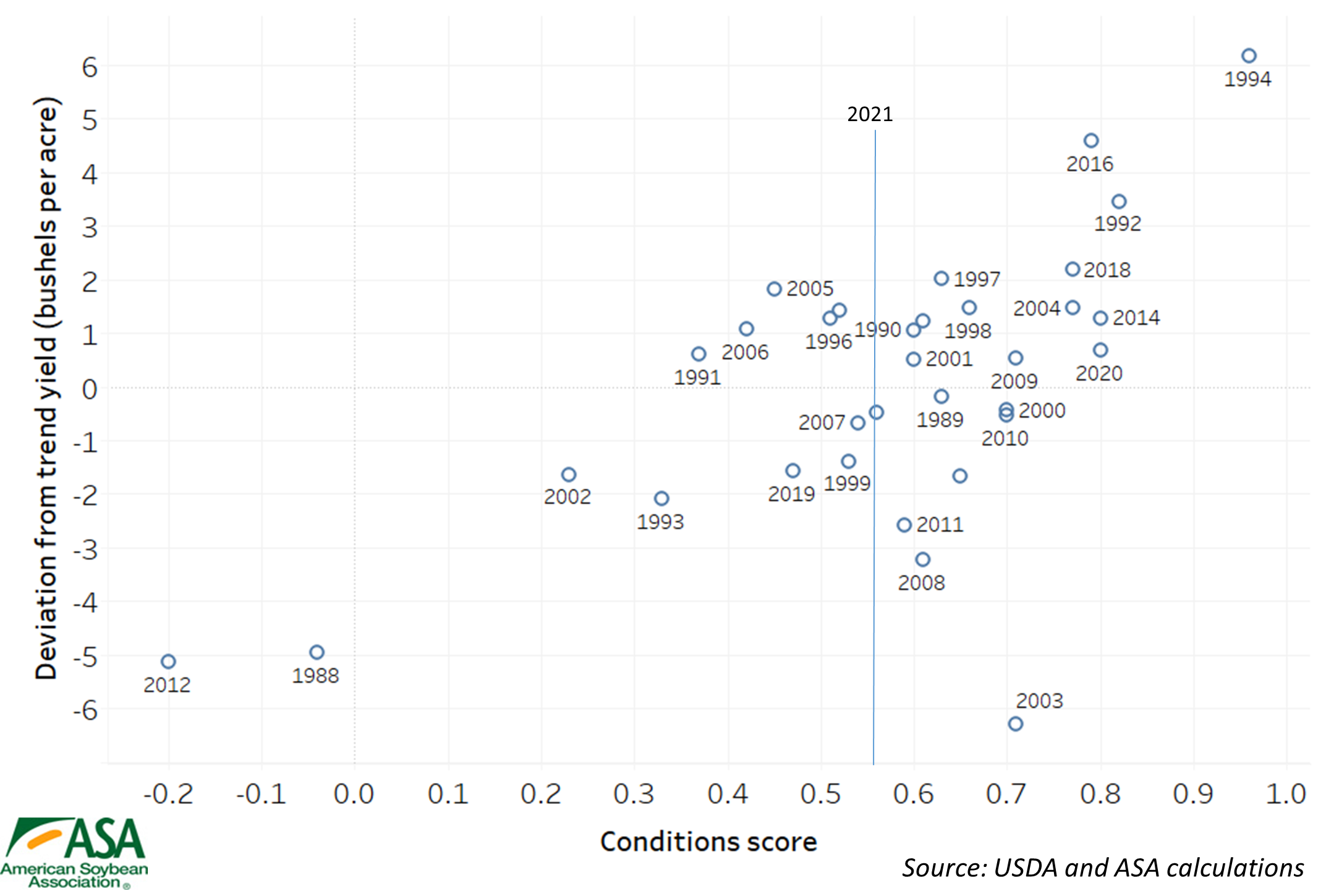 A more precise estimate can be established with a regression model. Using the conditions score, a linear trend and an adjustment for the 2013 national yield bump, the model predicts a 2021 soybean yield of 50.0 bushels per acre. This is also about where the trade is estimating the 2021 yield to be. While any exercise to forecast the final yield with limited information at this point is an exercise in humility, it does appear quite likely that the August production report that will be released next week should bring the USDA soybean yield estimate down.