Economist’s Angle: The June Acreage Report That Moved Too Little

The March prospective plantings report provided a surprise to the market with fewer soybean and corn acres than expected. After that surprise, all eyes turned to USDA’s first report for actual plantings, the June acreage report. The trade average expectations were 89.0 million acres of soybeans and 93.8 million acres of corn. Instead, the new report revealed soybeans almost unchanged from March intentions at 87.6 million acres and corn at 92.7 million acres. As a result, the November futures price for soybeans rose 86 cents on Wednesday.

While plantings did not meet industry expectations, overall area did increase from intentions by 1.1 million acres. Corn led the way in the acreage increase at 1.5 million acres, but reductions in several other crops including sorghum and cotton lowered the total effect. 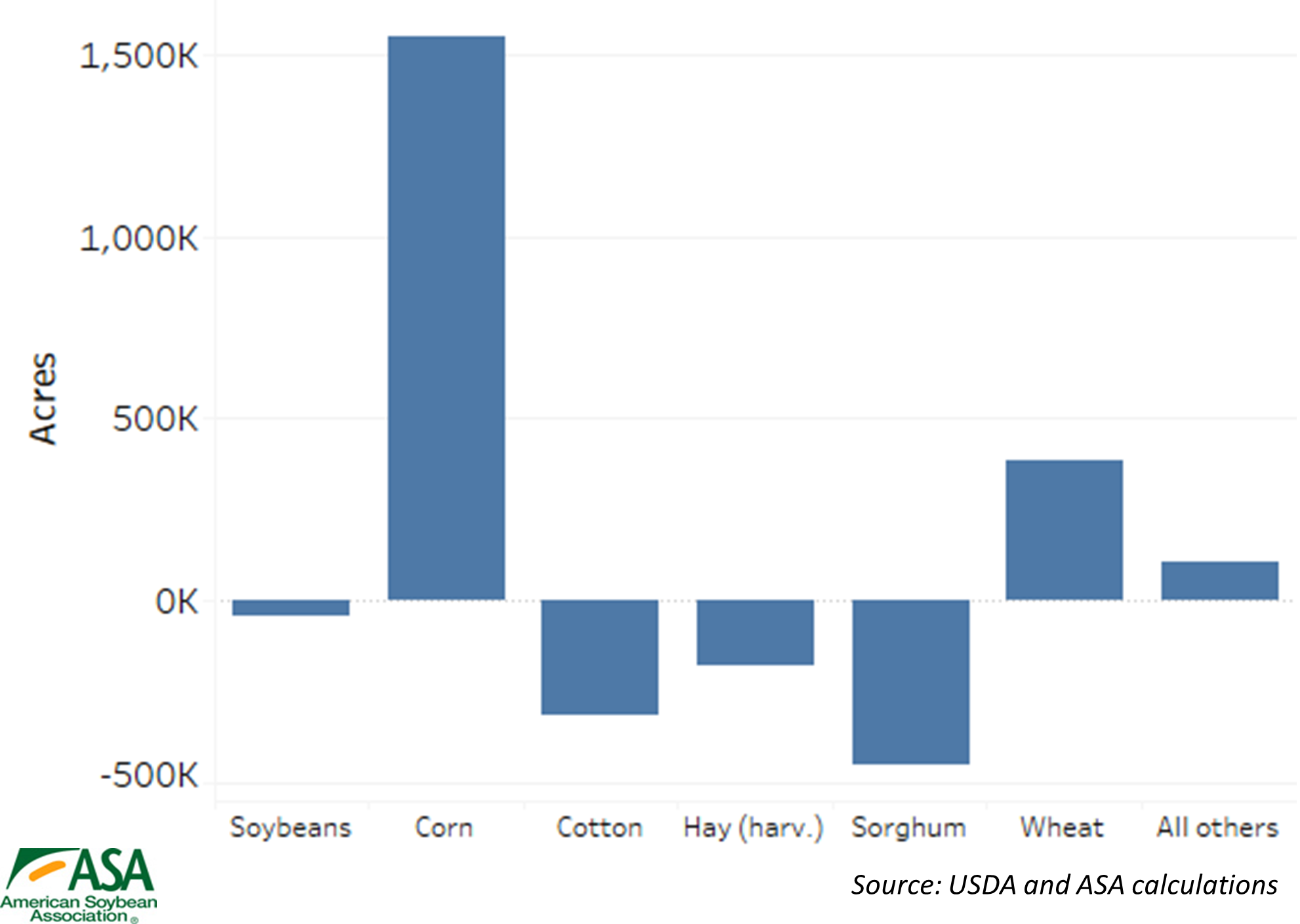 While there is surprise that the overall acreage pie did not grow more, the relationship between corn and soybean acreage changes following the March intentions tracked price patterns. For the intentions report, USDA surveyed producers in the first two weeks of March. Since that time, prices for soybeans and corn have increased (Figure 2), starting at the end of March when the report surprised the market. However, corn prices increased more than soybean prices through the planting season. The market bought more acres but was signaling that it wanted them in corn. 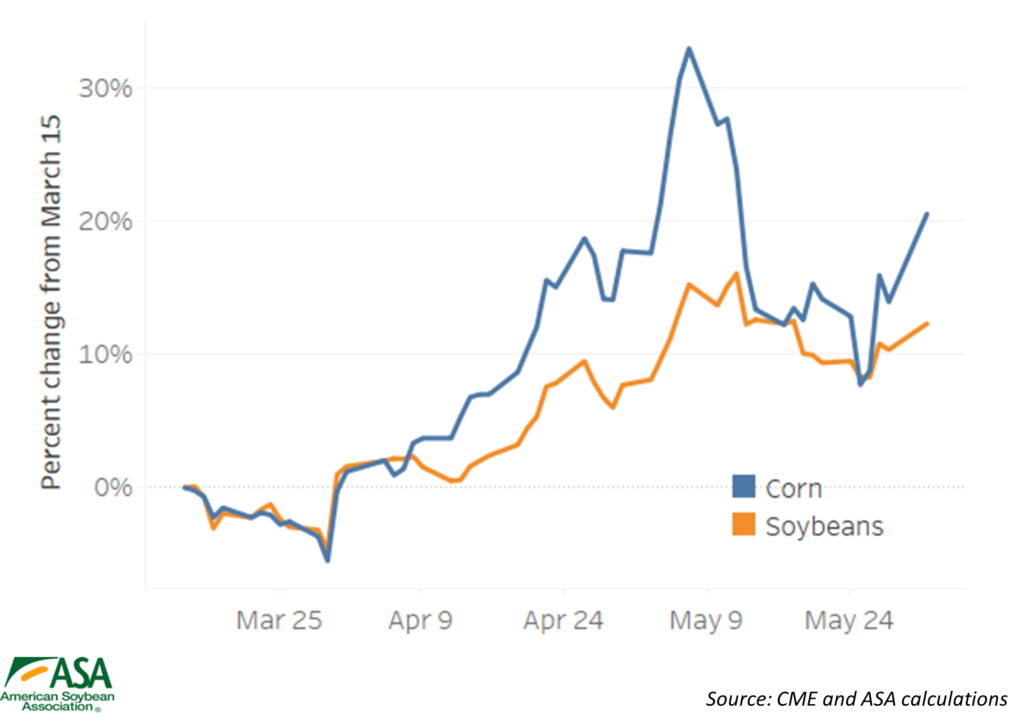 The changes between intentions and actual vary by state (Figure 3). The largest decrease in acres was South Dakota at 200,000, but this was offset by the largest increase in North Dakota at 200,000 acres. Kansas, Nebraska, Minnesota, Indiana and Ohio all had losses of 100,000 acres between the reports. Meanwhile, Iowa, Missouri and Arkansas all managed to plant an additional 100,000 of beans. Several states, including Illinois, Kentucky and Pennsylvania, experienced plantings that were unchanged from intentions. 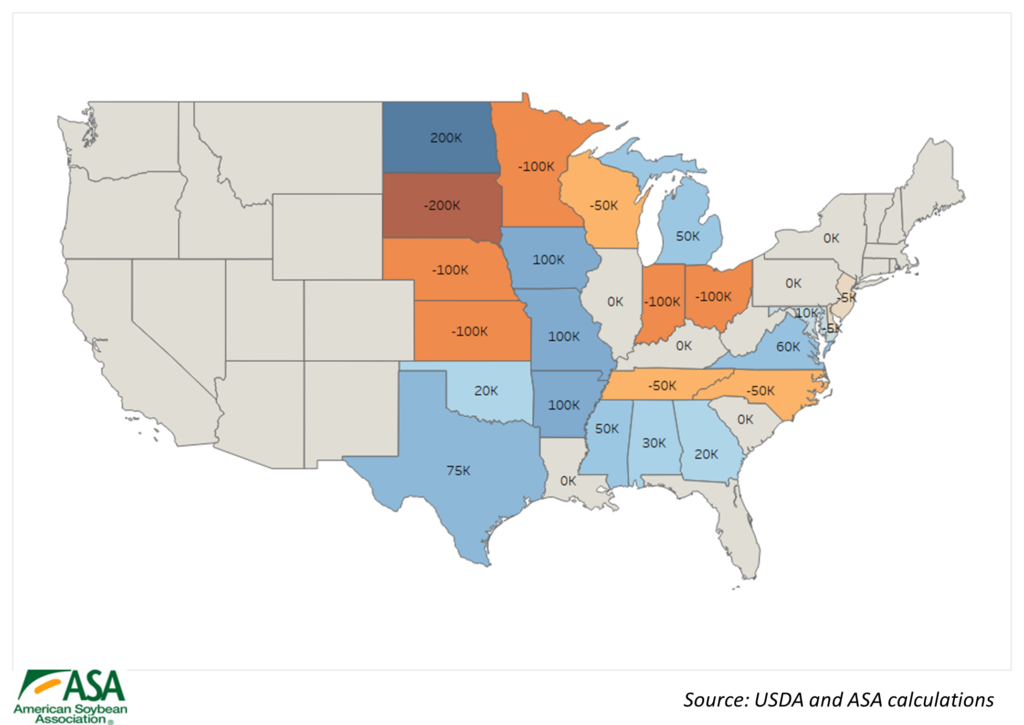 Illinois, Iowa and Minnesota continue to have the most soybean acres (Figure 4). North Dakota managed to increase acres from 5.75 million in 2020 to 7.2 million in 2021, which will be a record for the state. Similarly, Kentucky and North Carolina posted record soybean acres. Only Kansas is set to have fewer acres in 2021 than 2020. 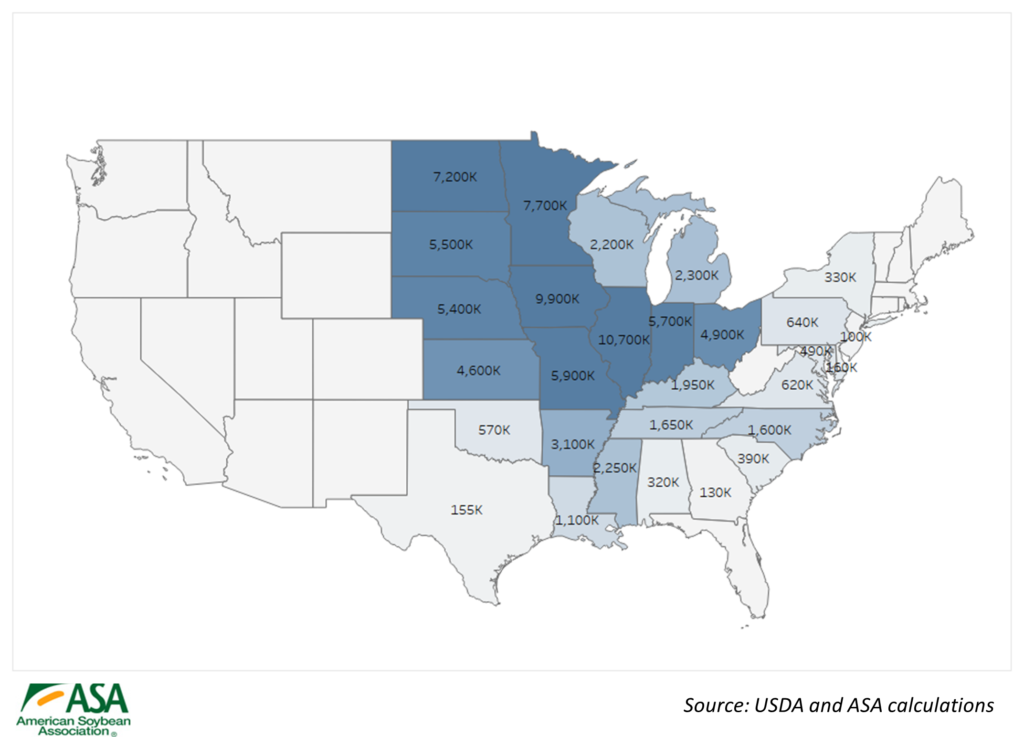 While North and South Dakota have increased their soybean area by a combined two million acres, the severe drought that has been affecting the Western portion of the country has been worsened in the growing region, with parts of North Dakota in the “exceptional drought” category. The results can be seen in the crop conditions for soybeans (Figure 5) with only 25% of the crop in North Dakota rated as “good” or “excellent” and only 26% in South Dakota. Drought conditions are also being experienced in Minnesota, Iowa, Wisconsin and Michigan. Minnesota has 45% of its soy crop in “good” or “excellent” condition. Generally, the further southeast in the country, the better the conditions. Nationally, 60% is “good” or “excellent” and 9% is “poor” or “very poor.” 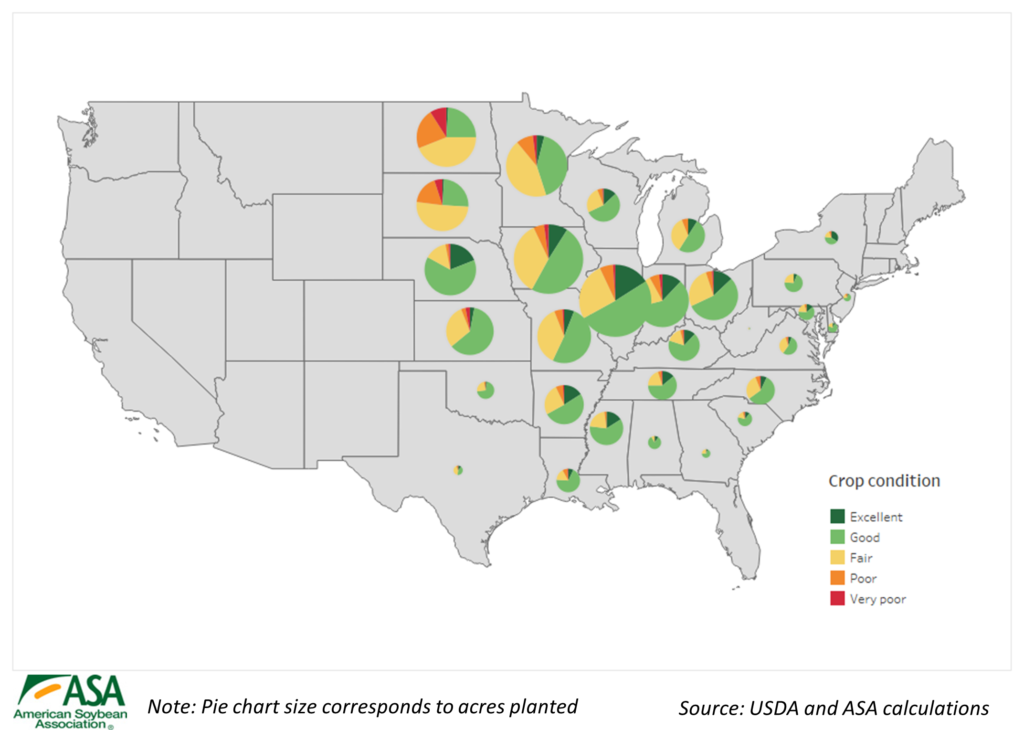 While yields are a concern, the actual plantings are also not settled at this point and will be revised throughout the year. USDA will conduct another acreage survey in December in addition to collecting satellite data and observing crop insurance and FSA data. In the past 20 years, USDA’s June soybean acreage numbers have been above the final numbers 13 times and below seven. The average difference between the June acreage report and the final number is about 1 million acres, although last year’s June number for soybeans ended up being 3.9 million acres too high.

The USDA’s World Outlook Board projects the second lowest stocks-to-use ratio for U.S. soybeans in history for the 2020 marketing year. While stock patterns have changed with the rise of South American production, this still impacts markets. With strong expected demand for U.S. soybeans both domestically and abroad, the lack of current acres will continue to support soybean prices. However, changing growing conditions and acreage revisions will likely continue to make the price ride bumpy.