The first title of the farm bill provides programs to serve as a safety net for farmers. Agricultural producers can face large annual fluctuations in income due to uncontrollable and unpredictable circumstances. The farm bill programs are largely designed to provide support during adverse years, so producers can financially survive those periods; however, due to farm prices rising more quickly than program provisions, the safety net has been shrinking over the long-term.

The current suite of farm bill programs can trace its origin to the 2002 farm bill. Since that time, there have been multiple types of programs intended to address different risks. The programs outlined below are calculated for individual crops and not the farm level. While other programs have existed, including at the farm level, the outlined programs have provided most of the safety net for row crops under Title I.

Farm safety net spending has consistently trended downward since the enactment of the 2002 farm bill. Figure 1 shows the historical outlays by marketing year for these crops. Outlays totaled almost $15 billion for the 2004/05 crops. In contrast, the most recent year of data (2020/21) experienced just over $2 billion in outlays. Since at least some of the farm bill programs are tied to outcomes, there will always be variability in outlays, and that variability likely increased with the elimination of direct payments in 2014. This removed fixed payments for most crops from the safety net and provided benefits based on outcomes, which can make it more difficult to identify trends in payments. The budget scorekeeper, the Congressional Budget Office, estimated that the 2014 farm bill would decrease Title I programs more than $14 billion over a 10-year period [3]. As such, even with increased volatility in benefits, the expectation was for lower levels. 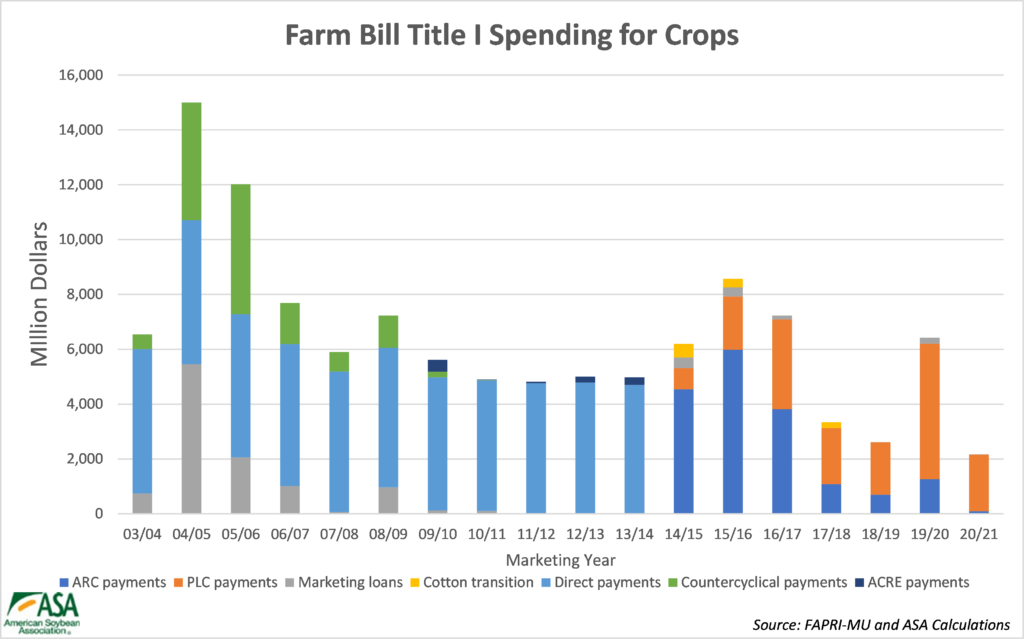 However, budget cuts aren’t the only reason that farm bill safety net spending has been decreasing. A major factor is the way that the programs and the budget scoring rules interact. According to congressional rules, the farm bills must generally not increase the deficit. If CBO determines that a new or revised program would cost more, the cost will have to be offset from elsewhere. Many of the farm bill programs have been tied to support price levels established in legislation, such as CCP, PLC and marketing loans. CBO assumes that these programs continue in its baseline which is used as the starting point for budgetary scoring. Raising the statutory support prices will always cost more. Therefore, it is very difficult to do so. Soybean target/reference prices used in CCP and PLC payments have only increased twice, in 2010/11 and 2014/15. For corn, the only increases were in 2004/05 and 2014/15. In general, reference prices for crops were increased in the 2014 farm bill, and this was largely funded by eliminating direct payments.

Despite few changes in the target and reference prices, crop prices and input prices have risen significantly (Figure 2). While the farm bills establish statutory reference prices, subsequent program formulas contain calculations that establish an effective reference price that can be different. Soybean prices have increased by over 90% between 2003/04, and the projections for the 2022/23 marketing year, while the effective/target reference price has increased by less than 60%. The crop price increases are usually followed by cost increases. For example, USDA’s crop price index has risen 94% between 2003 and 2021, the last year of data. Simply put, the safety net levels have not kept up with rising costs. 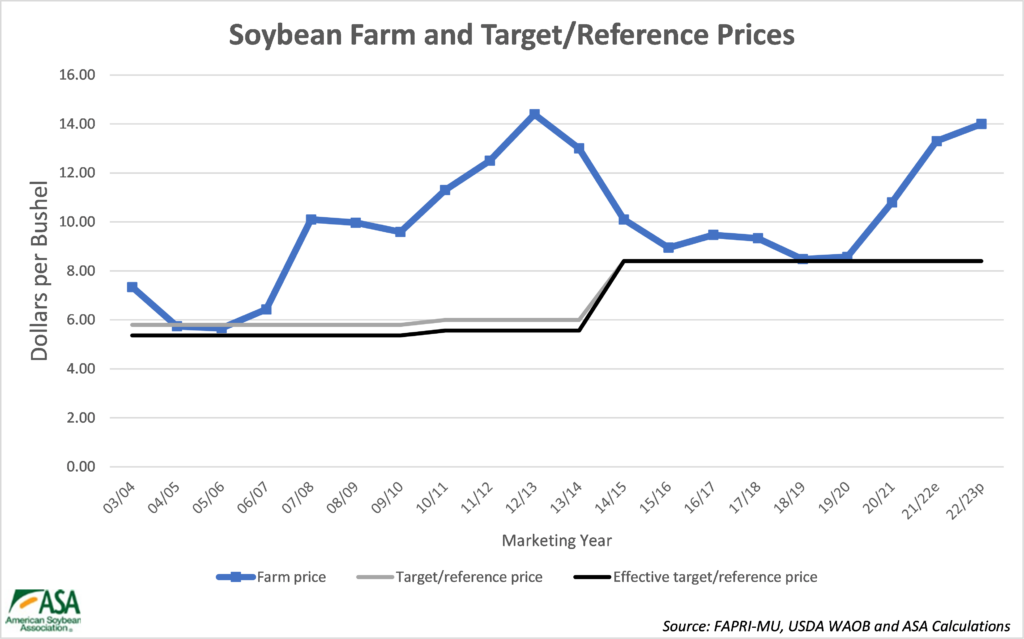 The increasing variable costs and farm prices have outpaced the growth in the farm bill safety net. Farmers have less assistance in times of need. If demand growth keeps exceeding yield growth over the long run, the safety net will continue to diminish, while the baseline scoring of the programs will continue to shrink.

The effects of the diminishing farm bill safety net have been recently experienced. During the recent trade war in 2018 and 2019, crop prices took a major hit. U.S. soybeans lost almost 1/3 of their demand within a very short period of time, but soybeans failed to trigger PLC payments. USDA’s Economic Research Service estimated that $27 billion in ag exports was lost in 2018 and 2019 [4], yet Title I crop programs only provided about $9 billion those two years. Ad hoc programs were implemented to address the shortfall. In fact, between 2018 and 2021 ad hoc programs accounted for just over 70% of direct farm payments.

[1] The Olympic average removes the highest and lowest observations and averages the rest. This limits the effect of an extreme observation. [2] There is an ARC program that operates at the individual/farm level, but it has limited participation.  [3] https://www.cbo.gov/sites/default/files/113th-congress-2013-2014/costestimate/hr2642lucasltr00.pdf [4] https://www.ers.usda.gov/webdocs/publications/102980/err-304_summary.pdf?v=5253.4