Soybeans are the United States’ top agricultural export with over $27 billion in exports in 2021. About half of the soybean crop is exported as whole soybeans. Trade is a critical driver of value in soybean markets and translates directly into farmers’ bottom lines. The impacts of this could be seen during the trade war when the value of soybean exports barely topped $17 billion dollars during 2018 and net farm income before federal farm payments was just 59% of its 2021 value. The ability to export and sustain market-based value to farms is dependent upon a reliable and inexpensive transportation system. That transportation system, through low Mississippi River levels and a potential rail strike, is currently exporting soybeans at a slower pace and higher costs, which reduces the soybean (and other crop) prices that farmers receive.

Soybeans rely on a multimodal network when being transported to market, with the sequence of methods largely being determined by the final destination. Soybeans that remain domestically are often crushed. In this case, trucks deliver the bulk of the crop (86%) while rail delivers 12% and barge only 2%. The relatively short distances between the farm and the crush facilities often preclude the ability to utilize cheaper rail and barge. On the other hand, exports overwhelmingly rely on barge and rail. Since soybeans are primarily produced in the central U.S., they must often be moved long distances to reach port facilities when exported. Soybeans produced in the Corn Belt overwhelmingly travel by barge down the Mississippi River to the Gulf when exported. Soybeans produced in the Northern Plains are moved by rail to ports in the Pacific Northwest. As a result, 62% of the soybean transportation is via barge and 29% via rail when exported. Trucking only represents 9% in this case. 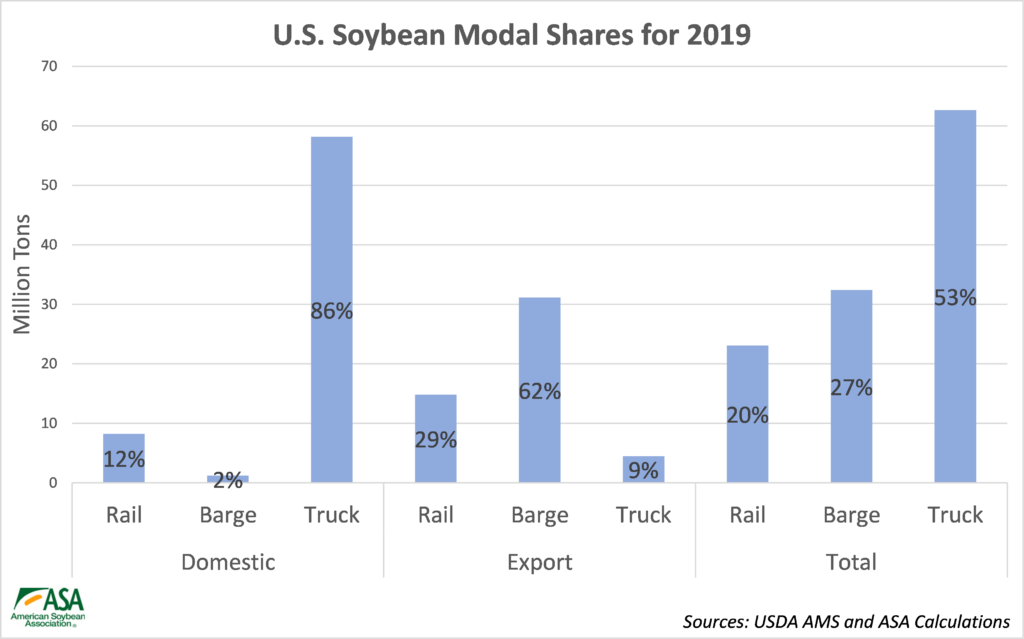 Barge movement of soybeans on the Mississippi River is seasonal (Figure 2). Typically, the months immediately following the harvest starting in September experience the highest volumes of transport. The lowest time of year is usually in the spring as the South American crop hits the world markets. Soybean barge movement on the Mississippi River has struggled to reach the typical levels at this time due to drought-induced low flows. In fact, low-water records have been set this year for many parts of the river. This has resulted in fewer barges per tow and lighter barge loading to enable the barge traffic to be able to still navigate the low river. 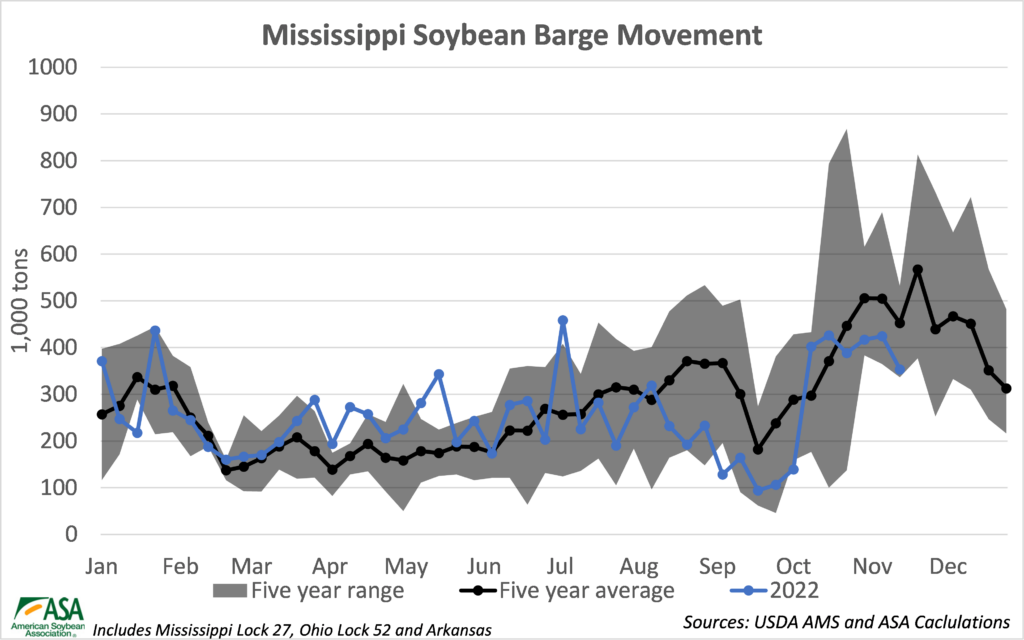 Reducing the amount of soybeans (and other crops) that can be hauled in a barge tow increases the cost of transport and subsequent barge rates. For instance, it typically costs $10 to $20 per ton to haul soybeans from St. Louis to New Orleans via barge. Those prices exceeded $30 per ton late last year into early 2022 due to Hurricane Ida. The storm temporarily shut down some unloading facilities and damaged many barges. The rates had recovered from the inflation caused by the hurricane. However, the current drought shot prices well over $100 per ton this year. The rates have fortunately been falling, but the current $40 per ton still exceeds the high levels experienced after Hurricane Ida. 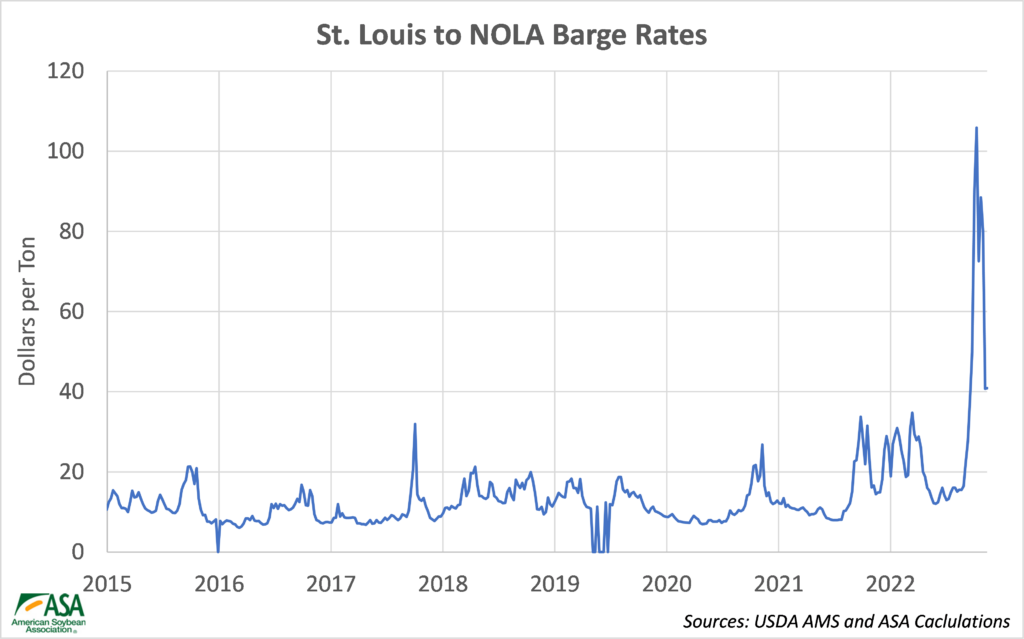 Fortunately, rail car deliveries during October to the Gulf spiked to help offset the reduced barge traffic. (Table 1). The average weekly delivery rate for October 2022 was over double the 2021 rate. However, one fully loaded barge can carry the equivalent of 14 to 17 rail cars. For instance, it would take almost 1,000 rail cars to make up the Gulf barge shortfall from average for the last reported week. While rail shipments have increased to the Gulf, the same generally hasn’t been true to other ports. Rail is critical to delivery of soy to the Pacific Northwest. However, the weekly rate is down from both 2020 and 2021. Other ports, such as Texas Gulf have been down sharply for October 2022.

Like barge rates, rail delivery costs have also been on the rise. For example, the Fargo, North Dakota, to Tacoma, Washington, tariff and fuel surcharge for soybeans increased from about $1.55 per bushel at the beginning of 2021 to about $1.87 currently. The cheapest form of delivery between two points determines basis. This results in farmers potentially receiving about $.32 less per bushel compared to the PNW port price than last year. Similarly, the rail cost between Council Bluffs, Iowa, to New Orleans, Louisiana, has increased from about $1.34 per bushel beginning of 2021 to about $1.56 currently. A barge rate of $20 from St. Louis to New Orleans translates to $.60 per bushel. Normally, barge is much cheaper than rail. The $40 rate increases the transportation cost per bushel to $1.20 per bushel, which is approaching the price of rail. Barge rates were temporarily above rail rates, but the situation has been reaching an equilibrium as the prices are converging. This is to be expected, as are increasing rail costs along the route due to higher demand for the service. 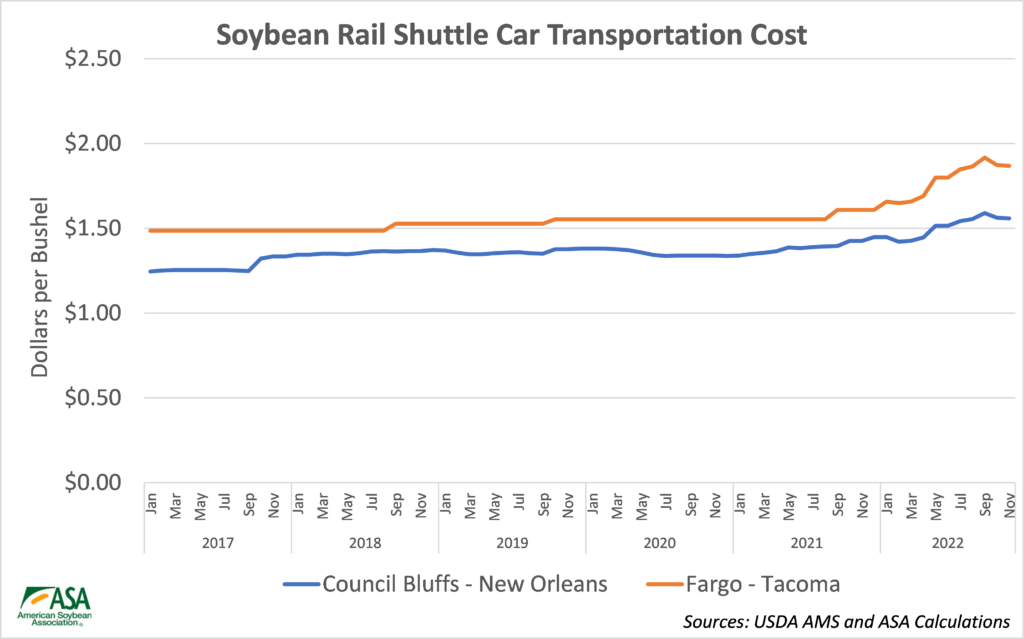 Increasing delivery costs increase the spread, or basis, between locations. The basis between NOLA and Iowa[1] increased by almost $3 per bushel and is currently just under $2 (Figure 4). For comparison, the usual basis is about $1 per bushel between these two locations. As prices diverge between locations, arbitrage lets traders buy where it is cheaper and sell where it is more expensive. This forces the price differential to the cost of transporting the crop. As long as transportation costs remain high, farmers in the growing region will receive less for their crop than is typical. 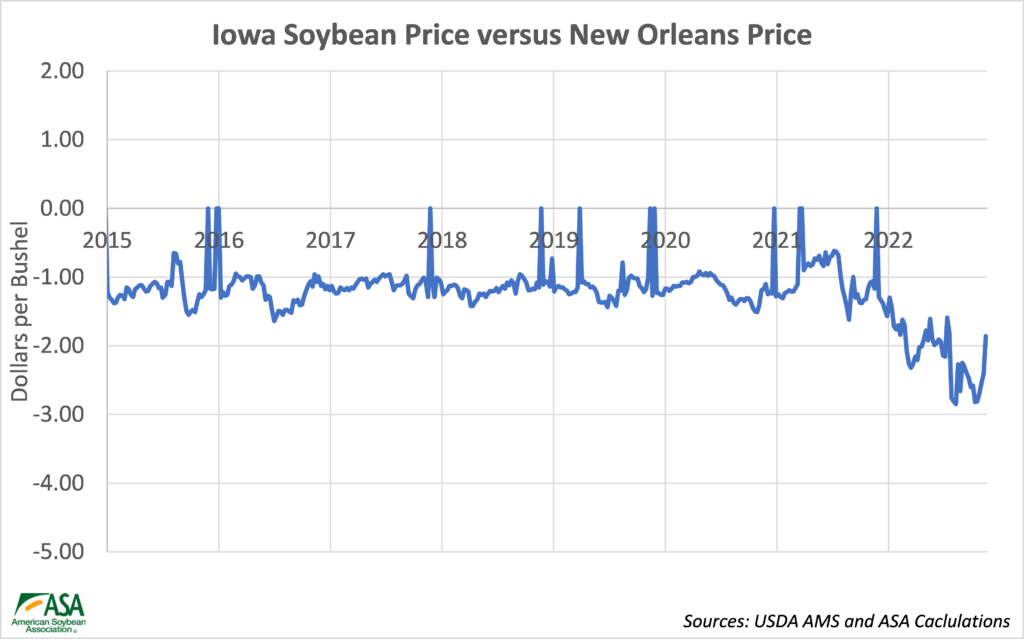 [1] The basis is dependent upon the exact location. Typically, basis is stronger (less negative) along the Mississippi River in Iowa, but that hasn’t always been true this year as the market is incentivizing soy movement away from the river.

While the soy transportation system has bent, it hasn’t broken. However, it is dependent upon the full range of options to continue exports. As primary modes are saturated, the secondary options include a higher cost and therefore lower prices for farmers. However, this is still preferable to an inability to move grain, which would crash farm prices. It is critical that all options remain on the table. A rail strike that prevented rail transit would be devastating to soybean prices, as rail is helping absorb some of the river issues. The Mississippi River simply cannot make up for a rail strike. Four of the 12 railroad unions have rejected a labor agreement with the railroads. This sets up the possibility of strikes starting December 9, and the effect on soybean prices would be devastating. Simply making up the lost transportation at a later date is not a satisfactory option, as the U.S. would be past its primary export window. It is critical that all options continue to remain on the table during this period when multiple transportation issues are hitting.