Last week, USDA released its Prospective Plantings report, which contained more soybean acres than expected. The average trade expectation for the report was 88.7 million acres of soybeans, but the report surprised markets with 91.0 million acres—a record for soybean area if realized. The potential year-over-year increase in soy area would be almost fully offset by a decrease in corn area. USDA arrived at the numbers by surveying 73,000 farm operators the first two weeks of March about their planting intentions for spring. Despite strong prices for both soybeans and corn, it appears the relatively higher costs for corn are driving the marginal planting decisions.

USDA reports results for 29 soybean states. Of those, only five indicated less area to be planted to soy in 2022 (Figure 1), and four of those states intend to decrease area by 30,000 acres or less. The net result would be a 3.8 million increase in U.S. soybean acres from last year. Simultaneously, the intentions indicate 3.9 million fewer acres of corn this year, which would almost perfectly offset the increase in soy. This would be the second time soybeans were the largest crop by area and the third time soy area was greater than corn. The total area planted to principal crops is intended to be mostly unchanged, with just over a 200,000-acre increase. 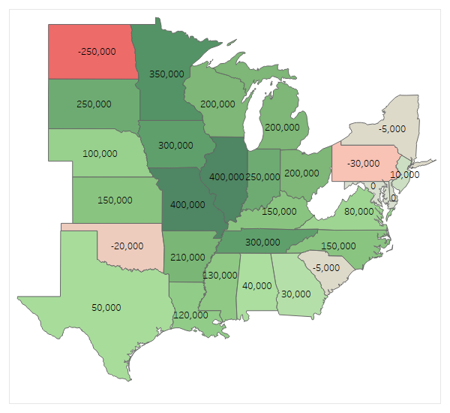 The Prospective Plantings report has historically been consistent with final plantings (Figure 2). The USDA survey has generally matched the trends within soybean area. A notable year was 2007, as both intentions and actual acres dropped sharply. This drop was driven by better returns to corn than beans that year. The other notable year was 2019, where plantings also dipped but the intentions failed to predict the change. Weather became a major issue that year and prevented plantings were high. Since producers did not foresee the issue when filling out the survey in early March, the disparity was quite large that year. 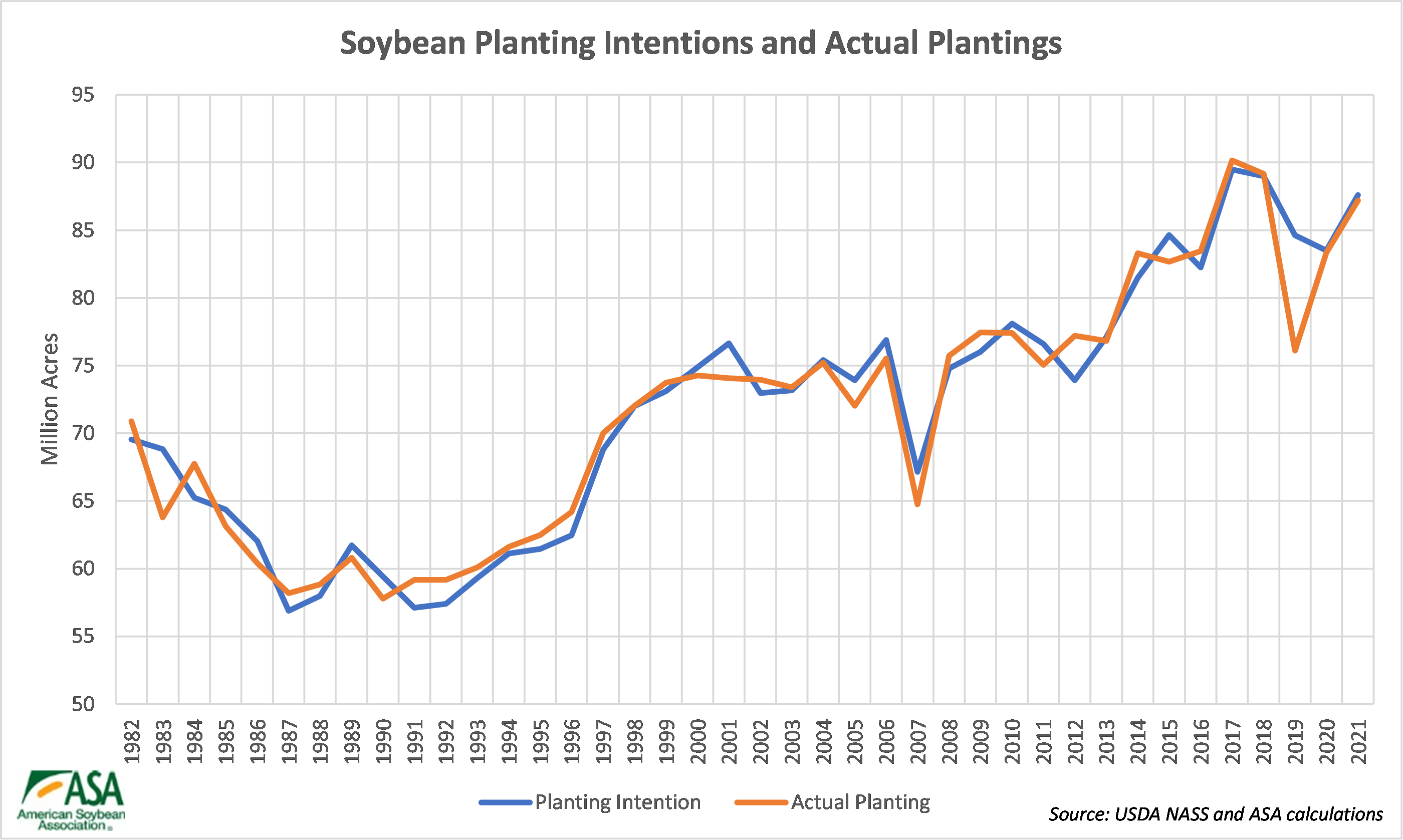 The errors (intentions minus actual) through time have generally been small for the prospective plantings report (Figure 3). Since 1982, over 70% of the soybean intentions have been within 1 million acres of the actual plantings. The average error over that period was 165,000 acres. This small number is not entirely by accident since USDA adjusts the survey results to correct for historical errors. The errors are fairly evenly split between positive and negative, but the largest errors have been positive. Both 1983 and 2019 had wet springs during planting, which caused the large positive error. Given that there is a limit to how many more acres can be planted, it is unsurprising that the largest errors are positive. 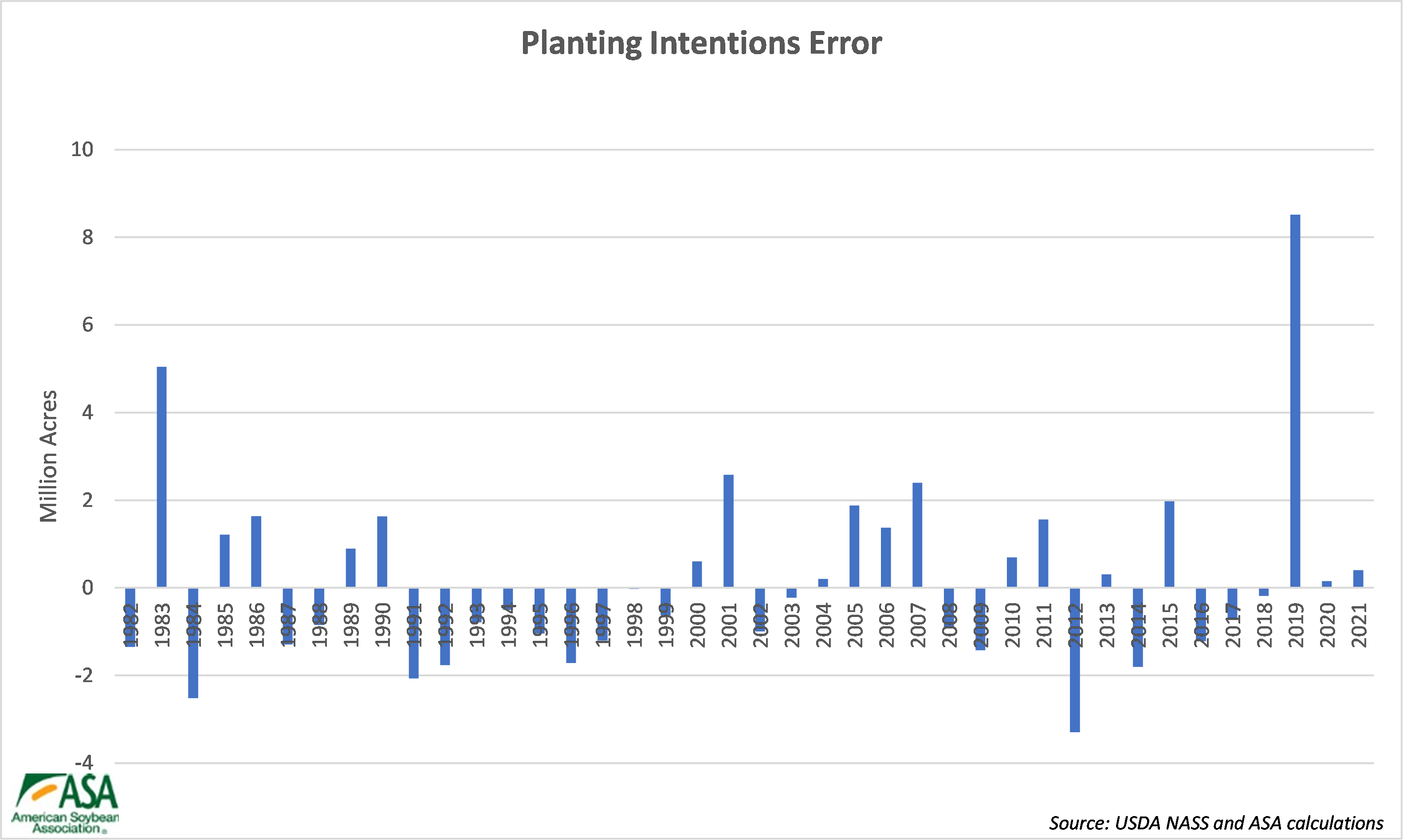 Soybean and corn prices and planting intentions have had a fairly consistent relationship. Under current crop insurance provisions, the projected price is determined using the average futures price of a harvest contract (November for soybeans, December for corn) during February for most of the growing region. This projected price is used to determine the guarantee for crop insurance. As a result, the projected price is not only indicative of the price that farmers are facing for the upcoming crop while filling out the Prospective Plantings survey, but also it also helps set their guarantee. It, therefore, provides a useful benchmark of the market situation and price expectations for the upcoming crops.

Figure 4 plots the ratio of soybean divided by corn prospective plantings results against the soybean divided by corn crop insurance projected prices. The results tend to follow a linear trendline, indicating a relationship between soybean and corn prices and relative area. In other words, as soybean prices increase relative to corn, soybean acreage relative to corn tends to increase. Anything above 1.0 on the y-axis indicates soybean intentions surpassed corn intentions. This has occurred twice since 2011.

The dotted line in the chart represents a linear trendline. The dot for 2022 is the furthest from the line, indicating that relative prices in 2022 have the worst explanatory power for relative area since 2011. The corn prices relative to soy would typically have kept more acres in corn. However, the high input costs this year changed the normal relationship. 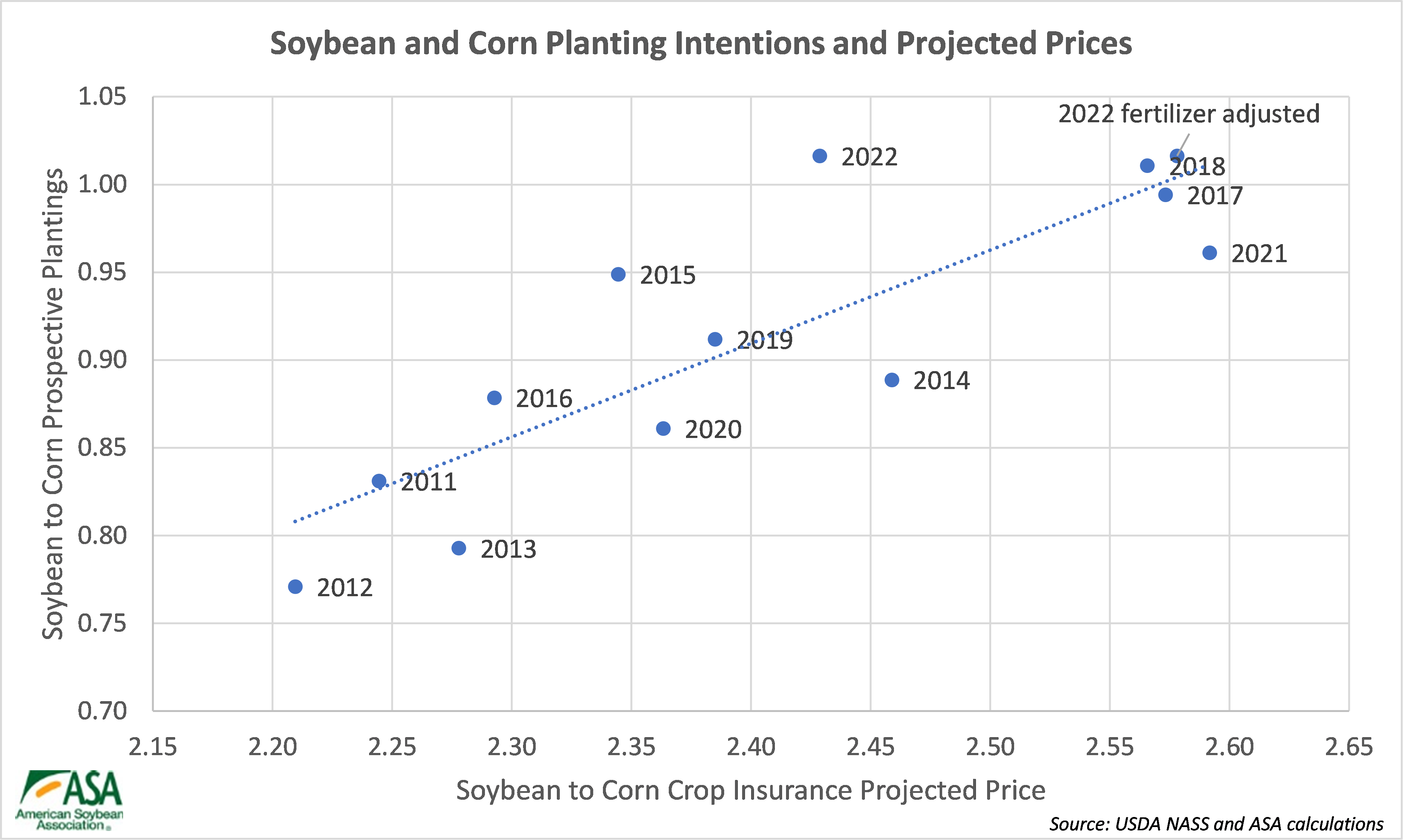 Fertilizer needs for corn are much greater than for soy. Analysis for Central Illinois shows 453 material pounds for corn versus 215 pounds for soybeans of fertilizer per acre. Consequently, with the large runup in fertilizer prices, this has led to a larger cost increase in corn. Using these rates and Illinois fertilizer prices reported by USDA Agricultural Marketing Service for early March, soybean fertilizer costs per acre increased from $56 to $91 in the past year, while corn fertilizer costs increased from $131 per acre to $255. Using the assumed yields for Central Illinois, the increase in costs was converted to a per-bushel basis and subtracted from the soybean and corn prices to create a 2022 fertilizer adjusted price ratio. That figure better captures some of the underlying factors in the market. As can be seen in Figure 4, this ratio lies along the trend line, indicating that once the run-up in fertilizer prices is accounted for, the 2022 soybean and corn relative plantings are in line with the historical relationship.

Surprisingly, using the Central Illinois yields and projected prices, the change from 2021 to 2022 corn returns is better than the change is for soybeans. In other words, the actual returns would seem to indicate that more corn should have been planted. Why didn’t that happen? A couple of factors could explain. The first is that there have been reports of spot fertilizer unavailability for certain products. At times, farmers might not be able to get or at least lock in prices for the fertilizer they want. Soybeans’ simpler fertilizer needs could help mitigate this issue. Second, a higher input crop is riskier to grow in times of high volatility. Farmers incur input costs in the spring and must wait until the fall to realize revenues. While high crop prices currently could favor corn, prices could fall before harvest or the crop could come up short, leaving producers stuck with high expenses without the revenue. Even though crop insurance is providing a high projected price, farmers must experience a loss before indemnities are triggered. As a result, soybeans provide a safer option in the current environment. If the weather and market conditions hold, it will likely be input costs that propel soybeans to achieve a new record for area in the United States.