Fertilizer prices have been on a nearly vertical climb the past year with some types almost doubling over the period. Factors on both the supply and demand sides of the fertilizer markets have converged to push up prices. All three primary nutrients, nitrogen (N), phosphorus (P) and potassium (K), have experienced the change but to slightly different degrees.

Monoammonium phosphate (MAP) is a common source of phosphorus and some nitrogen that, along with diammonium phosphate (DAP), provides a key source of nutrients for soybeans. DAP cash prices have reached the high levels that were experienced 10 years ago (Figure 1). Similarly, the price of potassium-providing potash, has doubled and has also reached the levels from 2011. Anhydrous ammonia is a source of nitrogen that is used to make many other nitrogen fertilizers. While prices for it have not reached the 2012/2013 levels, it is up over $300 per ton in the past year. 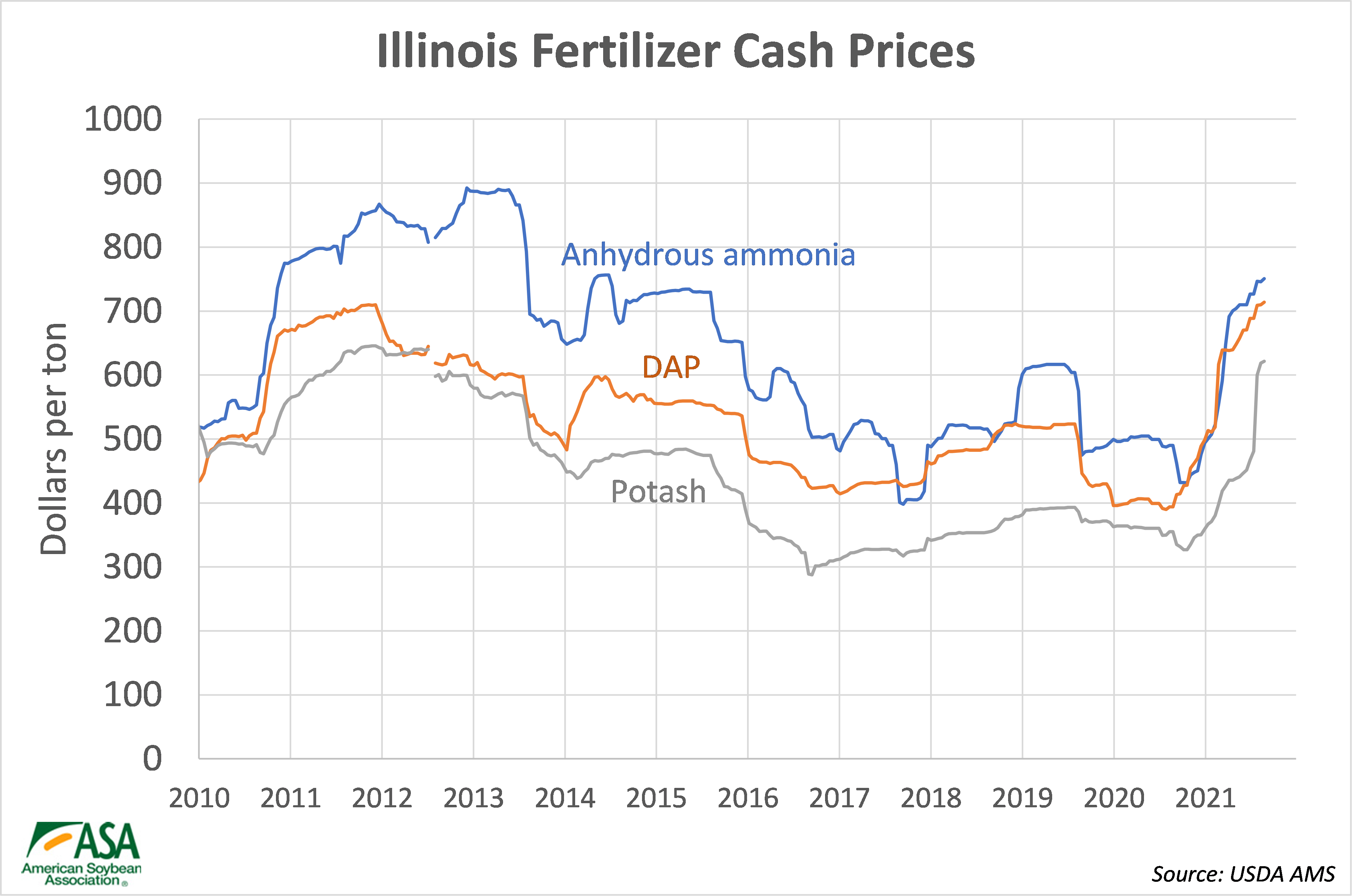 One of the factors pushing up the cost of fertilizer as an input has been increased demand. The 2019 and 2020 crops experienced significant number of acres that were unable to be planted, over 19.6 million and 10.2 million, respectively, compared to 1.9 million in 2018. Improved planting conditions in 2021 allowed total plantings in the U.S. to return to more normal levels (Figure 2), although it remains below those between 2012 to 2018. 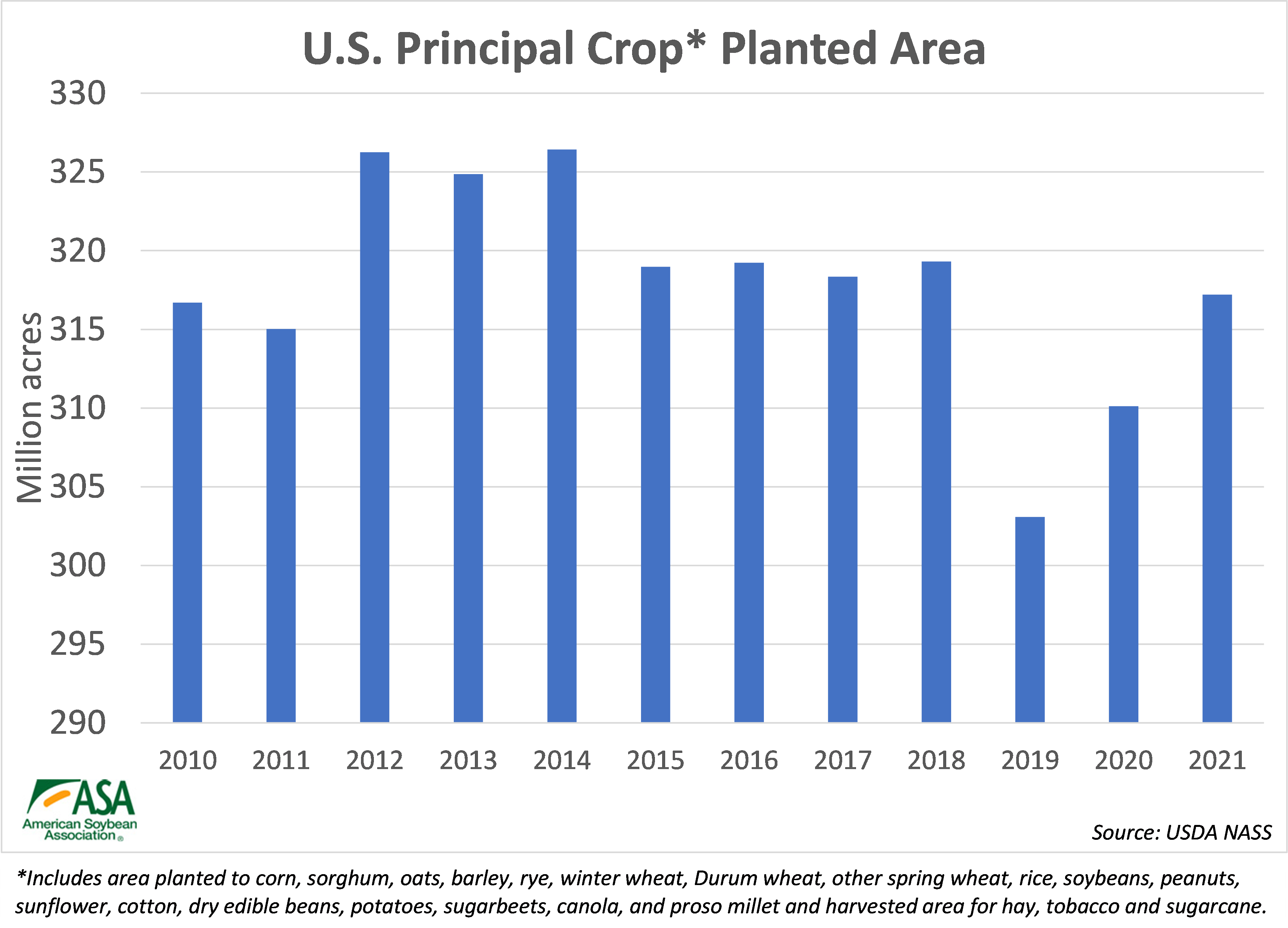 Planting conditions are not the only factor affecting fertilizer prices. The latter have typically tracked closely with crop prices, which have increased the past year. Figure 3 shows indices for the DAP price, along with corn and soybean prices, which are the two biggest users of phosphorus in the U.S. according to USDA data. Higher prices encourage more planted area but can also change the optimal rate of fertilizer application. This extra demand for fertilizer pulls up fertilizer prices. High crop prices in the 2011 through 2013 period tracked closely with high DAP prices, and the same phenomenon is once again occurring. 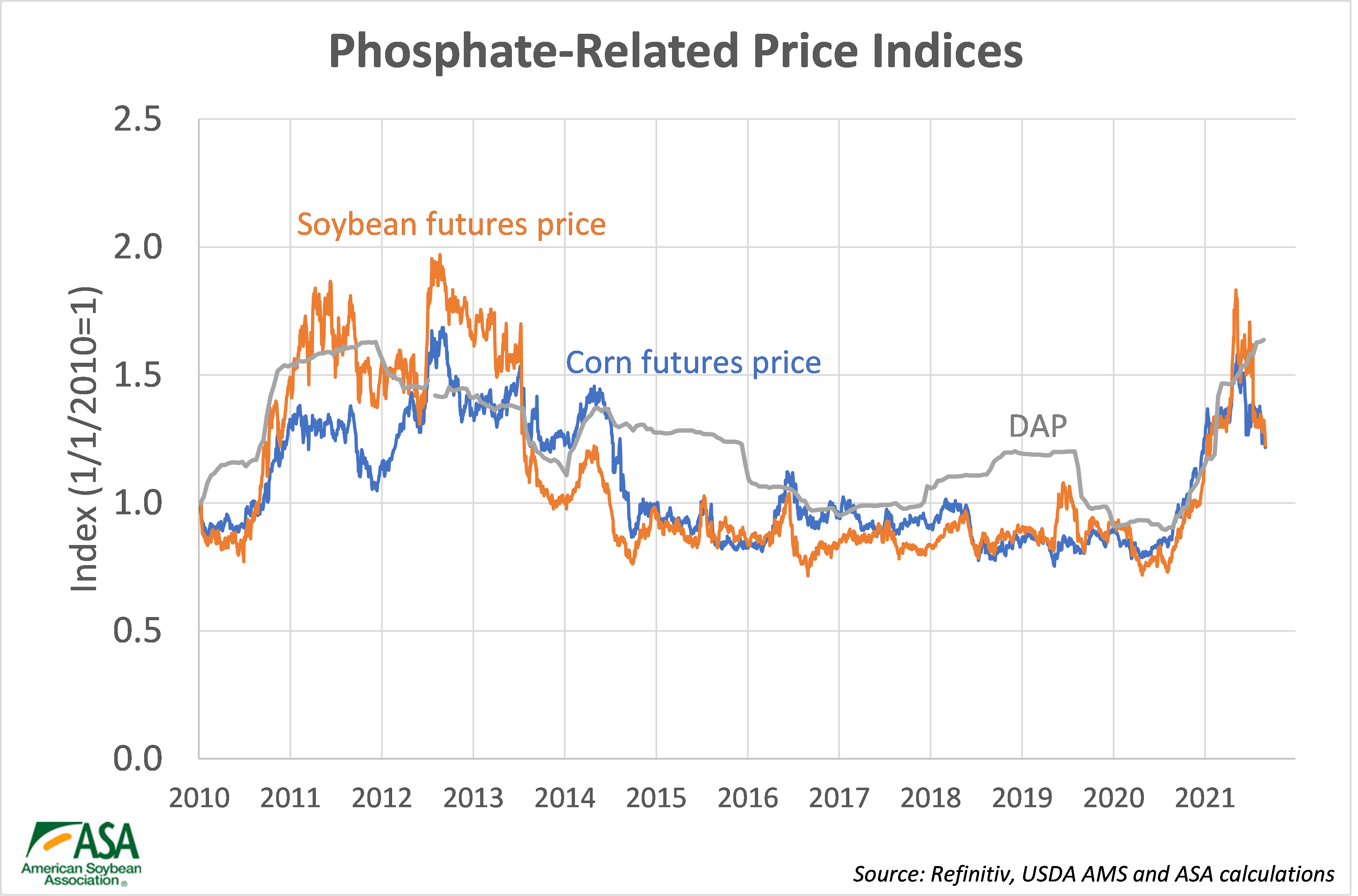 Likewise, nitrogen prices have increased. Straight nitrogen is rarely applied to soybeans but is applied to corn in a corn-soybean rotation. As can be seen in Figure 4, nitrogen prices tend to track closely with the corn price as well for the same reasons as DAP. Nitrogen fertilizer is generally produced by using natural gas and nitrogen from the air with the former representing most of the production cost. However, nitrogen fertilizer prices have not tracked closely with the natural gas prices. Cold weather conditions early in 2021 made natural gas unavailable for some fertilizer plants, which decreased supplies. 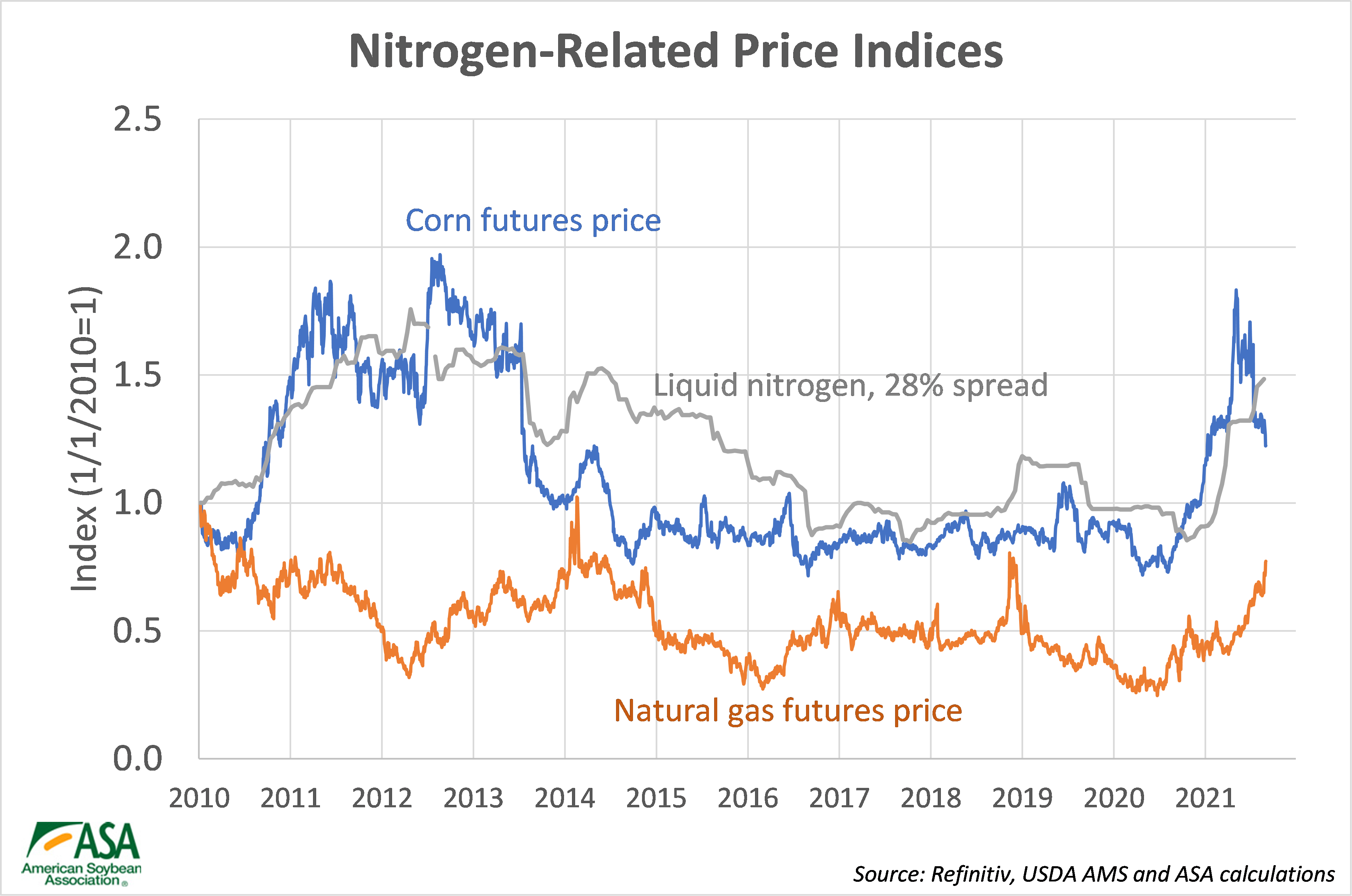 Multiple other factors have also contributed to fertilizer price increases. Fortunately, fertilizer producers have remained resilient during the Covid-19 pandemic. High crop prices are also increasing foreign demand. China is suspending some exports of nutrients to ensure domestic supply. The fertilizer industry is global, and the Baltic Dry Index, a measure of shipping costs, has more than tripled since late 2000. The sector has also experienced recent import duties. The U.S. government recently levied sanctions on Belarus related to its election and an international airline incident. Belarus produces about 20% of the world’s phosphate supply.  The sanctions will begin December 8, 2021.

Likewise, phosphates are experiencing price-increasing changes in trade policy. Mosaic filed a petition with the International Trade Commission (ITC) and Commerce Department in June 2020 alleging injury by subsidized imports of phosphates from Morocco and Russia. The Department of Commerce investigate and affirmed the allegations. The International Trade Commission imposed countervailing duties (CVDs)—i.e., tariffs—on Moroccan phosphates of about 20% and an array on Russian phosphates from 9% to more than 47% depending on the company. It is worth noting that Mosaic has a market share for phosphates in the U.S. of 63% and the next largest supplier, Nutrien, has a market share of 29%. Additionally, during the trade war with China, Section 301 tariffs were imposed on phosphates from the country at a rate of 25%. Although China does not traditionally ship phosphates to the U.S., before export restrictions it was the largest exporter, providing about one third of world exports.

While the ITC did not finalize its ruling until April 2021, imports during the investigation would be subject to the potential CVD’s retroactively, which essentially eliminated U.S. phosphate imports from Morocco and Russia starting in the latter half of 2020. In 2021, Jordan and Morocco have increased their phosphate shipments to the U.S. 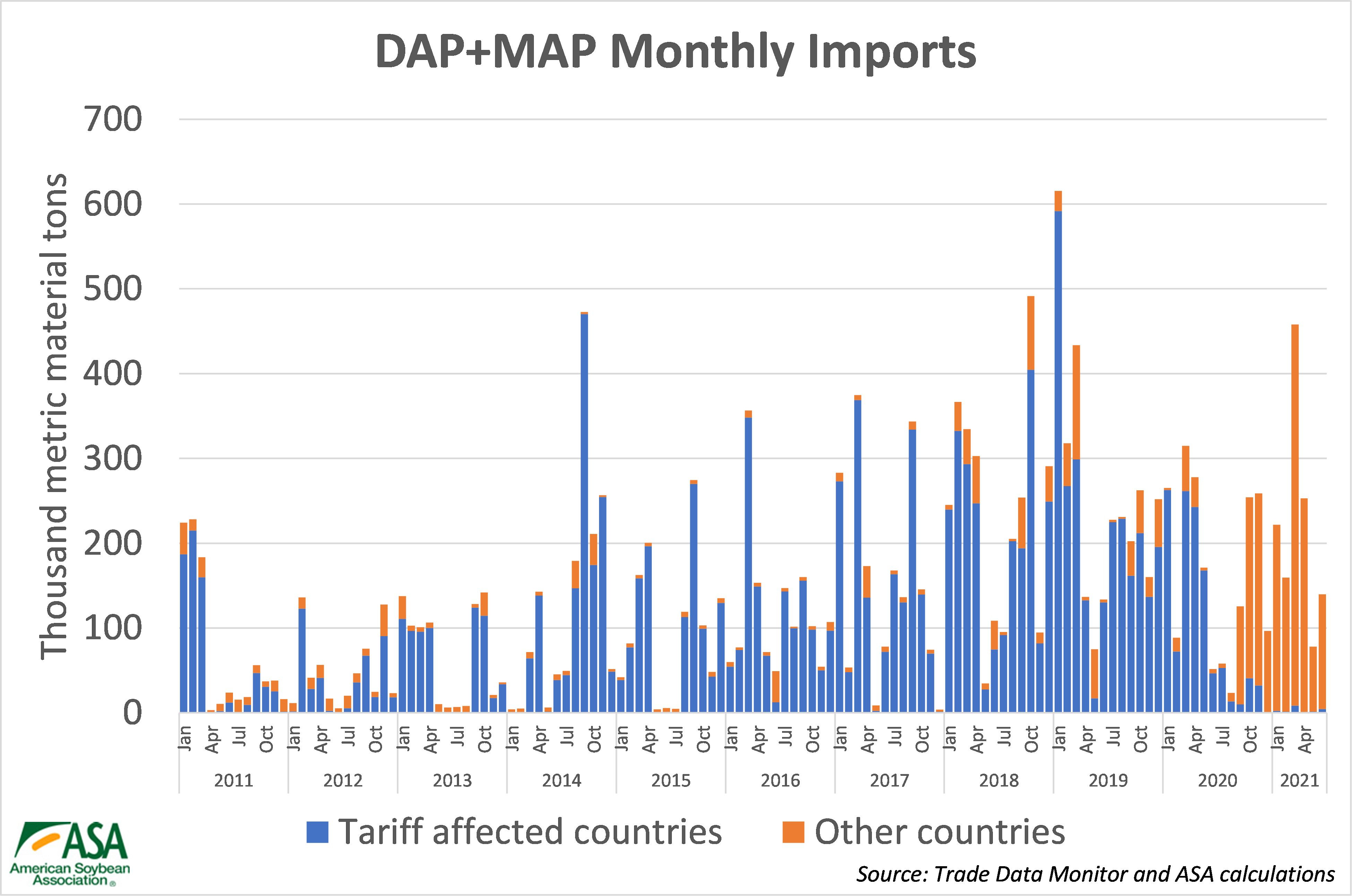 However, these two countries cannot replace the volumes from Russia and Morocco. As a result, total phosphate year-to-date U.S. imports are down from the 2019 levels despite an increase in area planted. Phosphate imports into the U.S. had been steadily growing, even during 2019, but fell in 2020 with the potential for retroactive CVDs. The world exports from countries unaffected by U.S. tariffs before they were in place was less than those from the affected countries. In short, there was not enough product being shipped to simply reroute and offset the tariffs. These duties remain in place for five years. 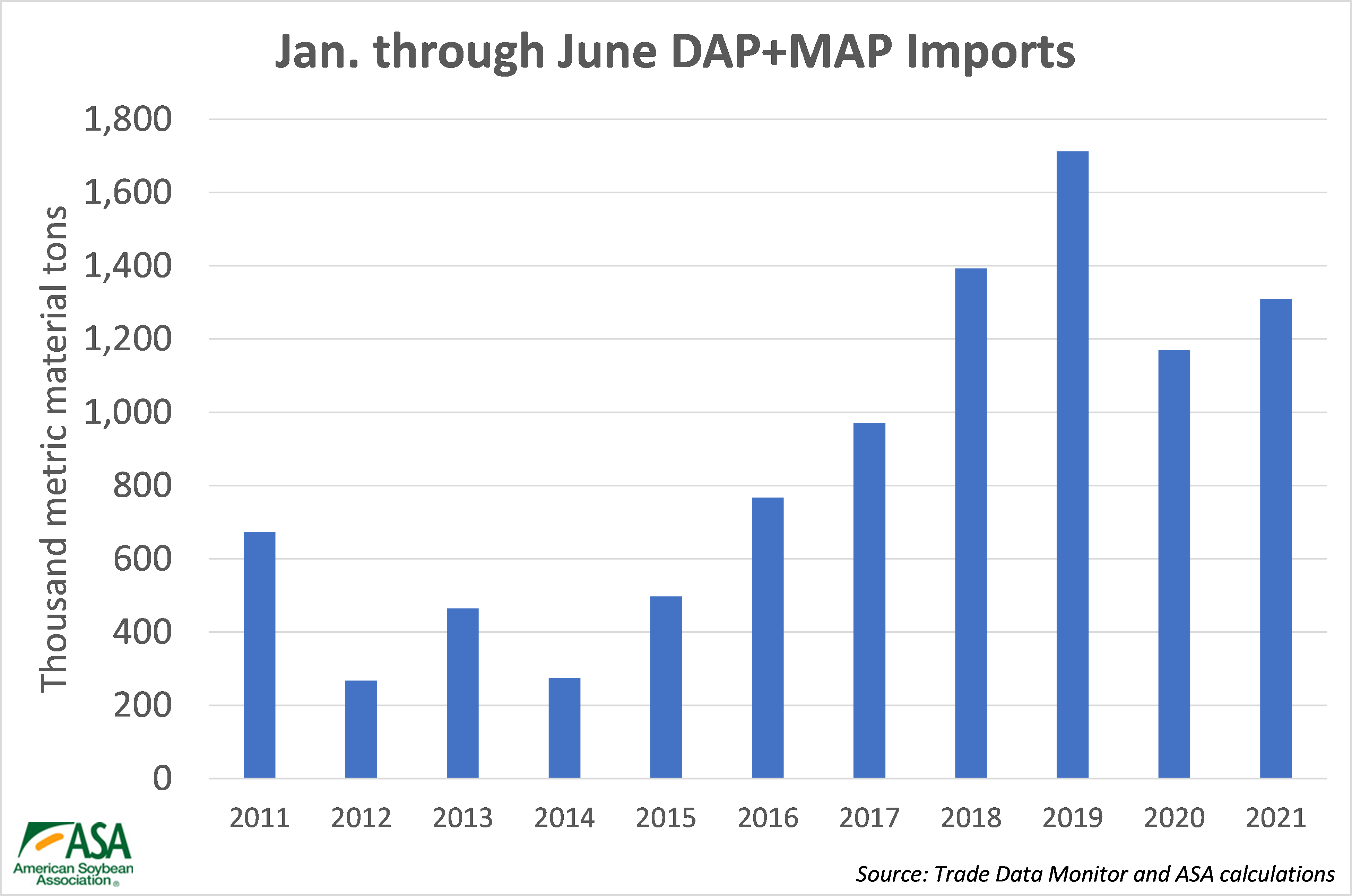 Urea ammonium nitrate (UAN) is facing a situation similar to phosphates. CF Industries has petitioned the Commerce Department and ITC to implement CVDs against imports from Russia and Trinidad and Tobago. According to the United Nation’s FAO data, UAN provided for over 25% of the nitrogen supplied through fertilizers in the U.S. for 2019, the latest year data was available. In the same year, imports provided 27% of the UAN used for agriculture. Of the imports, 84% came from Russia and Trinidad and Tobago (Figure 7). It is worth noting that UAN is generally not applied to soybeans, as it only contains nitrogen. 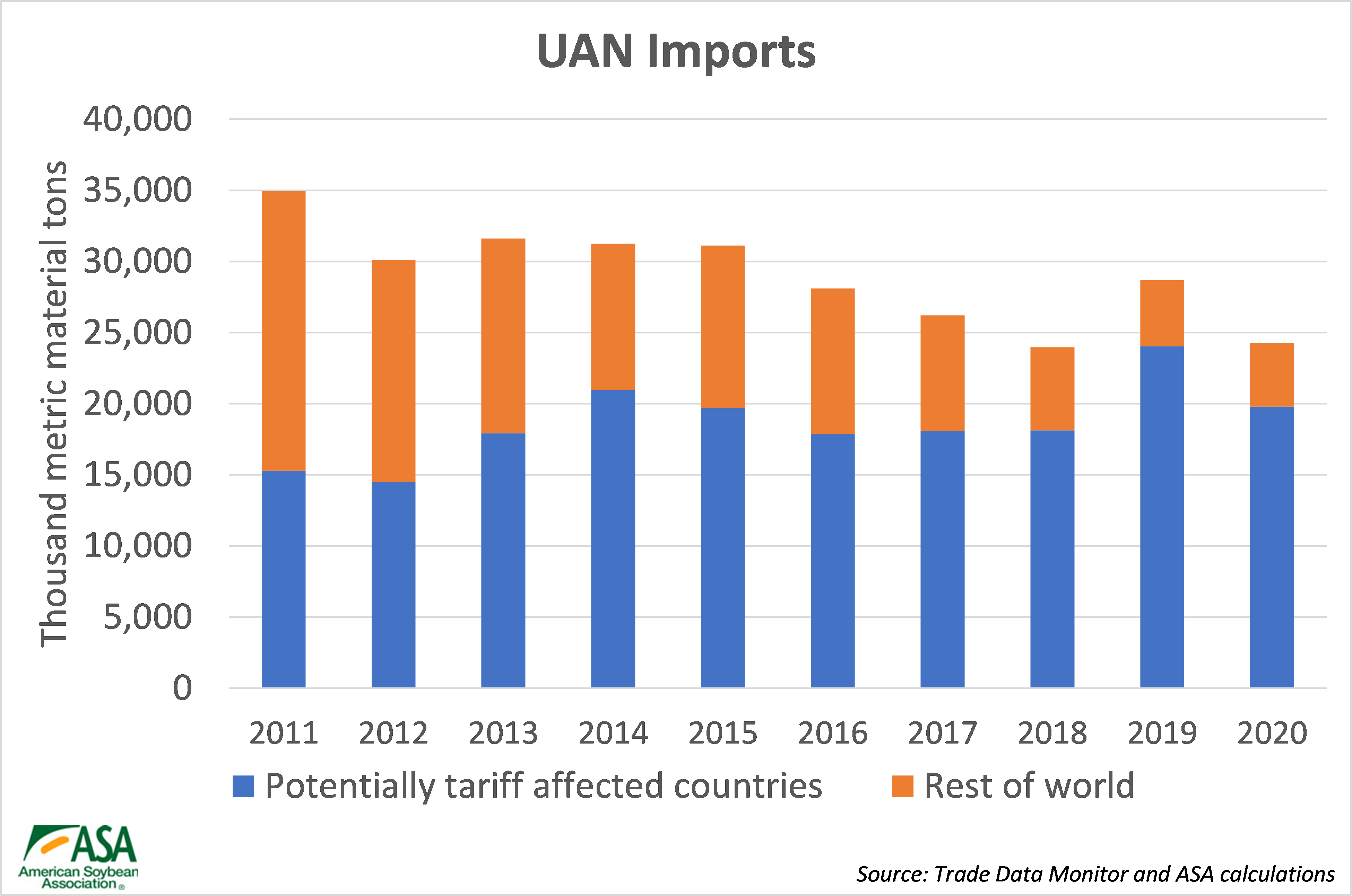 Rising fertilizer costs have been noteworthy, as they have roughly doubled within the past year. Higher prices and less prevented planting have contributed to this situation. Other factors such as natural gas availability and shipping costs have furthered the movement. Last of all, policy changes including China’s restricting of exports and tariffs that have been imposed or are being considered have pushed back domestic supplies during a time of high demand.

Update 11/10/21: The Belarus potash trade numbers and impact of the sanctions have been corrected.