Economist’s Angle: What’s in the Inflation Reduction Act for Soybeans?

In the world of economic policy, IRA no longer stands for just “Individual Retirement Account,” but also “Inflation Reduction Act.” This package, signed into law by President Biden September 16, was passed by Congress through budget reconciliation, a method that carries extra restrictions affecting the content and funding timelines of certain provisions within the bill. The Inflation Reduction Act, or reconciliation bill, addresses tax issues, prescription drug costs and energy and climate change, among other things. This article examines portions of the new law that affect soybeans, particularly conservation programs and biofuels. 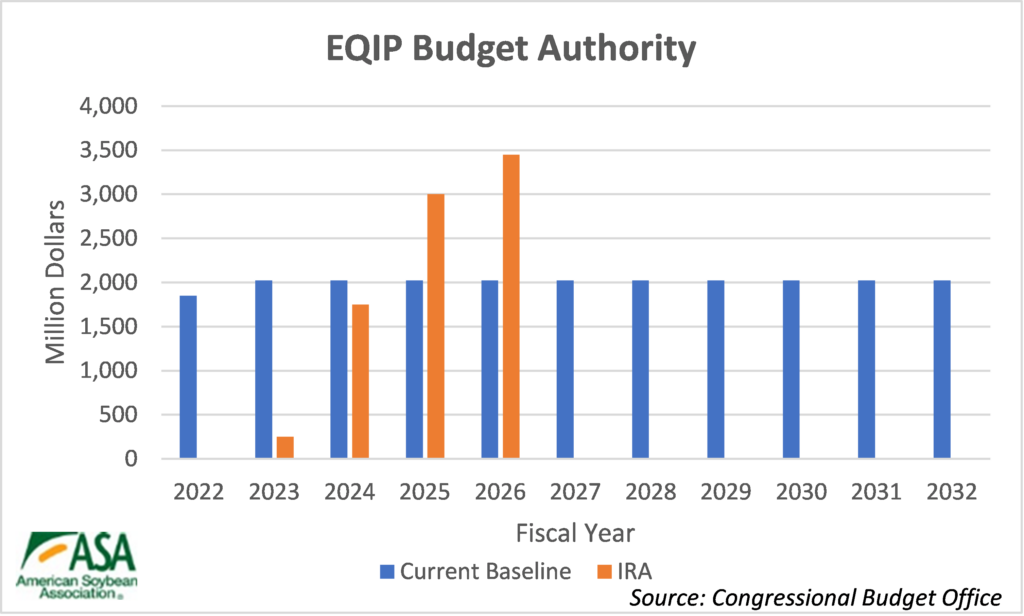 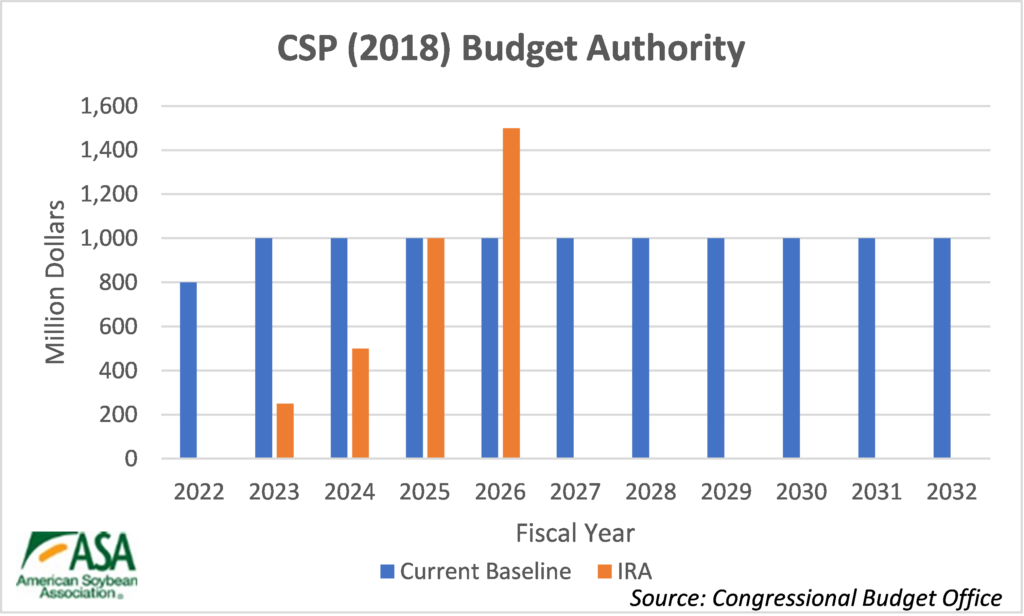 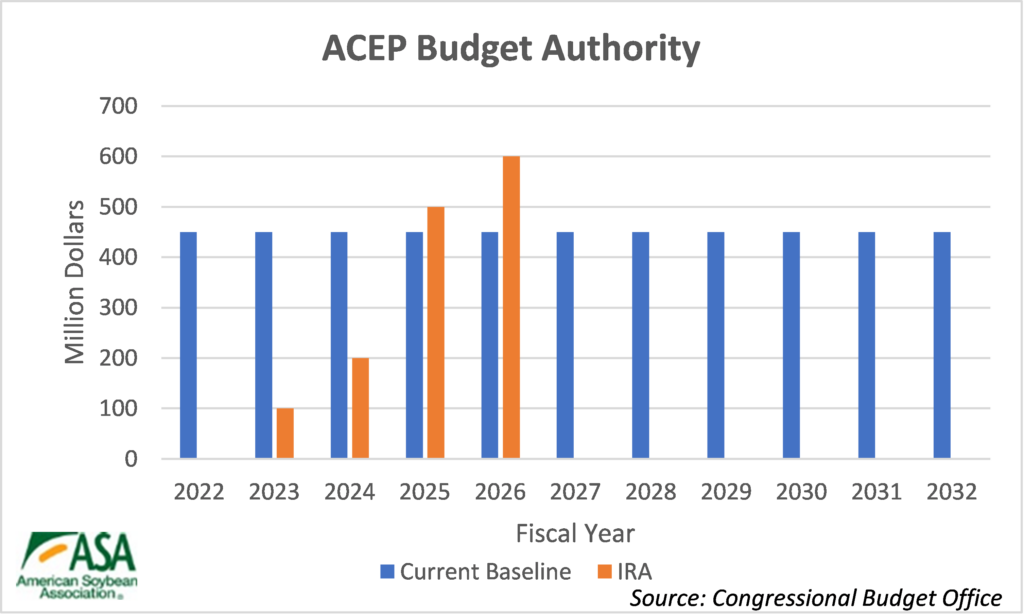 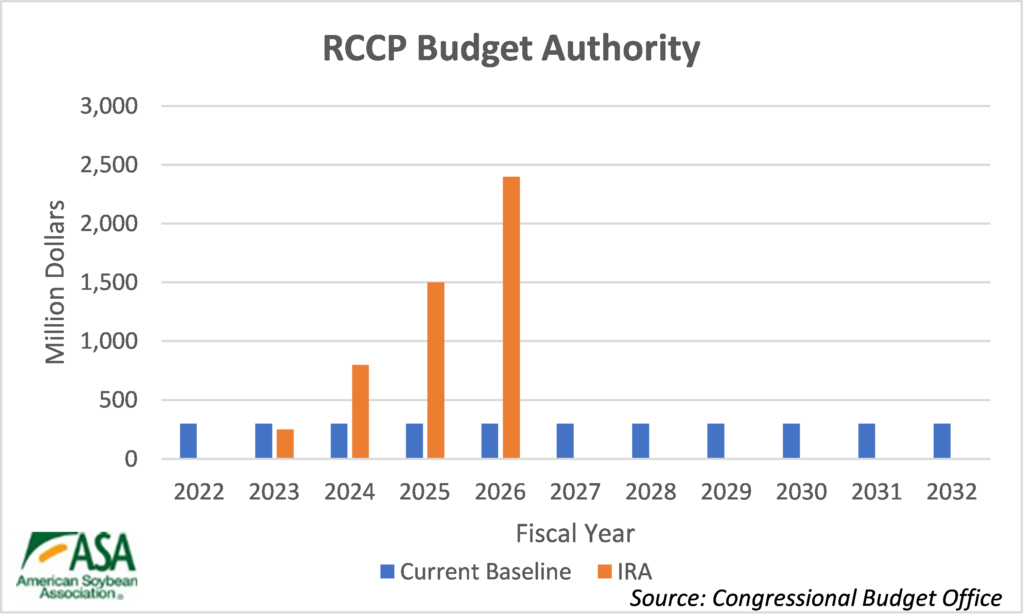 While the preceding information outlines budget authority through FY26, that is only when the funds are committed, not necessarily spent. For these programs, USDA’s Natural Resources Conservation Service will implement producer contracts with the budget authority it has for each fiscal year, but the programs often disburse (outlay) annual payments over the contract period to producers. For practical purposes, USDA is simply committing the funds during the years specified in the IRA. In fact, $10.98 billion of the $15.31 billion in estimated outlays occurs in fiscal years 2027 to 2031. The estimated outlays are less in sum than the budget authority as some of the programs are subject to sequestration. 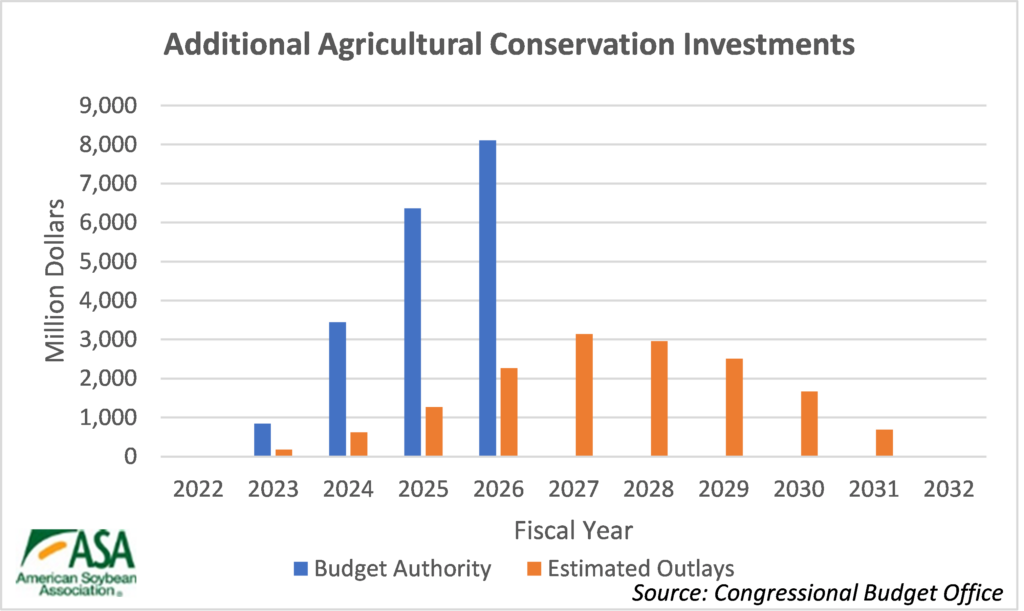 One very important issue must be kept in mind when comparing baseline spending to the funding in the IRA. While the baseline is permanent funding, the IRA funds are not. Senate rules prevent reconciliation bills from increasing the budget beyond a certain window, usually 10 years. As a result, reconciliation cannot be used to create permanent funding like the farm bill can. Therefore, under current law, the IRA funds are a one-time infusion that doesn’t directly add baseline for the farm bill. However, the funds do potentially provide an offset that could be used to establish permanent baseline in the farm bill, even if the money stayed in the conservation programs.

The IRA provides additional budget authority of $1.40 billion for conservation in addition to the programs outlined above. Of this, $1.00 billion is for NRCS to provide technical assistance to growers and other stakeholders. Another portion ($300 million) is available for NRCS to collect field-based data to quantify carbon sequestration from conservation practices, and an additional $100 million is set aside for administration of the programs.

The reconciliation package also included provisions for biofuels. The Biodiesel Tax Credit provides a $1 per biofuel gallon tax credit to entities that blend renewable diesel or biodiesel with petroleum diesel. The provision was set to expire at the end of 2022 but is now extended until the end of 2024. The IRA also creates a sustainable aviation fuel credit in calendar years 2023 and 2024. It provides a credit of $1.25 plus $.01 per each percent of lifecycle greenhouse gas emissions reduction below 50%. In other words, SAF with a 60% GHG emission reduction would receive a credit of $1.35. The total credit cannot exceed $1.75 per gallon. However, if the emission reduction is not at least 50%, the SAF does not qualify for any of the credit, even the base $1.25 per gallon. The method used to determine the GHG emissions will be critical in determining the credit eligibility and amount. The IRA specifies that the Carbon Offsetting and Reduction Scheme for International Aviation adopted by the International Civil Aviation Organization is one model to be used for the scoring. Under that model, soybean oil based SAF would not qualify for the credit. However, the IRA allows for other models that have similar methodology to CORSIA to be used. One of the likely candidates is the Greenhouse gases, Regulated Emissions, and Energy use In Technologies Model (GREET) Model from the Argonne National Laboratory. A modified version of this model is used for California’s low carbon fuel program. With GREET, soybean oil-based SAF would likely qualify for the SAF credit.

Starting in 2025, the BTC and SAF credits would be merged into a Clean Fuel Production Credit that would continue through the end of 2027. This credit would go to biofuel producers instead of blenders as with the BTC. The credit amount for biodiesel and renewable diesel will generally be $1.00 - $.02 x fuel emissions rate for fuels with emissions rates less than 50 kg of CO2 per mmBTU. The emissions scoring is to be done with the GREET model. The latest GREET numbers indicate a score of 32 for soy-based biodiesel and 34 for soy-based renewable diesel which would translate into payments of $.36 and $.31 per gallon, respectively. The payments are indexed to inflation. For SAF, the production credit would generally be $1.75 - $.035 x fuel emissions rate as long as the emissions rate is below 50 kg of CO2 per mmBTU. As with the SAF credit in effect for 2024 and 2025, the CORSIA model would be used with an allowance for other models with similar methodology. The SAF rate would also adjust for inflation.

While the conservation provisions of the IRA provide fixed spending levels, the biofuel credit provisions provide just payment rates. The CBO estimated what they thought the actual spending levels would be by fiscal year. The standalone SAF credit is projected to cost $49 million over the two calendar years of the program. This would correspond to no more than 40 million gallons of production over those years. The BTC would produce credits of about $5.57 billion over two calendar years, and the CFPC would total about $2.95 billion over three. While we don’t know CBO’s underlying assumptions about trends in biofuel consumption, a primary reason for the lower spending per year is likely that the payment rates are expected to be less during that period. Only if a pathway had an emission score of 0 would it continue to receive the same payment rate as it did in the 2023 and 2024 period. 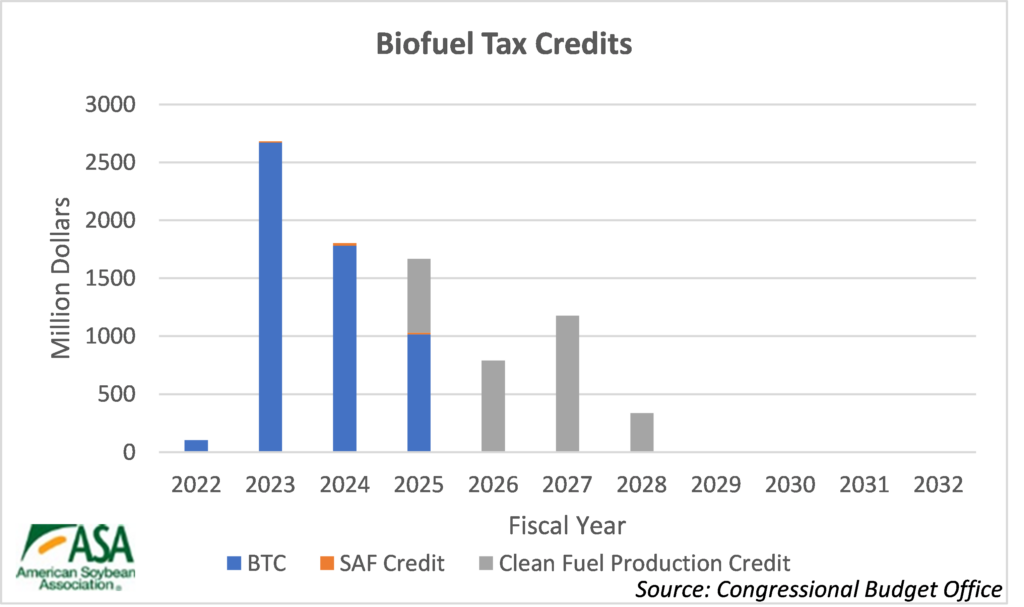 Another biofuel-related measure included in reconciliation is the Biofuel Infrastructure and Agriculture Product Market Expansion. This provides $500 million through September 30, 2031, to provide grants to improve infrastructure—outside of production facilities—for the sale and use of agricultural commodity-based fuels. Eligible fuel infrastructure for the grant includes biodiesel, home heating oil and ethanol.

While the IRA includes many more provisions than outlined here, the highlighted ones impact agricultural—and specifically, soybeans—in significant ways. The package includes about a 28% increase in conservation funding to current programs. Importantly, this is a one-time injection that does not build baseline at this point. The IRA also extends the BTC and creates a SAF credit. These programs will transition to a producer credit that is dependent on the emissions score of the fuel. The emission modeling efforts over the next few years will be important in determining the final credit rates under the program.