Economist’s Angle: Where Do Phase One Purchases Stand?

The United States and People’s Republic of China signed the Phase One economic and trade agreement Jan. 15, 2020. The two-year agreement covered a myriad of issues including intellectual property rights and currency rates. Two of the six chapters deal directly with agriculture. The first establishes agreement on trade practices, and the second sets targets for Chinese imports in 2020 and 2021. Recently, both the U.S. Trade Representative (USTR) in conjunction with the U.S. Department of Agriculture (USDA) and the Peterson Institute for International economics released reports on the progress made in reaching the targets outlined in the Phase One agreement, and those reports offer differing viewpoints. This article examines those reports and attempts to estimate what is possible at this date.

The USTR/USDA report indicates that China has implemented 50 of the 57 structural changes agreed to in Phase One. Some of these include allowing the imports of U.S. poultry meat, U.S. barley for processing and expanding importation eligibility for U.S. beef and pork products. The agreement also addresses phytosanitary issues in poultry importation by regionalizing the production areas of the United States: If there is a future outbreak of avian influenza or other pathogens in one region of the U.S., the other,  unaffected regions can continue exports to China.

The trade targets in the Phase One agreement include 217 agricultural products that are grouped into six categories. The ag trade to China from the U.S. is supposed to increase $12.5 billion above 2017 levels in 2020 and $19.5 above the 2017 levels in 2021. Discrepancy exists between the U.S.’s measure of the value of exports to China and China’s measure of the value of imports from the U.S. This occurs for multiple reasons. One of these is the delay between a vessel leaving the U.S. and arriving in China. This creates the possibility that a shipment may leave the U.S. in one period and arrive in China the next, creating a discrepancy for those periods. Another reason is the different type of port prices. U.S. export values are priced as free alongside (F.A.S.), which means loading or clearing costs are not included. Chinese imports are measured using the cost, insurance and freight (C.I.F) term, which will tend to be higher. It is assumed that Phase One targets will be measured using C.I.F. and that they must reach China within the calendar year to count. As a result, Chinese imports provide a better metric than U.S. exports for measuring the progress of the deal.

Figure 1 shows the value of Chinese agricultural imports from the U.S. for 2020 by category through the last data point in September 2020. The boxes represent the relative size of the value. Soybeans comprise the entire oilseeds category of the agreement and are the largest product and category. The other leading products are cotton, pork and sorghum. The “Food Preparations Nesoi” is the largest product in “other” and represents food preparations not specified elsewhere in the list of imported products. 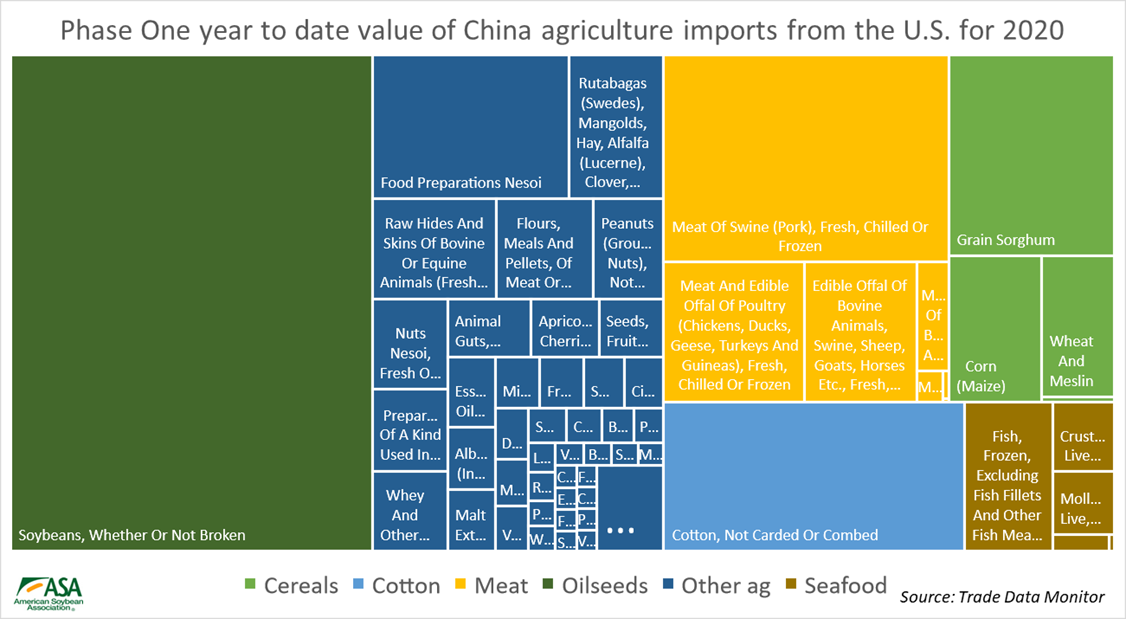 Through September 2020, China’s Phase One imports of ag products totaled $12.9 billion, while the same period in 2017 totaled $16.5 billion. Perspectives on China’s progress to meeting the trade value targets set forth in the agreement vary depending upon the statistics under consideration. For example, the Peterson Institute for International Economics (PIIE) points out that, “China’s purchases were… 52 percent of their year-to-date targets.” PIIE seasonally adjusted the trade targets and calculated that $25.0 billion of imports needed to have already occurred to be on track. This perspective shows that China is behind the pace needed to meet the target given normal seasonal patterns of trade flows. 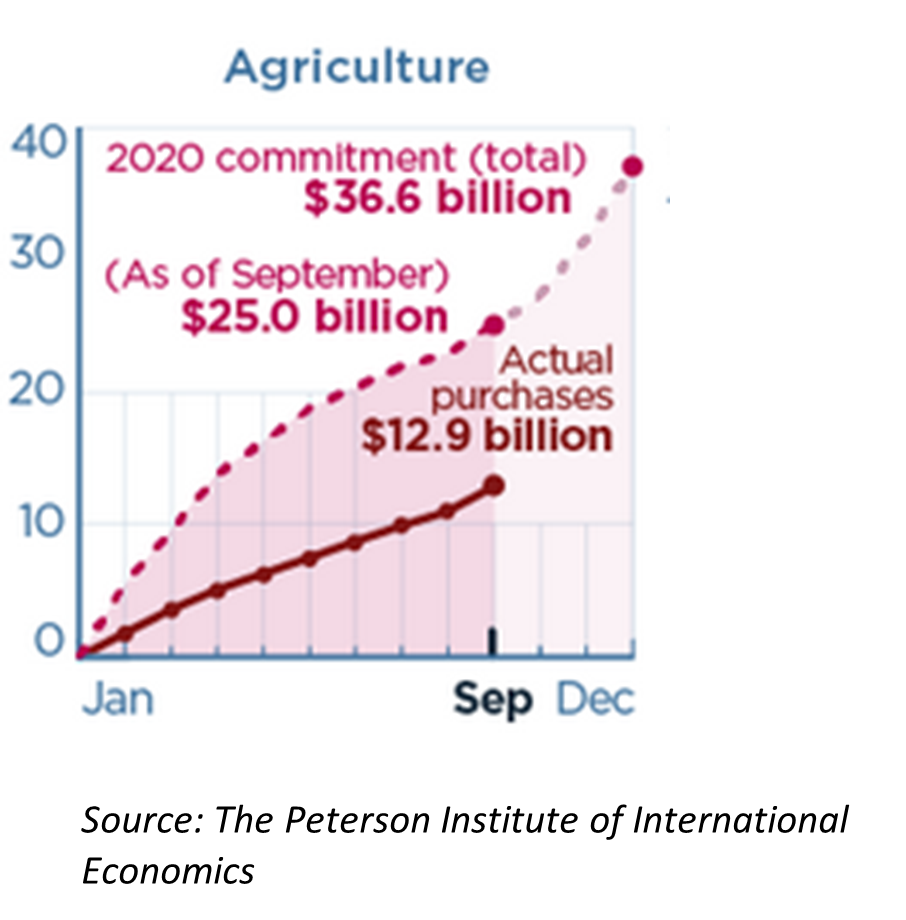 On the other hand, the USTR/USDA report points out that 2020 U.S. agricultural exports to China have exceeded 2017 in every month since April (Figure 3). While trade started slowly for the year, the early part of the year is typically less critical than the end of the year. However, this does not take into consideration that 2020 levels are supposed to be $12.5 billion above 2017 levels. 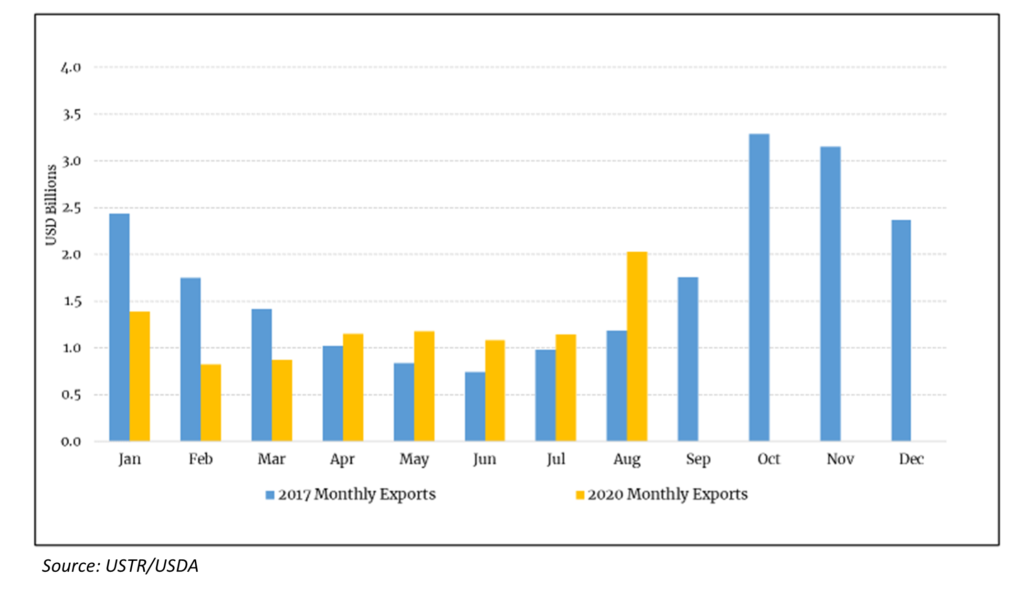 Figure 4 breaks out the monthly numbers into the Phase One product categories. It is worth noting that the targets for individual products and categories has not been released. Pork shipments to China have been outstanding, which kept 2020 meat trade above 2017 levels. Most other categories remained at roughly their 2017 levels until August. The exception to this is soybeans (oilseeds). January 2020 levels were $1.5 billion below the same month in 2017. For most of the year, soybean shipments to China remained below 2017 levels while China purchased South American soybeans. However, the threshold was crossed in August, and 2020 monthly levels now exceed 2017 levels.

As USTR and USDA point out in their report, soybean purchases for 2020 have been extraordinary and exceed 2017 year-to-date levels by about $4 billion. While this is certainly beneficial for increasing exports, it is not a perfect measure of meeting 2020 commitments. First, the sales do not have to translate into shipments that reach China by the end of the year. Second, sales can be canceled, so the number may not perfectly translate into actual shipments.

Even so, sales do lead shipments, and the data is starting to reflect that. The USDA FAS Export Sales Query System provides weekly volumes shipped (through Oct. 22 as of this writing). The exports of soybeans have been growing rapidly to about 2 million metric tons per week for the past two weeks (Figure 5). The time remaining in the year will be a limiting factor to meet the agreement. Refinitiv,  a global provider of financial market data and infrastructure, estimates that it takes 31.4 days of travel to get a shipment from New Orleans to Qingdao, which is a major port for soybeans in China. Likewise, it is estimated to take 16.2 days to get from the Pacific Northwest to the same port. 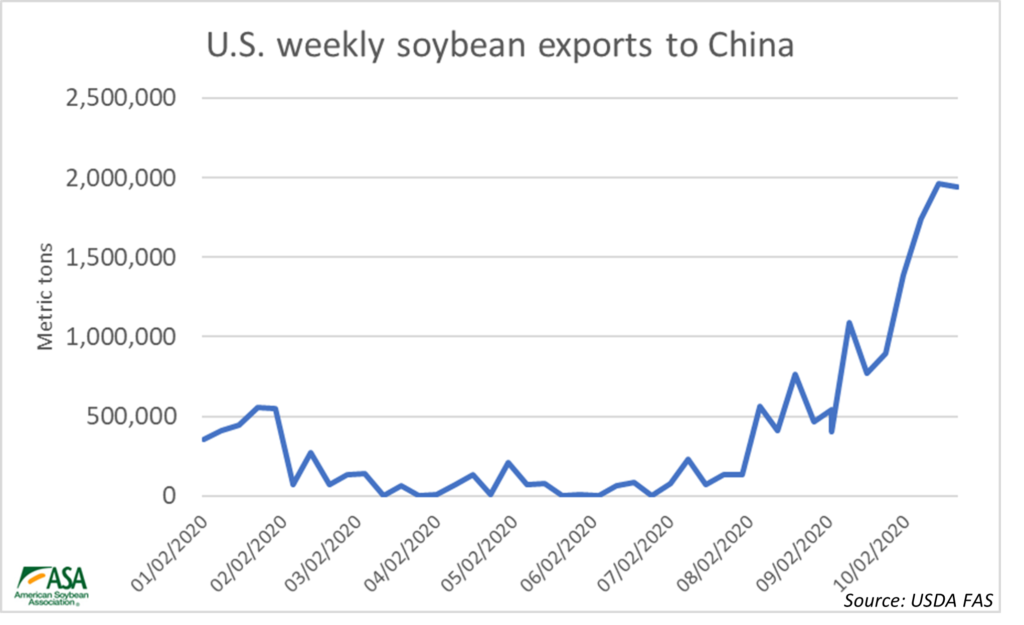 Under the assumption that soybeans shipped through the beginning of December can reach China before year’s end and that the current pace continues, there would be about an additional 21.3 million metric tons of Chinese imports of U.S. soybeans for 2020. If this is multiplied by the average China CIF price for U.S. beans in September of $392 per metric ton, this translates into an additional $8.3 billion in China’s imports of U.S. soybeans for 2020. Although the other agricultural product categories to China have been increasing, holding them at their September values for the rest of the year would result in an additional $4.2 billion in Chinese imports. Adding this figure to the $8.3 billion worth of 2020 soybean imports, along with the sales thus far in the year of $12.9 billion, would total $25.4 billion, which is short of the of the $36.6 billion in the agreement. Even if shipments remain strong, it seems unlikely that the target can be met.

Chinese imports of U.S. agricultural products started the year slowly, yet that has changed dramatically. Measures that look at what has been purchased thus far for 2020 under Phase One show that China is behind schedule. Even considering the recent large shipments, it is unlikely that China could still reach the target for this year. However, these shipments have helped buoy farm prices and sales look to be strong into next year.