The China trade war in 2018 and 2019 had a large effect on U.S. agriculture and was particularly devastating for soybeans. USDA’s Economic Research Service (ERS) released a report this month at the behest of the House Committee on Appropriations quantifying these impacts. ERS found that, mid-2018 through 2019, U.S. agricultural commodities lost $27.2 billion with more than 70% of those losses accruing to soy. Midwestern states tended to experience the largest losses.

The tariffs examined in ERS’s report are specifically those that were in retaliation to U.S. tariffs applied during that recent trade war. A Department of Commerce investigation determined that steel and aluminum were being imported to the U.S. in a manner creating national security concerns. As a result, the White House levied Section 232 tariffs of 25% on steel and 10% on aluminum. Canada, China, the European Union (EU), India, Mexico and Turkey responded with retaliatory tariffs. Similarly, the White House instructed the U.S. Trade Representative (USTR) to investigate China’s policies regarding intellectual property and technology transfer. The USTR found issues with China’s policies, and Section 301 tariffs of 25% were applied across a wide range of Chinese goods. China retaliated with tariffs ranging from 5-25% on many U.S. goods including agricultural products.

Despite the thousands of agricultural products facing retaliatory tariffs, the majority of losses accrued to soybeans. In fact, over 70% of agricultural losses due to all retaliatory tariffs were experienced by soybeans. This is consistent with the fact that soybeans are the largest U.S. agricultural export by value, and over half the exports were destined for China before trade issues arose. Sorghum had the next largest loss with 6.5% of the total, as most of U.S. sorghum exports were bound for China before trade tensions arose. 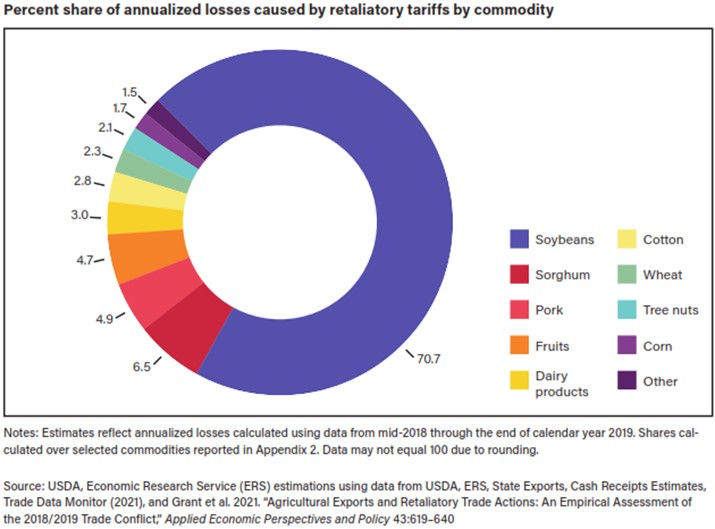 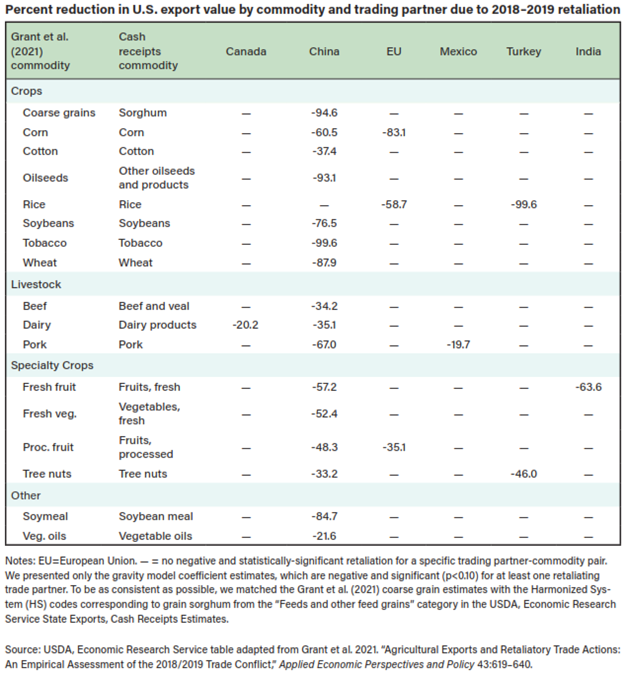 ERS estimated trade losses by state and ag product. It did this by utilizing the ERS data set of exports by commodity and state. This dataset is created by allocating total U.S. exports of the product by the share of cash receipts for crop sales by state. As a result, the shares of export losses by state in the ERS report largely reflect the value of production by state. Soybean losses were most concentrated in the Midwest, with Illinois, Iowa and Minnesota, respectively, experiencing the highest losses. This is the same order of total soybean acres by state for those years. 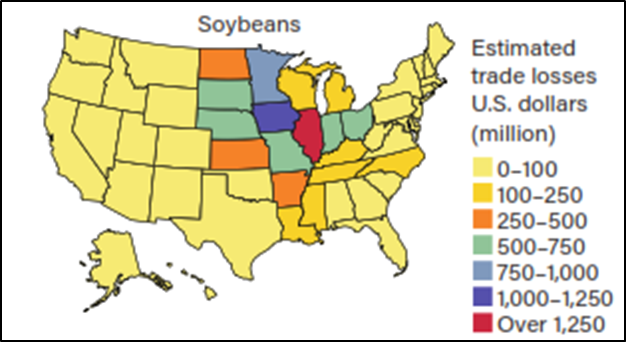 Adding all the ag products to the map presents a more complex picture. Iowa losses increased, as pork losses accrued to the state. Kansas losses also increased due to sorghum. This same commodity also resulted in losses for Texas. Fruit and nut losses in California also bring that state into focus. The geographic scope of the losses becomes more diverse when including more commodities, but the bulk are still concentrated in the central part of the country because of soybeans. 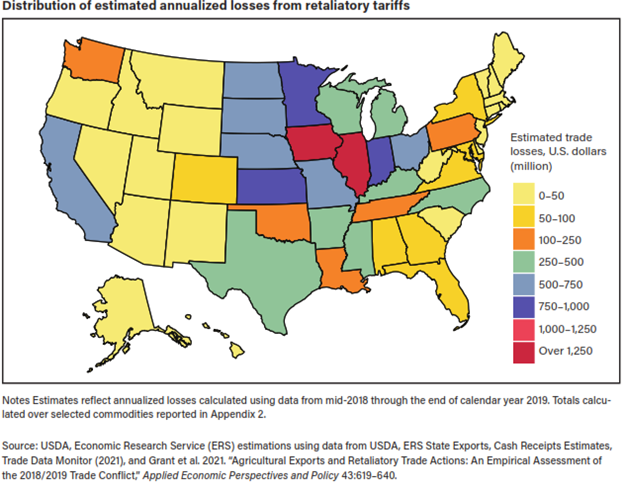 China and the U.S. signed the Phase One trade deal in early 2020. This committed China to purchase targets for many U.S. agricultural products. Furthermore, China soon exempted many key U.S. products from the tariffs. It is worth noting, this was not the same as eliminating the tariffs; soybean tariffs, specifically, remain on the books. However, this agreement opened the door to resuming trade. China’s imports of ag products went from $22 billion in calendar year 2017 to $28 billion in approximately the first year after the Phase One agreement was signed (March 2020 to February 2021), according to ERS. This represented more than a 25% increase in the country’s imports. Yet, China’s ag imports from non-U.S. countries increased even faster. As a result, the U.S. now has a smaller share of that pie: 17% in approximately the first year of Phase One compared to 20% in calendar year 2017. U.S. ag exports to China have grown but not at the same pace as other exporters. 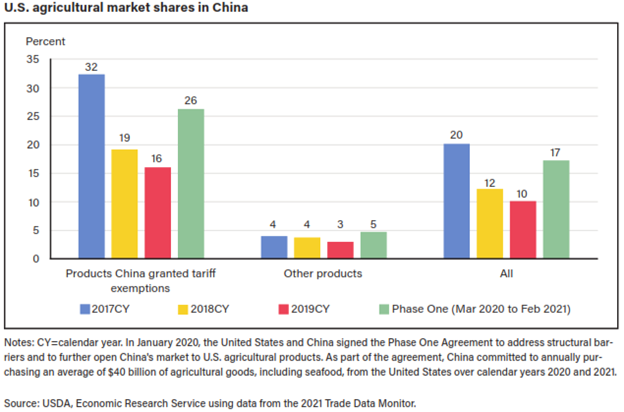 While the targets for the Phase One agreement have expired, the agreement remains in effect and states that the countries will maintain the trade trajectories through 2025. Maintaining trade throughout the world is critical for all of U.S. agriculture but particularly to soybeans. Trade losses of over $27 billion cannot easily be offset. Additionally, the disruptions have consequences for long-term relationships, which can suffer and subsequently result in loss of U.S. market share even after the dust settles. Sustaining existing trade relationships and developing new markets is critical for agriculture and rural incomes.