The American Soybean Association (ASA) presented Wayne and Ruth Fredericks from Osage, Iowa, with the 2022 National Conservation Legacy Award during the annual ASA Awards Banquet at Commodity Classic on March 11, 2022. 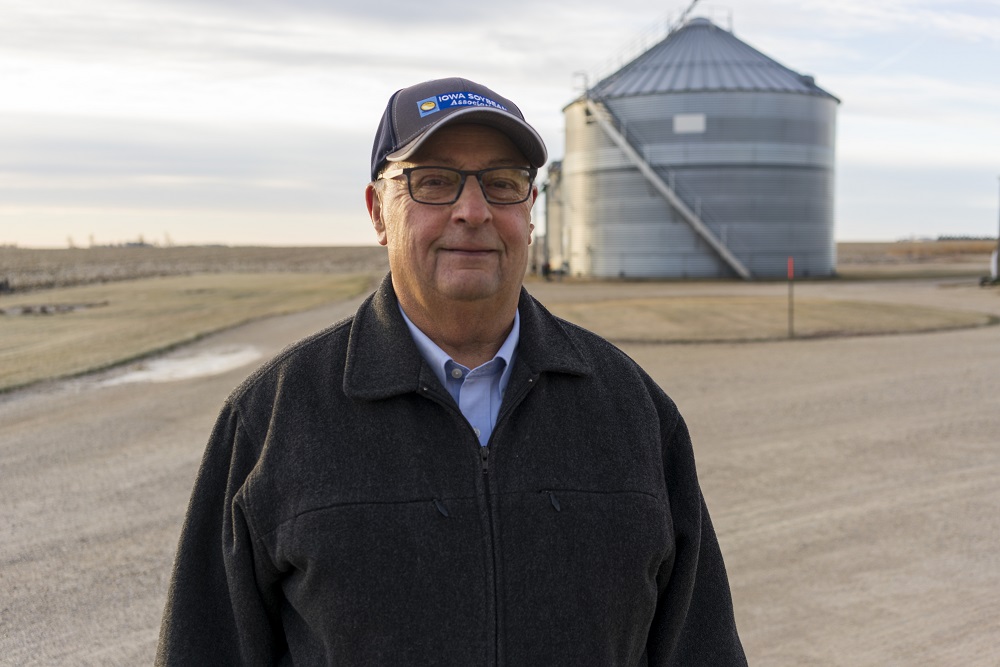 The Conservation Legacy Awards program is a national program designed to recognize the outstanding environmental and conservation achievements of soybean farmers that help produce more sustainable U.S. soybeans. Along with ASA, the program is co-sponsored by BASF, Bayer, Nutrien, the United Soybean Board/Our Soy Checkoff and Valent.

Fredericks calls himself the “accidental conservationist.” When he started farming in 1973, he believed a fully conventional tillage operation was the only way to go. But after nearly 20 years, Mother Nature stepped in and upended those plans on the Osage, Iowa, farm, turning Fredericks into a lifetime proponent of all things conservation.

“Our land needed the plow to raise soybeans successfully, or so I thought,” he says. “For the first 19 years, I plowed all my cornstalks ahead of soybeans, and I worked all my soybean stubble ahead of corn. In the winter of 1991, I was faced with a challenge I had yet to encounter. My farmland froze early, and I had not gotten my cornstalks plowed. What was I going to do?”

On the advice of his John Deere dealer, Fredericks planted his soybeans with a drill the following season. The crop performed well, weeds were under control and a smooth harvest led to strong yields. Fredericks never looked back, and today after almost 50 years farming with his wife, Ruth, the 756-acre farm of corn and soybeans is in a no-till/strip-till rotation. The farm also includes about eight acres of pollinator habitat enrolled in the Conservation Reserve Program (CRP).

“Strip-till corn came about a decade after no-till. The technology evolved and showed very real promise for those of us farming in colder, wetter climates,” says Fredericks. “I live and farm ‘just south of the North Pole,’ where many farmers believe it is too cold to practice no-till or to plant cover crops. I have proven them wrong.”

Fredericks says his goal became one of setting an example for other farmers by successfully showing that no-till and cover crops work, sharing information he learned and trying to make a dramatic difference on a large scale. As part of that effort, in 2008 he began working on replicated strip trials with the Iowa Soybean Association’s (ISA) On-Farm Network.

“To date, I have done over 100 replicated trials,” he says. “In 2016, while serving as president of ISA, Iowa was amid the Des Moines Water Works lawsuit against three northwest counties over nitrate levels in the Racoon River. I immediately moved from 50% to 100% in planting cover crops, and I knew from water sampling that it would dramatically re

duce nitrates in tile drainage water. Everything we do on land affects someone else’s water downstream.”

Fredericks has seen positive results on his soils as well. “We learned early on that there was a huge reduction in the amount of organic matter in our soil under tillage. In a long-term study that looked at some of our farm, we nearly doubled our organic matter in 30 years after we quit conventional tillage and went to no-till, strip-till and now, cover crops,” he says. “Organic matter helps build soil structure and can supplement additional moisture needs when it gets dry.”

Fredericks has also undertaken conservation practices beyond his crop fields. In 2014, he completed a farm profitability analysis to enroll in the Conservation Reserve Program (CRP).

“We found some spots in our corn-soybean rotation that were not, necessarily, always profitable,” he says. “By placing them in a conservation program, we could improve our bottom-line profitability but also provide wonderful habitat for monarch butterflies and other species.”

He had noticed a dramatic loss in the population of monarchs at about the same time. Since farming practices in the Midwest were partly blamed, he wanted to help protect the species. He seeded seven acres of pollinators across seven different locations and became ASA’s representative to Farmers for Monarchs, an initiative of the Keystone Policy Center. The small sites also provided new habitats for wildlife. One pollinator habitat next to the farm’s windbreak has added to the winter traffic of wildlife as animals find both food and protection in the area. Click here to read more about Fredericks’ operation.

The following individuals were recognized for receiving regional Conservation Legacy Awards during the awards program. Click on a name below to watch a video on each of the regional winners’ operations.

A national selection committee, composed of soybean farmers, conservationists, agronomists and natural resource professionals, evaluated nominations based on each farmer’s environmental and economic program. The achievements of these farmers serve as a positive example for other farmers and help produce a more sustainable U.S. soybean crop.