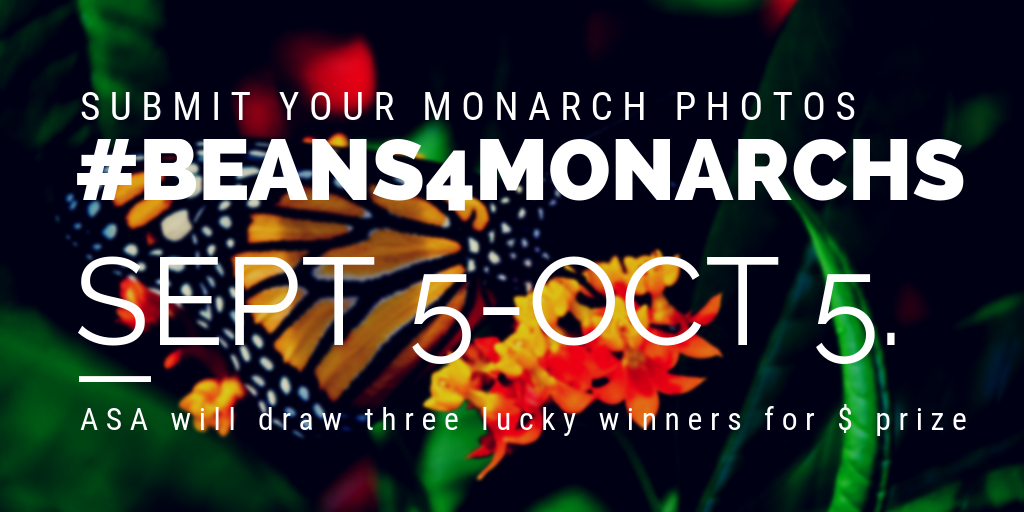 While trade issues remain top priority for the soy industry, the American Soybean Association (ASA) is taking a moment this fall to illuminate the importance of monarch habitat in its overall conservation efforts, which include soil and water quality, and pollinator preservation.

Starting September 5 and running through October 5, ASA’s Twitter, Instagram, and Facebook feeds will be aflutter with monarch messaging designed to shine a spotlight on monarch habitat importance. Outreach will include quick facts, links and suggestions to easily get involved, and a photo contest for farmers and other ASA friends and followers to upload snapshots of their efforts to plant milkweed and protect the pretty, beneficial butterflies.

Three randomly-selected participants who post their unique monarch or monarch habitat pics on Facebook, Instagram, or Twitter with the hashtag #Beans4Monarchs during the contest period will be selected to each win one $100 gift card, to be awarded in October. Photos can be posted directly to ASA social media platforms or on the participants’ feeds, so long as they include the #Beans4Monarchs hashtag and comply with the contest rules. ASA will cross-promote the contest throughout the month with interested and likeminded organizations to widen the social media circle cast on this issue and bring more awareness to why butterflies are important and how soy growers are making a difference in monarch habitats.

Monarch habitat promotes biodiversity and sustainability near farmlands, including attracting pollinators, improving soil health and water quality, housing natural enemies of crop pests, and increasing wildlife diversity. Yet, the monarch population has been alarmingly on the decline since the 1990s. The goal of ASA’s #Beans4Monarchs program is to help turn around those declining numbers and promote fit farmlands through healthy monarch habitat.