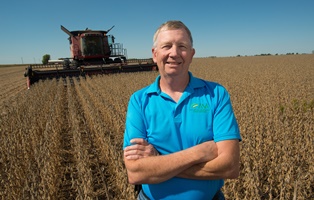 Writing from Washington, D.C. where I’m in town to attend the ASA March board meeting, and as issues like trade, RFS, the farm bill and infrastructure come into the national spotlight, I don’t think there could be a better time to be in our nation’s capital as a soy grower.

As the governing committee and board members meet with lawmakers and members of the Administration this week, below is a rundown of what we’ll be talking about:

Trade is vital for soybean growers, and we support negotiations that would produce a modernized NAFTA 2.0 and encourage the Administration to enhance trade with Asia-Pacific countries.

Additionally, the threat of Chinese retaliation on soybeans as a result of the Section 232 tariffs on imported steel and aluminum is top of mind for ASA. One in three rows of harvested soybeans are exported to China, and countries like Brazil are looking to bolster soy exports to China in America’s place. China is a valuable trading partner and rural America is looking at the very real possibility of being collateral damage in a trade war.

On the biodiesel front, ASA board members will be voicing strong opposition to a cap on the price of Renewable Identification Numbers (RINs), an action that would significantly undermine the integrity of the RFS, reduce biodiesel demand and violate President Trump’s promise to protect the RFS. Additionally, they’ll continue supporting the biodiesel tax extension credit.

Time with lawmakers cannot pass without voicing strong support for passing the 2018 Farm Bill on time to provide stability and certainty at a time of low crop prices and low farm income. ASA is promoting a Farm Bill that includes a strong farm safety net, maintaining the current crop insurance program which includes harvest price coverage.

Finally, infrastructure remains a top concern for ASA, and we continue to support funding of $8.8 billion over 10 years to complete upgrades to lock and dams on the Inland Waterways system that have been authorized by Congress. Our competitors in South America are making improvements to their infrastructure system and it’s vital the U.S. does the same to stay competitive in a global marketplace.

As I said before, it’s an important time to be representing soybeans in Washington, D.C. and not a responsibility I take lightly. Soybean growers need more trade opportunities, and dependable infrastructure to move our beans. We need programs that create soybean and soybean oil demand, and a Farm Bill that gives us the security and certainty to keep farming as we always have.