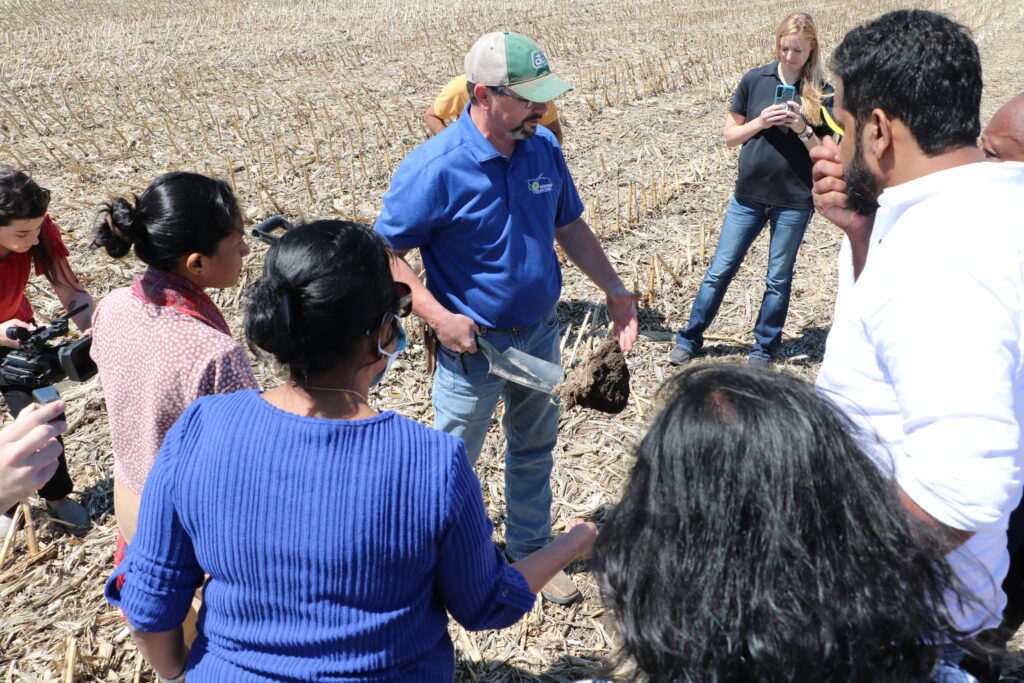 Nebraska Soybean Board Chairman Doug Saathoff hosts ASA/WISHH’s trade team comprised of seven food company leaders from Sri Lanka and one from Ghana. WISHH used USDA funds to support the trade team to give the company representatives a firsthand look at the quality of U.S. soy as well as introduce them to innovative ways to use soy in cereals, snacks and more.

ASA/WISHH’s trade team is in Nebraska this week where seven soyfood company leaders from Sri Lanka and one from Ghana are participating in the first Nebraska Soybean Board (NSB)-hosted WISHH trade team.  NSB Chairman Doug Saathoff gave the group a tour of his farm on May 16 to show how U.S. soy is produced to meet high standards for quality, safety and sustainability.

To provide further insight into the quality of U.S. soy and new ways to use soy, the trade team also toured an Ag Processing Inc. plant before participating in University of Nebraska-Lincoln Food Processing Center Extrusion Workshop.

WISHH is using U.S. Department of Agriculture Emerging Markets Program and Market Access Program funding to support the trade team. The participating South Asian food companies found the trade team is important to their innovation and growth strategies that include soy protein for cereals and snacks.

The CEO of the West African food company is a long-time WISHH strategic partner who uses soy protein to make nutritious fortified foods. Collaboration with WISHH contributed to him expanding the company to also produce poultry and other animal feeds made with soy. He described how WISHH works with his company to offer a reliable supply of affordable foods that meet protein demands in his country. “If you are a processor, you need to know how the crop traverses across the value chain,” said CEO Samuel Ntim Adu, in describing the importance of the trade team. “The thinking of moving from the farm to the holding area and to how it is processed and into the market is all very important.”