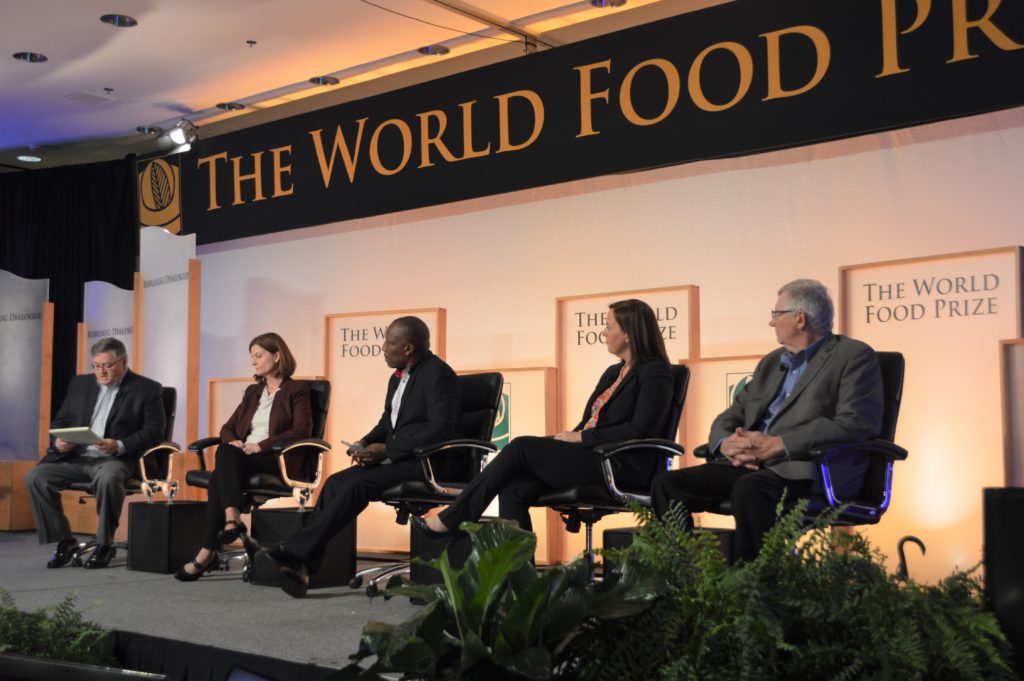 By 2050, the world population will reach an estimated 9 billion people, creating demand for protein that is much higher than it is today. To nourish society as a whole, U.S. soy, in concert with animal agriculture, plays an important role in global food security by offering a reliable supply of high-quality protein. Together, it’s a powerful source of nutrition to fuel our population and economic growth.

This week at the Borlaug Dialogue International Symposium, as part of the World Food Prize, the United Soybean Board (USB) joined the American Soybean Association (ASA), Iowa Soybean Association and World Initiative for Soy in Human Health (WISHH) to discuss U.S. soy’s commitment to global food security. A major part of nourishing our global society is prioritizing protein on everybody’s plate. Whether it’s animal or plant protein, high-quality and nutrient-dense protein works better collaboratively than it does separately.

“In the grand scheme of things, when all proteins are part of a balanced diet and work collaboratively to nourish the world, everyone wins,” said Polly Ruhland, USB CEO. “Collaboration between animal- and plant-based proteins bolsters our ability to serve our shared global protein market. Together we can answer the many critical challenges facing our world: nourished versus malnourished, environmental improvement versus degradation, confident customers versus doubtful ones.”

In addition to animal protein, U.S. soy will be pivotal to these efforts. Soy as a complete plant protein, containing an adequate proportion of each of the nine essential amino acids necessary in the human diet, serves not only as a primary source for high-quality animal feed, but also a growing direct source of protein for people.

“Thanks to the visionary soybean farmers who founded WISHH 20 years ago, U.S. soybean growers have real-world experience in connecting trade and development in Africa, Asia and Central America,” said Liz Hare, WISHH executive director. “Together with our strategic partners, we ensure that more protein reaches these growing populations through nutritious and delicious foods ranging from soy inside tortillas and bread to feed for fish, poultry and livestock.”

U.S. soybean farmers play a critical role in providing a sustainable protein with the growing population. As a pledge of stewardship to the air, water and soil, farmers representing USB, ASA and U.S. Soybean Export Council (USSEC) committed to goals for improvements on four key metrics between 2000 and 2025. These goals include a reduction in soil erosion by 25%, as noted in the Soybean Sustainability Assurance Protocol, in addition to improvements related to greenhouse gas emissions, land use and energy use.

"Our commitment to feed the world in a nutritious and sustainable manner is taken very seriously and is of intrinsic importance to all U.S. soybean farmers,” said John Heisdorffer, ASA chairman and Iowa farmer. “Soy is part of the larger solution to nourish our population.”