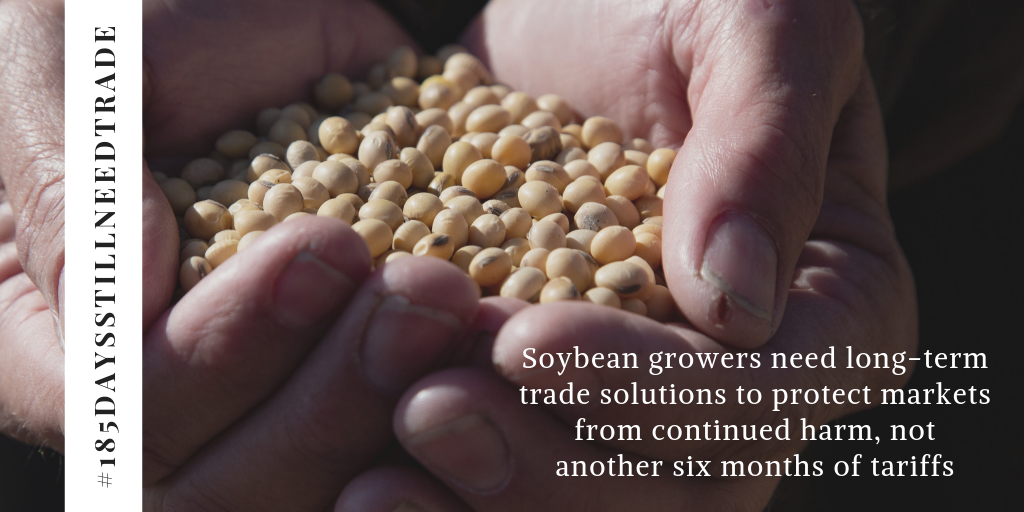 It has been a full six months since China retaliated against President Trump’s 25 percent tariff on $34 billion worth of Chinese goods. That tariff, which took effect July 6, 2018, has rocked the foundation of a decades-old trade relationship U.S. soybean farmers built with China, the largest market for American beans. And, it has resulted in halted sales, plummeting crop prices, and a lack of security for farmers seeking funding for the 2019 season.

Davie Stephens, a soybean grower from Clinton, Ky., and American Soybean Association (ASA) president stated, “We are anxious to see real progress to end this trade war quickly. With Ambassador Gregg Doud of the Office of U.S. Trade Representative (USTR) and Under Secretary Ted McKinney of the United States Department of Agriculture (USDA) among the delegation in China to discuss trade today, we are hopeful that real progress is forthcoming.” Stephens continued, “This has been a long and costly half year for farmers, and we need stability returned to this market. We cannot withstand another six months.”

The value of U.S. soybean exports to China has grown 26-fold in 10 years, from $414 million in 1996 to $14 billion in 2017. China imported 31 percent of U.S. production in 2017, equal to 60 percent of total U.S exports and nearly one in every three rows of harvested beans. Over the next 10 years, Chinese demand for soybeans is expected to account for most of the growth in global soybean trade, making it a prime market for the U.S. and other countries.

U.S. soybean growers have realized a nearly 20 percent drop in soy prices since the threat of tariffs began last summer, and the future of soy growers’ relationship with China continues to be in jeopardy. China has pursued new means to procure soybeans and other protein crops, including maximizing soybean imports from other exporting countries, particularly Brazil.

Growers have taken to Twitter and other social platforms today with the hashtag #185DaysStillNeedTrade, along with the popular #RescindtheTariffs hashtag to continue demanding that the Administration bring an end to its lingering trade war with China and help restore certainty and stability to the soy industry.