Production agriculture is an asset-intensive sector. According to USDA Economic Research data, the projected five-year average return on assets (ROA) is 2.78%. For comparison, the median five-year average ROA for the S&P 500 is 7.96%. This indicates that the typical S&P 500 firm requires about 1/3 of the assets as a farm to generate similar profits on a standardized basis. As a result of this, taxes that are based on asset valuation can be significant for agricultural producers, which makes stepped-up basis important for them.

While a $501,600 or greater bracket may seem like a high threshold to reach the 20% tax rate, remember that farming is asset intensive. Consider the simple example of a married couple living in Illinois filing jointly with a household income of $80,000. According to USDA National Agricultural Statistics Service (NASS) data, if they bought cropland in 1997 and sold it in 2020 (the first and last years in the dataset), they would hit the 20% bracket with 81 acres of land.

Stepped-up basis provides a reset for the basis during intergenerational transfers. In effect, after the asset owner is deceased and the assets transfer to the heirs, the basis is reset to the market value at the date of death. The stepped-up basis only allows taxes to be levied on gains realized by the individual during his or her ownership, not on gains realized prior to the individual possessing the assets. If the heirs sell the property, they will be responsible for the taxes on the capital gains accrued during their ownership.

One of the issues created by the capital gains tax without the stepped-up basis is that of market inefficiencies. The capital gains tax is incurred when the asset is sold. Therefore, the supply curve for assets is shifted backward with the tax, which reduces the amount of supply available at any given price. Four things happen with this change: 1) sellers net less value from the sale than before the tax, 2) buyers must pay more, 3) the government realizes the tax as income, and 4) society realizes a net loss in overall welfare. The exact amounts of each of the components depend upon the responsiveness of sellers and buyers to prices.

The tax wedge that would be amplified without stepped-up basis between buyers and sellers is exacerbated by the run-up in land prices. According to USDA ERS data, real estate composed 82% of farm assets in 2020. USDA NASS reports cropland values back to 1997 at which the U.S. average price was $1,270 per acre and has increased to $4,100 in 2020. If the average U.S. farmer purchased land in 1997 and died in 2020, at which point his or her heirs sold the land to another farmer, the heirs would owe capital gains tax on the difference ($2,830). The farmer purchasing the cropland in 2020 could face up to an extra $566 per acre without stepped-up basis. While the capital gains tax would be paid by the heirs, some of it would be passed on to the buyer, the amount depending on the marginal tax rates and the responsiveness of the buyers and sellers to prices. 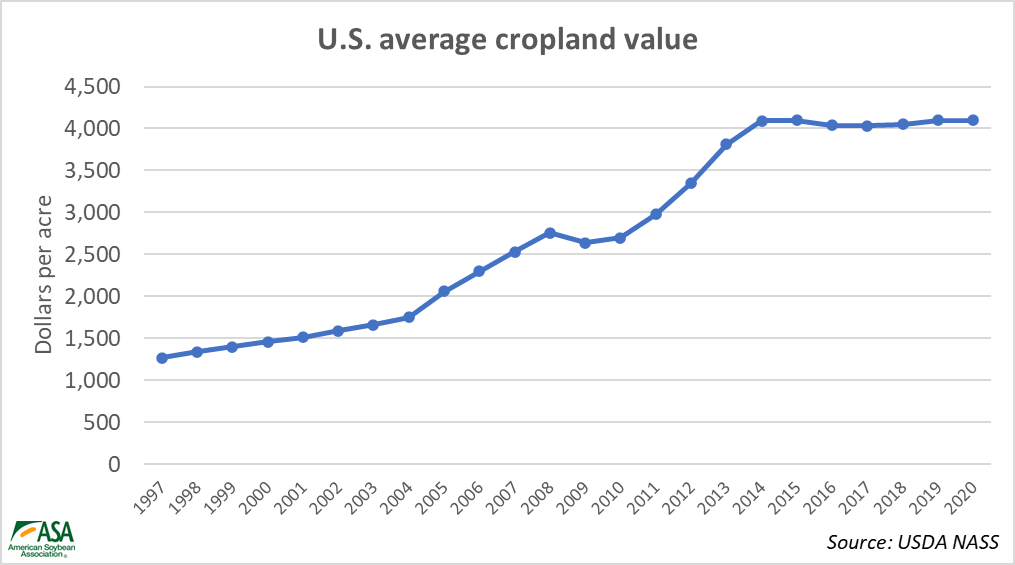 One way to put the potential effect of removing stepped-up basis into perspective is to compare the potential capital gains tax on land to rental income from the land (Figure 2). Dividing the potential capital gains tax for an acre by the annual cash rent provides an estimate of how long it would take to offset the loss of stepped-up basis if the capital gains tax were fully incorporated into the land price. The number of years varies by state but is 4.1 for the U.S. average. States with more urban influences tend to take longer due to land values rising much faster than cash rental rates, as non-agricultural uses drive up the land prices. In the center of the country, the range extends from about three years to six years. 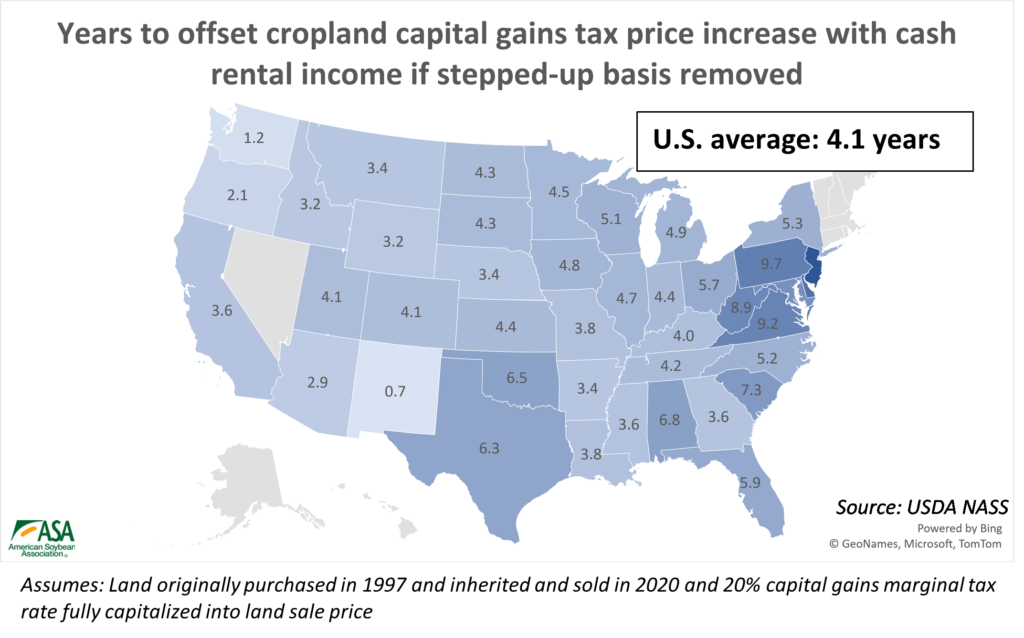 Agriculture is an asset-intensive sector. Much of the value of the assets is in real estate, as land is a necessary component of production. Removing stepped-up basis can leave heirs with a large tax bill when they sell the property. This disincentive to bring land to market increases land costs. At the national level, it may take up to four years to offset the higher land costs if the stepped-up basis adjustment was removed.