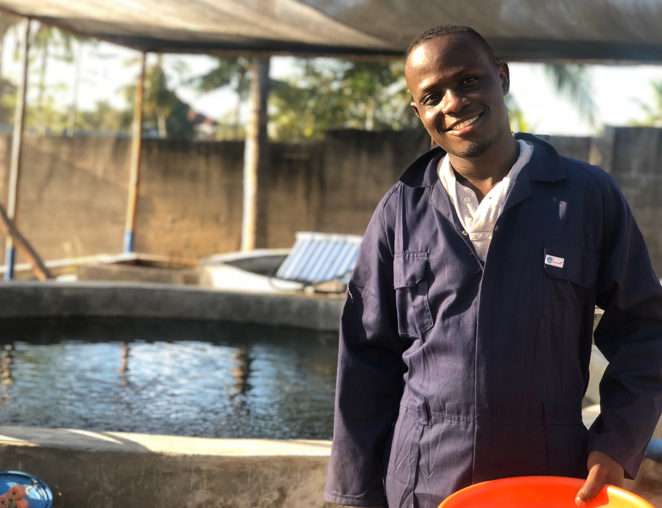 As his business grows, Jerry Mang’ena is looking to build on its success by working with other young entrepreneurs and sharing his story on social media.

Jerry Mang’ena founded Aqua Farms Organization to respond to food security issues in Tanzania and Africa. He later funded Aqua-Farms Hatcheries to support the 20 million fish seed gap in his country. Since founding his company in 2016, Jerry estimates Aqua Farms is now producing 1.2 million fingerlings per year, roughly 10% of Tanzania’s fingerling production. With plans to grow even larger, Mang’ena’ is not stopping there.

Aqua Farms is a science-based company led by youth. The 27-year- old Mang’ena states his belief that the best way to increase production across the continent is to reach younger leaders. He believes young people like the ones at his company will fuel the future of aquaculture development and soy trade in the developing world. He has lofty goals to reach more people across Africa and tell them about the success of Aqua Farms as well as inspire them to take action on solving hunger issues. Through WISHH and his own innovative spirit, he’s doing just that.

“I want to inspire other Tanzanians and Africans to let them know about this work,” Mang’ena says. “[Young people] will be the ones to respond to food security issues.”

Mang’ena began his relationship with WISHH when the organization supported his attendance to virtual training events with aquaculture experts. Through the U.S. Department of Agriculture’s Foreign Market Development (FMD) and Agricultural Trade Promotion (ATP) programs, Mang’ena learned from professors at Texas A&M through the university’s Aquaculture Feed Extrusion, Nutrition & Feed Management Course. A tutor himself at the University of Dar es Salaam, he credits his training as formative in his success today.

“All of this started because of the U.S. State Department’s Mandela Washington Fellowship Program, Mang’ena explains. “I met professor Amrit Bart at University of Georgia who understood my ideas to build the best hatcheries program in Tanzania. He referred me to WISHH, and that connection has really helped me in key areas.”

Mang’ena is quick to recite three mains ways that WISHH has supported him: international connections to other entrepreneurs, technical support, and trainings.

“I have been able to connect to and learn from other farms in both Tanzania and Africa,” says the budding entrepreneur. “Also, through technical support from WISHH, I’ve been able to boost my hiring practices, and even learned a lot of about fish lifecycle resilience.”

“The trainings have been helpful as well,” Mang’ena continues. “The WISHH trainings helped my employees truly understand aquaculture feeds, like the value of soy protein for hatcheries.”

Mang’ena also notes that the support WISHH has provided has allowed him to double the size of his employees while still focusing on a youth component.

Now, the future for Mang’ena is working with young people to both inspire and learn from them. Young entrepreneurs like WISHH strategic partner Evans Danso, the CEO of Flossel Farms in Ghana, are part of the international connections Mang’ena has fostered through WISHH. Danso told Mang’ena about WISHH’s October 2021 aquaculture training at his farm in Ghana. Now Mang’ena is sending a member of his team to the training with WISHH supporting expenses through ATP and MAP funding.

Mang’ena’s outreach is on roll. He figured out an innovative method to reach other entrepreneurs and members of the aquaculture community through social media app Clubhouse.

“I’ve used Clubhouse to promote the work being done around aquaculture in Africa. Also, it’s about teaching and sharing,” Mang’ena explains. “I realized conversations in this space were happening interactively, and we all can learn from each other.”

Mang’ena started and joined aquaculture conversations on the digital space. There, he fostered conversations around feeds, challenges, and future opportunities in food security. Mang’ena was eventually noticed by Marine Diaries, a U.K.-based ocean science and conservation nonprofit. The organization asked him to speak to its international audience on the work he does in aquaculture. He loves the idea of sharing his knowledge with others, and credits WISHH for boosting his business and expertise.

According to the Food and Agriculture Organization of the United Nations, aquaculture is the fastest-growing segment of the feed industry, with production expected to grow to 109 million metric tons by 2030, an increase of 32% compared with 2018. FAO’s State of World Fisheries and Aquaculture 2020 states, “Aquaculture has already demonstrated its crucial role in global food security, with its production growing at 7.5% per year since 1970. The priority should be to further develop aquaculture in Africa and in other regions where population growth will challenge food systems most.”

Clearly, young aquaculturalists like Mang’ena are vital to catching this future potential.  As for Mang’ena, he plans to continue to use social media to broadcast his work with WISHH.

“I want to continue to work with WISHH to create a reliable supply chain for feed in aquaculture,” Mang’ena says. “I plan on expanding my outreach to other parts of Tanzania and around the Great Lakes Region in Africa.”

WISHH is a program of the American Soybean Association and is funded in part by the United Soybean Board and state soybean board checkoff programs.