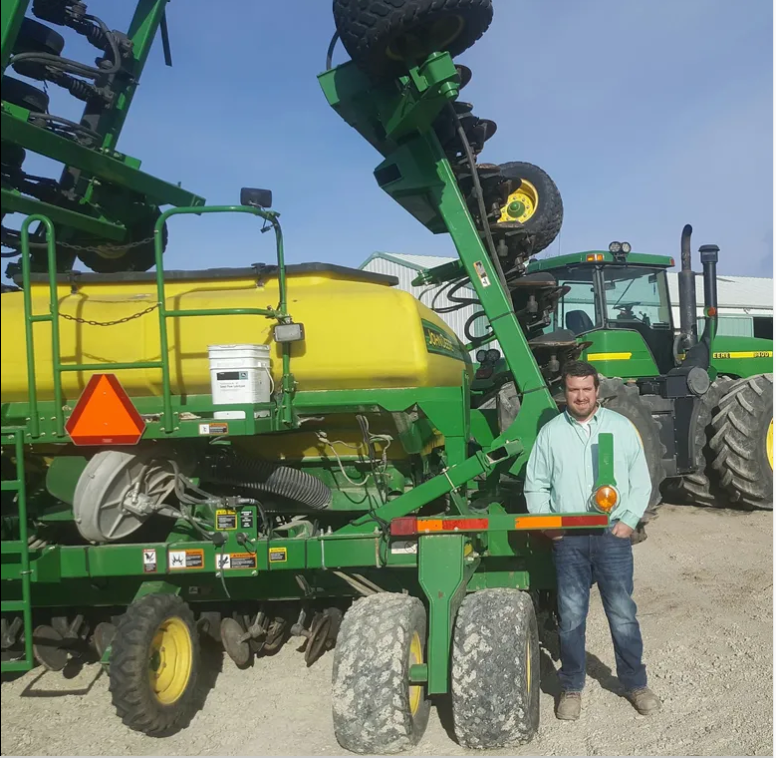 Rusty Kordick was planting soybeans around a terrace in an Iowa field in 2015 when he realized he only needed to plant two more rows. The problem was he had 17 rows on his planter.

The rural Iowa farm equipment salesman was helping a customer with fieldwork and was bothered by the amount of overlap and seed waste the planter created.

So, he did something about it.

Kordick invented an electric, GPS-enabled manifold, now known as the IntelliDrive system, which tamps down and eliminates skips and overlaps that are unavoidable in mechanical seeders and box drills. The result: lower seed costs and better yield potential.

“After helping with that planting, I started looking at some of my south-central Iowa farmer customers’ planting maps versus harvest maps and noticed about 10-12 percent overlap,” said Kordick, who is based in Prole, Iowa. “I really wanted to help eliminate the problem.”

Jason Myli, sales manager at Bodensteiner Implement Co., Cresco, Iowa, was not surprised. Myli hired Kordick as an account manager about a decade ago at the Indianola location of what was then Barker Implements and what is now Agrivision Equipment Group.

“He was immediately a very energetic individual, very dedicated. He has a passion for production agriculture and the producers who make up production agriculture, and that passion and those producers made him so strong as an account manager,” Myli said. “We always had a gap in the air seeder tech to have individual section control. He recognized that and, through his relationships, was able to connect with the right guy to come up with a solution.”

Kordick, who has a degree in business, joined up with friend Ryan Hanrahan to devise the answer. Another friend, engineer Justin Kean, also played a role in the project. While Kordick did not grow up on a farm, he helped his father in a rural construction business and worked for a construction equipment dealership before going to work at the John Deere dealership. Hanrahan had a building on his property where they were able to fabricate the invention.

The innovators worked with custom and traditional equipment parts to develop a prototype. The concept was entered in the 2016 University of Iowa Venture School competition, a program that assists startup companies with launching inventions and ideas. The manifold won first place. Shortly after, Kordick filed a patent pending and was awarded the patent in April 2019.

“The prototype eventually became a production model we were able to successfully test and even begin selling to area farmers,” Kordick said. His company, Ag Manufacturing & Technology (AMT), is a precision ag technology and equipment company that sells the IntelliDrive system through the John Deere dealer network for use on John Deere 1690/1990 air seeders.

“It was a learning curve to go from selling tractors to taking a new product from conception to commercialization,” he added. “We worked through some production hiccups during the 2017 season and rolled out the system with good results in 2018. IntelliDrive was used on 1 million acres in 2019 and now can be found in 15 states and two Canadian provinces.”

Again, Myli is not surprised. “From what I’ve always seen, he’s committed not to the sale but to the result, and he’s always delivered exceptional results,” he said. “He’s what our ag industry needs. A lot of guys sell a product and walk away. Rusty saw an opportunity, a need in the ag industry. I would tell you the passion is more for helping the producers than helping himself. That was always how it was when I was working with him. And as a result, he had a good following.”

Kordick’s knowledge of equipment also has been instrumental to his success. “He’s one of those people who could sell a combine or a seeder and then go out and start the combine up, set it, calibrate the seeder, optimize it and make sure it was optimized to be the best quality combine and seeder,” Myli said. “Not a lot of guys, in reality, can get out and use the machinery they’re selling. He could show you how to run it, and that builds a lot of confidence for a customer to see an account manager go out and demonstrate the equipment in real conditions.”

So far, IntelliDrive has been exclusive to John Deere. The add-on is controlled by proprietary software that is displayed on the Deere split screen, a monitor or tablet. IntelliDrive is targeted at larger growers planting soybeans, wheat, cotton, canola, rice, hemp, peas and cover crops.

“We have found it pays for itself after planting about 1,500 acres,” Kordick said. “It is one of the few farm technology products today that has such a quick return on investment. Farmers have instantly found they can save money by not using as much seed and by seeing better yields.”

Several early adopters were willing to try out the system in 2017, which Kordick said led to more sales the following year. He was amazed word-of-mouth support prompted neighbors of first users to buy IntelliDrive right away once they knew the savings it could provide.

“Farmers share with each other how they can save on seed and input costs. The technology is very dependable and reliable for variable rate seed control,” he said. “The key to farming is taking equipment you own and maximizing it to its fullest potential. That’s what we do.”

Now Kordick has eyes on expansion. He will adapt the IntelliDrive system to work with Case IH and New Holland air seeders next. He also started selling the system for use with larger John Deere commodity carts in Canada that cover more acres with one-pass seed and fertilizer. The next-generation manifold, IntelliDrive PLUS, is used with John Deere 1900/1910 commodity carts and promises farmers a short return on investment with cost reductions up to 20%.

“Our current distribution area runs from Nebraska to Delaware and from Canada into Tennessee. We hope to move into the Southeast and Delta for not only soybeans, but also hemp, cotton and rice,” Kordick said. More information can be found at intellidriveusa.com.