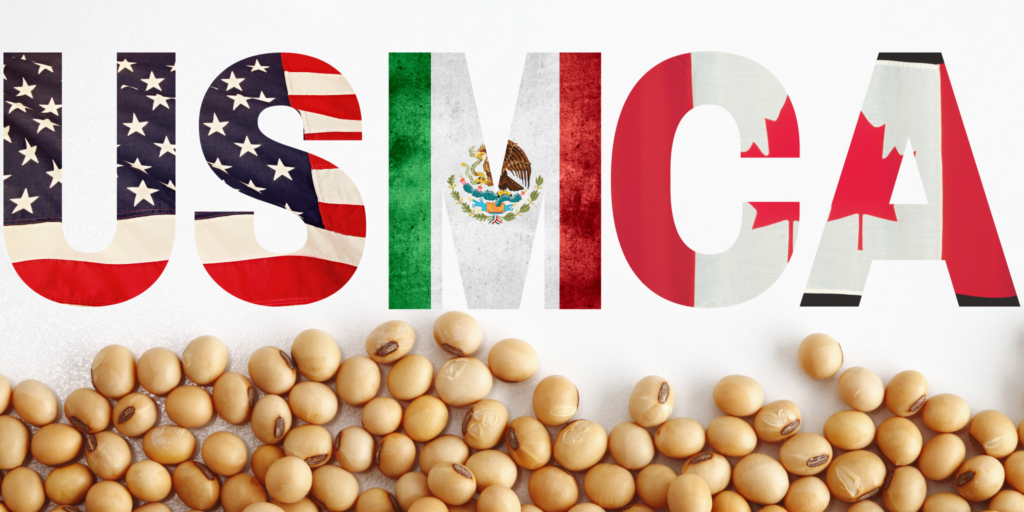 Soybean growers saw an action-packed start to 2020 in the trade arena with longtime priorities around the United States-Mexico-Canada Agreement (USMCA) and China taking the forefront.

USMCA was ratified with strong bipartisan support from both the U.S. House of Representatives and the U.S. Senate—the House in Dec. 2019 and Senate early Jan. 2020—and was signed into law by President Trump on Jan. 29. The successful passage of USMCA through both Chambers of Congress and the White House concludes over three years of advocacy by ASA to see trade certainty with Mexico and Canada restored. The signing of USMCA ensures soybean growers will maintain access to two of their top markets. The deal is expected to take effect once all three countries have ratified the agreement.

Mexico is the #2 market for whole beans, meal and oil, and Canada is the #4 buyer of meal and #7 buyer of oil for U.S. soybean farmers, making the trade agreement essential to sustaining the growth realized in those two countries under the North American Free Trade Agreement (NAFTA).

In December, the Administration announced it had reached what it was calling a “Phase One” agreement between the U.S. and China that would include reduced barriers to trade across a variety of sectors, as well as commitments by China to purchase a substantial amount of U.S. goods including agricultural products. However, the content of the agreement was not fully known until Jan. 15, 2020, when President Trump and China officially signed the initial deal.

Soybean growers who have long advocated for a negotiated solution between the U.S. and China were pleased to have reached a Phase One agreement that could deescalate the tariff war that has been negatively affecting the agriculture economy and soybean growers for the last two years.

The Phase One agreement offers resolution to non-tariff barriers including promising language on agriculture biotechnology, sanitary and phytosanitary issues, and intellectual property rights, among other areas. China agreed to implement a transparent, predictable, efficient, science- and risk-based regulatory process for the evaluation and authorization of agricultural biotechnology products. This language has the potential to significantly reduce the time it takes to reach approval of new traits in China, thereby allowing U.S. farmers to utilize traits that help combat a host of challenges.

The agreement also makes broad commitments by China to purchase an additional $200 billion worth of U.S. goods over two years in the areas of agriculture, manufacturing, energy, services and goods. The agricultural purchases component of the agreement committed China to purchasing $80 billion worth of U.S. agricultural products in that time period. Under this agreement, China has committed to purchase an additional $32 billion ($12.5 billion in 2020, $19.5 billion in 2021) in agriculture products above the 2017 baseline of $24 billion. While it is unknown what portion soybean purchases will comprise of the overall number, soybean growers are hopeful these commitments will help get them back to pre-2018 export levels.

Despite the advances in the Phase One deal, soybean growers remain concerned that it does not include an official commitment by China to remove the harmful retaliatory tariff on U.S. soybeans. ASA urges the U.S. and China to include full removal of agriculture tariffs immediately.