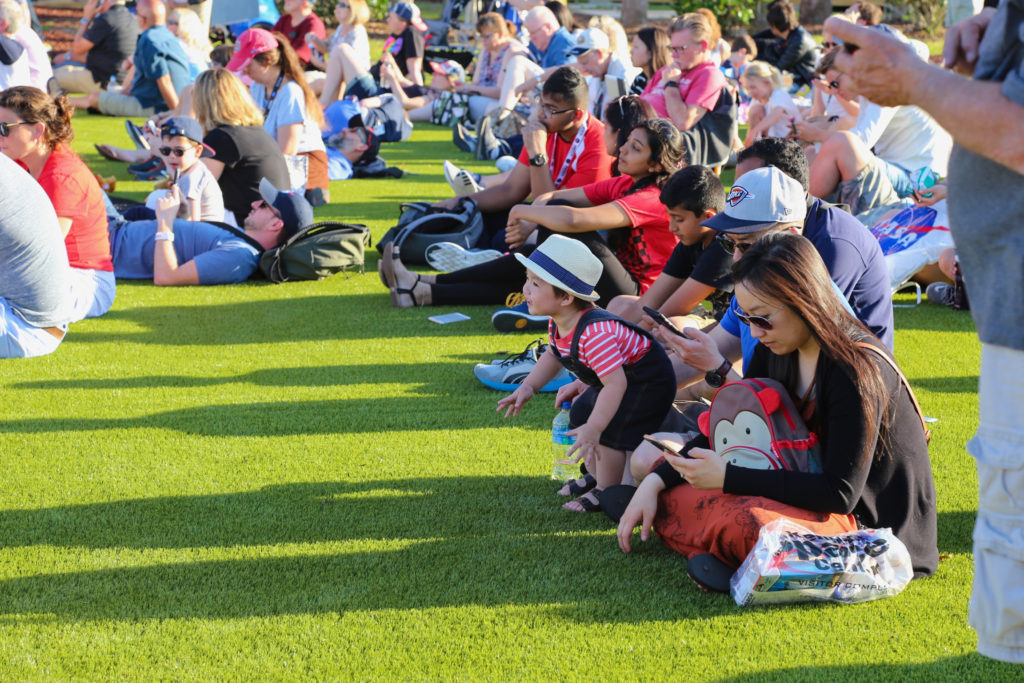 Soy-backed artificial grass from SYNLawn is strong enough to handle the crowds at the Kennedy Space Center Visitor Complex in Florida. The product benefits from soy’s performance and sustainability. Photo courtesy of SYNLawn

For example, the SYNLawn company’s soy-backed artificial grass now covers commercial and residential spaces ranging from Kennedy Space Center to the 6,300-square feet of yard and putting green at financial guru Suze Orman’s vacation home. Soybean growers who come to Washington, D.C. this summer can join hundreds of families and architects who will stand on SYNLawn grass in a massive multi-story exhibit at the National Building Museum. SYNLawn also exports its soy-backed product from a state-of-the-art manufacturing plant in Georgia.

Soybean oil is an abundant and quality ingredient, offering performance as well as renewable content for innovation in roads, too. “We believe it’s time for the asphalt industry to look beyond recipe specifications and focus more on real-world results,” said Justin Black, global category leader, Cargill. “Investments in research and development have yielded advances in asphalt technology, but industry standards haven’t always kept pace.” Soy-based road products can be found in Minnesota, New York, Illinois and other states.

Tires rolling down the road are also driving demand for soy. A United Soybean Board-supported breakthrough with soybean oil as a replacement for petroleum oil resulted in Goodyear tires winning the prestigious Tire Technology International Award for Innovation and Excellence in the category of “Environmental Achievement of the Year” at the 2018 Tire Technology Expo in Germany.

“In a typical tire, the amount of petroleum oil is around 8 percent. In the Assurance Weather Ready, we were able to replace about 60 percent of that oil with soybean oil, which included 100 percent of the oil in the tread compound,” said Goodyear Chief Engineer, Polymer Science and Technology Robert A. Woloszynek. 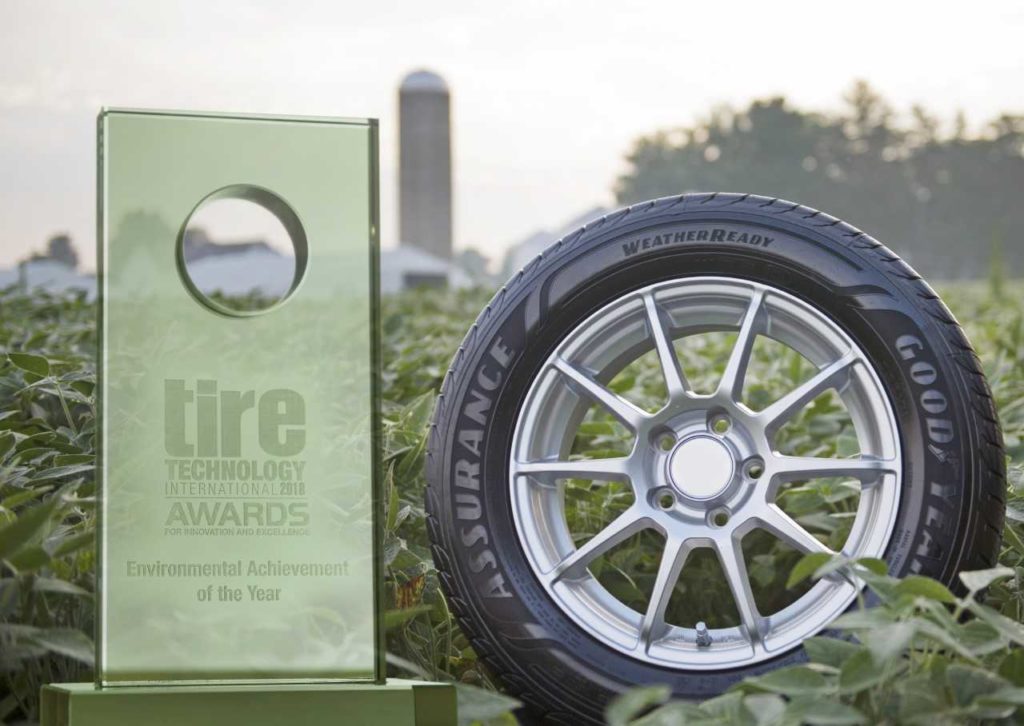 Goodyear replaced about 60 percent of oil in its Assurance Weather Ready tires with soybean oil and has expanded to offer soybean oil in Eagle Enforcer All Weathers that are designed for law enforcement pursuit vehicles. Photo courtesy of Goodyear

To help speed America’s transition to these soy-biobased products, ASA worked alongside multiple manufacturers and other stakeholders to secure Farm Bill language and funding for the Biobased Market Program.

“ASA and soybean farmers are always seeking to expand and diversify their markets, and biobased products are a natural opportunity,” said Rob Shaffer, ASA director from Illinois and chair of the Biodiesel and Infrastructure Advocacy Team. “ASA is pleased that Congress, following the noteworthy support and leadership of Senate Agriculture Committee Chairman Pat Roberts and Ranking Member Debbie Stabenow, recognized the importance of funding the Biobased Market Program.”

The Biobased Market Program (Section 9002 of the Farm Bill) is the only Farm Bill Energy Title Program to receive an increase in funding. The program will receive $3 million in mandatory funding per year for five years, for a total of $15 million.

As recommended by ASA and its fellow members of the Biobased Products Coalition, the Farm Bill elevates the Biobased Market Program to become part of the U.S. Department of Agriculture’s (USDA) Rural Development Agency (RDA). The transition to RDA creates new opportunities for USDA to work closely with the U.S. biobased manufacturing industry on mission-driven strategies to increase demand for America’s biobased products.

In this regard, the Farm Bill includes ASA-advocated language that directs USDA to establish and promote public-private partnerships for Biobased Market Program activities that increase U.S. purchasing of biobased products. Allocating funding to support public-private partnerships would allow biobased manufacturers and allied stakeholders to identify potential customers—ranging from military bases to private-sector fleets and facilities—and to design and implement effective outreach.

The Farm Bill also encourages USDA to further promote and give a preference to the procurement of agricultural biobased products within USDA’s RDA programs, including rural housing and rural electrification. These actions will expand on USDA’s current efforts that include working with federal agencies and their contractors to buy biobased products. 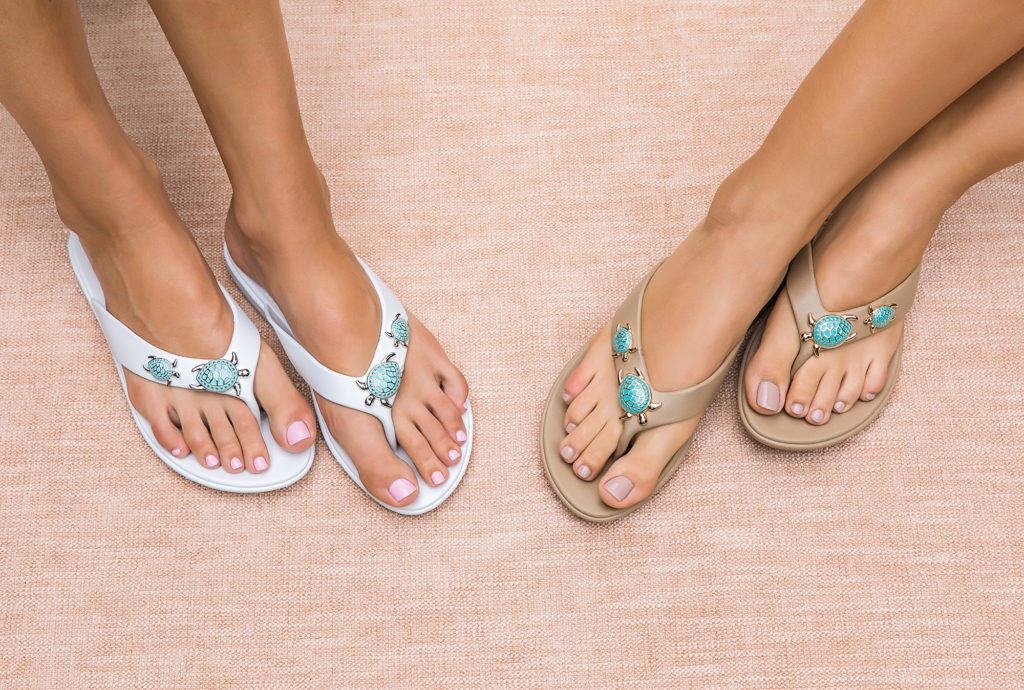 Okabashi brand sandals are 45 percent U.S. soy by weight. The company uses a soy-based compound for its shoes because soy aligns with its commitment to sustainability and manufacturing domestically. Photo courtesy of Okabashi

Soybean growers can help by using their own buying power to send market signals to manufacturers to use soy. Companies like Casey’s offering biodiesel makes it easier than ever for soybean growers to support the companies that support U.S. soy demand. Casey’s has now converted more than 590 stores to biodiesel and plans to expand the use of biodiesel to another 300 locations.

The United Soybean Board’s (USB) website, soybiobased.org, offers success stories on biobased products based on USB outreach and education to city governments and other large customers. These successes can also help soybean growers and their communities transition to soy-based products, which further builds brand loyalty for companies to use U.S. soy.

Here’s a sampling of the many choices:

Cabinets and Funeral Caskets—Columbia Forest Products has used soy in nearly 100 million panels of its formaldehyde-free PureBond® hardwood plywood found in offices and homes. One creative funeral company is even using it to meet the growing demand for “green burials.”

Carpet—Signature Accord Flooring uses soy in its backing and is a proven performer in hotels, restaurants, senior care and more.

Cleaning and Corrosion Control—Minnesota-based Cortec offers 14 products made with soy. Their soy offerings range from EcoLine® Surface industrial-grade surface cleaner and degreaser  to a general purpose lubricant to tackle everything from loosening rusty bolts to metal cutting.

Roofs—Soy-biobased product Roof Maxx reverses aging in asphalt shingles and is recognized as a USDA Certified Biobased Product in the USDA BioPreferred Program. The product has a tested biobased content of 86 percent. An application of Roof Maxx extends the life of shingles for five years and can be re-applied to extend the life of a roof for up to 15 years. The Ohio Soybean Council is working with Roof Maxx on the product’s ability to clean roofs, too.

Sandals—Made with 45 percent U.S soy by weight, Okabashi sandals are helping customers shrink their environmental footprint in style. “Here at Okabashi Brands, we made the choice to go with a soy-based compound for our shoes because it aligns with our commitment to sustainability and manufacturing domestically,” said President Kim Falkenhayn.

Vehicle Greases, Hydraulic Fluids and More—The District of Columbia Water Authority and the Port Authority of New York and New Jersey are two of the fleets that succeeded with B20, so USB helped them take the next step to additional soy-biobased products. D.C. Water’s latest successful trial is with a soy-biobased fifth-wheel grease from Iowa company Natural Soy Products.

Among the most compelling characteristics of soy are its utter versatility, and in turn, its sustainability. The “bang for the buck” in every bean is remarkable, with endless possibilities for ways to stretch the utility of each little sphere, including soy foods and even ways to support other foods.

First, soybeans are processed into soymilk. The liquid fraction is siphoned off, leaving behind the pulp, or okara. The wet okara is conveyed into a dehydration unit and dried into a shelf-stable product. The dried okara is then finely ground into a high protein, high fiber flour that is packaged and sent directly to consumers, wholesalers, foodservice outlets (restaurants, etc.), and ingredients companies.

Renewal Mill’s innovative process has earned it accolades in the food industry, including the tech and digital space. And, last fall, the company secured a research and development partnership with Cargill that could broaden the visibility and appeal of its ingredients to food manufacturers. Renewal Mill’s flour line is available to consumers online, along with its own chocolate chip cookies, at renewalmill.com.

Hodo Foods, the organic soy brand that sells tofu to major grocery chains including Whole Foods, big box stores like Target, and fine chefs, sells a fraction of the pulp it has left over from processing its tofu—made by curdling soy milk—to Renewal Mill. Every pound of soy milk produces an equal amount of wet pulp, which is a lot of pulp to repurpose. Hodo traditionally has stored and shipped all of its byproduct to dairies and other outlets for use in animal food.

Another soy reuse finding traction among food industry innovators is using okara from Hodo and other processors for growing mushrooms, from oysters to shitakes. Back to the Roots, started by two Berkeley grads, sells mushroom growing kits in more than 250 Whole Foods nationwide and, among other companies, is a regular repurposer of Hodo okara. Essentially, the okara is used in a “sawmill” blend that provides a nutritious ground base in which the fungi are grown.