Next Generation Scientists for Biodiesel (NGSB) are frontrunners in research that can yield new opportunities for soybean farmers and biodiesel producers alike.

Pennycress, a plant in the mustard family, is named and sometimes grown for its round seedpods. Field pennycress is primarily a winter annual weed of winter small grains, which is where its potential connection to soy comes in. Zenith Tandukar’s pennycress research at the University of Minnesota offers an opportunity to complement soybean production with an oil-producing cover crop that can also serve as a cash crop. 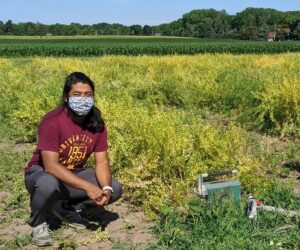 Zenith Tandukar, Co-chair of Next Generation Scientists for Biodiesel

Meanwhile, at the State University of New York College of Environmental Science and Forestry, Jenny Frank’s research quantifies the impacts of investing early in biodiesel and renewable diesel versus waiting five years and investing in an immature battery-electric pathway.

Frank and Tandukar, both Ph.D. students, are two of the four new co-chairs selected to lead the NGSB, a National Biodiesel Board- and United Soybean Board-supported program for college-level science students. NGSB fosters professional relationships between budding and established scientists, shares accurate information, and increases collaboration between academia and the biodiesel industry. 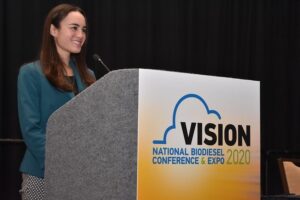 Jenny Frank, Co-chair of Next Generation Scientists for Biodiesel

Tandukar’s research focuses on domesticating and breeding pennycress into a major oilseed crop—and a potential source of biodiesel and jet fuels.

“Through my research, we will identify ways of increasing oil production by gaining an understanding of the genetic basis of oil content and seed size in pennycress,” he says. “Increasing seed size and oil content can improve seed handling, crushing efficiency, and increase farmer and industry profits in the long term. Clearly, the demand for plant-based biofuels is on the rise, and these demands can be fulfilled with current sources like soybeans and corn as feedstock, but also supplemented by new sources of feedstock like pennycress.”

Frank conducts techno-economic analyses for renewable energy pathways, quantifying the technical and financial feasibility of different technologies and feedstocks, including biomass-based diesel (biodiesel and renewable diesel), in class 8 heavy-duty trucks. Her results find that when compared to battery-electric as a pathway to decarbonization, the biomass-based diesel pathway achieves the largest 20-year net present value.

“To reduce the probability of catastrophic climate change, the world economy needs to quickly decarbonize, and biodiesel is a promising piece of the solution,” explains Frank.

“I think biodiesel is a particularly interesting fuel system, as it is a mature carbon abatement pathway that yields greenhouse gas emissions reductions as opposed to standard petroleum diesel.”

The two other new NGSB co-chairs are: