The Global Rise of Protein: U.S. Soy’s Growth Through the Next Decade 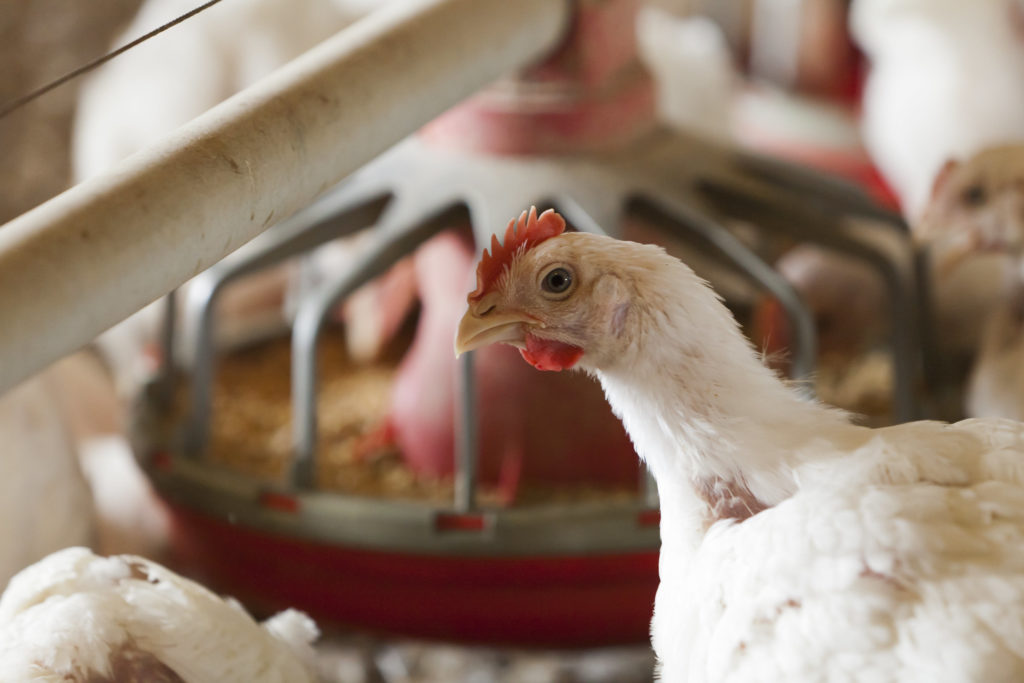 Whether you’re focused on keto, Whole 30® or you’re just a regular ole steak-and-potato-eating, red-blooded American, your nutrition depends on protein.

And as the world’s population continues to grow, healthy demand for all protein will remain front and center in food conversations and on kitchen tables. In fact, all signs point to significant growth in protein demand, a trajectory already occurring over the last decade and predicted to continue through 2030. This added demand for meat, poultry, fish and other protein sources in the next 10 years puts U.S. soybean growers in a great position to be a preferred provider at home and abroad.

While populations depend on protein to build muscle, repair tissue, build hormones and enzymes, and make antibodies, the global food production system relies on soy to be a consistent source of protein. Every bushel of soybeans comes packed with this nutrient-dense essential. Soy is already a leading protein source for animal feed because of its favorable composition of amino acids. Livestock and poultry have long driven soy’s demand and subsequent expansion globally. But, as an aside, the favorable composition and all its attributes apply to human diets, as well. Soy provides the only plant-based protein with all nine essential amino acids—or the ones our bodies don’t produce naturally.

“Protein plays an essential role in global nutrition, regardless if it’s animal- or plant-based consumption,” said Keenan McRoberts, vice president of meal strategy for the United Soybean Board. “All sources of protein need to be at the table to feed the rising population in a sustainable manner, and U.S. soy is committed to meeting those needs in both animal agriculture and with partners in the plant space.”

Arby’s was onto something in 2014 when they switched their slogan to “We have the meats.®” Americans still strongly prefer the taste of meat. Poultry and red meat consumption continue to rise. Fact: Americans are projected to eat 225.6 lbs. per capita in 2020. According to the U.S. Department of agriculture, that’s a 6 lb. per capita annual increase compared to 15 short years ago.

The soybean industry hasn’t just seen an increase in total volume, but an increase in the percent of the feed ration going to soybean meal, as well. As consumer preferences push for changes from the poultry industry, soybeans are filling a gap. McRoberts said there are several factors contributing to an increased percentage of soy in a broiler ration.
“We’re seeing soybeans make a very strong case in broiler diets, especially as there is a bigger push for vegetarian-fed and antibiotic-free meat on the consumer front,” he said. “Poultry producers need an ingredient that promotes health and growth, and soybean meal can deliver on both of those fronts.” 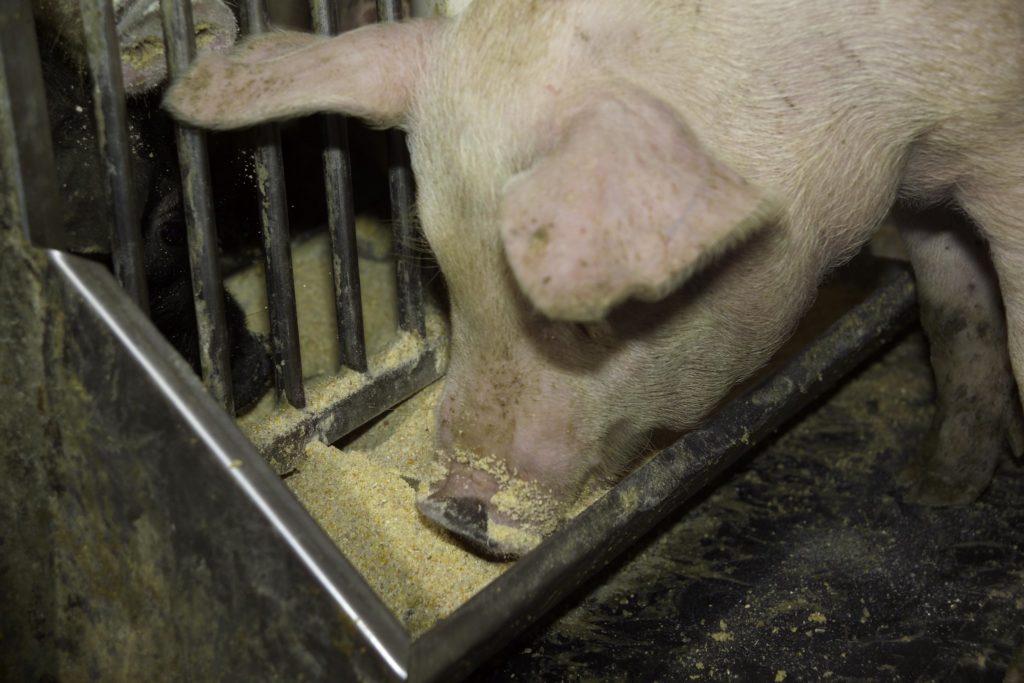 According to recent research, soy possesses between 105% and 121% energy value compared to corn, making a significant case for soy’s presence in swine diets. Photo Credit: United Soybean Board

Challenges still exist in the poultry and livestock industries when it comes to competitive feedstocks within the United States. The top threats to U.S. soybean demand are distiller's dried grains with solubles, or DDGS, and synthetic amino acids. With those alternatives for feed come myths surrounding energy and amino acids that the soybean industry must overcome.

Soybeans remain a critical ingredient in swine diets. However, soybeans have lost some footing in recent years when examining the share of the diet represented. DDGS, as a by-product of ethanol production, create a cheap energy source for pork diets and have made a dent in the amount of soy included per ration. However, that trend could be changing, thanks in part to some research funded by the soy checkoff and conducted at Kansas State University (KSU).

Preliminary data from the study showed that soy has a much higher energy content in pork diets than originally assumed, making the case for using higher quantities of soy to deliver better feed efficiency. Bob Goodband, the KSU researcher overseeing the study, said in a press release that, historically, soy has been thought to hold 78% of the energy value that corn does. However, Goodband’s research found soy to possess between 105% and 121% energy value compared to corn, making a significant case for soy’s presence in swine diets.

“Our findings will allow nutritionists to have a better understanding of the energy content of the complete diet, and therefore make the appropriate adjustments to the other nutrients in the diet,” Goodband said. “This will hopefully be a potential benefit for producers by making pigs more efficient. Now that we know exactly how much energy is in soybean meal, we can adjust our diets accordingly and hopefully see improvements in gain and efficiency.”

Outside of energy, soybeans also have other benefits to health in swine diets. In fact, soy isoflavones—which originally were documented as showing positive health impacts in humans—create positive results for pigs experiencing sickness, as well. Soy isn’t just another protein alternative, according to Dr. Dean Boyd, a technical director and nutritionist who worked for the Hanor Company: There’s an opportunity to promote its recently-discovered health benefits in livestock, as well.

“When pigs are undergoing flu symptoms or challenges like Haemophilus parasuis (a bacterial infection also known as Glasser’s Disease), we found that using high levels of synthetic amino acids does not work in that case,” Boyd said. “Using a higher level of soybean meal is more costly upfront but actually gives a better outcome resulting in better cost gain.”

While both Boyd’s research and the KSU study are relatively new, they both shed light on positive selling points to put U.S. soy into conversations regarding animal feed in the U.S. and worldwide. 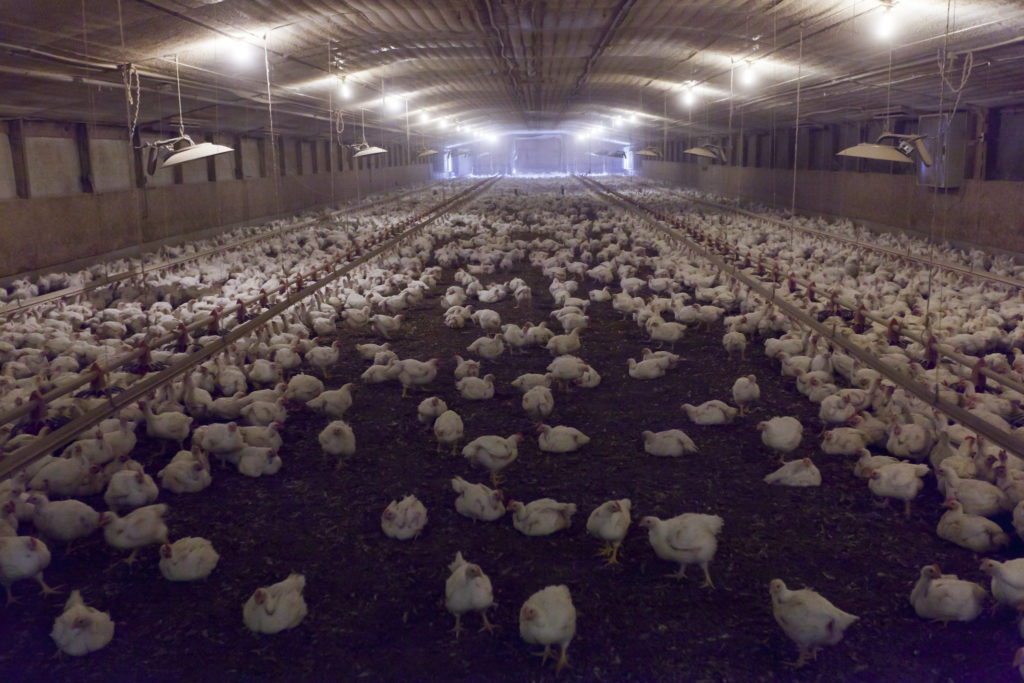 Some of the biggest increases in consumption of U.S. soy over the past few years have been in Egypt and Pakistan broiler rations. Photo Credit: United Soybean Board

The popularity of soy as a feed ingredient isn’t limited to the borders of the United States, and neither is the rise of meat consumption. Pork and poultry are both on the rise as the global population continues to push toward 9 billion people. Developing countries show the biggest opportunity for growth for U.S. soy--both direct to humans and as an animal feed source. Their populations are growing, but also their appetite for animal-based protein. Similar to trends seen in China years ago, other developing countries are showing promise for markets for U.S. soy and meat.

“As economies start to come online, poultry is the first animal protein to see growth because it’s a more affordable protein,” added USB’s McRoberts. “Some of the biggest increases we’ve seen in consumption of U.S. soy, in light of trade challenges with China, have been in Egypt and Pakistan. Those increases are going into broiler rations, so the growth is definitely happening on the poultry side.”

The U.S. soy industry approaches these markets in a number of ways to help differentiate U.S. soy from the competition. On a global scale, the competition isn’t just DDGS and synthetic amino acids. Rather, U.S. soy is competing with other soybean-sourcing countries, including Brazil.

The U.S. soybean industry works through organizations like the U.S. Soybean Export Council (USSEC) and ASA’s World Initiative for Soy in Human Health (WISHH) to build relationships, provide networking and connect members of the value chain, ultimately helping to create long term demand for U.S. soy in developing and emerging markets. These organizations provide soybean growers with the opportunity to differentiate U.S. soy and create partnerships built on trust and reliability.
While principles from the United States help with guiding success in other countries, these organizations work hard to customize their approach for each region and allow for nuances found both in local governments and local consumer preferences. Meeting customers where they are on the path to purchase of U.S. soy can help set U.S. soybean growers up for success in the future.

Whether increasing the amount of soy found in rations in the U.S. or creating a preference for U.S. soy around the world, there are consistent advantages U.S. soy protein boasts to its customers. The exceptional composition is one aspect of that advantage; the other attributes rely, positively, on soybean growers’ ability to provide a consistent supply, a commitment to sustainability and a dedication to innovating beyond just increased yields.

The protein market for U.S. soy has much promise in front of it. While not everyone will go keto, populations around the world will continue to close the protein gap in diets. And, U.S. soy is positioned well to be part of the solution.

While opportunities are growing worldwide for protein demand, the animal protein world is not without its challenges. The U.S. soybean industry relies heavily on strong pork and poultry industries in the U.S. and abroad.
Here is a breakdown of key happenings that impact the future of the meat industry:

• Trade: It’s no secret that the U.S. soybean industry depends on trade. U.S. animal agriculture does, as well. Uncertainty in trade policies can impact demand for pork and poultry in the United States. While trade with China, Canada and Mexico were all hot button issues for soybean farmers during 2019, the pork and poultry industries were also feeling the pressure. In fact, Canada and Mexico made up 40% of pork exports in 2018—a trend that the U.S. pork industry would like to see continue moving into the future. Chinese imports have been a mixed bag. U.S. pork exports to China—due to African Swine Fever—have increased steadily over the last 12 months. While China’s appetite for poultry is also increasing, the demand is driving increased production more so in Thailand and Brazil due to ongoing issues with Avian influenza.

• Nuisance Lawsuits: Nuisance lawsuits have been rearing their head for the U.S. meat and poultry industries. North Carolina saw an influx in nuisance lawsuits in the last several years, with Smithfield-owned Murphy Brown being the biggest target. These lawsuits took on larger issues than past nuisance lawsuits, including claims related to health, fear of future illness and other ailments more closely aligned with personal-injury law. The suits were not one-off claims between neighbors but included multiple plaintiffs against Murphy Brown. In fact, several lawsuits combined to have more than 500 plaintiffs. This approach to lawsuits has challenged those within major livestock and poultry producing states to reexamine their state’s “Right to Farm” laws and plan for potential crises related to these types of initiatives in the future.

• African Swine Fever: African Swine Fever (ASF) is a deadly animal disease affecting pigs and wild boars in at least 11 countries, including China, Vietnam, the Philippines and Korea—all Top 10 Pork producing countries. According to the USDA’s Foreign Agricultural Service, ASF has likely impacted China more than any other country. Their herd population in August 2019 was nearly 40% less than August 2018. And, pork demand also has taken a hit, even though ASF poses no threat to human health.

Just how big is China’s pork production? Conservative estimates put one-fifth of China’s production equivalent to all U.S. pork production. Regardless of lower consumption, China still needs to fill gaps in its supply chain. The unfortunate circumstances regarding ASF for China can be a short-term positive for U.S. pork. As China looks to increase breeding and production, it will rely heavily on imports from other reliable suppliers, including the United States. However, the U.S. pork industry cannot rely on that trend alone and must continue to look for additional markets for pork exports to drive steady and increased production.

With 97% of the soybean meal used in the United States going to feed the livestock and poultry industry, U.S. soybean growers and their policy advocates in Washington and at the state level can continue to play an active role in helping animal agriculture. The American Soybean Association, along with state soybean associations, actively monitor challenges in the livestock and poultry industries and provide assistance where needed.