Three Organizations, One Vision for the Future

That vision includes protecting the reputation of American soy and the interests of soybean producers within the legislative and regulatory process; providing increased opportunities for profitability for U.S. producers, both domestically and by advancing U.S. soy globally; and, not unimportantly within that process, providing nutrition for a hungry world.

While these organizations share outcomes for success, they each play separate roles in the effort.

ASA is the advocacy arm of the soybean industry, working on policy development and implementation. USB is the industry’s checkoff program and serves research and promotion functions while it also supports market development. USSEC works to grow the international market for U.S. soybeans by advocating for the use of U.S. soy in feed, aquaculture and human consumption, and promotes the benefits of using soy through education programs.

ASA’s World Initiative for Soy in Human Health (WISHH) complements the work of USSEC by exploring smaller, immature markets to promote the import of U.S. soy for human and animal diets in developing countries.

As we look toward 2019, CEOs from the three organizations offered their thoughts on what’s to come on the topics of trade, market development, technology, sustainability, brand reputation and the importance of collaboration.

ASA CEO Ryan Findlay said trade was the number one issue for the soybean industry in 2018 and will continue to be so in 2019.

In a statement, John Heisdorffer, a soybean grower from Keota, Iowa, and ASA’s 2018 president, said, “If this suspension of tariff increases leads to a longer-term agreement, it will be extremely positive for the soy industry.”

Findlay said the tariffs that China placed on U.S. soybean imports at 25 percent have been devastating for the industry ever since, with a sharp price drop and loss of a major market.

The ASA has been working with the Trump administration to consider removing the tariffs and increasing trade back to original levels.

While the soybean industry waits, U.S. soy representatives around the world have been working to explore alternative markets including historic customers of U.S. soy such as the European Union and Japan, newer markets such as Egypt, plus several in Southeast Asia and the Americas. 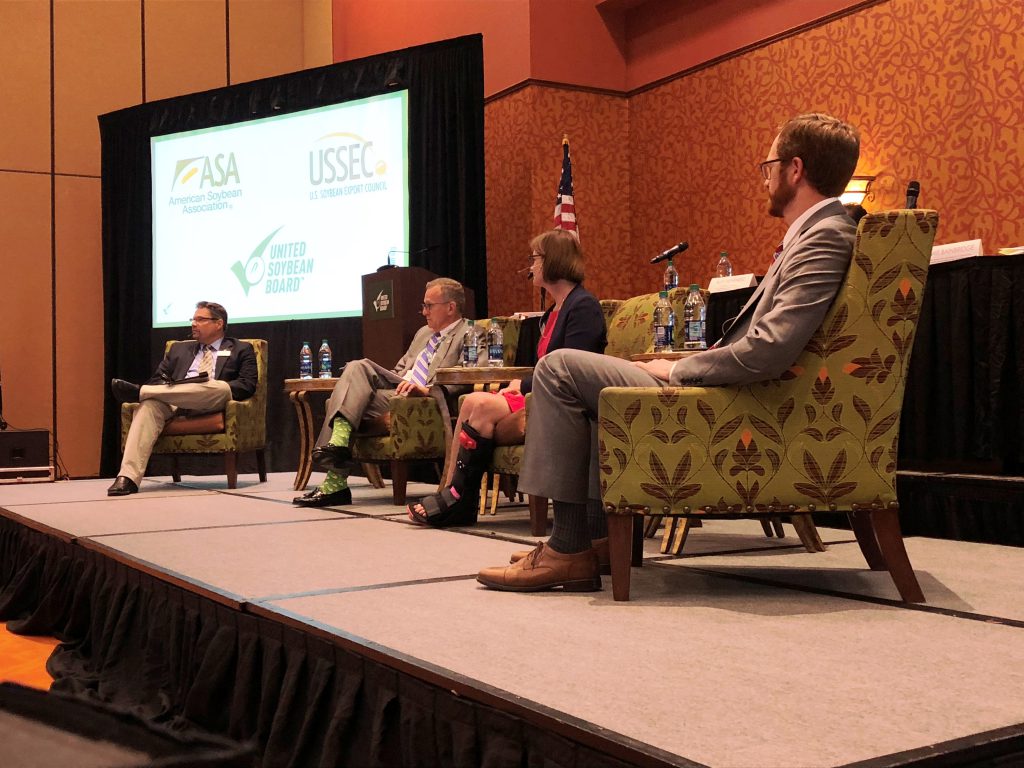 For example, ASA and USSEC recently submitted joint comments and recommendations to the Office of the U.S. Trade Representative (USTR) to inform a new bilateral Japanese Free Trade Agreement.

“As part of the new free trade agreement with Japan, there has been talk about increased demand for animal protein there and how U.S. soy could be used to feed these animals,” Findlay said.

Additionally, ASA is lobbying to make sure the new United States-Mexico-Canada Agreement, or USMCA, passes Congress as the replacement for the previous North American Free Trade Agreement (NAFTA).

“Mexico is a top-three market for U.S. soybeans, so this is important for our industry,” Findlay said. 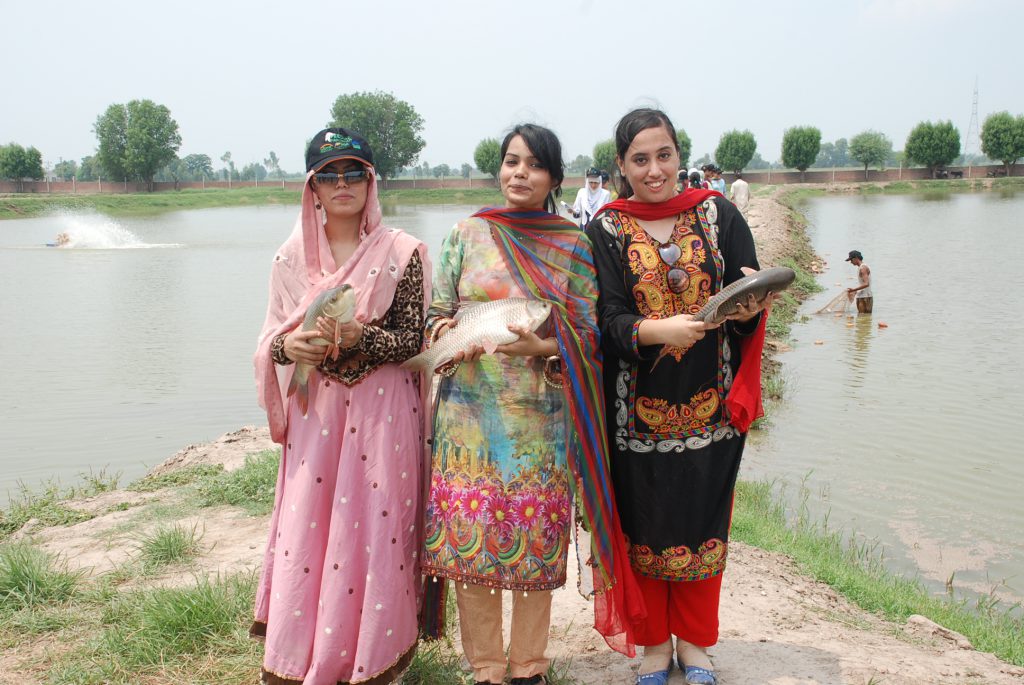 USSEC CEO Jim Sutter said the group launched the “What it Takes” initiative in 2018 to pursue all potential viable markets for U.S. soy to best compensate for volume losses in China.

The goal is to prevent U.S. stock build-ups as much as possible and narrow the price spread between U.S. and other soybean-growing countries.

At networking events, USSEC has shown importers the advantages of buying U.S. product versus from other countries and the sizable export capacity of the West Coast and Gulf of Mexico.

“The tariff situation with China has affected not just our exports to that country, but also global trade flows as Brazil is currently supplying the bulk of China’s needs, making it unable to supply as much demand from other countries,” Sutter said. “The U.S. has stepped into that role, supplying multiple markets, even South American soy producers such as Argentina and Brazil itself with U.S. soybeans, but with a devastating effect on prices.”

As the Chinese market remains suppressed, Sutter said the European Union has been a key market that USSEC is working to grow.

“Now, we’re trying to get that back up to 100 percent,” he said. “This is the second largest market to China for the U.S.”

“We’ve been working there for numerous years, but they have been buying more soybeans total and more from the U.S., as well,” he said. “They like our supply chain and quality, and demand in Egypt is growing along with their poultry and aquaculture offerings.”

Argentina has also been a growth market for U.S. soybeans this year, as the country’s own crop harvested April-June this year was down by a third and they turned to the U.S. to compensate for their shortcomings, Sutter said.

ASA’s WISHH continues to tap new markets and prepare them for USSEC to promote U.S. exports.

Two examples of this are Ghana and Cambodia, Findlay said.

“Both are long-term market development focuses,” he said. “We go into a region and country and work with partners to establish an industry—develop agricultural value chains around protein production, including poultry, aquaculture and livestock.”

Once the value chain is established and demand is created, U.S. soy products can fill gaps where they exist, having created sustainable opportunities for trade, Findlay added.

Sutter concluded by saying, “We work with WISHH to grow global demand. Once WISHH has laid the foundation for trade, we work with local industries to grow export opportunities for U.S. soy.”

“We will continue research in the production area, making sure profitability of soybean farmers is our number one outcome,” she said.

New projects for 2019 will be picked in the springtime, Ruhland said.

In 2019, a prime focus will be on finding new ways to use soybeans including industrial uses such as adhesives, tire rubber, powder coating on metal, and ink for printing, she said.

In addition, research will continue to focus on soybeans as a biofuel source.

“These things we like to find to keep soy moving outside the traditional feed-and-food area,” Ruhland said.

One such emerging technology is high-oleic oil, she said.

“The USB has been involved in a three-to-four-year market introduction of high-oleic soybean oil,” Ruhland said. “The project speaks to end-users directly about the advantages of high-oleic oil.”

These perks include a higher heat point so the oil can be left in the fryer longer, and it has a health profile similar to olive oil.

“This is important, as there have been increased government regulations on trans oils recently,” she said.

Additionally, the USB is working hard to examine how data from soybean growers can best be used to help them improve their businesses.

“We are looking for solutions to help farmers harness the power of data they have—for production decisions—to use for inputs and soil health,” Ruhland said. “We can’t hide from this. Data is one of farming’s greatest strengths.” 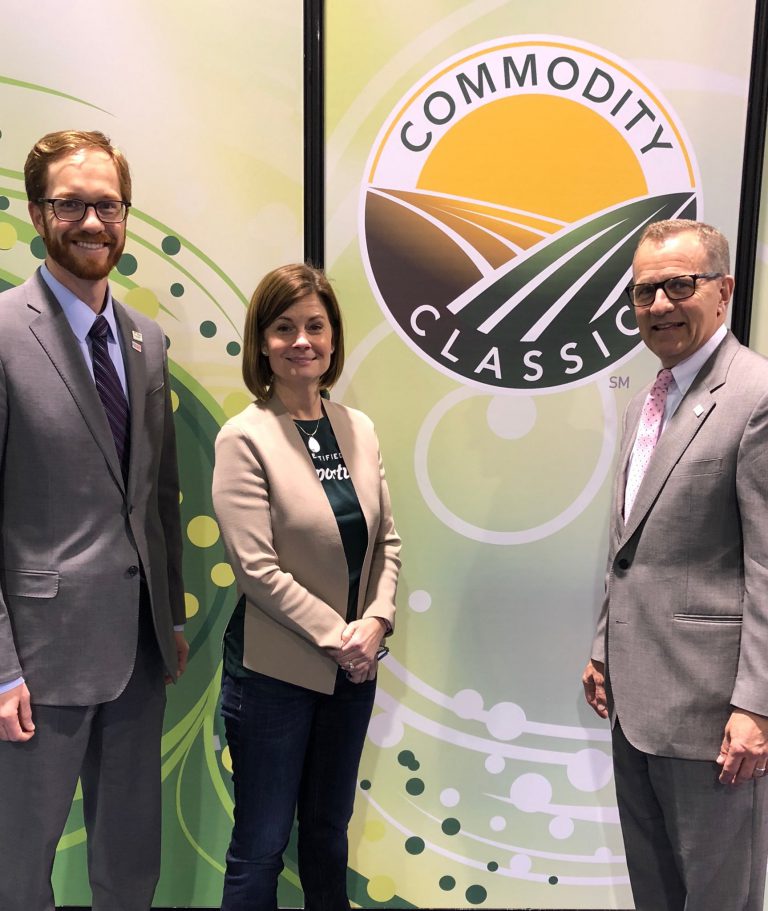 ASA’s Findlay said when it comes to how soybean growers tackle sustainability, it cannot be a one-size-fits-all approach.

“This will be different for different regions and focused on different social, economic and environmental factors,” he said.

Points to address include how to improve conservation on the farm, fertilizer use and increased output per acre.

“Farmers are ready to engage in this,” Findlay said. “We need to help define what sustainability is from the farm level and explain it to consumers and buyers. This has to happen while not creating additional burden on farmers in drastically changing what they are already doing.”

“What is expected is continual improvement,” she said. “The USB sets measurable sustainability standards and looks to help farmers understand how to meet them and get better every year. Farmers have a strong interest in sustainability to keep their farms going for further generations as well.”

USSEC’s Sutter said the group works internationally with buyers and other accreditation groups to make sure governments understand the sustainability of how U.S. soybeans are produced.

“Europe started this call for responsibility—the sustainability movement—about 10 years ago and people continue to care about it,” he said. “It’s a real selling point—more people around the world want to know how their food is produced.”

Sutter pointed to USSEC’s U.S. Soy Sustainability Assurance Protocol, which was introduced about five years ago, he said, as an international verification standard.

And as an example of the success of this effort, Sutter said, U.S. soy was recently recognized by the Tokyo 2020 Olympic and Paralympic Games as food that is grown using sustainable practices. 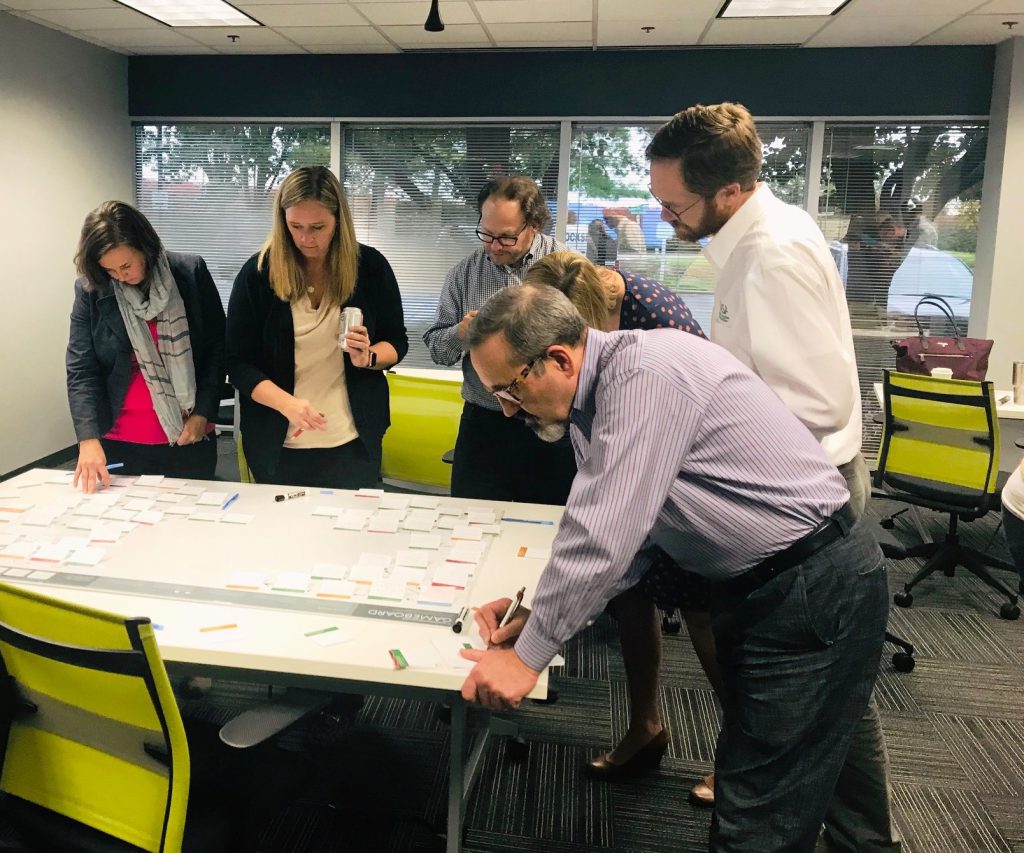 ASA, USB and USSEC staff met in the fall to discuss the U.S. soy brand and ways to collaborate smarter.

USB’s Ruhland said the organization is working on a soybean brand architecture project to better promote the commodity internationally.

“The USB is taking USSEC’s soybean branding and expanding it and deepening its roots domestically and internationally,” she said. “Brand protection is never over. So, we are working hard to put extra resources toward things such as disputing soy myths.”

Another goal of this effort is to differentiate U.S. soy from other origin soybeans in the international market and more broadly, against other plant proteins and feed sources.

Finally, when asked about the importance of collaboration among the three soy organizations, the CEOs touted it as critical to the success of the U.S. soy industry.

ASA’s Findlay: “Whether it’s ASA, USB, or USSEC, we are all here to represent soybean farmers, and those farmers care about growing their commodities in a smart, economic way. Together, we are advancing the needs of our industry by driving key issues forward.”

USB’s Ruhland: “If the three of us stay within our strengths and work together, it’s difficult to find an issue with soy that we can’t resolve.”

And, USSEC’s Sutter: “These are big challenges that the U.S. soybean industry is facing. We are lucky to have each of the three organizations doing its own thing while collaborating to have the best results for the soybean industry.”